It's time to learn how to pronounce another town in Kentucky: Cadiz.

Although it looks like it could have the accent on the second syllable, it's pronounced by the locals to sound like "Katie's."

Geographically, from a Nashville perspective, it's on the other side of Ft. Campbell, so it's not far past Clarksville.

But to the Kentuckians who live there, it's a town with a unique history and role, as the county seat of Trigg County, which is where Land Between The Lakes was formed after the U.S. government built dams on the Cumberland and Tennessee Rivers.

Cadiz is small, just over 2,000 population, but they have lots of spirit. They run the Trigg County Country Ham Festival, which features, among many attractions, the world's largest biscuit.

The WannaBeatles were chosen as their Friday night entertainment at the Trigg County Country Ham Festival.

They were excited about our coming there. Kim Allen, with local radio station, WKDZ, interviewed us a few weeks before the show, with a conference call we took at Dennis's house. She interviewed us again after we arrived, during their live coverage of the festival.

On October 9, John Lennon's 75th birthday, we drove up in two cars, Dennis and me in his Camry, and Nathan and David in Nathan's van.

We were greeted at the Cadiz Fire Department by Kerry Fowler, who led us to the parking area behind the stage. 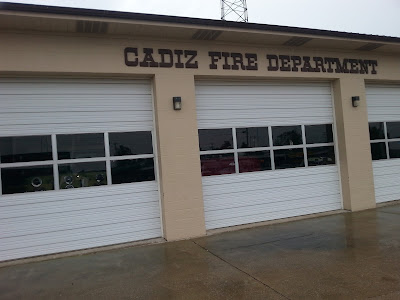 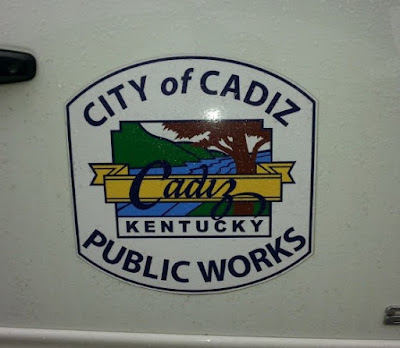 Dennis and I discovered after we arrived at the stage that David had been on the phone to his family in Florida, where he learned his father was dying. This was a major life event to deal with in the middle of a normal job, and it brought a layer of sadness to an otherwise enjoyable day.

As we went through the motions of loading gear (with townspeople assisting,) getting interviewed for the local radio station, and posing for photos on the statue of a pig, David was absorbing the weight of the news, while finding moments to talk to family members and investigate airline schedules,  to plan a trip to Florida as soon as possible.

Knowing what was going on for David that afternoon explains why he looks a little distracted in the photos. As it turned out, he found a flight out of Nashville early the next morning, but his father died before he could get there. He spent the next week in Florida for the funeral and to be with his family, which meant we had to find another drummer for a few gigs that couldn't be avoided, and that's another story, coming up in another blog.

But meanwhile, back in Cadiz, we met WKDZ radio personality Kim in person, as she interviewed us on the street for their local coverage of the event. 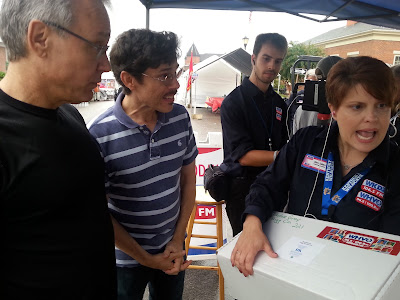 David, Nathan and Kim at the WKDZ tent 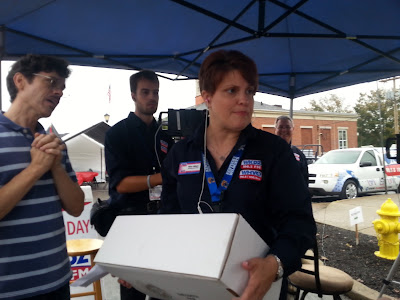 Nathan enthuses as Kim offers The WannaBeatles their prize 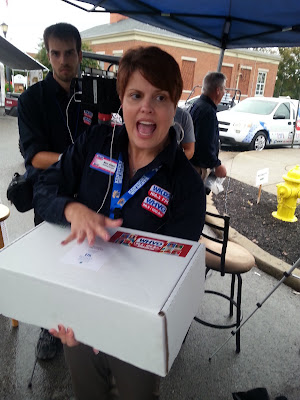 Kim offering us a free ham 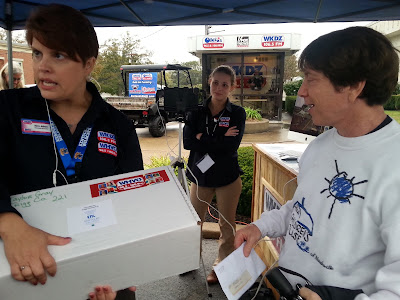 Dennis found a great opportunity for his unique wit, calling the free ham "The Jewish Dilemma." That made David laugh.

We were dealing with rainy weather, but there was a cover over the stage, so the only question was whether the audience would get rained on. 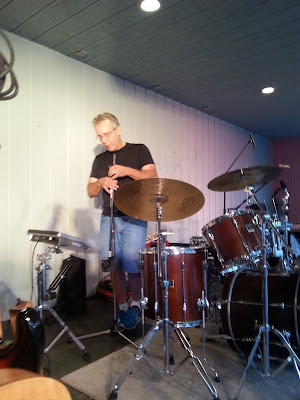 David setting up his drums 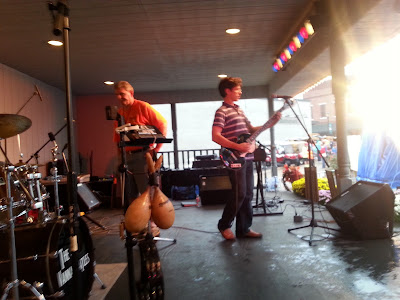 Nathan with his Hofner 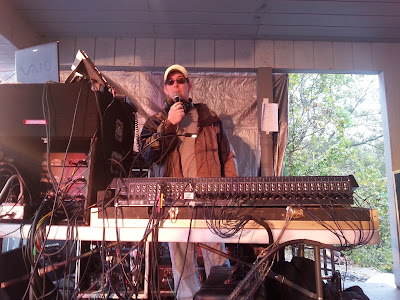 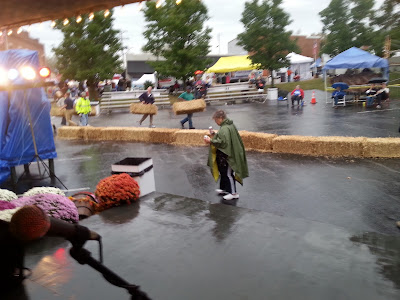 Installing hay bales in the rain

We were impressed with the energy of the people of Cadiz.
(insert street sign, city hall) 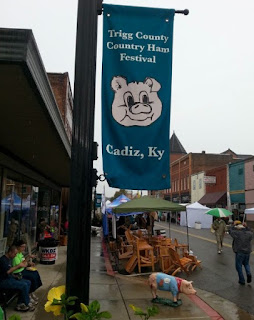 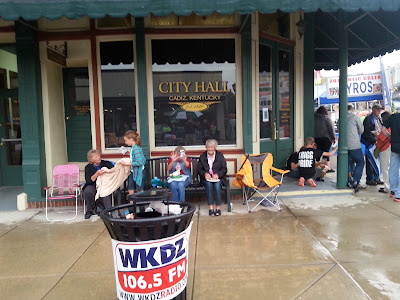 City Hall, which also served as our dressing room

And we were treated with great hospitality. 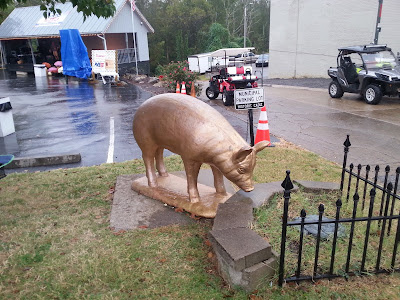 During Ham Festival, there are plenty of images of pigs around town, but this golden statue near the stage seemed to be the most distinctive. 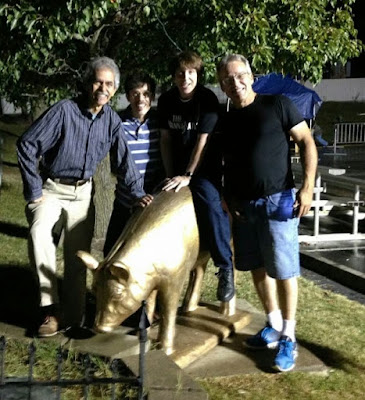 The WannaBeatles posed for a final goodbye on the golden pig before saying goodbye.

As a followup, I had left my ear plugs on the stage that night, and Kerry made the effort of contacting me and mailing them back to me. In that package, he also included special maps and brochures of Cadiz, and an official Key to the City. 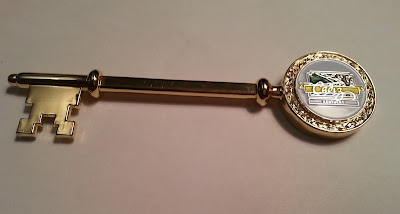 The WannaBeatles have never received a key to any city before. It made us feel like Dorothy at the end of the Wizard of Oz. Now you see why we will be happy to return to Cadiz, whether it's for another Ham Festival or just an ordinary day.

Thanks to Kerry Fowler, of the City of Cadiz, and Kim Allen, of WKDZ radio, for your hospitality. You really made us feel at home.

Posted by The Wannabeatles at 5:10 PM No comments:

The classic question for bloggers is Quantity or Quality?

Do we put out an abundance of blogs, keeping people supplied with fresh material on a daily basis? Or do we take our time, carefully considering each word that enters the blogosphere, because we treasure the time, energy and attention of our fans?

Or is this big question a smokescreen, hoping to keep you from noticing that our blog has brought you neither Quantity nor Quality?

Well, in any case, some of our shows do not have a large number of photos connected to them, and this blog is a good example of a short one. And one that's long overdue.

On September 24, The WannaBeatles did a special show for Meryl Kraft's retirement party at the Gordon Jewish Community Center.

We've played plenty of shows at the JCC over the years, and we appreciate all the energy Meryl brings to the place.

That makes us wish we had a photo to illustrate her ebullient personality and the fun we had playing at her party, but you'll have to use your imagination.

The one breakthrough the WannaBeatles experienced at that particular gig was the introduction of an official "RocknRoller" cart that has finally been acquired by WannaBeatle Bryan. 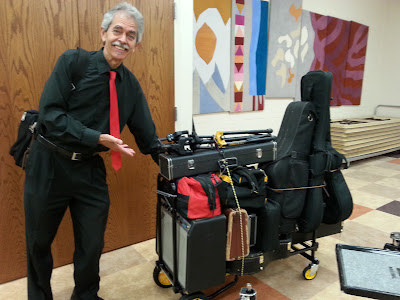 All the other WannaBeatles have been using these clever carts to haul their gear all these years, and wondering why I couldn't get with the program. Maybe it was the challenge of finding space on top of all the other gear to load the folded up cart into the car. Maybe it was the expense. It was probably just laziness - an odd excuse, since getting the cart makes life easier, whenever gear needs to get from a car to a stage, which is every time we play.

But The WannaBeatles overcame my resistance the best way they knew how:  through the Good Yoko.

Holly consulted with the boys, and bought exactly the right size RocknRoller for my birthday, which was the day before we played the party for Meryl. So I embraced the challenge of fitting all my WannaBeatles gear onto that cart, held in place by a bungee cord or two - following in the footsteps of my bandmates, who've been dealing with these practical issues for years.

Thanks David, Dennis, Nathan and Holly for the cart! and congratulations, Meryl, on a wonderful life with so much activity at the Gordon JCC.


Posted by The Wannabeatles at 11:18 PM No comments: