Life with the WannaBeatles often centers around what's going on at Dennis's house. It's where we rehearse (usually), where we record (mostly), and where most of the gigs get booked. Dennis often answers the phone "WannaBeatles Central."

Yesterday we rehearsed at Dennis's house, and recorded, and came up with a new song idea based on yet another witticism of Dennis's (more on that later) but we also spent time preparing for Ryan's Bar Mitzvah.

Dennis and Lori have been married long enough to have a son who's 13, which is the age for the traditional and joyful Jewish ceremony marking the passage to manhood. 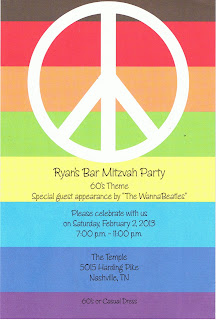 As the illustration indicates, Ryan's party has a sixties theme and features The WannaBeatles. As it turns out, Ryan has been playing drums for a few years, and the Beatles' "Come Together" is one of his favorites.

From the archives, we have a 2009 video of Ryan, playing "Come Together" on his drum set, before the WannaBeatles ever learned the song.

That's Ryan's drum kit, which David plays for our rehearsals. And now it's 2013, and as we prepare for the party, we prepare for Ryan playing drums with us. And that means subjecting Ryan to the rigorous teaching discipline of WannaBeatle Dave, who earns a living by turning children into serious musicians. (We'll be advertising his services later, but for now let's resume the story…)

At rehearsal yesterday, David was all over Ryan like a drill sergeant on a new recruit. He had the metronome running at full blast, barking at Ryan about stick height and posture, volume and timing - getting him to practice playing triplets repeatedly at slower speed, gradually increasing for accuracy. It was full scale drum pedagogy in action, all administered in love, although the student didn't look like he was loving it.

But Ryan sure is sounding good! And who wouldn't, with David's enthusiastic coaching. So we're really looking forward to playing at the party next weekend.

Of course, Dennis is the father of the Bar Mitzvah candidate, so he can't spend the whole evening as a musician. He's dividing his duties between being a WannaBeatles, on the special night his son plays drums with him on a classic Beatles song - and being a dad, hosting a party with his wife, on behalf of his son.

So we'll have part of the evening as a "normal" party band, with John England - one of our favorite local musicians - sitting in as band leader, while Dennis covers his social duties. And, as is the custom at a Bar Mitzvah, we will play traditional Jewish songs, like "Hava Negila." We spent some time at rehearsal going over those songs, anticipating playing them without Dennis at the party next Saturday.

Nathan was a great sport, setting up a nice accordion sound on his keyboard, and reading through the charts without a hitch. David played drums, and sang along enthusiastically, saying it brought back memories of all the Jewish weddings he played down in Miami, before he moved to Nashville.

I was a good sport in my own way, attempting to play the clarinet which I only started about three weeks ago, and still sound like a sick calf. It's not as daring as it sounds - the clarinet is very similar to the sax, which I've been playing for decades, but the ways in which it's different from the sax are difficult to get used to - which is what makes me sound like a sick calf. It's my goal to refine my technique up to a passable level of competence by next Saturday.

You can see a brief demonstration of the clarinet in its new WannaBeatle context in a recently posted video on our youtube channel, which was done at Dennis's house. The clarinet provides an authentic sound for "When I'm 64."

Here's the link:
http://youtu.be/w_dFoTOYq_0
The other part of yesterday's rehearsal was working on our new album. We put some background vocals and percussion on "Louise" (more on that later, and the story behind it, about George Harrison's sister, who worked with us on our Grammy nominated CD - I'm telling you, there's never a dull moment in this band.) And we did a cool edit on our sixties-style instrumental "License To Spy," which may have a new title very soon, probably in Spanish.

Stay tuned. We'll be full of fresh news and songs and other items for your enjoyment.

-Bloggin' Bryan
Posted by The Wannabeatles at 11:13 AM 1 comment:

This is an exciting time for The WannaBeatles.

First of all, this is our first blog, so please make yourself at home. Welcome to the news straight from the WannaBeatles mouth, and may you continually return to be refreshed and revived. Remember, you have a role to play, and this is a relationship, so the ultimate beauty contained herein is in our hands - you, the reader, and we, the blogger, and all the ships at sea. Your responses will affect the direction, so think of it as a collaboration.

We just had a great week. The biggest  event was probably our Betty White Birthday Bash at 3rd & Lindsley. It was our first time to play that venerable club, and it was a blast. This photo capture the solo during "Can't Buy Me Love" which had me kneeling at the front of the stage with lots of screaming fans gathered around, raising their hands to express their enthusiasm. A great moment! 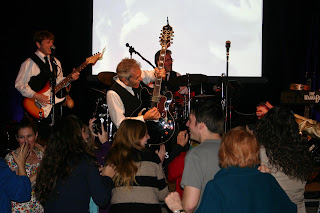 We had a birthday cake for Betty, celebrating her turning 91. Can you believe it? WannaBeatle Nathan took the time to scour youtube for clips of Betty in her earlier show biz glory, from What's My Line through Johnny Carson skits and plenty of Golden Girl episodes, so that we all got a crash course in what a cool lady Betty is.

Our show included our lovely Betty White Look-alike Evelyn Ford, the Betty White dancers, a screen behind us to show videos during various songs, a few extra guests onstage, and a camera crew from WKRN Channel 2. We were on the news that night!

Since the Good Yoko and I don't own a tv, we didn't see it, but according to WannaBeatle Dave, Dennis and I are "all over it." Someday soon we may get a DVD from Channel 2 containing that clip.

The next night we played at Puckett's in Franklin, another cool place. It was sold out, and we had tons of fun, as did our fans.

The next day we had a showcase at the Tennessee Association of Fairs, which was a chance to let people hear us who run all the county fairs across the state. We were sponsored by an agency that's actually in Ohio, called Variety Attractions, who came to Nashville for the convention. We had 30 minutes to demonstrate our stage show, which meant taking many Beatle songs and reducing them to under two minutes (usually by skipping a verse and a bridge). The Variety Attractions agents treated us to lunch and a very educational conversation about the nature of the fair business. We had a good response, so we look forward to getting some gigs at fairs around the state later this year.

Meanwhile, we're working on a new album. We have lots of original songs, and we'll be happy to tell you all about them,  and how we wrote them.  We also have ideas for a series of youtube videos explaining how we play each Beatle song. We have tons of ideas, and we're very happy to share them with you.

So that's it for now. Welcome to the first blog. Come on back soon. We look forward to it.