The WannaBeatles recently played a party in Savannah, Ga., at the home of Janet Barrow, cousin of WannaBeatle Bryan. The Beatles song "When I'm Sixty-Four" was the inspiration for this birthday party which was also a large family reunion.

Janet is one high energy woman. She may be turning 64, but she looks half her age and still runs circles around most teenagers.

And so the party in Savannah in 2015 was another family gathering, with even more cousins and siblings showing up. Again, Joe and Emily came, and again we played "In The Mood" as they danced.


In preparing for the trip, The WannaBeatles considered several options, finally deciding to rent a pickup truck with a trailer hitch, a Toyota Tundra with a powerful V-8 engine. WannaBeatle David was our designated driver, and he was happy to drive such a powerful truck. He got us to Savannah ahead of schedule.

Janet and her husband Charlie built a wonderful house that borders the marsh on Isle of Hope, a few miles southeast of Savannah. 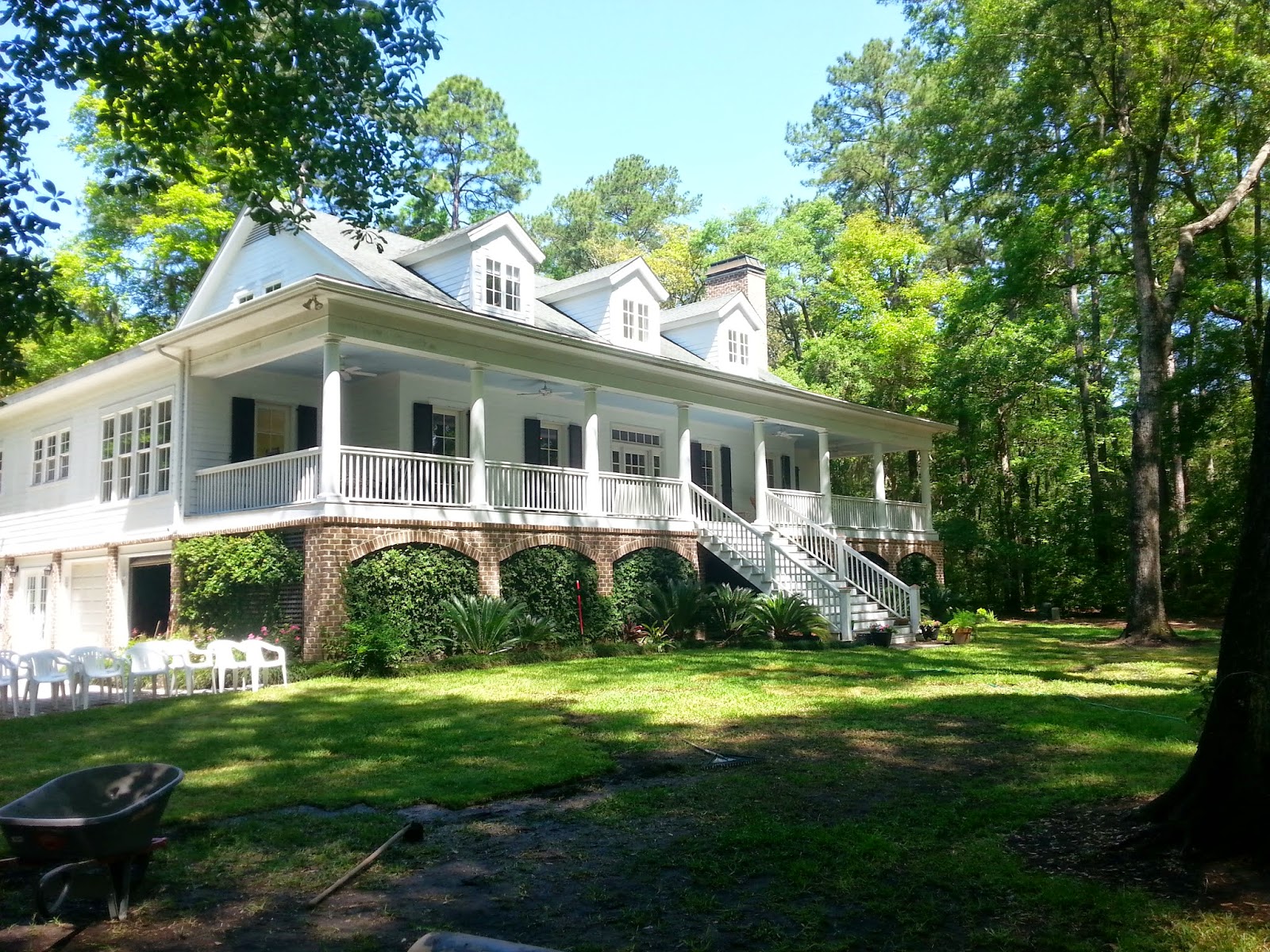 There are enough extra bedrooms upstairs and downstairs to provide us with very comfortable accommodations. To keep things interesting, they also have a pet rabbit, named Mrs. Peterson, running around their house.

We arrived on Thursday night, for Friday's party. Charlie had bought both Mexican and Chinese take-out for us to eat. We sat around a table on their front porch telling our WannaBeatle stories so Janet could get to know us better, which she was happy to do.

The next day was relatively easy, rising after sleeping enough, having coffee, enjoying the sunny weather and beautiful setting, deciding on a place to set up (the patio beside the house,) then visiting a local cafe for crab cakes. Dana Archer, sister of Good Yoko Holly, lives in Savannah, and come over to meet us, and joined us for lunch. 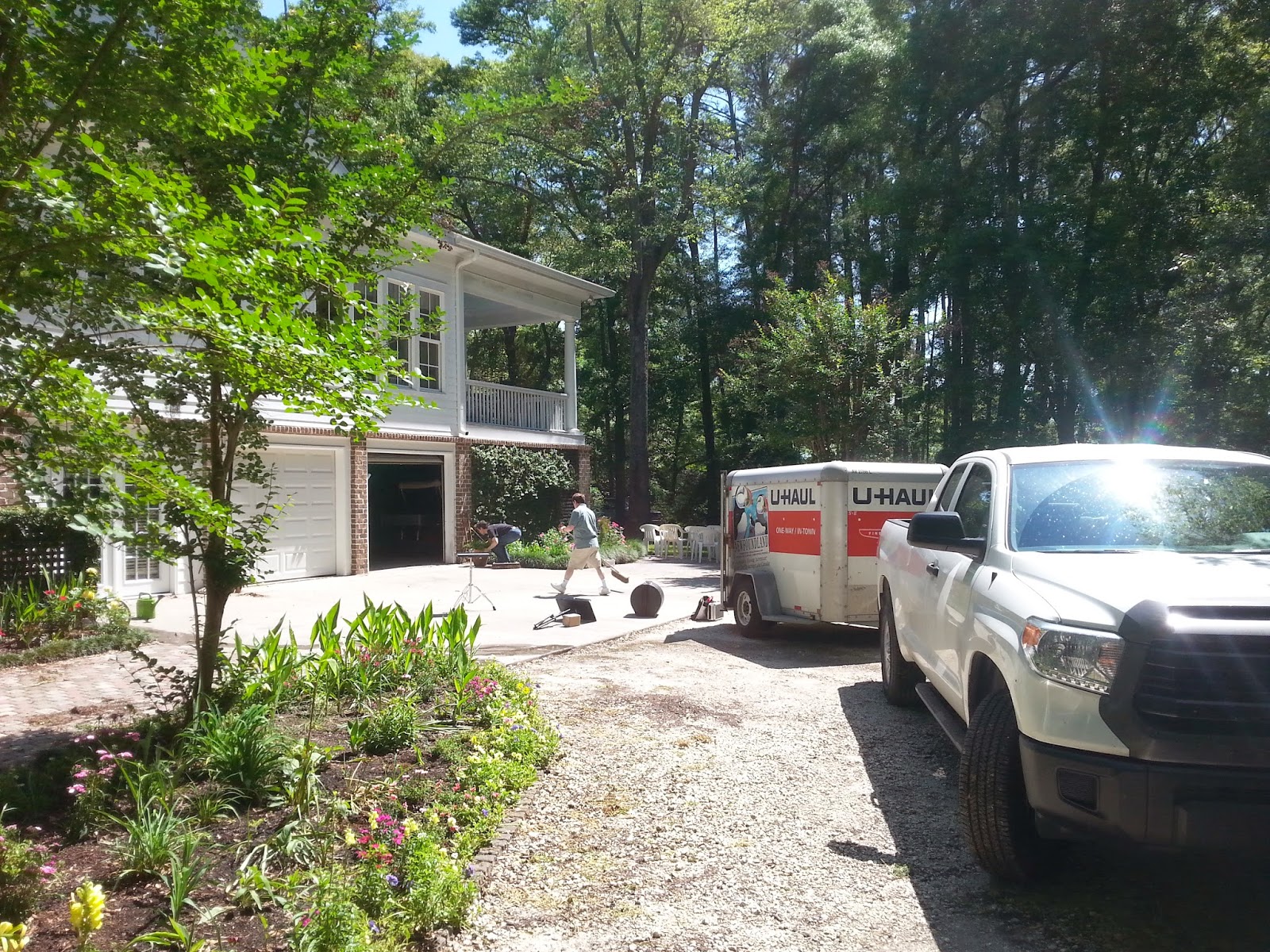 Moving the trailer into position. 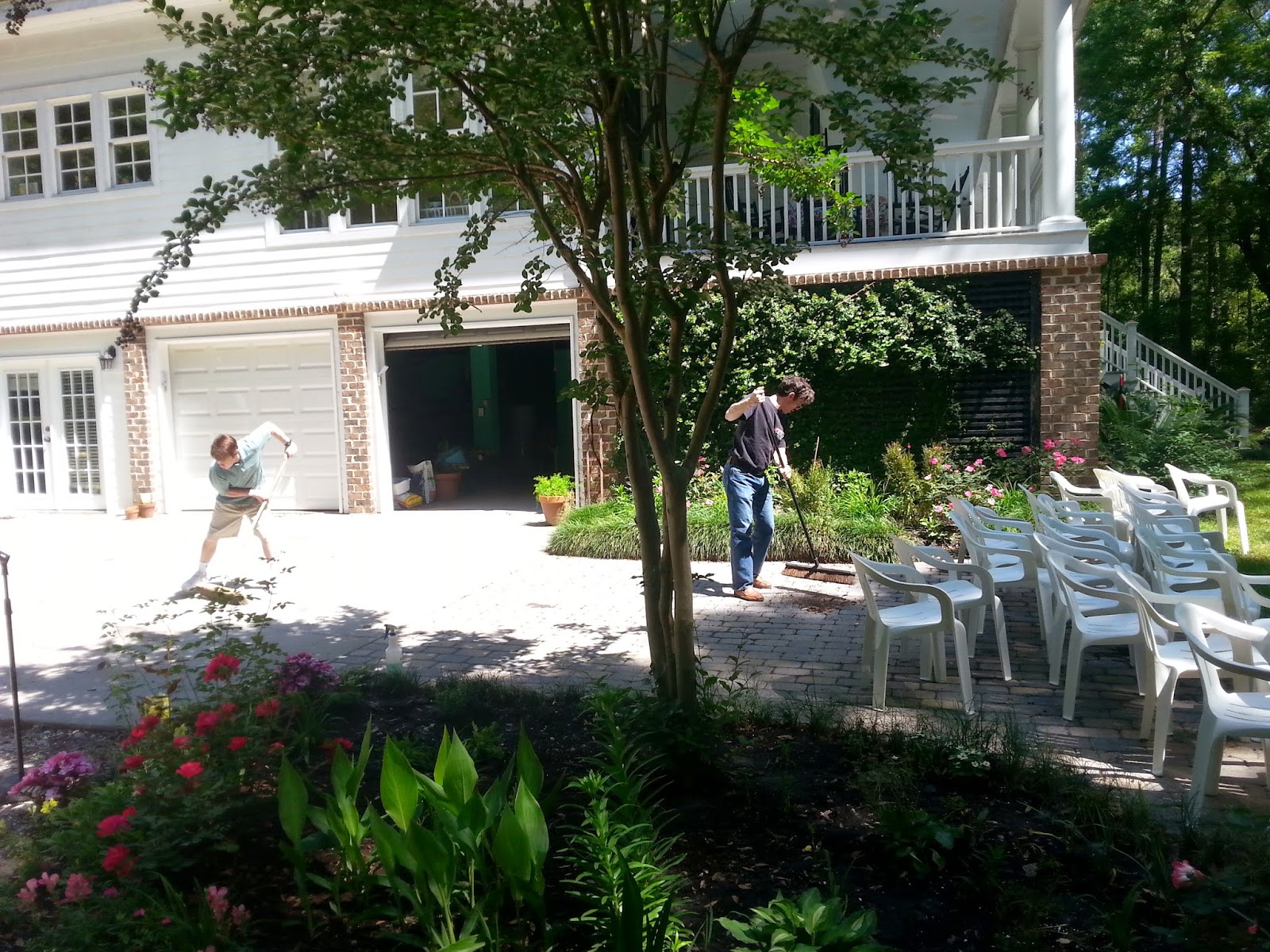 Dennis and Nathan sweeping the patio 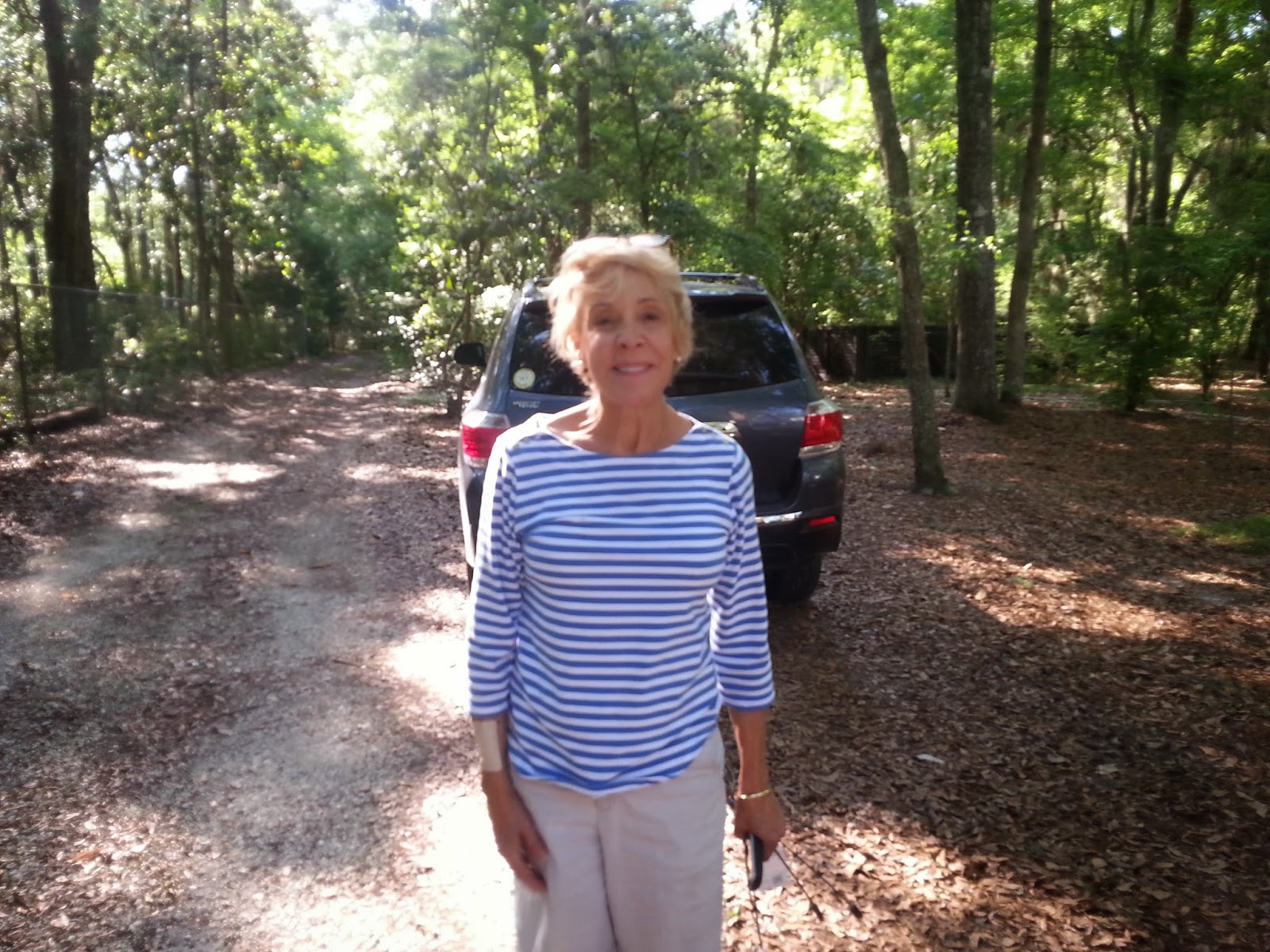 Janet, our  hostess with the mostest, on the day of the party 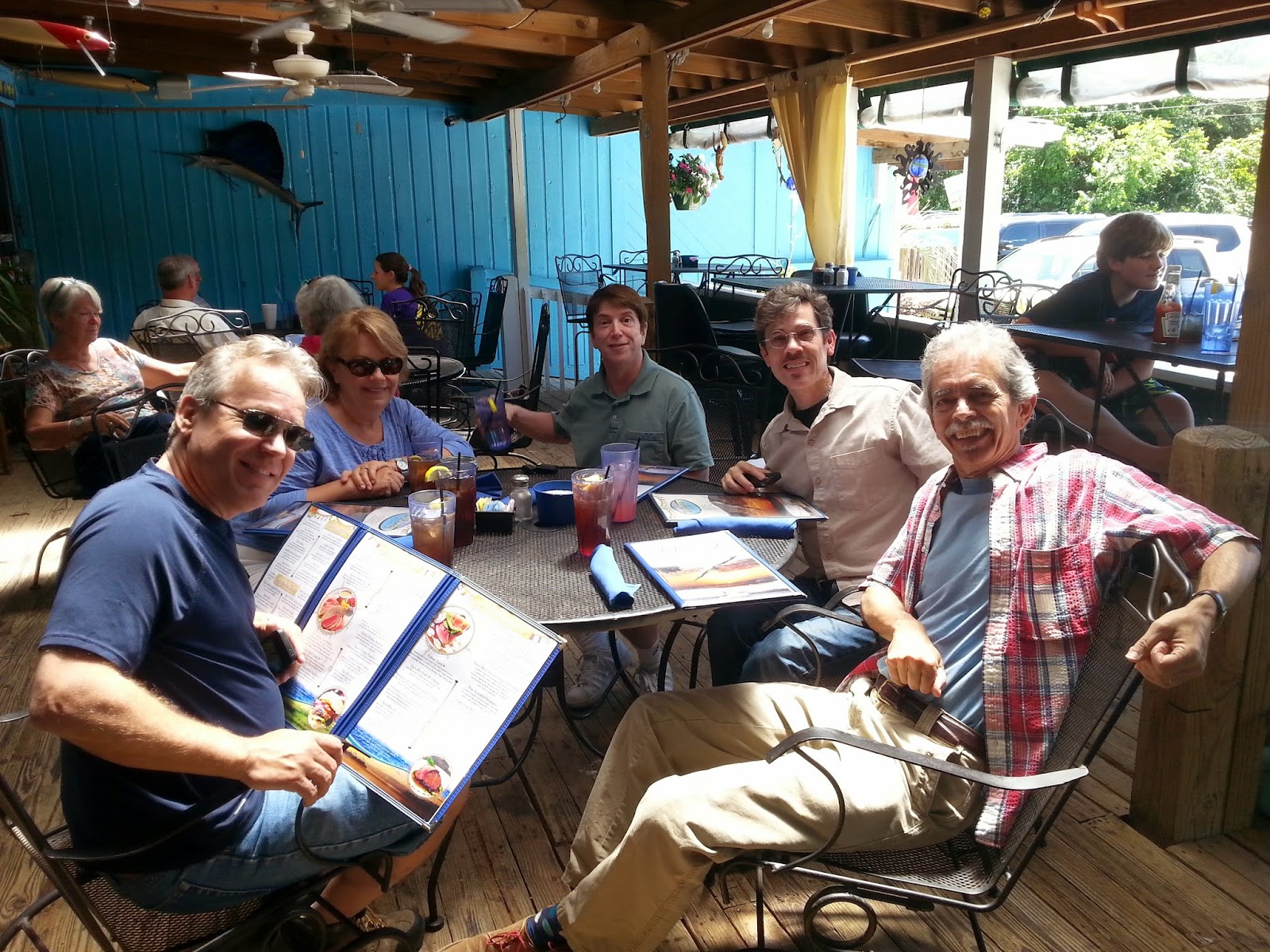 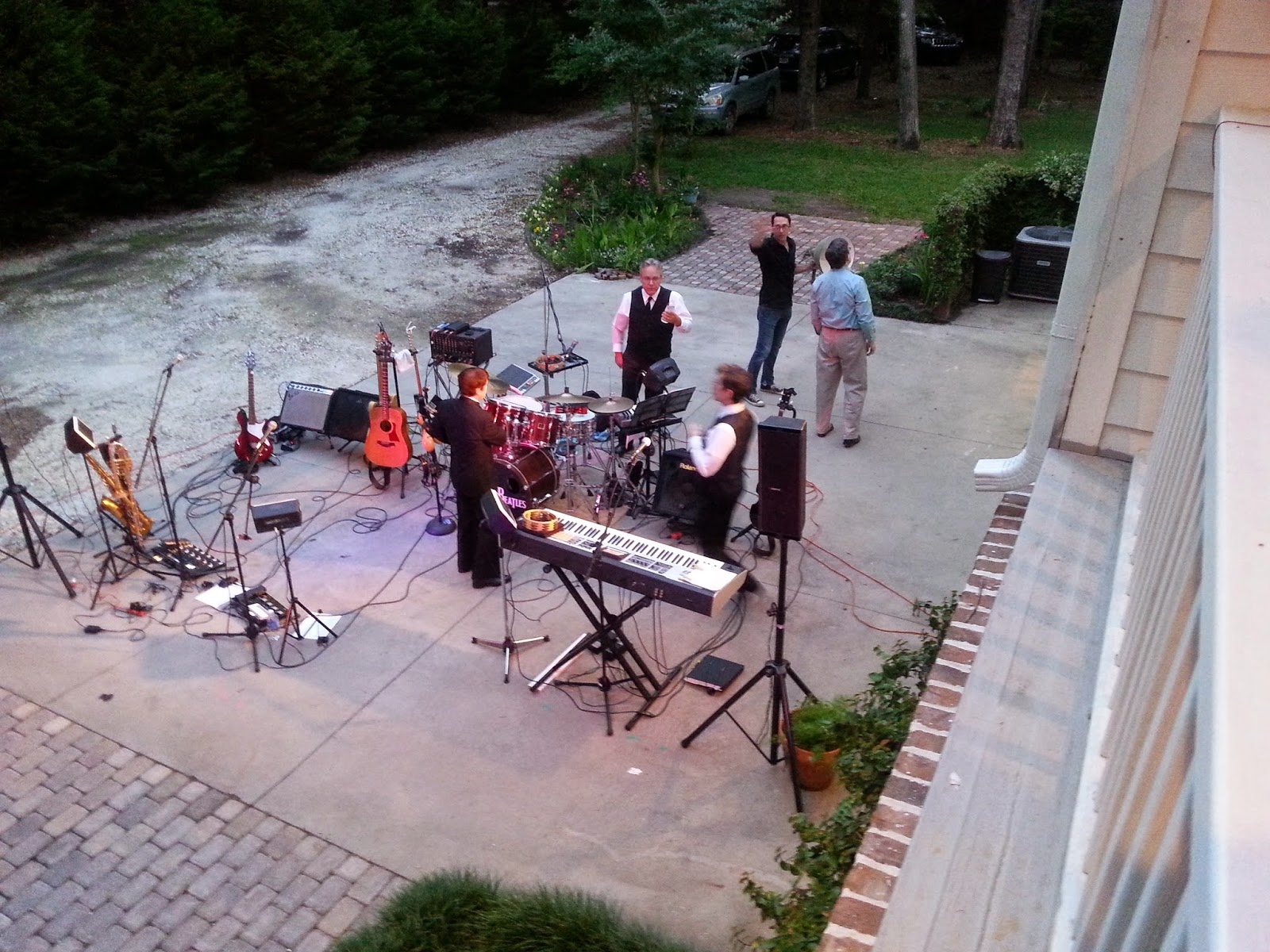 The view from the porch:
WannaBeatles set up on patio,
Charlie and his son Thomas view the scene.

The music started around 8 pm, and the guests circulated from the house and porch to the yard and patio, enjoying the music, dancing, eating, catching up with each other.

There were plenty of big moments. Both of Bryan's brothers were there, and got onstage to sing or play different songs.
Brother Walter sang on "Ticket to Ride," and Brother Doug played sax on the James Brown song "I Got You (I Feel Good)" and "In The Mood."

And of course our guest of honor, cousin Janet, joined us to sing "When I'm Sixty-Four."

WannaBeatle Bryan was among his people, family members who live in Georgia, North Carolina, and Virginia, all gathered this night in Savannah, so there was lots of catching up to do.

And the next morning, WannaBeatle David again assumed the duty of driving the big Tundra, and got us back to Nashville safely and quickly.

The WannaBeatles will never forget cousin Janet. We had a great time.

Bloggin' Bryan 28April2015
Posted by The Wannabeatles at 5:42 AM No comments:

We've played on that stage before, a professionally equipped theater, and we've enjoyed the hospitality the JCC always offers.

Our show was advertised with a poster they displayed on a video screen in their entrance lobby. 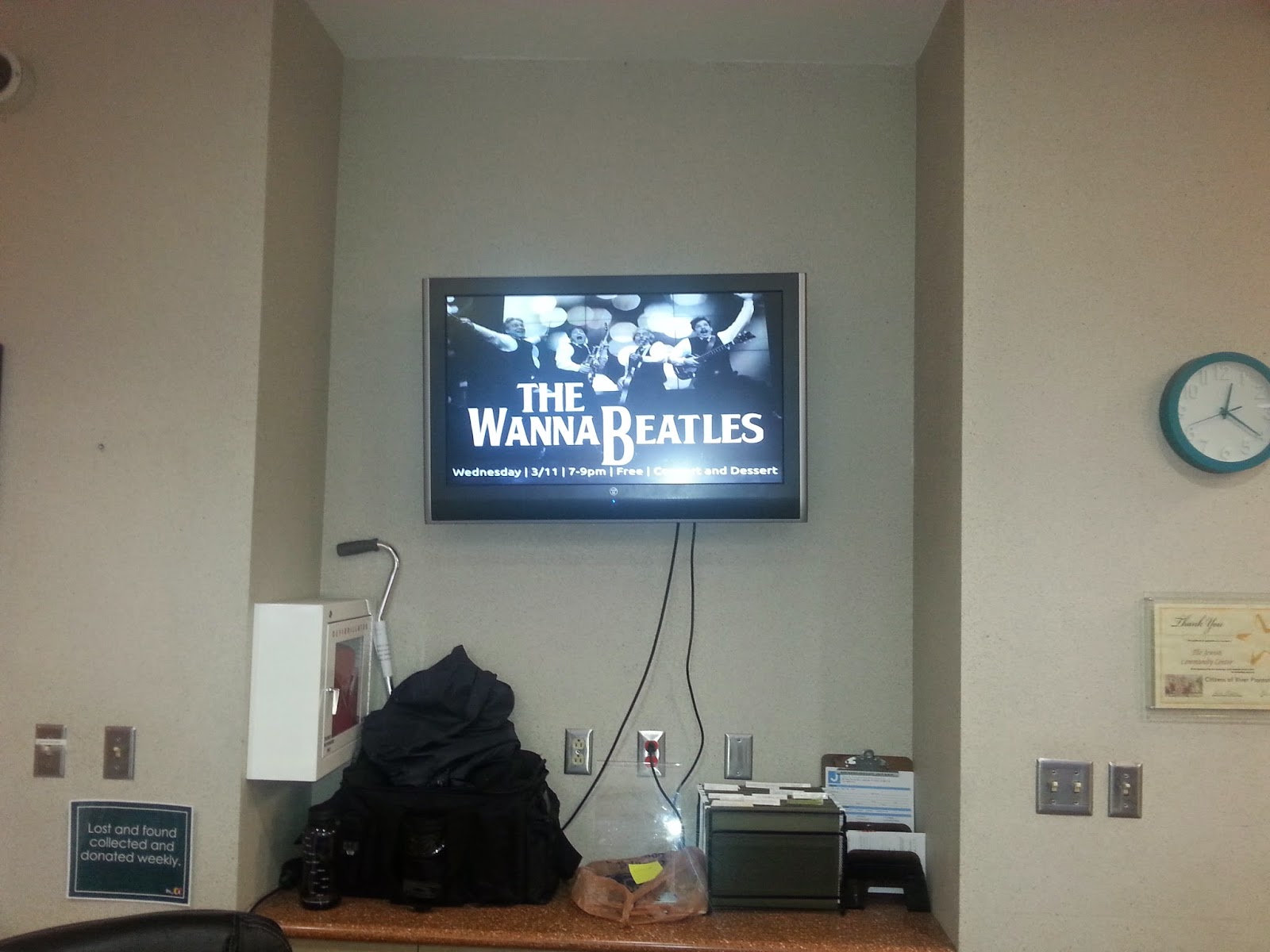 The JCC is a community resource serving all ages, so our audience was a mixture of old and young.

It also turned out to be an international audience, as we met some new fans after the show. 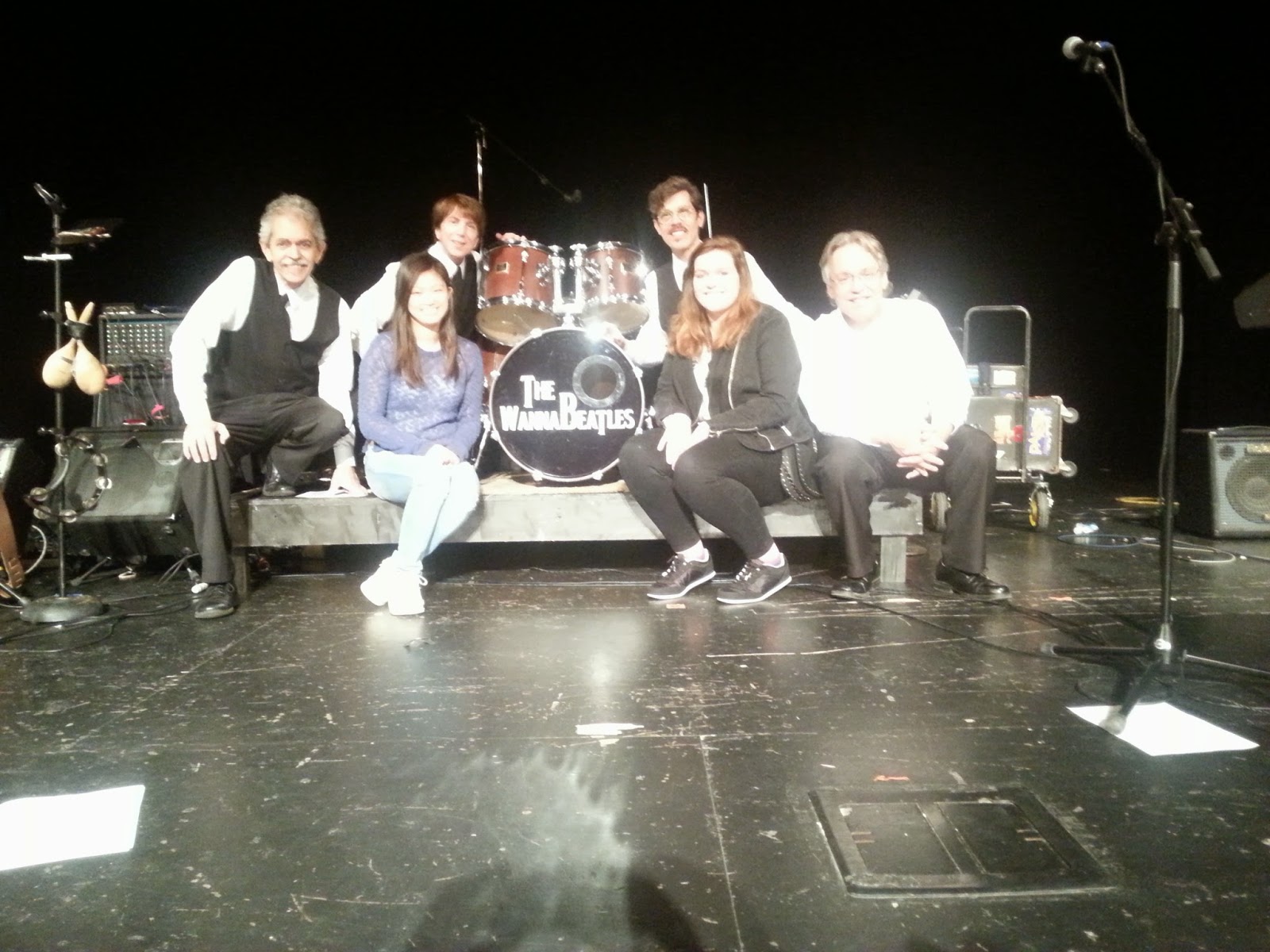 We had a photo taken onstage with our new friends, Sakura from Japan, and Marie from Germany, both of whom are attending Brentwood High School.

It's exciting to realize that people from all over the world come to Nashville, and that we can be part of their musical experience.

If we had more photos, there would be more to tell. If it's longer blogs you like, there are plenty of those within these archives. Or maybe a short blog really hits the spot.

Posted by The Wannabeatles at 4:40 AM No comments:

But, wait, there's more! Yes, even more photos have been discovered, and rather than insert them into the already too large Florida blog, Bloggin' Bryan will have mercy on our readers and post a new small blog with a few choice photos that add new flavor to our Florida trip.

Of course, the Florida trip was a major homecoming for WannaBeatle David, who grew up in Key West and Miami. The concerts we played were a collaboration with the South Florida Symphony Orchestra, directed by Sebrina Alphonso, who attended high school in Key West with David.

In addition to Sebrina, there are many other friends and places that have importance in the life of WannaBeatle David, and many of them are pictured here.

To keep it chronological, we'll start with the meeting at the Woodfield Country Club on our first morning in Boca Raton, when we were entertained by the stories of Jeff Richman.

Here we are by the pool. 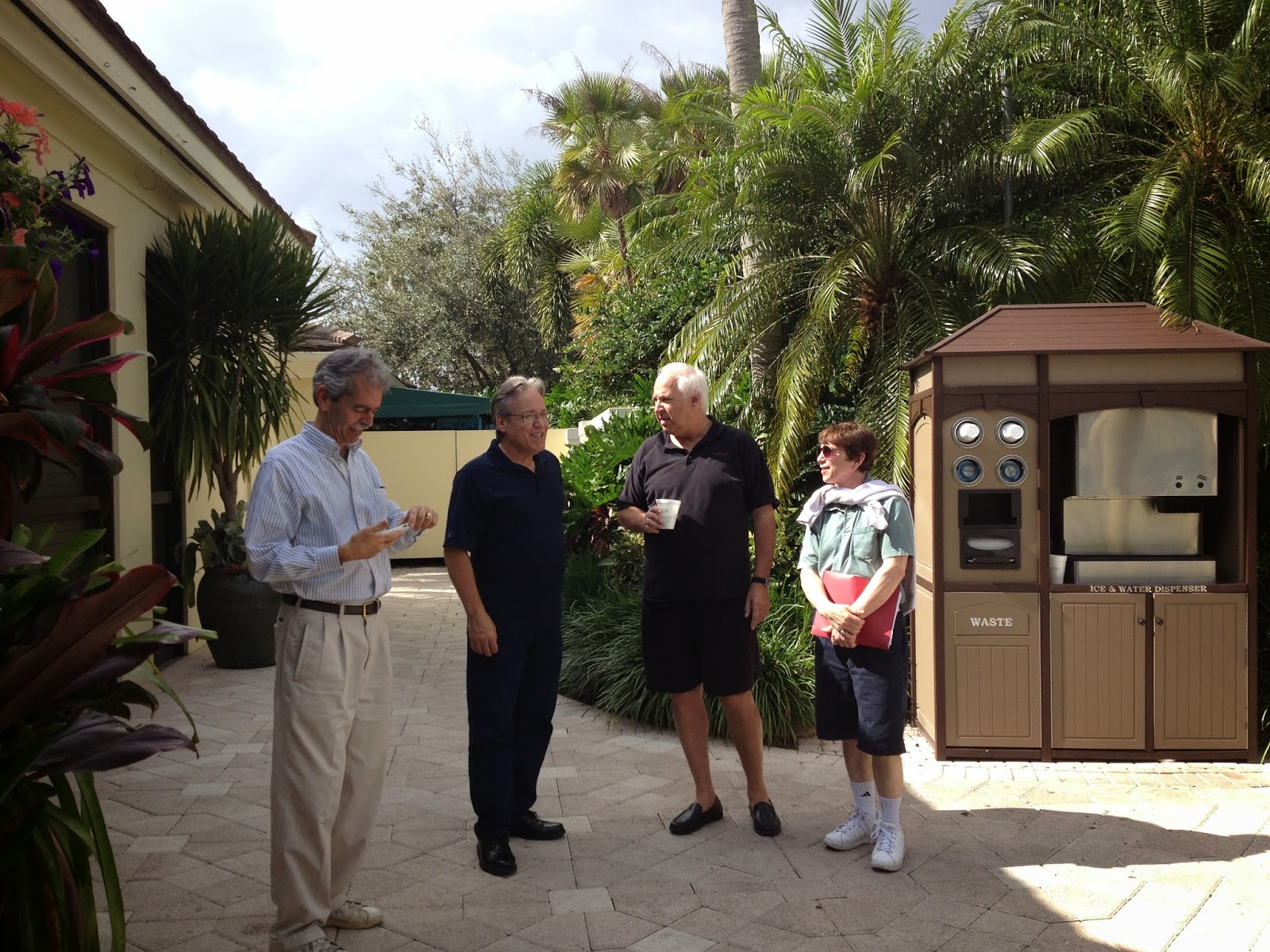 And here's the lovely pool. 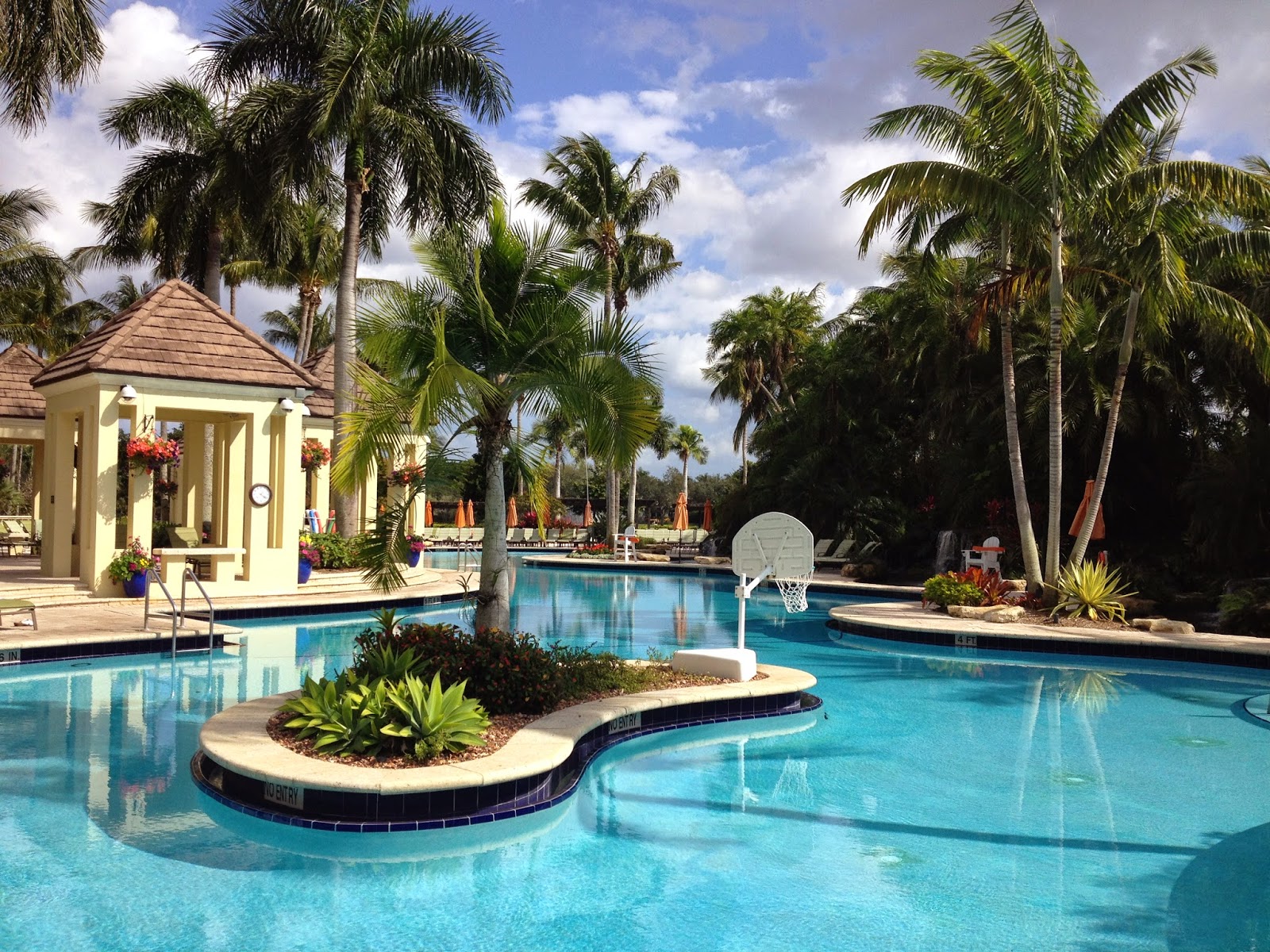 And here's our gathering on the patio. 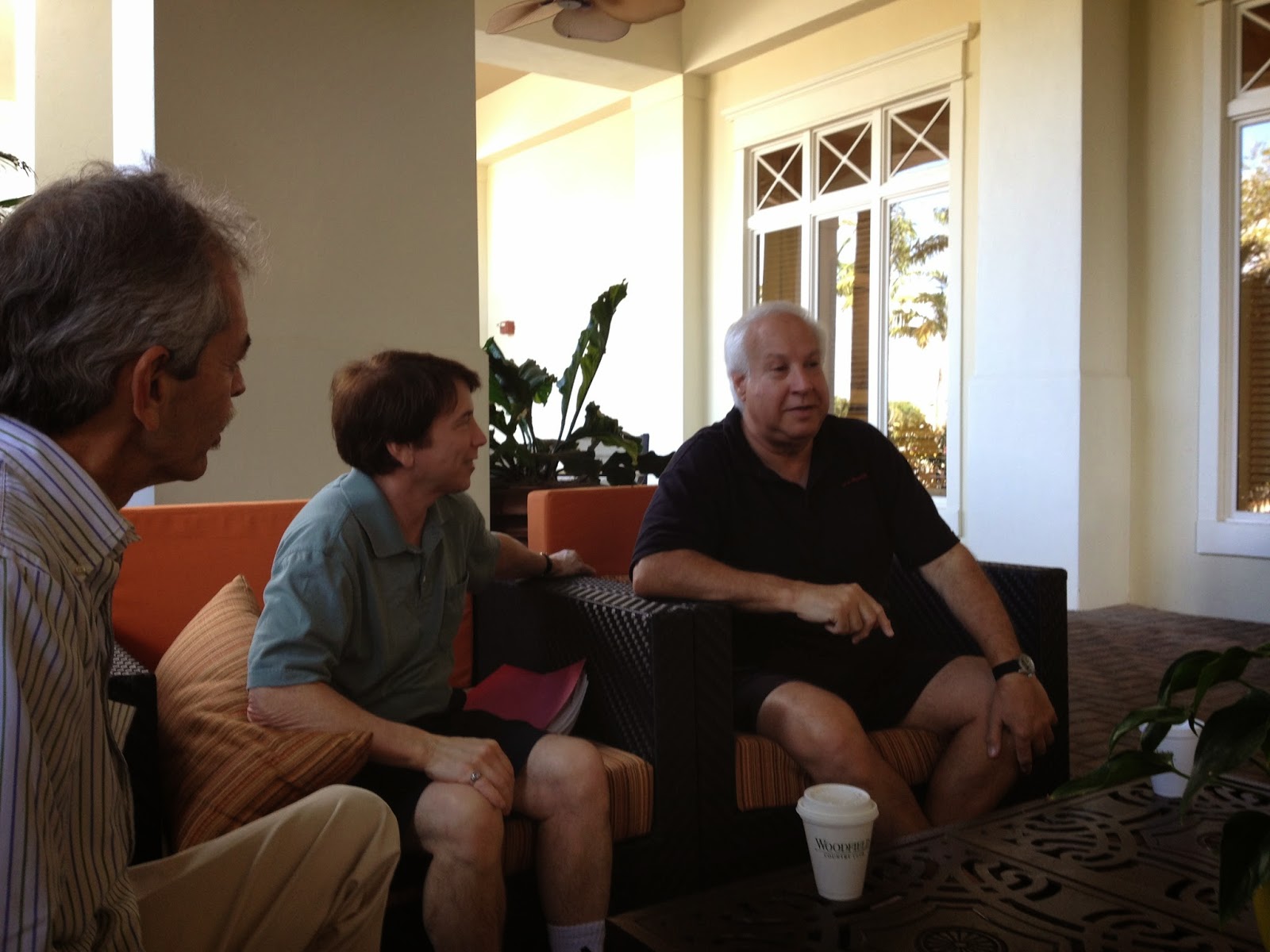 That was a slice of Boca Raton, but David really connected with his roots during an evening trip to Miami. 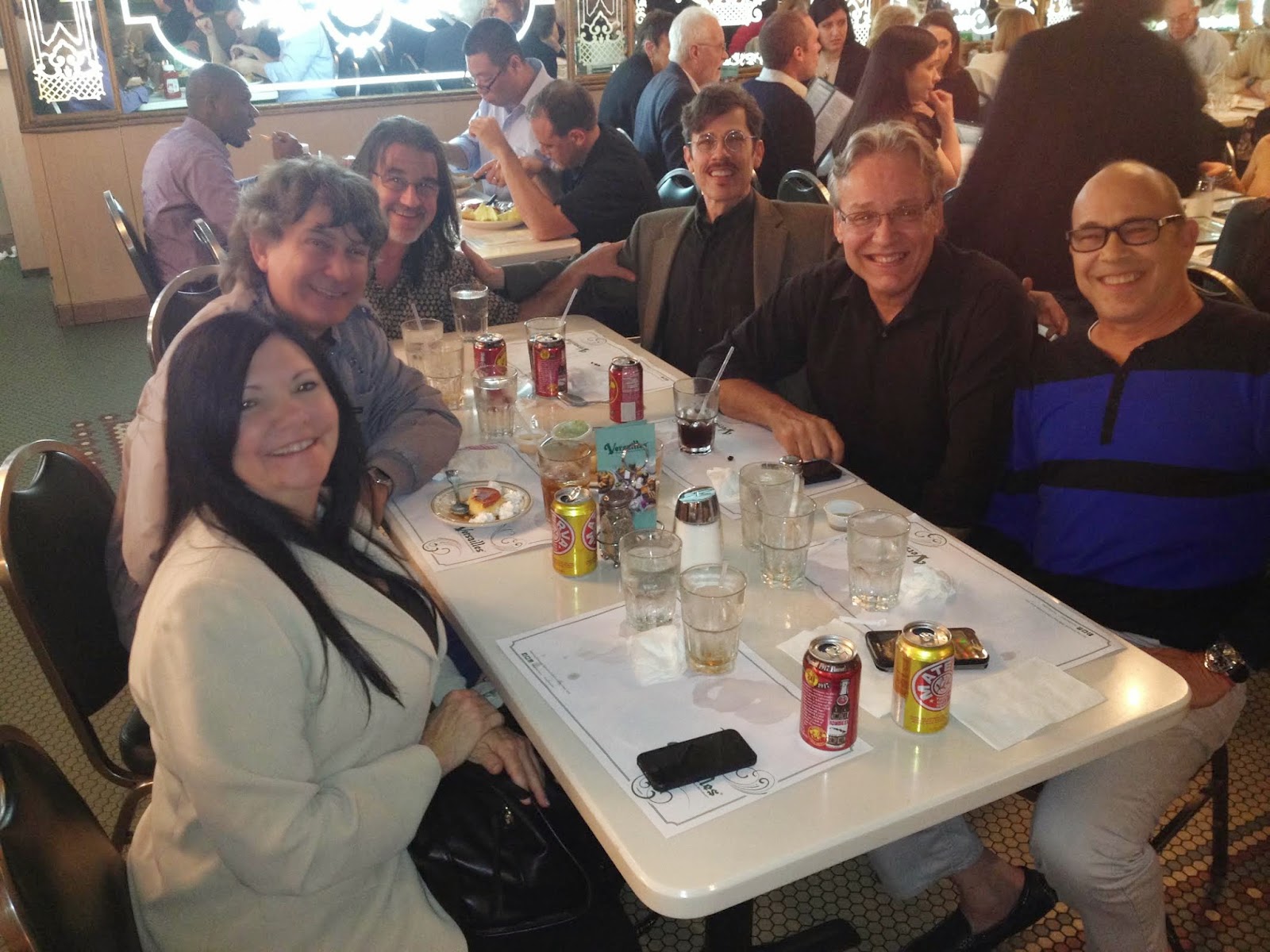 Allan, Nathan and David with friends in Miami 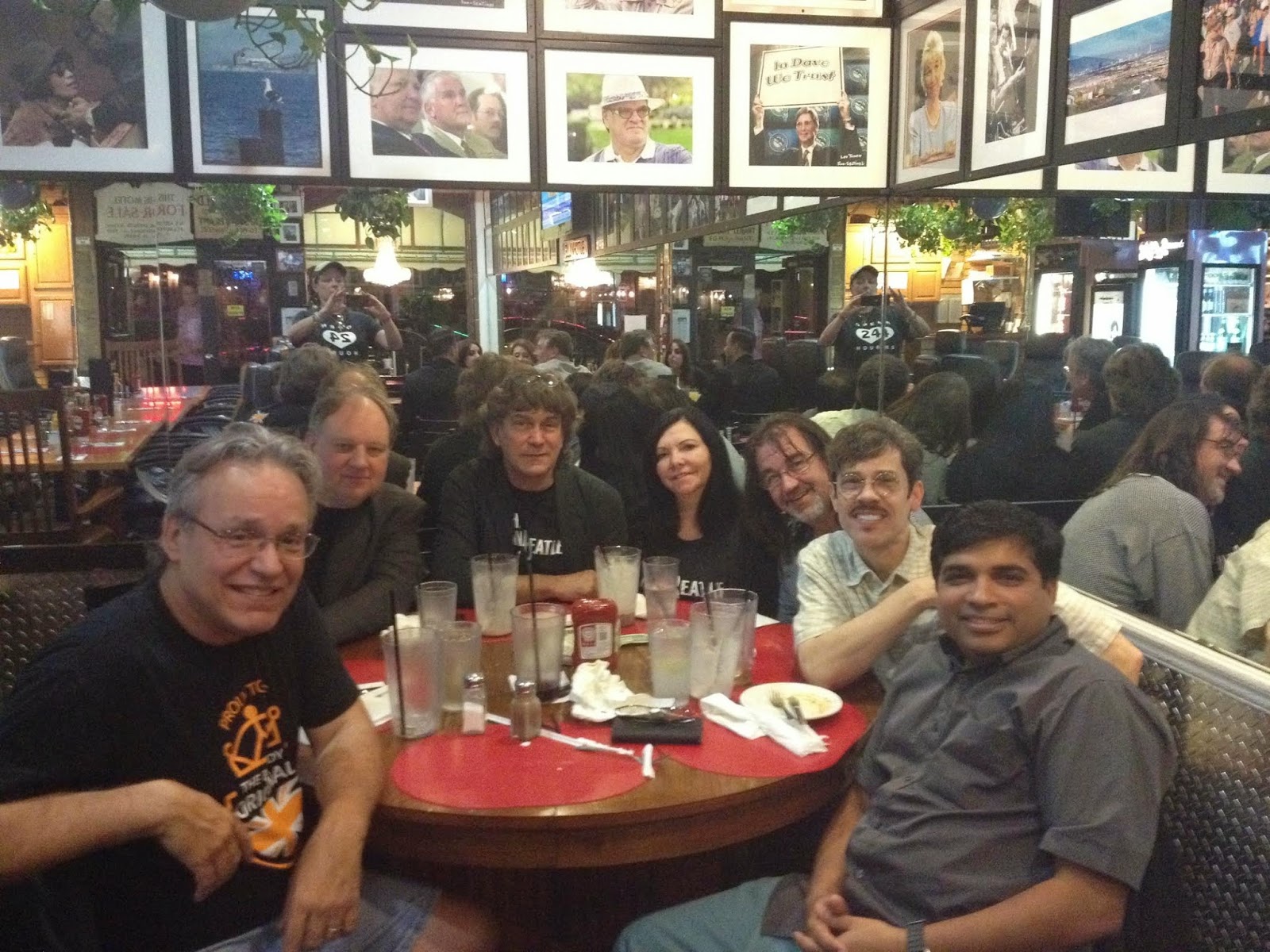 That night in Miami included a visit to the famous Deauville Hotel, where The Beatles played for their second appearance on Ed Sullivan in February 1964. 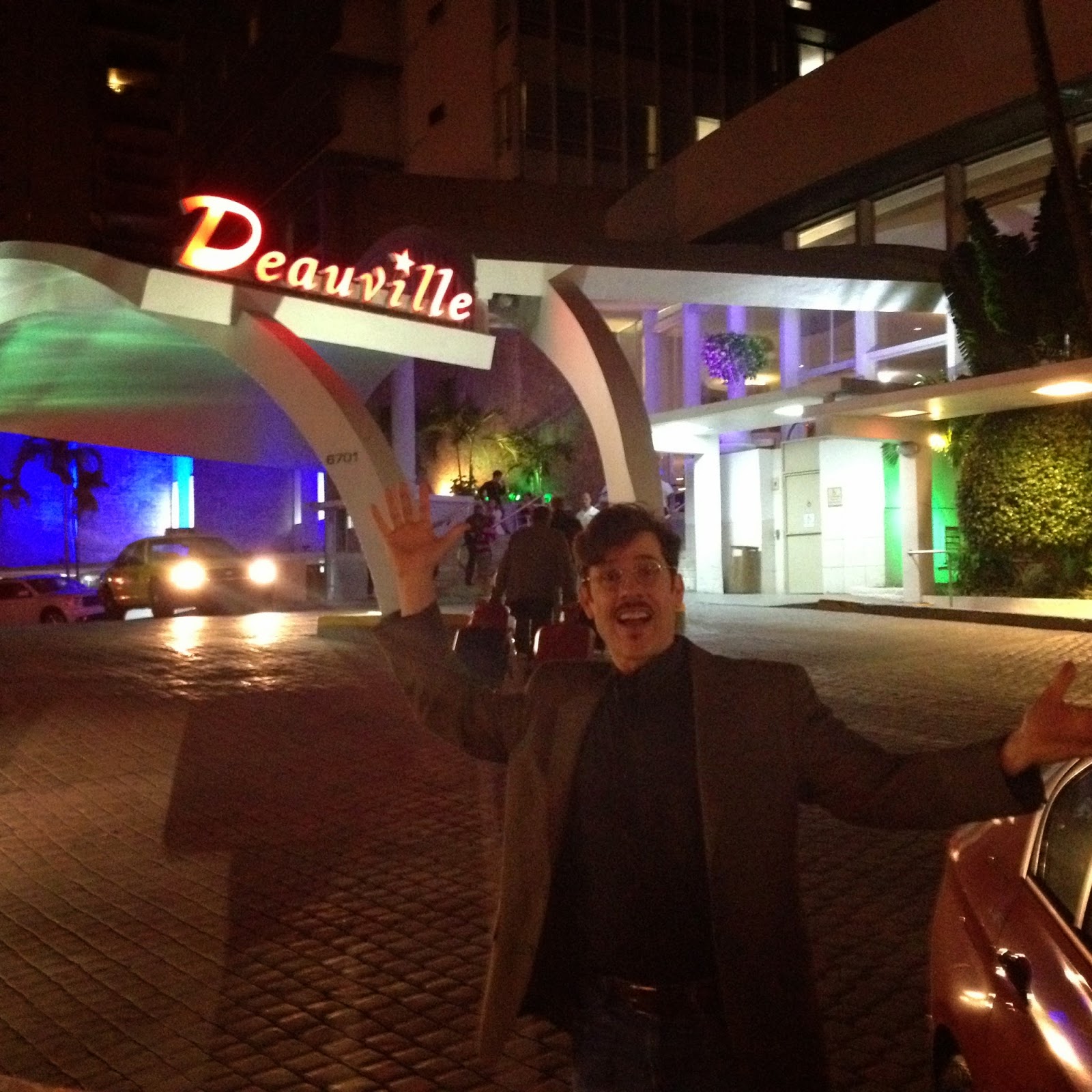 The next day was our first concert, at Florida Atlantic University in Boca Raton. Dennis met up with his brother, Timmy, and nephew Tyler. 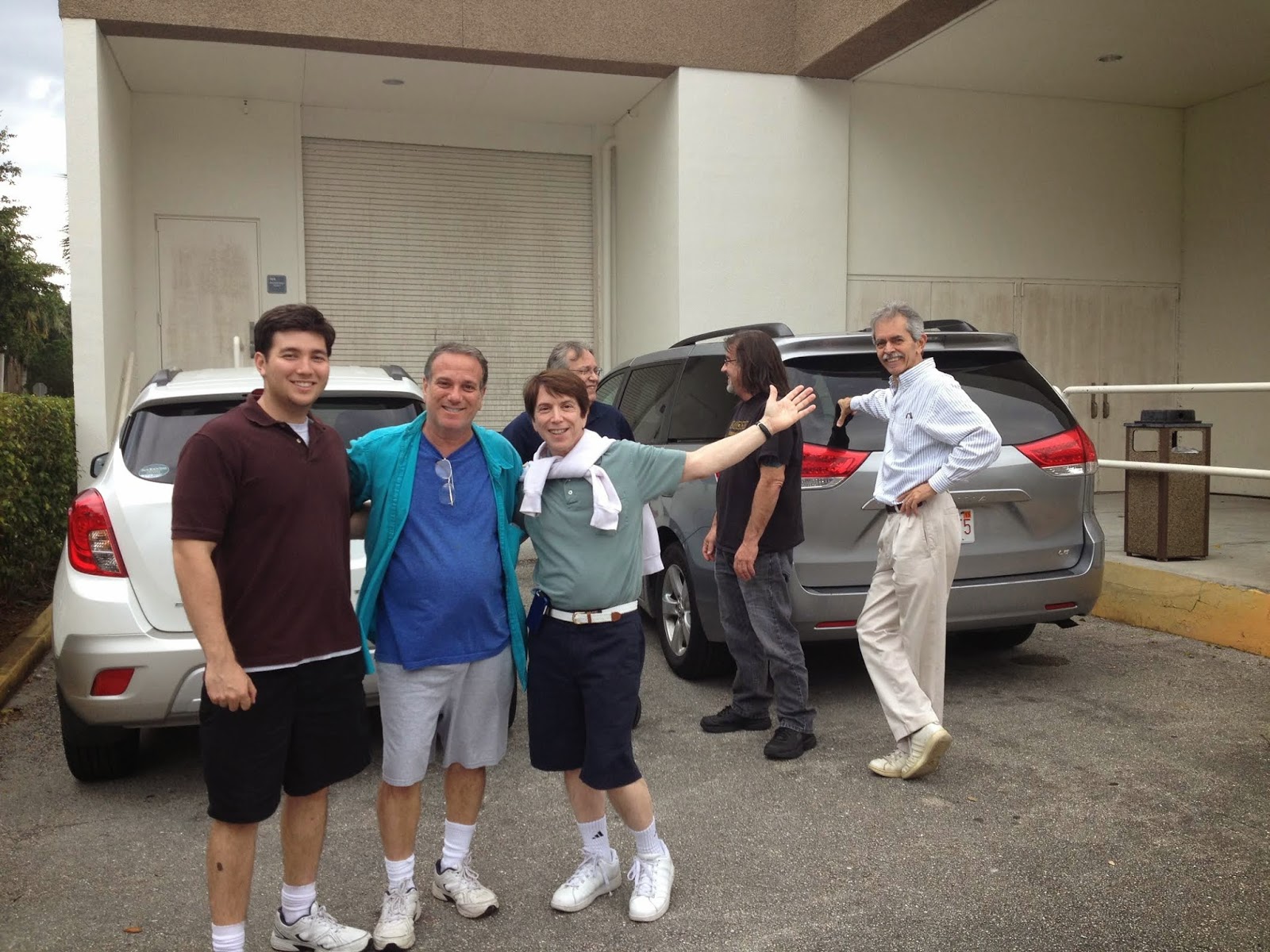 Tyler, Timmy, Dennis with others at the loading dock 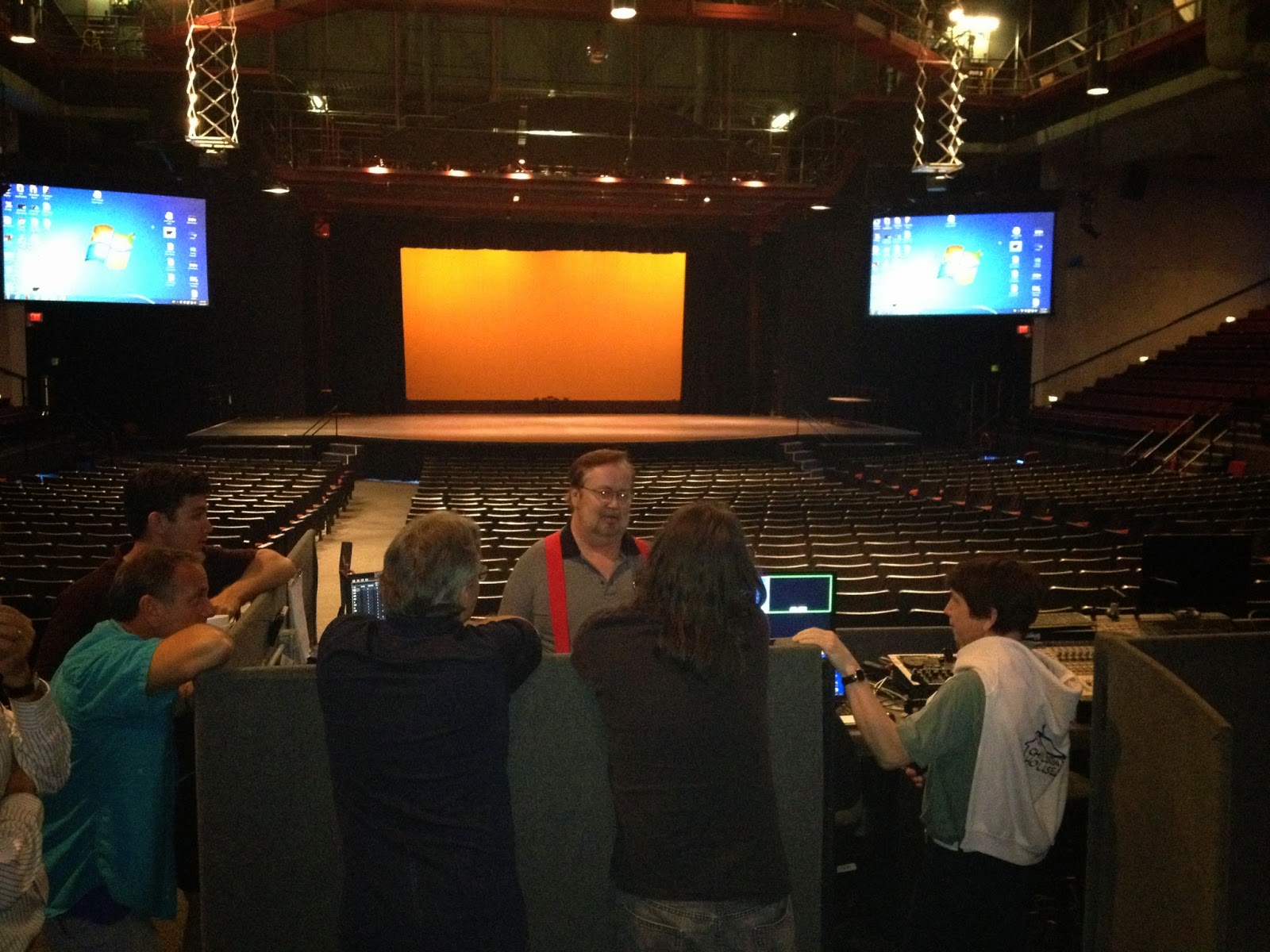 A view of the auditorium from the sound booth,
as we gather to confer with our sound man.

After the show, we gathered with a bunch of friends for a meal. 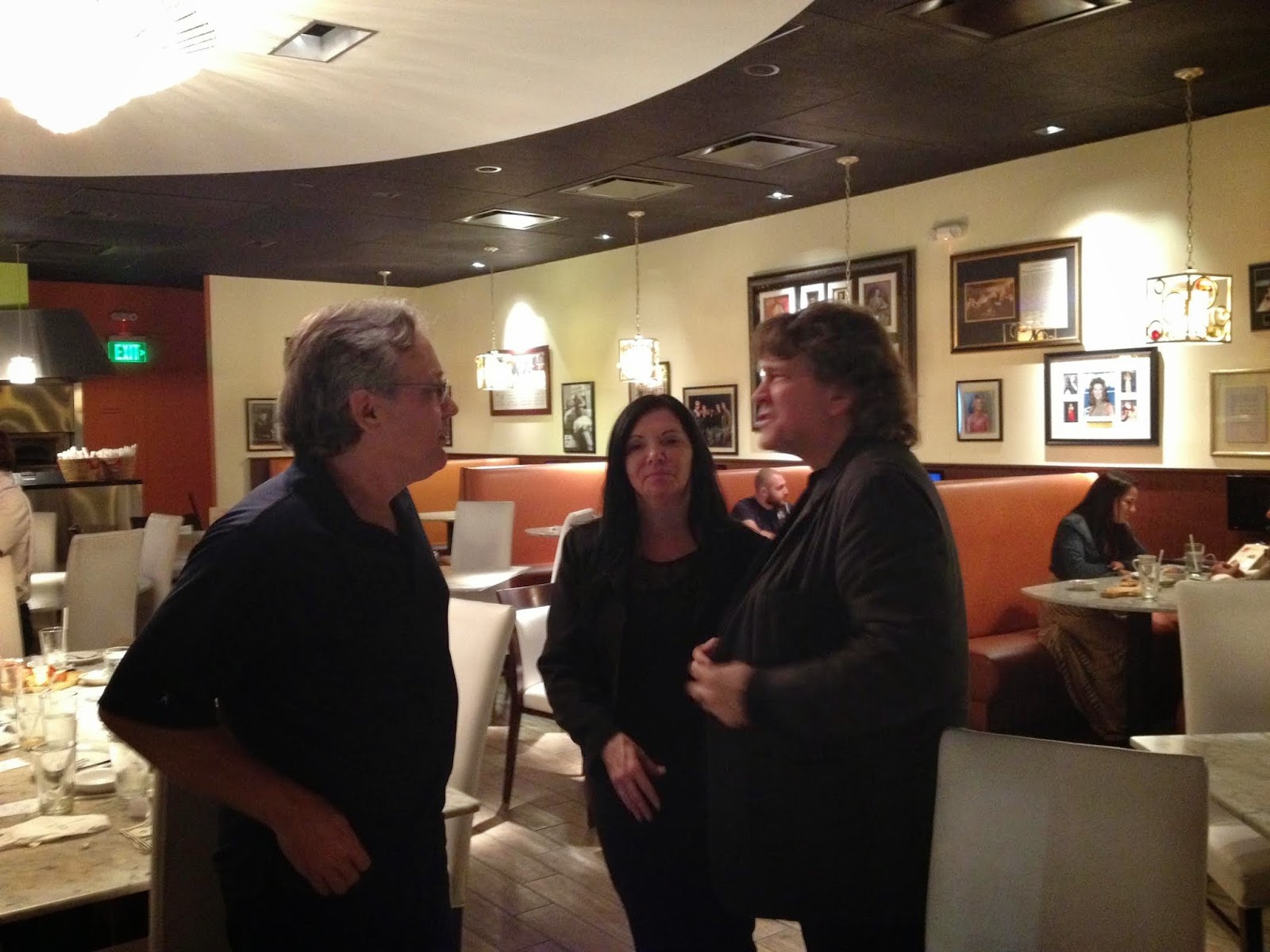 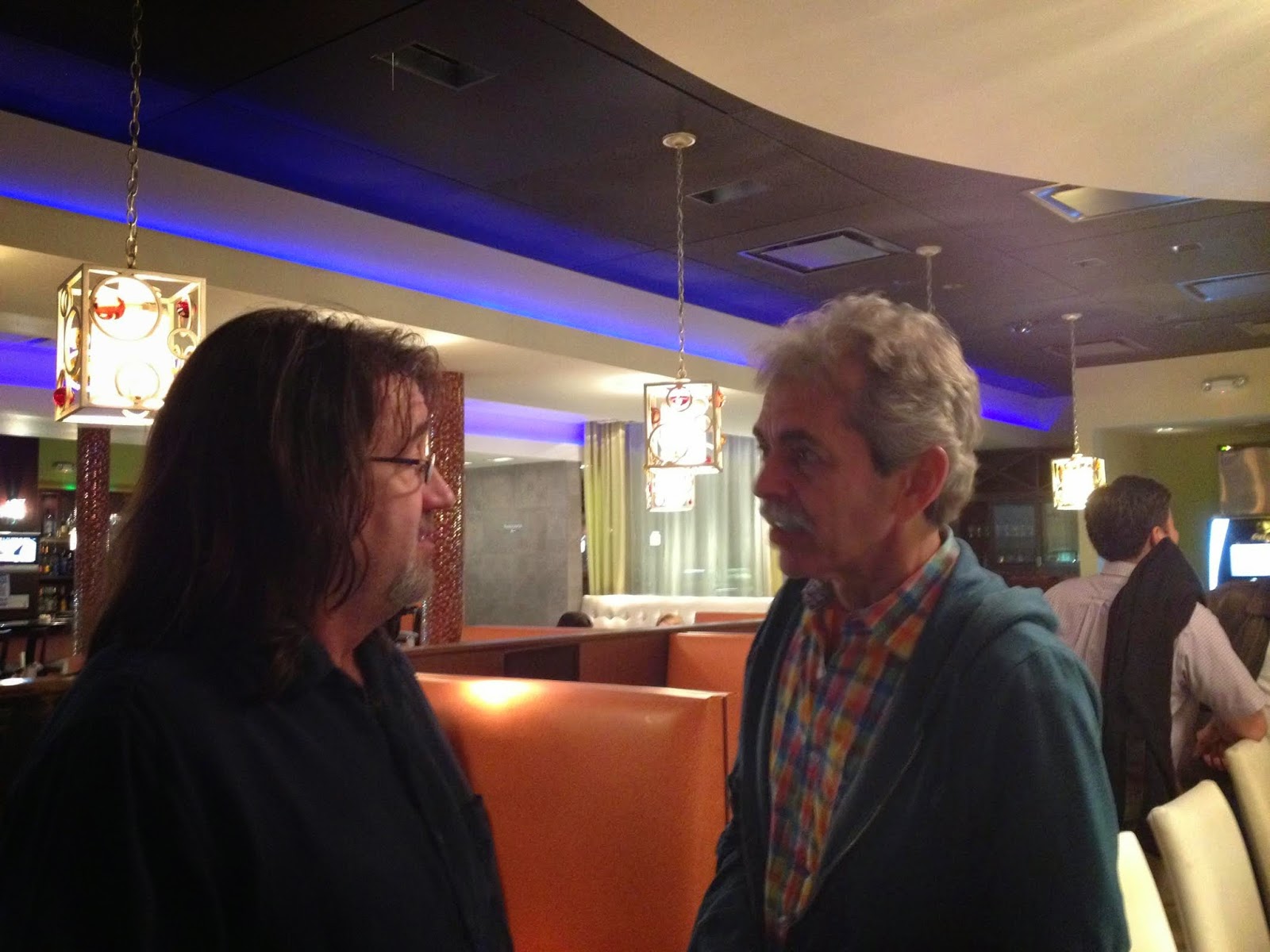 Here's David in front of the church where his father was pastor; the sign says "Iglesia Metodista Unica," which is United Methodist Church. 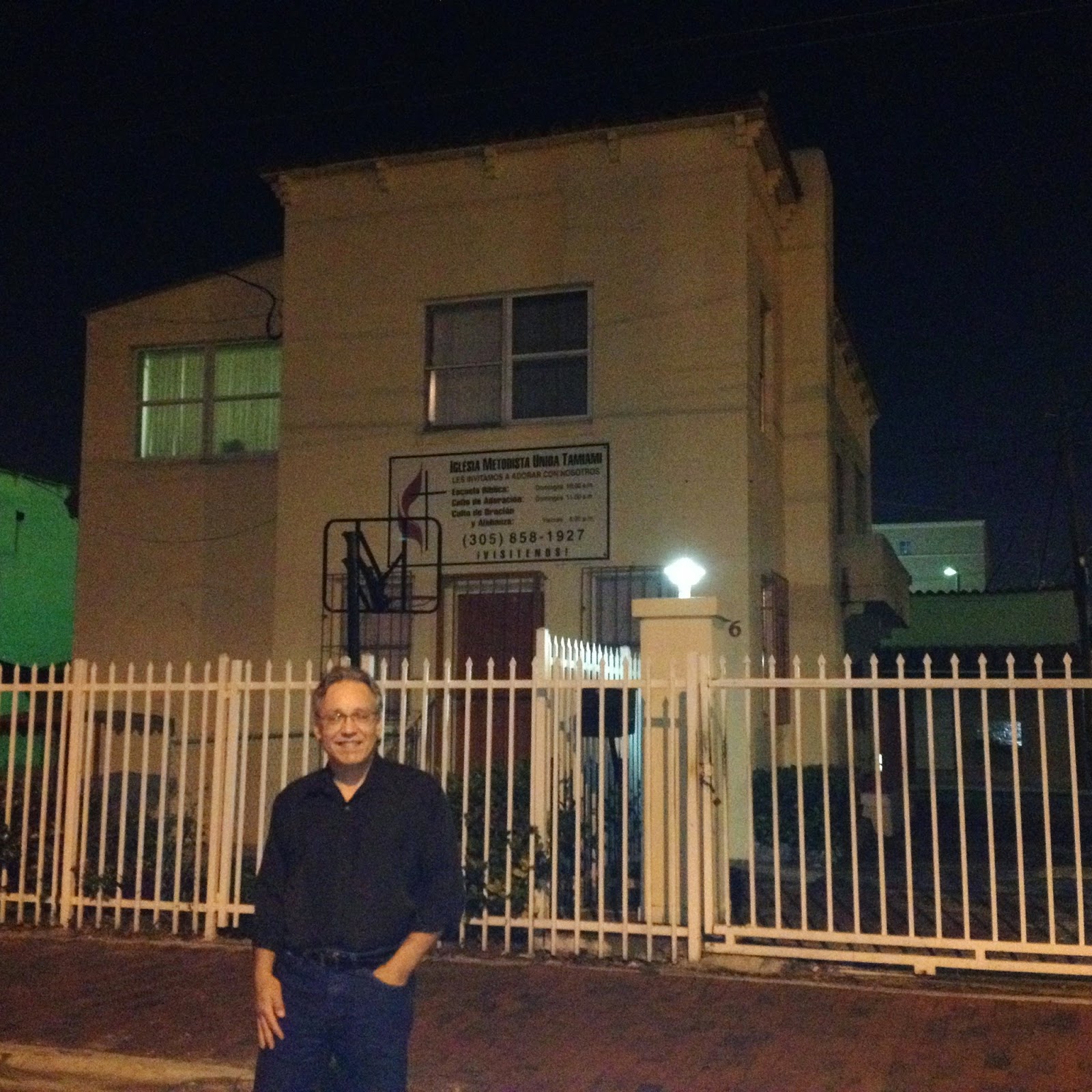 The most recent photo in this collection is from the "meet'n'greet" we did in Key West, where we joined Sebrina in a gathering of the most loyal supporters of the South Florida Symphony Orchestra. 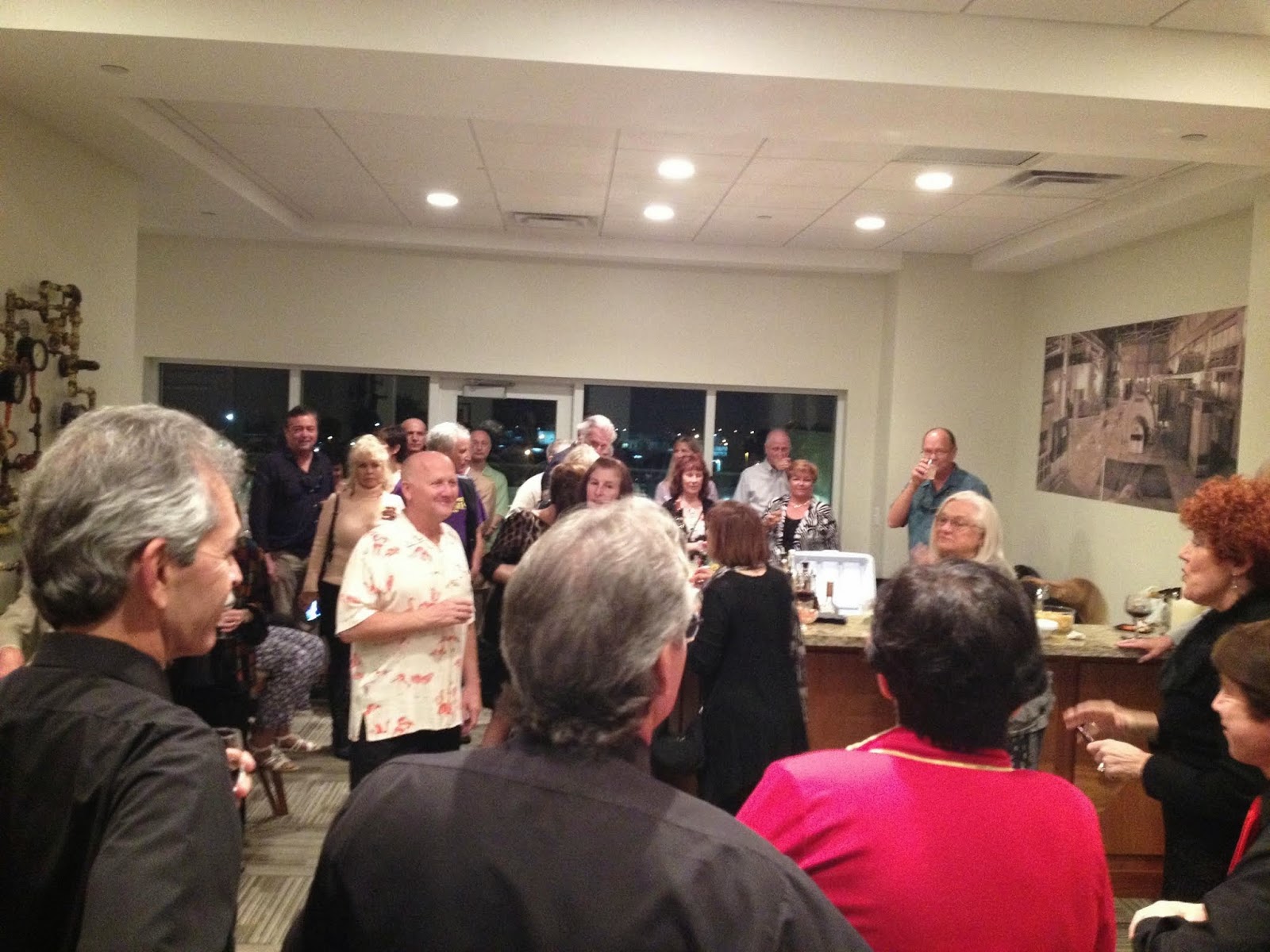 For a more complete account of our trip to Florida, feel free to browse the earlier blog.

For a musical dose of south Florida sunshine, check out "Come To Key West," our youtube channel.

That's the song that David was inspired to write, sing, arrange and produce, looking forward to our trip to Florida. He also created the video, with the help of some of his old friends. We performed the song onstage with the South Florida Symphony Orchestra. It was a great moment for The WannaBeatles.

Thanks to Nathan for the extra photos, and thanks to David for having so many friends in such a wonderful place.

Bloggin' Bryan  8April2015
Posted by The Wannabeatles at 8:48 PM No comments: