The Nashville Airport has an active concert schedule, with a variety of local groups providing live sounds for incoming passengers. It's a win-win situation, with many musicians getting fun gigs in the middle of the day and Music City getting a great reputation as a place where melodies and rhythms fill the air.

WannaBeatles Dennis, David and Bryan have played a BNA numerous times in different configurations, but rarely do we get to play there as The WannaBeatles. Back in December, a week before Christmas, we played the "Starbucks" stage.

As we rolled our gear across the ticket lobby, we could hear the sounds of a live trombone and jazz piano coming from the stage area where we were heading.

That was the group before us, which we discovered was a relatively exotic Latin/jazz ensemble, with a woman playing a full set of vibes in front. The name on the screen said "Rose on Vibes." 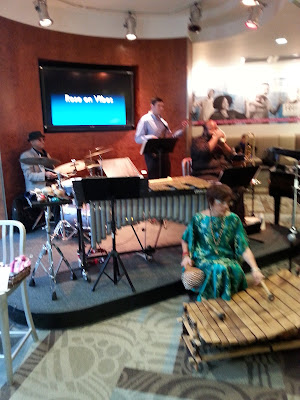 Rose on Vibes, with Smitty on drums, Roland on conch shell

We were setting up our gear as they played, so I had my saxophone out. Noticing it, Rose generously offered me a spot on her stage, so I joined them on their final number, "White Christmas," in C. It was a treat to play with such a cool band, and to demonstrate the spontaneous camaraderie that exists among musicians. 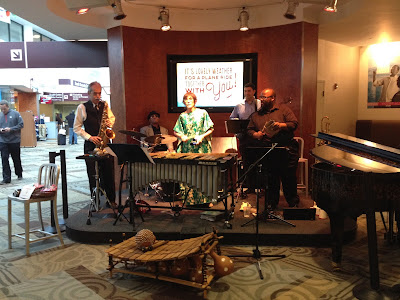 BC on sax with Rose on Vibes

For those who've seen Roland Barber play before, it's not a surprise when he pulls out a sea shell and plays it as if it's just another wind instrument. I had a chance to talk to Roland after his set, and to learn that he had been inspired by Steve Turre, a Julliard faculty member who, in addition to playing in the Saturday Night Live band for over three decades, has pioneered the musical use of the sea shell. Roland had learned about it from Steve Turre during his time in New York.

We had a gig to play, so there was no time to follow up that conversation, interesting as it was. 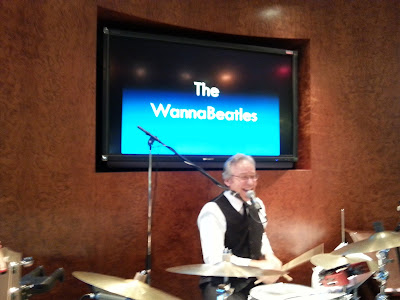 We got onstage and did our show for the incoming passengers.

You never know who might be coming through that gate. One big surprise for us was encountering a young lady with a violin case who recognized us from having played onstage with us at a concert in Knoxville several years ago. Her name is Alicia Keener. She was a UT student at the time; she lives in Colorado now.

She had a WannaBeatles bumper sticker on her case. Thanks for the recognition Alicia! 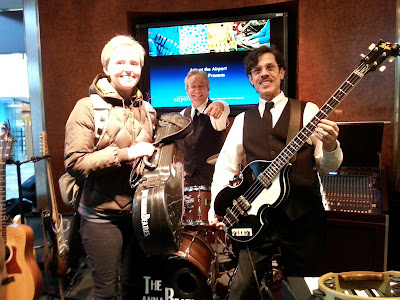 There's nothing like playing the airport - it's hundreds of people, but never more than a few at a time, and they're constantly moving. It's great to see them smile, as they encounter the music on their way in. 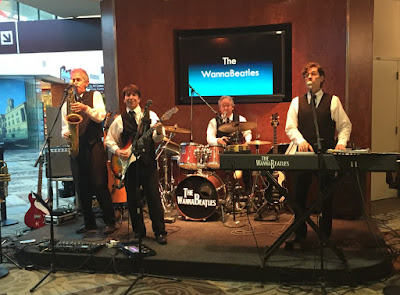 Thanks to Rose on Vibes for inviting me to play, Roland for the conch shell sounds and stories, Alicia for the reunion and bumper sticker, Nathan for the photos, and all the WannaBeatles for being such a fun group.

WannaBeatle Nathan got serious about his sound and invested in a new amplifier.

The brand is TC Electronic. The speaker cabinet is an impressive black rectangle with a sturdy wire mesh grill. The amp is a small sleek unit with a few knobs and lights, carefully designed to create the impression that whoever owns it is cool.

The speaker has its own cover, and the amp has a nifty carrying case to protect it during travel.

Nathan's main goal was to reproduce his keyboards and bass with plenty of clarity and volume.

That doesn't mean The WannaBeatles play loud. It just means Nathan wants to be heard clearly, and we appreciate that. 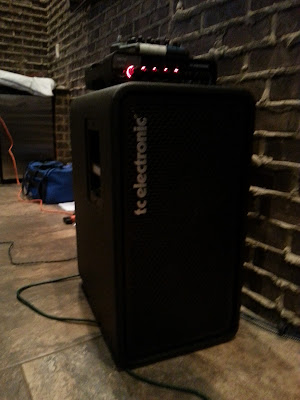 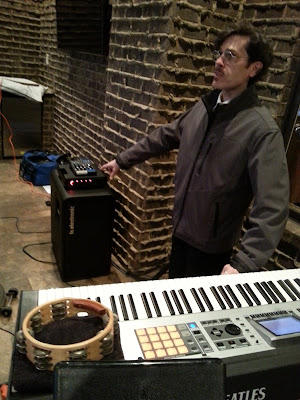 Nathan pointing at his new amp,
which is not so large after all

We got to hear it when we played a private party at a beautiful home in Hendersonville on Thursday December 17.

Our host was Sue Nokes, who is a huge Beatles fan. She has an impressive collection of Beatles memorabilia on display around her house. 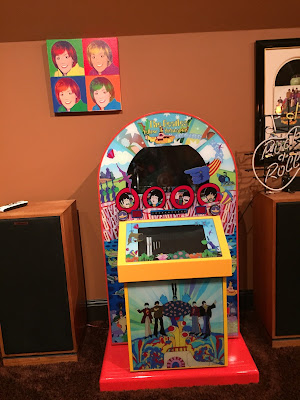 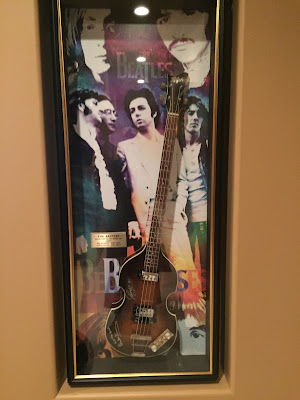 And here's a Hofner bass in a display case,
with authentic Beatles autographs on it

December 17 was a cold night, and we were set up on an outdoor patio. Fortunately, there were several large heaters around us during the night, or we would have suffered frozen fingers. 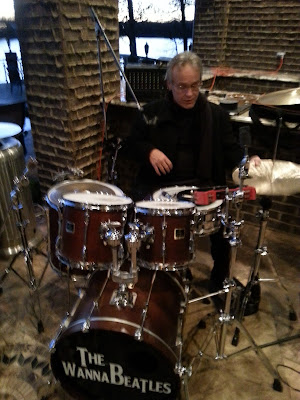 WannaBeatle David in his winter wear 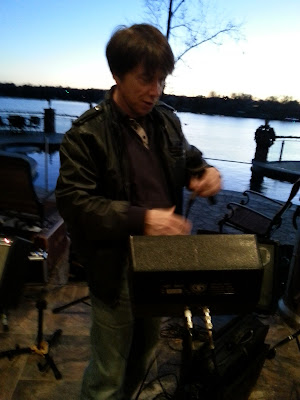 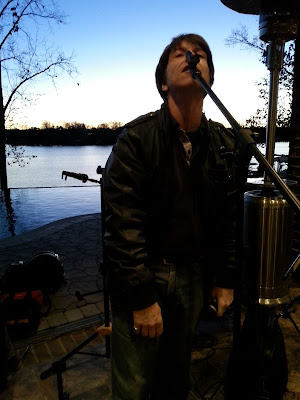 Dennis being silly,
pretending his nose is caught in the mic clip

It was a fun party, and people appreciated the music, even though they had to stand outside on a winter night to enjoy it.
Our hosts also served delicious holiday food, and we were grateful for the hospitality, and the chance to be inside.

Congratulations, Nathan, on the upgrade!

Blogging Bryan 9March2016
Posted by The Wannabeatles at 8:45 PM No comments: