It's the end of December, and a good time to look back on the highlights of our most recent, and our most exciting WannaBeatle year.

For one thing, this blog got started at the beginning of 2013, and that allows us to see almost a year's worth of WannaBeatle-related events, from Ryan's Bar Mitzvah to the new transmission in Nathan's van.

Out of many memorable experiences, the biggest deal for us was writing, recording  and releasing our first fully original CD.

Here it is. Isn't it lovely? 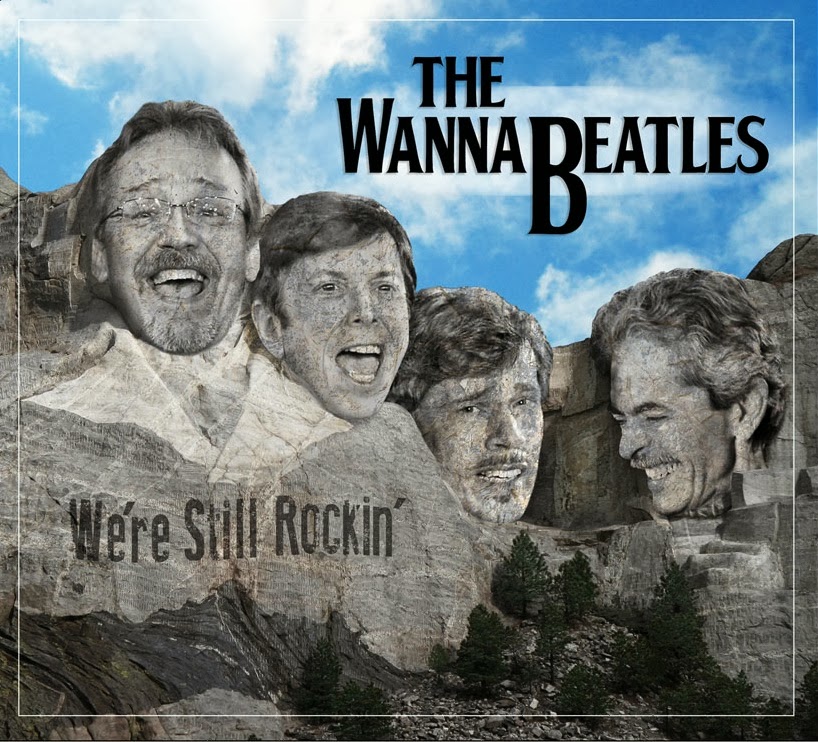 Much of the first half of the year was devoted to working on songs for the album, and facing deadlines. (Check out "Still Rockin' in Dennis's Basement" among the blogs from April and May documenting our diligence.) Then the album came out in June.

Soon after that, we partnered with Big Brothers Big Sisters of Middle Tennessee, who took our song "If We Simply Love" and made it their theme song. Our new friend Todd Wilson at BBBSMT helped us by presenting the song to the agency and making a video of our new version.

We also played at their annual fund-raiser, the Franklin Wine Festival in October, where the video was projected on a screen behind us while we played the special version of the song.

For those who haven't seen the video, it can be viewed at http://youtu.be/WgK3D7nY-iI.

WannaBeatle David was the driving force behind "If We Simply Love." It was his idea. He wrote most of it, sang it, and played drums, piano and bass on the recorded version. Thanks to David, and his parents, we also came up with a Spanish version, called "Si Puedes Amar," which was covered in another blog or two.

Our summer was busy with lots of shows out of town. We visited some states for the first time (Virginia, Ohio, Indiana) and shared stages with symphony orchestras. Those trips are commemorated in various blogs.

Our biggest symphony gig was in Virginia Beach, where we performed with Symphonicity, a full orchestra including harp (for "She's Leaving Home") and piccolo trumpet (for "Penny Lane.") That gig coincided with the 50th birthday of Virginia Beach, for which we wrote and recorded a special song, "In '63." Dennis was the creative force behind that song, and captured evocative details in the lyrics.

Here's the video for that song, with 60's images combined with scenes of Virginia Beach: http://youtu.be/YOddvao_AOc

What made it not only possible but enjoyable for us to play with symphony orchestras was Nathan's skill and diligence as an orchestrator. He wrote the charts we played (with some help from WannaBeatle David) and kept in communication with the conductor of the orchestra for months before we arrived.

Another highlight of the year was participating in the Beatles Global Relay, joining with bands around the world to create a unique version of "From Me To You," to celebrate the 50th anniversary of the release of that Beatles song. The WannaBeatles were among groups from Brazil, Japan, Slovakia, Australia, and Liverpool adding our own playing and singing to the global collaboration.

That video can be viewed at this link: http://youtu.be/PowillF6CGA

We made many new friends during the year, like Richard Courtney, the local real estate columnist and Beatles fan, author of "Come Together: The Business Wisdom of The Beatles." Richard became a sponsor, and now we're selling his book at our shows, and donating some of the profits to Habitat for Humanity.

We also made friends with Hippie Radio, playing at their Christmas party, and discussing plans to partner with them for some exciting shows next year. (Stay tuned - to this blog, and Hippie Radio 94.5 FM in Nashville.)

As December quietly closes, the holidays pass by with the WannaBeatles in four different states with their families. But we have one little Christmas surprise, from an unexpected source.

It's the Nashville Scene. For the six years we've existed here, they've never given The WannaBeatles a mention - good or bad. But they couldn't help but notice the fine music that was written and played for the Studio Tenn production of "A Christmas Carol."

This is one more chance for us to brag about WannaBeatle Nathan. Here's what  Scene writer Martin Brady wrote, in the December 19-25 issue:

"The music by Nathan Burbank is sublime, a mix of traditional Christmas songs and his own original, classically arranged underscoring that embraces all the action with appropriate warmth, whimsicality and inspiration. Burbank and four other musicians deliver it all with high style, live from the orchestra pit."

As we find ourselves saying, it's good to be a WannaBeatle. God bless us every one.

Posted by The Wannabeatles at 6:03 PM