It was the 50th anniversary of the Beatles on Ed Sullivan, "The Night That Changed America."

And it was a great party at the Omni Hotel for us and over 200 fans who were there, and hundreds more who streamed it online.

As previous blogs have covered, we teamed up with Hippie Radio, who secured the Omni as the location. We also had help from our friend Richard Courtney, for whom we wrote and performed a new jingle, "Real Estate Man."

There were technical details to deal with, from the video that goes along with our show to the five camera coverage that Hippie Radio arranged through Music City Roots, which gave online viewers a chance to see what was going on.

So we arrived early at the Omni, to get everything set up. Kellie, the vivacious publicity director who had worked with us on the photo session two weeks earlier, was very hospitable. She gave us complimentary valet parking and a hotel room, then took our orders for a complementary meal from their hotel menu.

We worked with the Barlines soundmen Kyle and Max, in addition to our usual sound man Allan Waugh. Barlines is an usual room, being shaped like a large "L." It has artwork and decorated mirrors commemorating many concerts and major artists who've played Nashville in the past.

Another feature of the room is a huge screen behind the stage, usually devoted to sports games, but tonight showing videos stored in Dennis's laptop. Those include footage from the Ed Sullivan show, along with different videos for all the songs in the show.

To keep us in sync, the video output is connected to a set of earbuds worn by WannaBeatle David during that Ed Sullivan footage.

Hippie Radio had been advertising the show for two weeks, so there was a good turnout. The doors were supposed to open at 5 pm, and by that time over fifty people were lined up in the hall outside the door. We decided to serenade them, playing an impromptu strolling version of "Nowhere Man" as we walked by them on the way to the elevator to get to our dressing room. 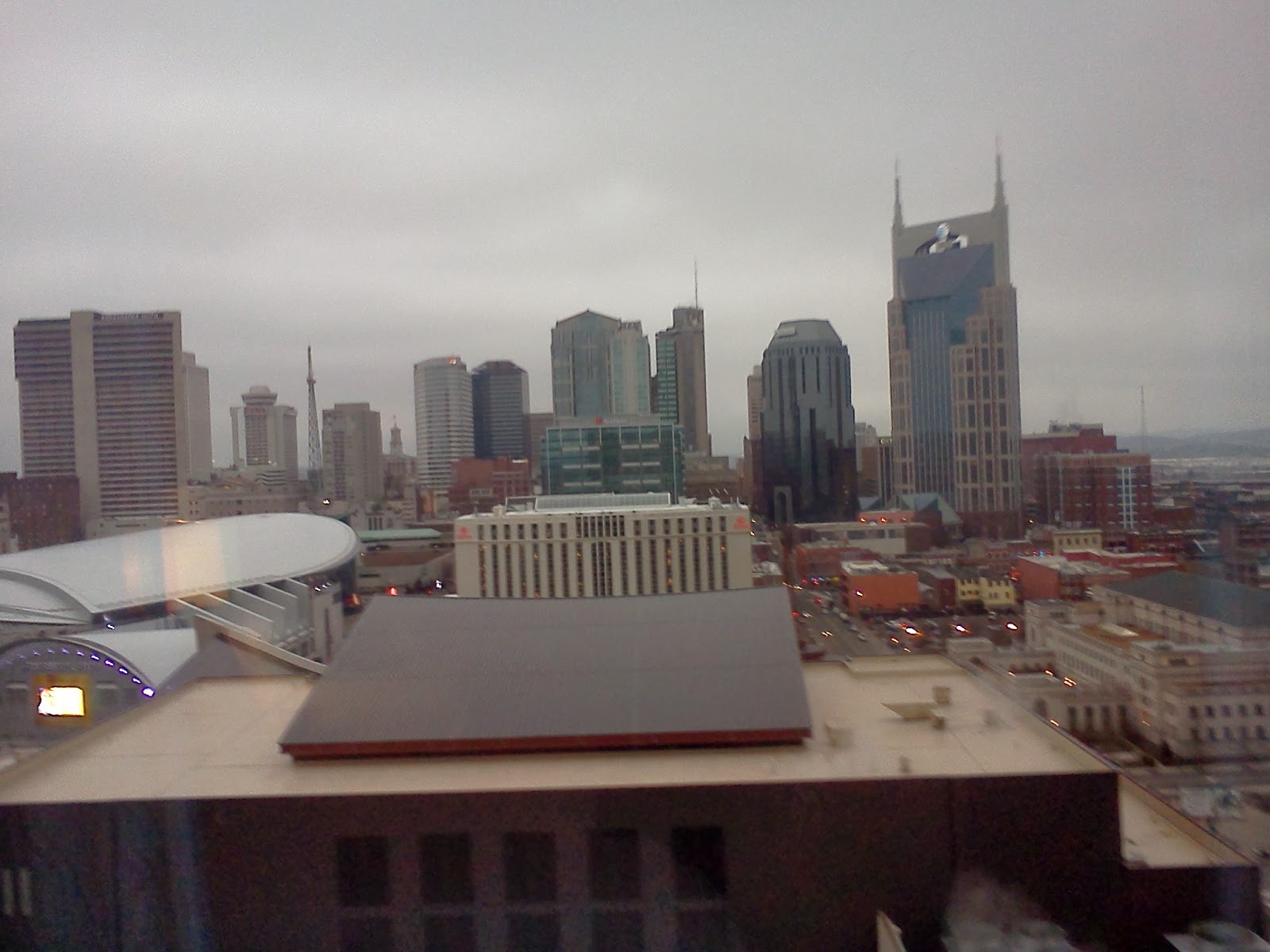 Here's the view from room 1349, where we ate our chicken club sandwiches.

Our friend John Foster went onstage at 6 pm, playing a wide variety of pop tunes, including a bit of Beatles. The crowd that had overflowed Barlines was directed to the nearby Bongo Java, where they could view a large screen TV streaming the show directly from Barlines.

The streaming was the high-tech feature that distinguished this particular gig. Thanks to Hippie Radio providing the camera crew that works for Music City Roots, we had five cameras and professional video editing for the entire evening, and could invite our friends and family all over the world to watch the show on their computer. 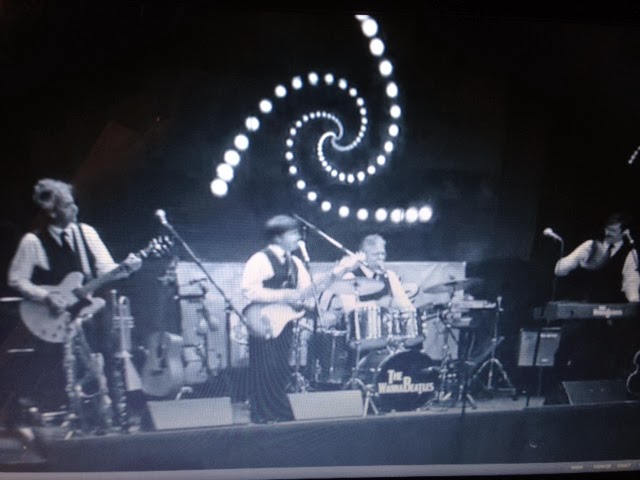 The other thing that was exciting was just the energy of so many people enjoying Beatles songs. At one point, a group of enthusiastic listeners rushed the stage, screaming, probably doing just what they did 50 years ago when they were a lot younger. 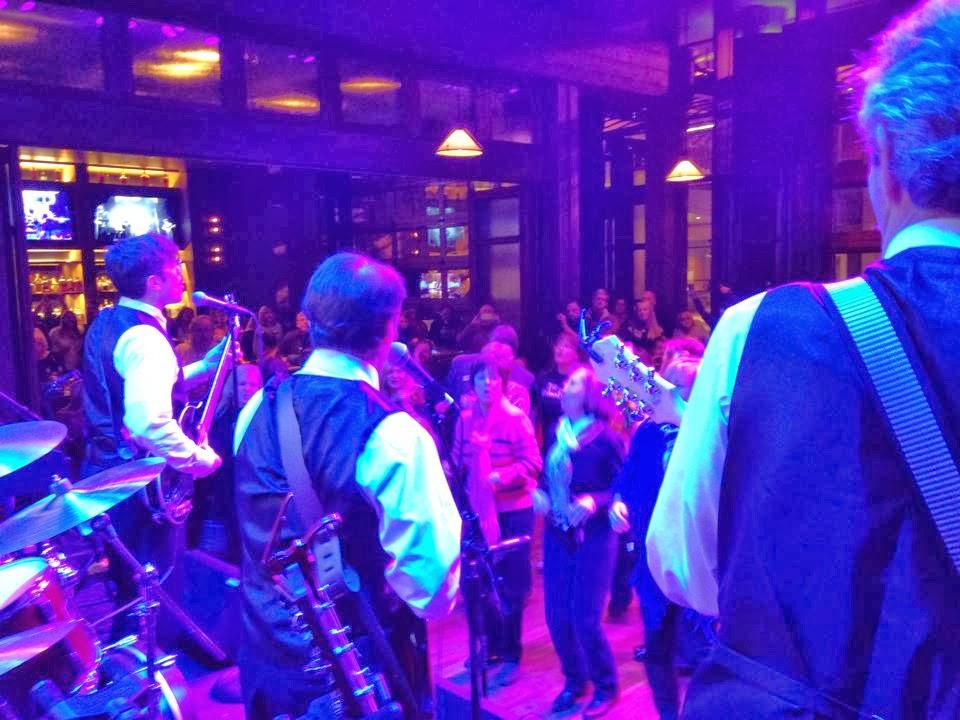 We opened our set with "Because They Were Fab," our special tribute to the emergence of Beatlemania in America. After the Ed Sullivan segment, we played a wide selection of Beatles songs, from the early to the late, from "Hold Your Hand" to "I Am The Walrus."

But we departed from the Beatles song list in our own special way, which included Dennis's parody of "Yesterday," "Creme Brulee."

We played "Daydream Believer" in honor of Davy Jones and The Monkees. We played our brand new radio jingle for Richard Courtney, "Real Estate Man," while Hippie Radio DJ Chris Luckey recited the text onstage. We also played "In '63," which has been getting airplay on Hippie Radio lately.

One of the great summarizing statements of the night was from Barb Deniston, the general manager of Hippie Radio who has put so much effort into making this celebration a reality. She reported that when we played "In '63," she saw people singing along. That's a thrill of another level, a communal moment sparked by the magic relationship between musicians, their listeners, and the essential catalyst of radio. Barb's collaboration with us has been just as creative and exciting as any songwriting session, and we're grateful for the opportunity.

What happened that night, as we celebrated what happened fifty years ago, is that we saw the emergence of a new community, people who love music and are happy to show it. At one level, it's the boomer demographic, as specifically targeted by Hippie Radio. But it's not limited to any certain age bracket.

Most of them are old enough to remember the thrill of the music in its first appearance, but many are younger, and drawn to the energy of the songs themselves. Music can be analyzed endlessly, but when people enjoy it, no extra explanations are necessary.

We're very happy to be part of it.

Posted by The Wannabeatles at 7:02 PM