Crockett Park looms large in The WannaBeatles legend. Our Crockett summer show is a tradition that goes back six years.

The beautiful Eddie Arnold Amphitheater is the outdoor venue where we broke the attendance record by drawing 5,000 people. A photo of us in front of that crowd is featured on our website.

Crocket Park is  the peak of our summer schedule, the largest and most enthusiastic crowd we play for.

Over the years, Crockett has been where we pull out all the stops, inviting dancers, jugglers, high school choirs, youth orchestras and brass sections to join us onstage. This year, as described in an earlier blog (Satchmo vs. The Fab Four, 8June2015), we invited Freddie Holt, a local trumpet player who does a Louis Armstrong tribute, to sing "Hello Dolly." That was the first song to hit number one after The Beatles occupied that spot on the American charts for fourteen weeks starting in February 1964.

The Crocket Park show is always on a Sunday, and sometimes it rains, or threatens to. This year the sky was beautiful, clear and sunny. 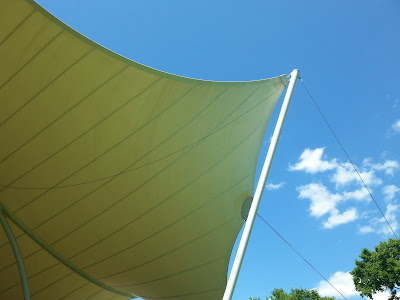 Good Yoko and I arrived early, and set up our picnic at just the right location - center, but back a bit from the front. 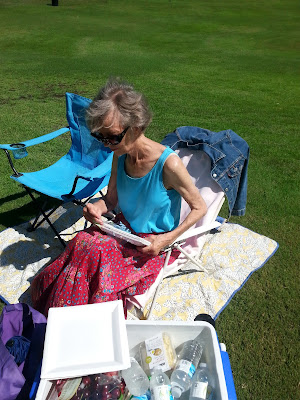 Bloggin' Bryan and Good Yoko, photographed by ourselves

Gradually other WannaBeatles arrived, and got to work. 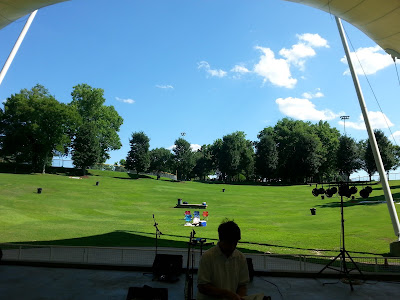 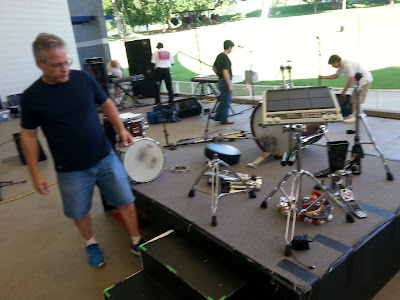 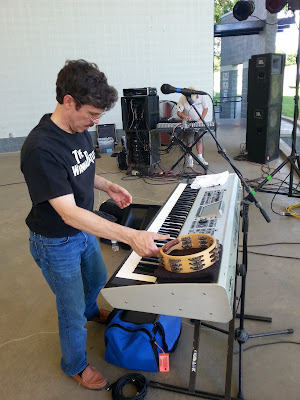 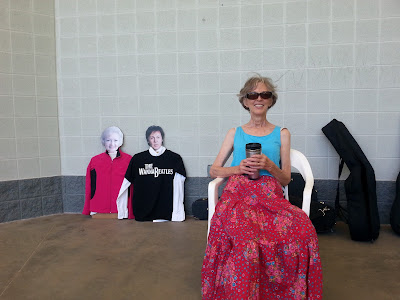 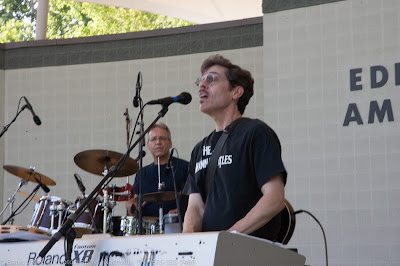 David and Nathan during sound check

In addition to Freddie Holt, we had joining us a couple of dancers from Belmont who had been among the "flash mob" that appeared with us last October for our special "Welcome Paul" show downtown. (described in the blog "Return to Rippy's" 12December2014) The dancers had arrived in a colorfully painted Love Bus, and danced in front of the Arena, while the sound of The WannaBeatles drifted from the Rippy's rooftop, and concertgoers arrived for the McCartney show. 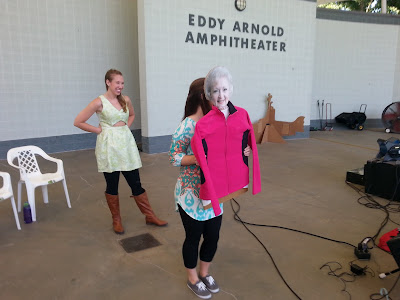 Before the show, we had time to pose for some photos in the wooded area behind the amphitheater. Photographer John Bates took these, and many other great shots of our show which are published below.

Four musical guys in a line 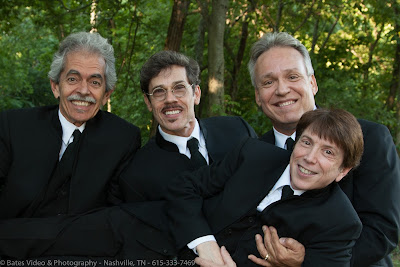 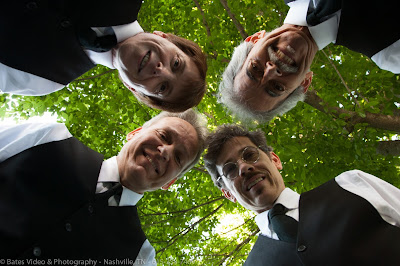 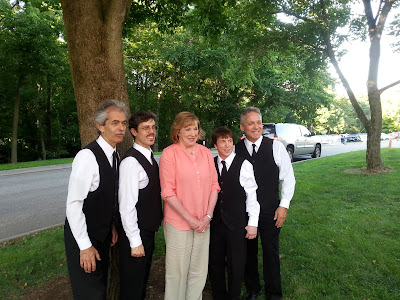 WannaBeatles posing with Her Honor
the Mayor of Brentwood 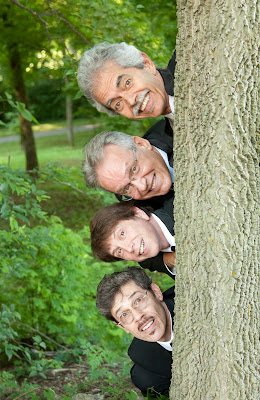 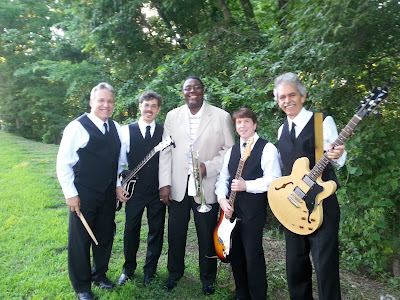 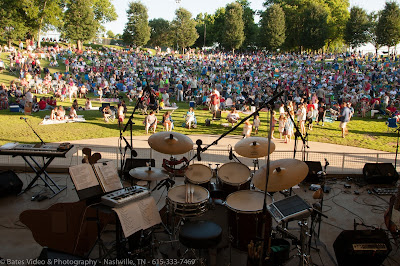 Meanwhile, the crowd was assembling for the big show 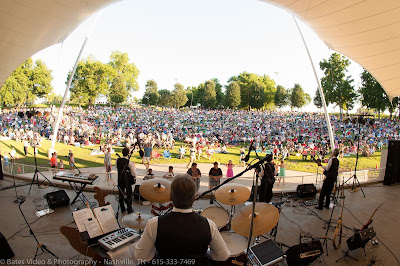 Then, opening the show - panaramic shot 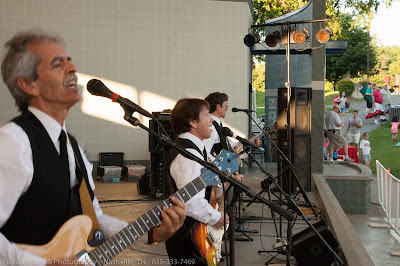 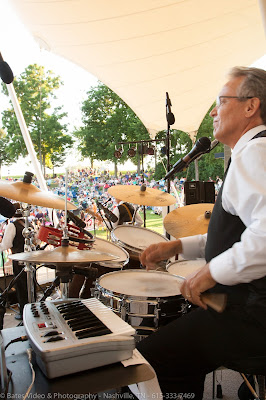 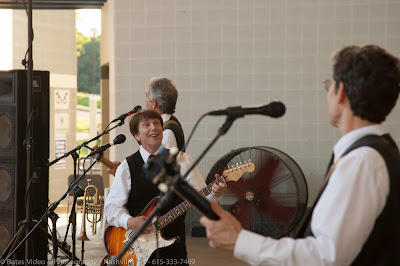 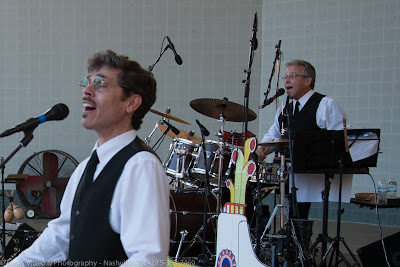 Nathan and David, and a glimpse of our Yellow Sub 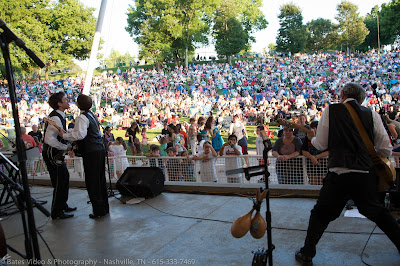 Rockin' out on "You Can't Do That" 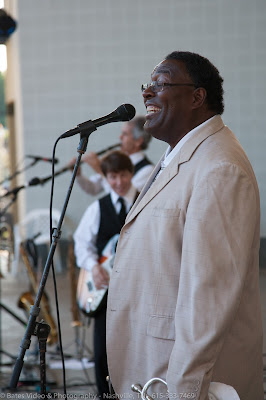 Freddie was great. Not only did he do a fine version of Hello Dolly (with Dennis simulating the banjo on his trusty MIDI equipped guitar), but he also followed up with "Wonderful World," the beautiful song that was Louis Armstrong's other major hit. 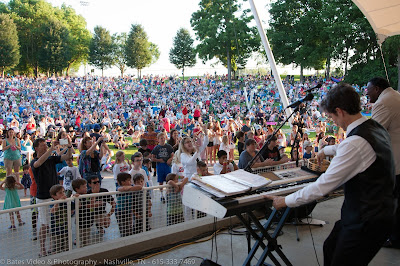 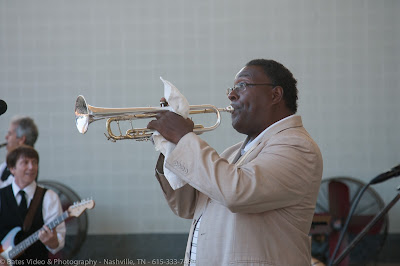 It was a hit that night at Crockett, as audience members gathered in front of the stage, some even crying at the beauty of the lyrics and the moment. I know Freddie enjoyed it. 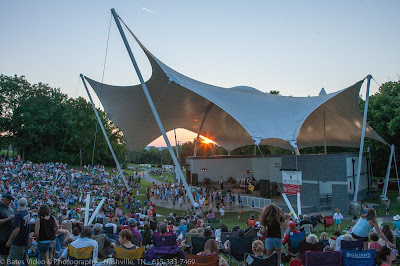 Sunset at the Eddie Arnold Amphitheater

Our friend Rob White took a picture of us while fans were gathered in front of the stage. 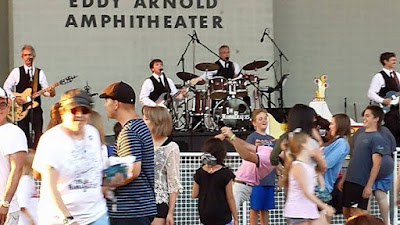 Crowd dancing and having fun 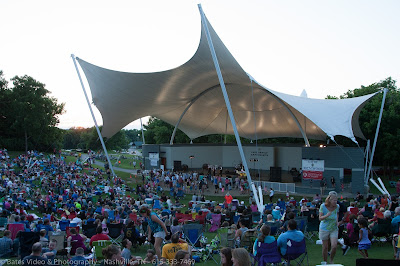 One more view of the huge tent,
with lighting stripes on its inner surface

It was another great time at Crockett. We appreciate the City of Brentwood for making such an enjoyable community event, and we loved having Freddie Holt and the Belmont dancers join us onstage.

Thanks John Bates for his photos, and to everyone who comes to Crockett Park for making it such a wonderful experience.

Posted by The Wannabeatles at 12:33 PM