April has started, and we still haven't finished blogging about last year. So we'll add this one little post before a final blog about New Year's Eve in Cincinnati, then we'll catch up with 2016.

December 17, 18 and 19 were three successive days of WannaBeatles activity. The first two - a private party and an appearance at the airport - were covered in the most recent blogs. The third, at our usual Puckett's Grocery in Columbia, featured a Christmas tree onstage, which had to be moved back to make way for our amps and drums. 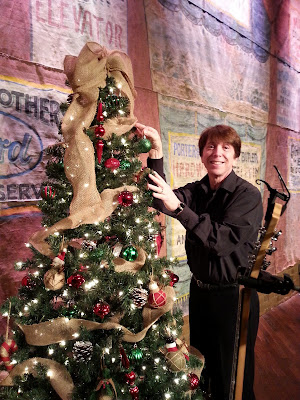 The only other photo from that evening is a shot of the rarely seen Good Yoko (aka Holly, wife of WannaBeatle Bryan.) 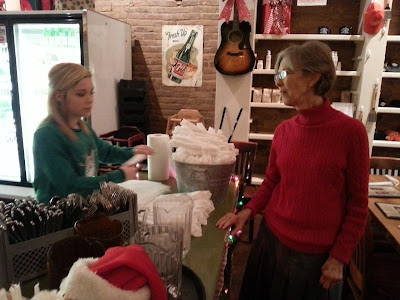 Holly at the counter, wearing her holiday red

Because of a lack of further photos, this report is brief.

And so, The WannaBeatles got onstage and played a bunch of songs that people enjoyed. And then we took a break until New Year's Eve, which will be covered in the next blog.

Thanks for participating in the what may be the shortest blog of the bunch.

-Blogging Bryan 3April2016
Posted by The Wannabeatles at 6:48 AM