WannaBeatle David lives in Nolensville, which has led to some home-town gigs for The WannaBeatles. It started last January, with a show at the Historic Nolensville School building, as documented in the "Nolensville" blog.
(For those interested in the whole story, here's the link: http://thewannabeatles.blogspot.com/2015/02/nolensville.html)

On that first Nolensville gig, after setting up and doing our sound check at the Historic Nolensville School building, we walked across a parking lot to eat supper at what was then a relatively new restaurant called Nolen's Place. We enjoyed the food, and the atmosphere, as the owner, Lou Leiker, came to talk with us at our table.

Nolensville, we discovered, was named for William Nolen, who was traveling through the area in 1797 when his wagon wheel broke. Finding the area rich in natural resources, he decided to settle there with his wife Sarah. It has grown since then, but remains a place where people like to live.

Our connection to the town, and the historic building, has continued into 2016, with another show we did April 23.
Here's an encouraging comparison, indicating that The WannaBeatles have made progress over the last year, at least in terms of ticket prices. 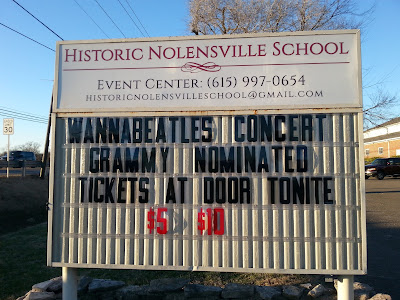 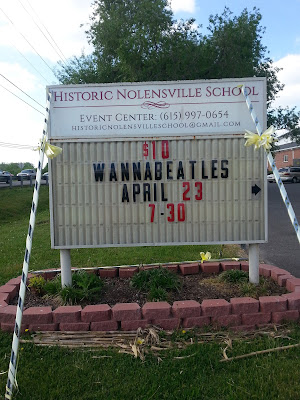 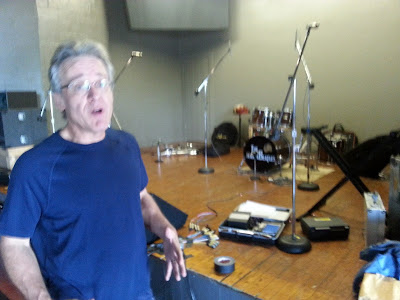 Local legend David showing up for the gig

We had the same sound system, operated by Wayne, who has maintained a classic array of vintage microphones and cables in perfect condition. 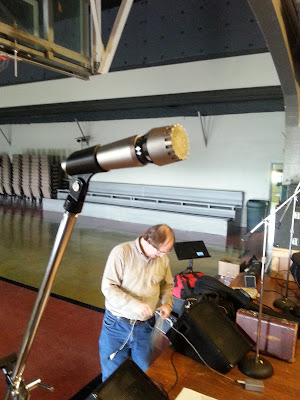 Wayne connecting a cable,
with a vintage AKG mic in the foreground

We received the same hospitality at the same kitchen next the the auditorium, where they served us supper before the show.

Perhaps the most vivid indicator of our rising status in Nolensville was the placement of a yellow poster over the urinal in the men's bathroom. 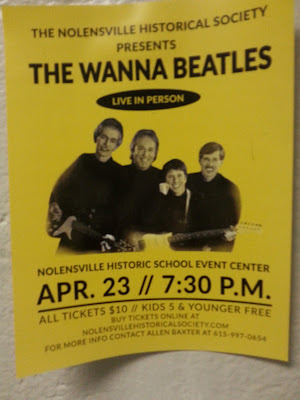 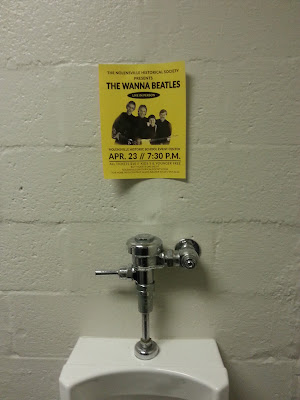 WannaBeatle Dennis was impressed with the level of publicity, and insisted on getting a photo.

This time we had our snappy stand up banner to add to the stage setup. 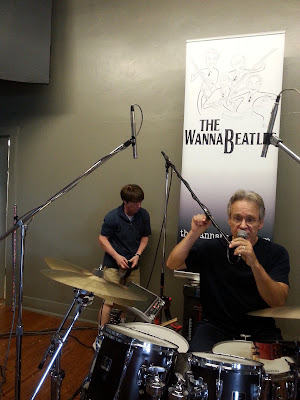 WannaBeatles Dennis and David setting up for the show

And this time, Bloggin' Bryan took a brief walking tour of the rest of the building, which has been converted into a museum of local treasures and memories. 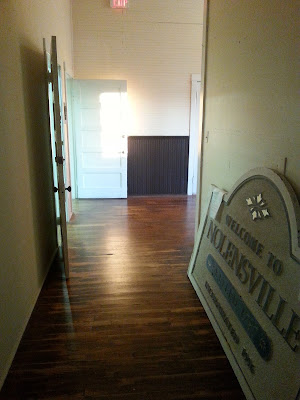 Exploring the rest of the building 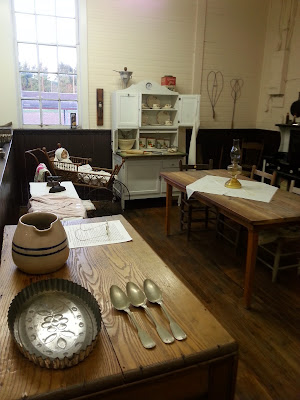 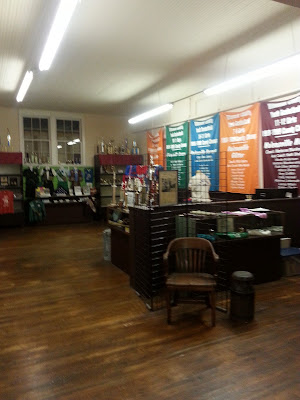 Trophies and banners from past sports victories, etc. 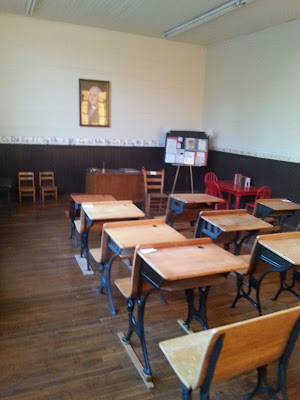 Reproduction of school classroom,
complete with wooden desks and
portrait of George Washington on the wall

As is often the case, the usual disclaimer applies, where the gig we played has no photos of the show, since the photographer was busy onstage attending to his musical duties.

But suffice it to say that we had a good time, and so did the people of Nolensville who came to see us. There were several generations of fans, some wearing WannaBeatles tee shirts, and dancing in front of the stage.

But perhaps the most memorable sign of our making a splash, so to speak, in Nolensville might be that poster over the urinal.

The WannaBeatles have another show in Nolensville coming up this weekend, for their Fourth of July celebration.