On Memorial Day weekend, The WannaBeatles returned to Belterra Park resort near Cincinnati, just across the Ohio River from Kentucky.

The story begins and ends with the U-Haul trailer, although we had no idea when we started what a big role the trailer would play.

But first, some background.

We had played Belterra on New Year’s Eve, as reported in a recent blog.

(Here’s the link: http://thewannabeatles.blogspot.com/2016/04/new-years-eve-in-cincinnati.html)
That gig was memorable because of hundreds of balloons that were released upon the stage at midnight. 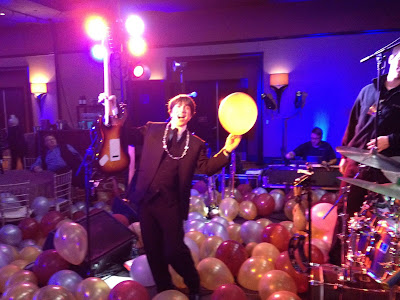 Belterra is a large resort, run like a Las Vegas casino. Along with thousands of slot machines, there are numerous restaurants, including a huge buffet with food offerings as diverse and delicious as any hungry guy could want.

But Belterra is different from a Vegas casino in being attached to a race track.

Thoroughbred racing is a venerable Kentucky tradition, older than Vegas itself, but now run with corporate efficiency by the methods that have made Vegas successful. Horse racing at Belterra is just another “gaming” activity, with bets being placed and collected at a window near the track, so that people can put money on the horses they hope will win, while the “house” keeps tab of this steady income stream.

Our contact there is a guy named Leroy Ellington. Leroy books the bands and plays in a few bands himself, so he understands what it’s like from both sides. This makes him a very sympathetic representative for us, as he explains certain realities to management, like how long it takes to set up. He’s also a fun guy to hang out with.

But let’s get back to Nashville, where our adventure started.

As usual, we met at Nathan’s house. It was Saturday morning, May 28. 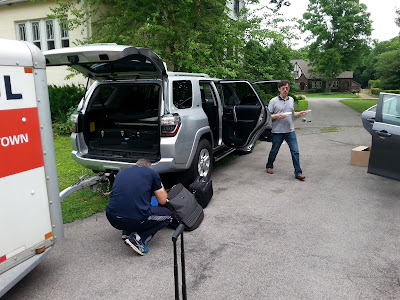 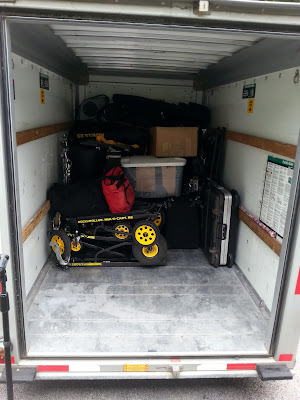 We drove up I-65 into Kentucky, stopping for fuel in Bowling Green, near the Corvette Museum. 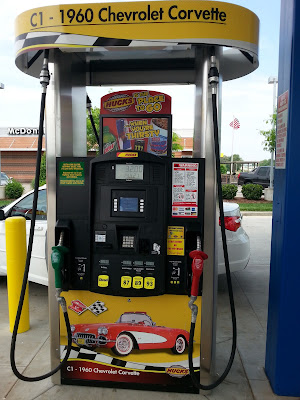 This particular trip had one peculiar variation involving Nathan. His family had just started a vacation in Colorado, so he made plans to join his wife Sally and their son Steven for the rest of the week out in Colorado.

Nathan has demonstrated a great skill at figuring out solutions to puzzles such as how to get to Cincinnati on one day, and to Colorado the next day, without disrupting an existing gig.

Here’s what he figured out: the trip to Cincinnati took us through Louisville. He could stop at the Louisville airport, pick up a rental car, drive to Cincinnati, do the gig, get up at 6 am the next morning, and drive back to Louisville to catch an early flight.

That was the plan, and it worked. It meant that the three remaining WannaBeatles would be driving Nathan’s new 4Runner back to Nashville with the trailer attached. Nathan was fine with that, and we were too. 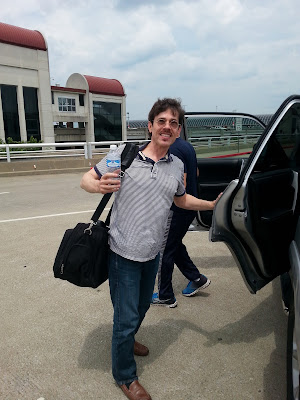 An hour later we were cruising through downtown Cincinnati. 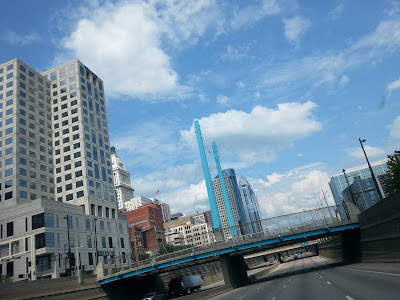 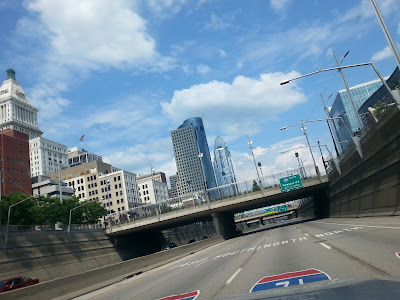 On the interstate through Cincinnati 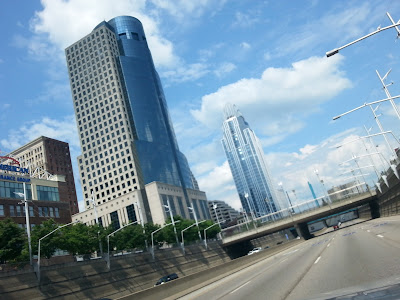 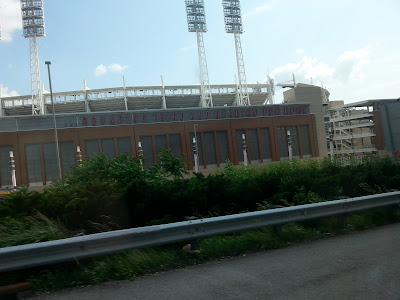 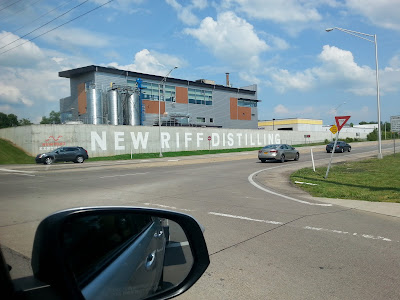 New Riff Distilling, the landmark in Bellevue, Kentucky
a block from our hotel

Nathan arrived shortly after we did at our hotel, the Holiday Inn Express. 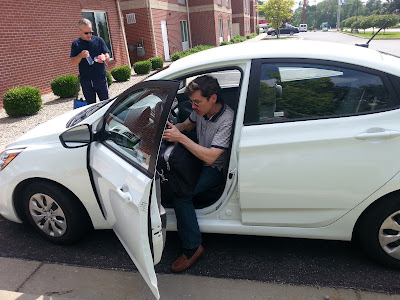 Nathan in his rental car

Then we all drove over to Belterra. 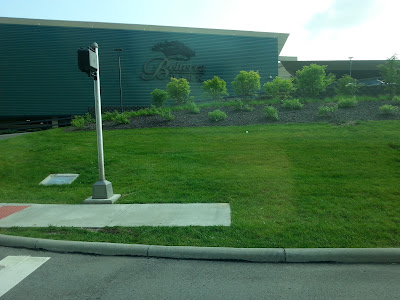 We knew about the track at Belterra, but we hadn’t gotten a good look at it back in January (when it was too cold for horse races anyway.) Now, in May, we could see the full expanse of that mile-long dirt track, forming a huge oval shape, with seats for spectators in bleachers attached to the main building. 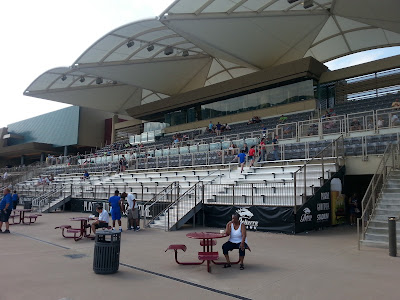 It was exciting to see an actual track up close. 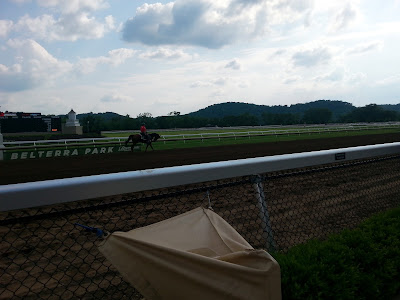 A lone horse checks out the track 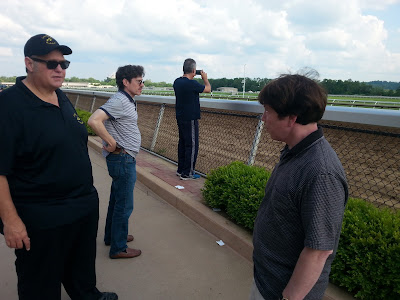 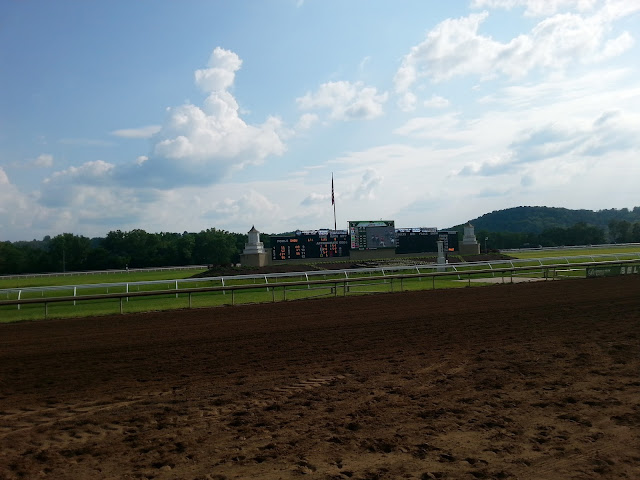 View of screen inside oval track displaying info on each race

We discovered that MTP (visible in upper right corner of screen) stands for “minutes to post,” i.e. how many minutes until the next race begins.

We got to see the last few races of the day, which concluded at 5 pm. 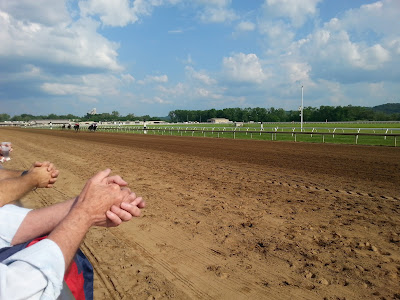 Coming into the final stretch 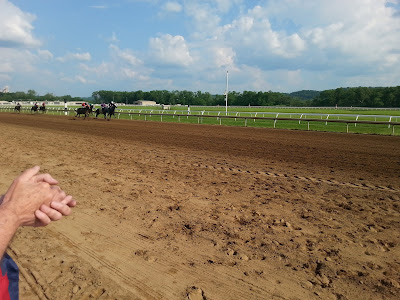 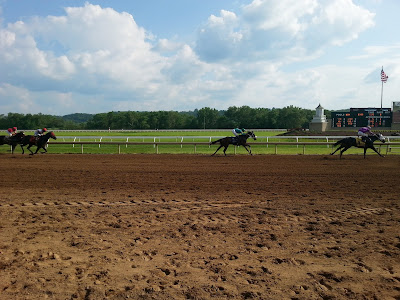 Our show was part of Beterra’s “After Dark: concert series, entertainment on the concrete slab between the bleachers and the race track, which meant we couldn’t begin setting up the stage or any gear until after the last race was finished. 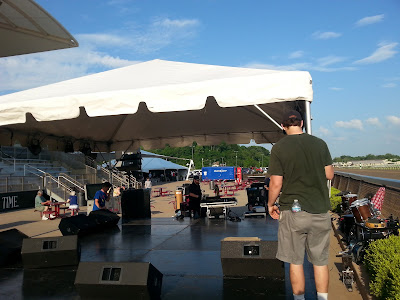 Setting up the stage beside track 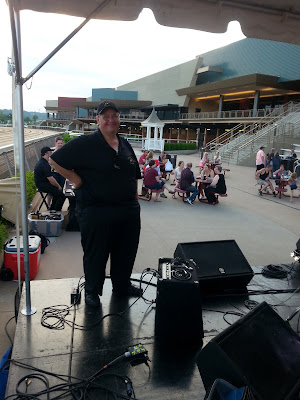 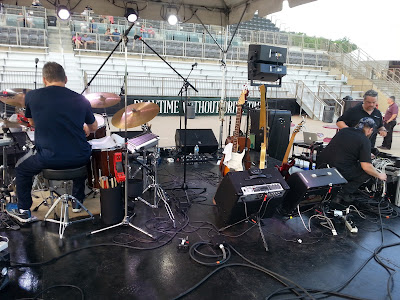 This became a bit of a timing squeeze requiring Leroy to use his influence to get things done quickly and explain to management that the band was ready to play at 7 pm, but the concert hadn’t started because the sound company hadn’t finished setting up the microphones and speakers. 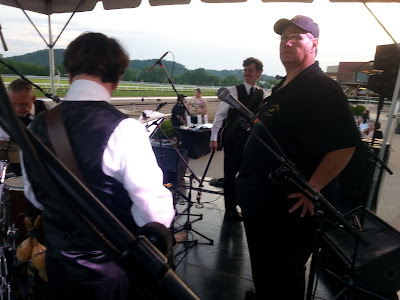 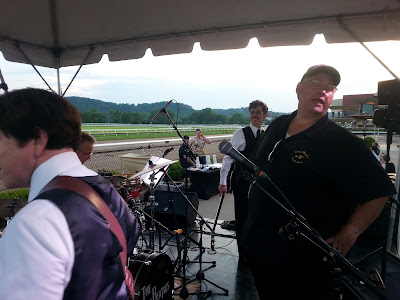 Almost show time...what's the hold up?

We were a few minutes late starting, but soon had the crowd jumping. Volunteers from the audience joined us onstage. 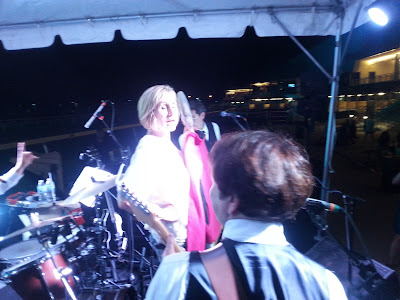 We had a good show, with people dancing and enjoying the music, and expressing their enthusiasm after the show.

Strange Noise from the Trailer

Driving back to the hotel, Nathan commented on what he felt was a rumble that he could hear from the trailer, suggesting either some gear improperly distributed, or maybe some irregular surface on the road. David, generally recognized as The Most Mechanically Minded WannaBeatle, wondered if it could be a loose connection between the trailer hitch and the trailer. Nathan said he had checked to make sure that the trailer was tightened securely to the ball of the trailer hitch, so he eliminated that possibility.

It would be the next day when we would learn more, and encounter an unexpected answer to the question of what was causing the noise.

Our Saturday night concluded with a jovial gathering with Leroy at a local IHOP, with Leroy telling great stories about some of the characters he’s encountered through the years.

Sunday morning, Nathan rose at 6 am, as planned, to join his family in Colorado. The remaining three WannaBeatles attempted to create a “Thank You” photo op to the Holiday Inn Express. It was pale in comparison to a song being sung by the four of us in the lobby, which we had done in January, but would at least demonstrate our willingness to promote the hotel on social media. 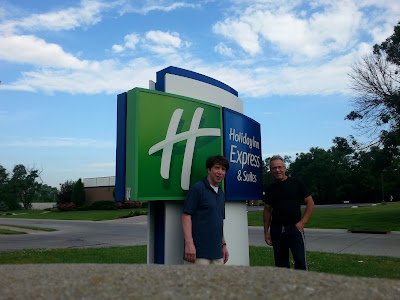 WannaBeatles Dennis and David at the Holiday Inn sign 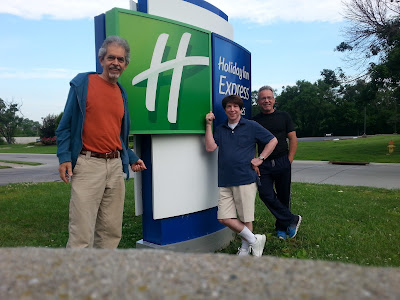 By using the auto timer on the cell phone,
we caught all three of us.

And so, the three remaining WannaBeatles in Nathan’s 4Runner, with U-Haul attached, headed down I-71, south toward home that Sunday morning.

As we pulled over for fuel, we continued to notice the noise coming from the U-Haul trailer. As we were stopped at the gas pump, I took a look at the trailer hitch, noticing that in addition to the part of the trailer that attaches to the ball of the hitch, there is also a nut that secures the ball to the hitch.

I checked and found it slightly loose, and announced that discovery to Dennis and David. At that exact moment, a pick up truck with tool boxes affixed to both sides pulled up at the gas pump next to us. David, noticing this auspicious arrival, asked the driver if he happened to have a large wrench that would allow us to tighten the nut under the hitch.

Within less than a minute, the driver of the truck had looked at our problem, pulled a cordless Makita drill tool out of his truck, affixed the 1 5/8” socket needed, and tightened the nut with a quick blast.

His name is Jeff Gibson. We were marveling at the way the exact person with the exact tool to fix our problem showed up at the exact Kroger gas station along I-71 where we happened to stop. We thanked Jeff profusely and took pictures to commemorate the occasion. 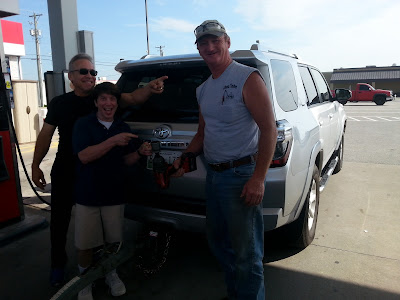 David and Dennis, with Jeff at the trailer hitch 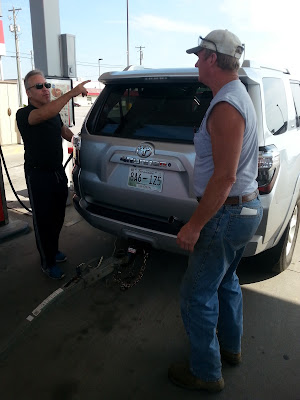 And as we continued our trip along the interstate, we noticed that the trailer was no longer making any funny noises. We felt relieved to be in a safe vehicle again, speculating on what could have happened if our trailer problem had remained unattended - the possibility of the hitch falling apart at high speed, the trailer suddenly falling onto its emergency chain connection, throwing the towing vehicle off balance, precipitating any number of disastrous potential scenarios.

Considering the risk only increased our gratitude for the grace that appeared in the form of a pick up truck driven by the right guy for us at that exact moment. We posted the photos on Facebook, and added sincere praised to God for our deliverance. 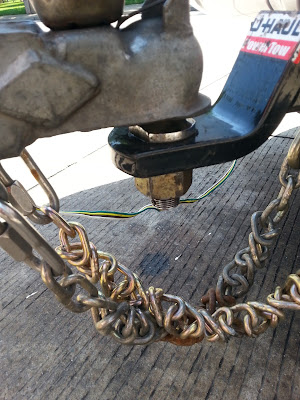 A final close up view of the trailer hitch,
featuring the nut below that was tightened
at exactly the right moment

Meanthile, Nathan, out in Colorado, visited the famous Red Rocks Amphitheater, where The Beatles had played during their ’64 U.S. Tour, and posted a picture of himself there on Facebook.

So The WannaBeatles had another adventure, this time across three time zones, and involving a small miracle that a U-Haul trailer could return safely to Nashville.

We wanna thank Leroy from bringing us up to Belterra, Nathan for letting us use his 4Runner while he was gone, and Jeff Gibson for the timely use of his Makita drill to solve what could have been a big problem. And so we have a reason to say we’re grateful to God. Sometimes His grace pours down in such an easy and obvious way it's hard to miss.

Posted by The Wannabeatles at 1:57 PM