Welcome to the Blog of the Year.

Looking back, it was November 2016, after having posted 150 blogs in four years, that I took a break from blogging about The WannaBeatles. The next year, 2017, I posted only one blog, about our working up a medley of songs from 1967, an enjoyable fresh musical project for us.

Here it is 2018, near the end of the year, and The WannaBeatles have again engaged a project that feels like a big creative step forward, so it’s worth writing about.

We accepted an invitation to play a Christmas show, December 3, at Tellico Village Baptist Church, in Loudon, Tennessee.

Here's the poster that was made by superimposing Santa hats on our heads.

It’s all new material, over an hour in performance, ranging from traditional Christmas Carols to familiar favorites. It also includes four original songs, one from each group member, all very different from each other but appropriate for the occasion.

The inclusion of the original material represents a major breakthrough in our history. We’re all songwriters, which is part of how and why the Beatles inspired us. And yet, it’s been a struggle to work that portion of our identity into what we end up presenting to the public. So this opportunity to include our own songs into our setlist, even though there’s a lot of work involved, is also deeply gratifying, and an encouraging sign for our future.

The deadline of December 3 gave us a big challenge, selecting all the songs, working up our own arrangements, and figuring out the right order. From three months out, with all the other gigs we had, we realized that even rehearsing weekly would be inadequate time to prepare. It felt like trying to design and construct a two story house in a few weeks.

An important part of this story is our relationship with Charlie Barnard, the pastor of the church. He first hired us in 2015, for a community picnic in their church parking lot. It turned out to be a rainy day, so they moved the show indoors, to their fellowship hall, which accommodated 700 people. It was packed, and the people loved what we did.

That first visit, July 2015, was documented in this blog: https://thewannabeatles.blogspot.com/2015/09/fourth-of-july-pt-3.html

And here’s a quote:

To give you an idea of Charlie's sense of adventure, here's the photo we got of him and his wife Teresa on their Yamaha motorcyle:

And when we returned in April 2016, it produced another blog: https://thewannabeatles.blogspot.com/2016/06/tellico.html

And here’s another quote, demonstrating what a generous down-to-earth guy Charlie is:

When we arrived, we were greeted by Charlie and several other church members ready to help us unload.

So this year, Charlie invited us to play a Christmas show. Because it’s in the church sanctuary rather than the fellowship hall, and because it’s during Christmas season, it makes sense that we would tailor the songs to suit the occasion.

Because two WannaBeatles, David and Nathan, are professionally employed as church musicians, they have experience in this area. WannaBeatle David, in particular, has seen in this show the opportunity to establish a more worshipful attitude for the congregation.

It was with this goal in mind that David suggested “Have You Heard” as an opening song - a slow anthemic song written twenty years ago by my wife Holly and me. David has performed the song several times at his church, so he knows it well. I was open to the idea, seeing that the song would be appropriate, but not motivated to advocate its inclusion. My song was being promoted by someone else. That was one of the first signs that this would be a special gig.

Much of our discussion bounced between two different schools of thought: David’s traditional church worship experience contrasting with Dennis’s far more secular impulses as an entertainer. For Dennis, making the crowd happy is job number one, and in his experience, a song like “Santa Claus is Coming To Town” does the job. David, while aware of the professional requirements of our performance, is also thinking of a church service, and the reverential attitude that certain sacred music can help elicit.

We’ve never been in a situation like this before. It’s a concert in a church, but not a church “service.” We’re not sure exactly how to walk that line. So it’s a process, taking what is valuable from each particular approach, along with conversations with Charlie about what he wants and expects. In a sense, Charlie is our employer, so our job is to fulfill his expectations.

Part of what makes Charlie an effective leader is the wisdom to recognize and encourage the creative ability in other people And he has given us lots of room for coming up with things that we believe will work. He trusts us. And that has given us the chance to pursue our own creative abilities and desires, as individuals and as a group.

The WannaBeatles have been expanding our boundaries. We started by concentrating on Beatles songs, then opened up the repertoire with a medley of songs from 1967, none of them by the Beatles. And now we’re working up an even more diverse show, which includes only two Beatles songs, out of nearly two dozen.

It’s a big stretch for us, producing a mixture of pride and exhaustion. We’re excited to be working on a new show, putting lots of creative touches into the music, while feeling the pressure of getting all the new material ready, squeezing extra rehearsals into our schedules, and still not sure we have everything down.

Dennis, as the experienced show biz pro, has brought in classic songs like “Let It Snow” and “White Christmas.” We all wanted to include the beautiful “Mary Did You Know,” written by Nashville songwriters Mark Lowry and Buddy Greene.

We had worked up some Beatlesque versions of some Christmas songs before, like a version of “Joy To The World” treated like The Beatles early hit “Please Please Me.” We did that song two Decembers ago for our first Facebook live video, for which we dressed in seasonal garb, and generated thousands of views within a day, thanks to the vedography and technical skills of our friend Johnathan Pushkar.

Here's a photo of us in that facebook video: 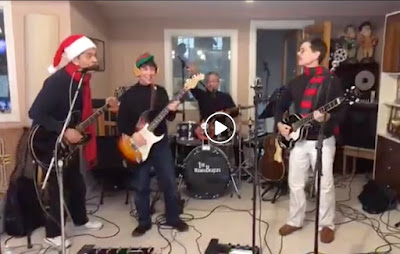 and a link to the video, if you wanna hear us do the song:
WannaBeatles "Joy To The World" for Facebook Live

But one of the most surprising and satisfying parts of this new show was the inclusion of original songs. As it turned out, each of the WannaBeatles had an original song that we had not heard before, each of which became an appropriate addition to the show. And each song, besides contributing to the overall mood of celebration, also represented the amazing diversity of the group.

We had decided to open the concert with the slow and serious “Have You Heard.” That was followed by Dennis’s light hearted charming pop song “It’s Christmas Time.” Nathan sings an energetic gospel song built around a rhythmic and adventurous piano part called “Born a Baby.” David has a lovely worship song that he used to perform with his Christian group back in Florida, called “Dwell In The House of the Lord,” which we did near the end of the concert.

On top of all this, we worked up our own versions of “Little Drummer Boy,” featuring David’s Cuban drumming prowess, “My Favorite Things,” with Dennis getting into Barry Manilow territory, and a jazzy bossa nova version of “Silent Night.” Nathan has also arranged a lengthy medley of familiar carols as a singalong.

It’s an incredibly diverse and enjoyable collection of songs. We were excited to put it together, and to bring it to Tellico Village Monday night. We had never seen the sanctuary before. It was a beautiful space, decorated with poinsettias and greenery. We had our trusted sound man Allan Waugh, along with talented young audio assistant Steven English. 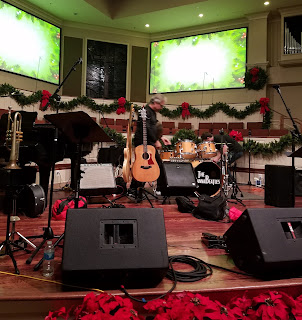 How the stage appeared before the concert

Charlie had pastors from other churches to join him onstage, to read sections from scripture to and pray. It was a very brief but appropriate way to establish an atmosphere, a perfect way for us to begin with “Have You Heard.” We got through our two  shows with certain minor mistakes, and corrections, but the overwhelming response from the crowd was very enthusiastic.

Thanks especially to Charlie Barnard at Tellico Village Baptist Church fior being such a creative an supportive friend. We love playing there. We’re very happy to have worked up this very special show. And we hope to perform it again, and to take it many other places.

After all, it looks like Christmas is here to stay.

Posted by The Wannabeatles at 5:51 PM