Baby You Can Drive My Rig

Thursday the WannaBeatles were interviewed for a truck drivers audio magazine.

Strange? Well, it was new to us.

But the format was pretty familiar and the experience was tons of fun.

Here's how it happened. Darcy Young, the hostess of this particular show, contacted us to participate. We found a time to gather at their studio in Cool Springs, for 45 minutes of interview, plus live acoustic performances, and a few of our recordings thrown in.

It was similar to a live radio interview. We've done a few of those, on two local stations, Hippie Radio 94.5 and The Rock 105.9. We enjoy the casual atmosphere, and singing and playing live unplugged versions of our songs.

But this was not for radio. This was for a series of CDs which are distributed to truck drivers for them to listen to while they're driving. The CDs are not sold to the drivers, but included in packages that the transportation companies distribute to their drivers.

So our interview with Darcy was going to be heard by truck drivers playing the CDs in their rigs.

The company that produces the CDs is called S and E, (named for Smith and Edwards, the two partners whom we met there - Greg and David). It's suite of well-equipped offices located in the calm semi-industrial part of Cool Springs.

Darcy greeted us there, and led us back to the studio, which resembles a radio studio, with a couple of classic microphones on large suspended arms. There was another microphone for Darcy, and a table where she and her guests sit to talk.

We brought an acoustic guitar and a small keyboard, but everything was captured on the two microphones.

Greg Smith was our engineer, located in the room next door. Darcy would be talking to him on her microphone, taking suggestions on which one of us should get closer to the microphone. We sang a bit of our four part harmony on "I'll Be Back," which is our usual sound check, and Greg said it sounded fine. He used the stereo capability to pan us left and right, between the two microphones, which is something that wouldn't have happened on a radio interview. 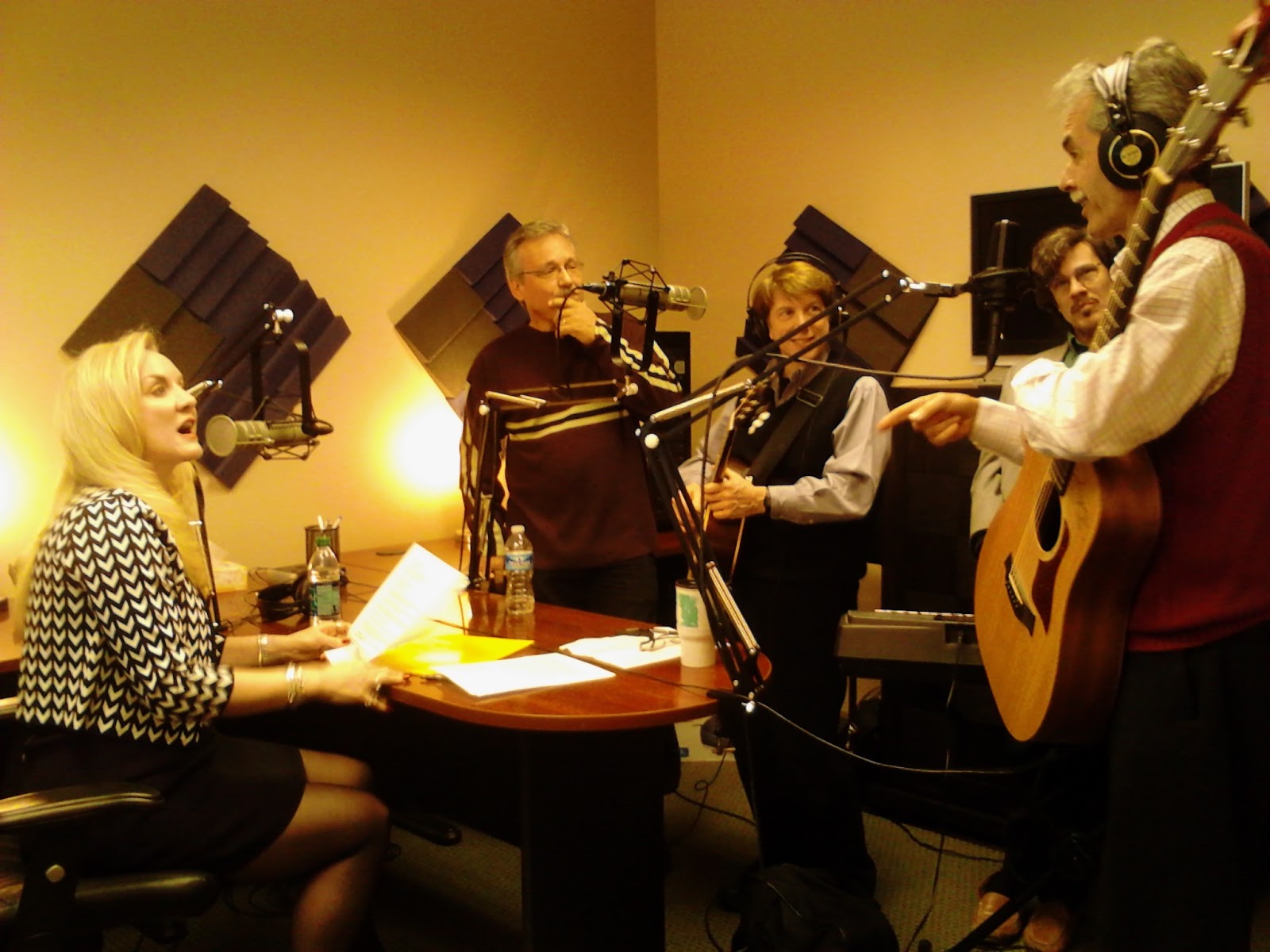 And unlike a radio interview, we could go back and repair mistakes.

Darcy had just listened to our Grammy nominated "Fab Fan Memories" CD, which gave us a chance to talk about the stories on that album. We mentioned having Louise Harrison, George's sister, as our host on the CD. That reminded us of our song "Louise," which will be on our new CD.

We told stories that were not on the CD. I recalled the time I briefly met John Lennon, at the Record Plant in NYC in 1975, a fact I had not told the other WannaBeatles before we recorded "Fab Fan Memories." (shame on me.)

We joked around and laughed a lot. Darcy really knows how to make an interview fun.

When we started singing "Drive My Car,"  we wound up spontaneously replacing the chorus with "Baby you can drive my rig," which made us scramble for another line that would rhyme. I think I sang "Yes I'm gonna be a pig," which rhymes, but hardly makes sense. Everybody else was singing something else.

It was after the session when Dennis said we should have sung "Even though it's rather big," or something like that for the second line of the chorus. I knew Dennis could come up with some great alternate lyrics for a trucker's version of a Beatles song, and thought it would be a great addition to another CD, but he didn't' think it would be a good use of our time and energy.

We gathered in their lobby for a few photos, which Darcy said she's post on Facebook. After a very enjoyable time at S and E studios, we left, to go to our usual Thursday rehearsal.


Nathan, Bryan, Darcy, Dennis, and David in the lobby of S and E after the interview

I sure hope the truck drivers who listen to that CD enjoy listening to it as much as we enjoyed making it.