One great thing about the internet is its ability to document and spread the word about inspiring events.

A delightful example would be those videos that start in ordinary public spaces, like a train station or a shopping mall, then one person begins to sing, or play a musical instrument. Gradually more "bystanders" join in, and it becomes apparent that an entire professional performance has been planned, as a surprise to all the others there.

It's a beautiful thing to see, a group of everyday commuters responding to an unexpected performance of beautiful music during their day. The performers clearly enjoy the reactions, knowing that the response is totally authentic. They see smiles, looks of disbelief, curiosity, expressions of joy - a sense of being suddenly released from the humdrum routine, and discovering the possibilities of creative freedom.

Because it's not a scheduled or paid performance (at least not paid via ticket sales) it's a radical business model. It's not really a business model at all. The performers' love for what they do is built into the premise. That's part of its charm. It's a living example of  a "random act of beauty," and in its own way a profoundly revolutionary act.

We've enjoyed several of these videos over the last few years. We've noticed that most of them originate in Europe, and often use classical music or well known hymns.

Or a show tune. Here's one from 2009, which uses Julie Andrews singing "Do Re Mi" as the soundtrack to a huge dance performed in the Antwerp train station. It's been viewed over 10 million times.

Just this week, we discovered a name for the phenomenon: flash mob.

And we found another example, this time with a Beatles song, sung in an unemployment office in Madrid.

The song is "Here Comes The Sun," one of those dispatches of optimism that songwriters can't help writing every now and then.

This one is from George Harrison, the usually overlooked songwriter among the Beatles, who, by the time of Abbey Road, had risen to his place as an equal to the other fine writers in the group.

The video includes the lyrics translated into Spanish, with "Little darlin'" coming out as "carino." There are no drums or guitars - only voices and orchestral instruments. They stumble a little bit at the tricky 5/4 bars in the middle, but no one complains. The point is not perfection - it's the invitation to a new level of creative enjoyment, and, like love, it never fails.

The WannaBeatles would love to be part of a flash mob. Dennis, our fearless leader, saw our airport show today as an opportunity to team up with some willing performers. He contacted a dance coach at Vanderbilt who had done similar things with her dance class, and the discussion went from possible to plausible. The problem was that today was the beginning of spring break, which meant her students would be unavailable.

So we may have missed this chance, but we want everyone to know where our heart is. We love the idea of music erupting unexpectedly in public places, and giving everyone a good time.

In certain ways,the flash mob phenomenon recaptures some of the idealism that many people see as an important part of what the Beatles, and the sixties, were all about. So much of the "counterculture" was about challenging boundaries and expectations, searching for a new level of freedom. It's a complicated story how freedom and happiness can coexist with maturity and responsibility - nothing happens by accident. But let us say that we are not conventional performers; we're happy to earn a living doing this, but we don't measure our rewards with showtimes and ticket sales.

Today in the airport, we could see people's reactions, as they would sing along, dance with their kids, and otherwise enjoy the music. We saw proof that Beatles songs are a great way for people to have fun. For us,  the Beatles songs are just the vehicle, it's the fun that counts - the pure joy of music.

I wish we had footage of people who stopped to enjoy the music with us today. Here's a photo of Dennis and me pretending to be guitar heroes during "Come Together." You'll have to take our word for it that people were singing along. It wasn't quite a flash mob, but it was a step in the right direction. 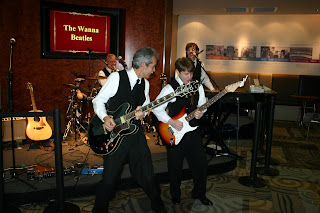 We're after the heart of the experience, and flash mobs seem to be a great way to express that. We know plenty of music that makes people happy, so next time you have the impulse to participate in a flash mob, be sure to think of Beatles songs and let us know. We'll keep your secret until the time arrives that the surprise is revealed.

Bloggin' Bryan 1Mar13
Posted by The Wannabeatles at 8:36 PM