The deadline for our album is still alive, which means we have only a few days to get our final musical parts recorded. The mixing begins next Tuesday.

But the news that it must be done soon or not get done has sparked a burst of creativity. It could be that we fear that the opportunity may not come again. After all, making music is fun, but it costs money, and there's no guarantee that we'll even recover the costs of putting out this CD.

But that doesn't stop us. We're using the studio for every advantage it can possibly yield, and that includes overdubbing percussion, strings, and horns. In fact, we've used  the four home studios of each of the WannaBeatles to get this done.

It's our way of honoring what the Beatles did. They became popular as a rock band who wrote their own songs, but within a few years developed into a studio band that used recording technology to present their songs in very imaginative and exotic sonic attire. Their growth enriched the entire palette of popular music.

With the Beatles, it was partly a collaboration with their gifted producer, George Martin, who was very adept at writing, and conducting, complementary orchestral parts to enliven their songs, or helping them find unusual instruments to flavor the sound, like the piccolo trumpet on "Penny Lane" or the accordion and tambourine on "We Can Work It Out."

One of the joys of being in the WannaBeatles is realizing that we have all that arranging talent built into the band. Each of us is capable of composing and writing out parts for horns or strings, so we have an abundance of ideas, and we have each other to check on whatever ideas get used.

We decided to use a string quartet on two songs. Dennis's studio is large enough to accommodate four players. We had already worked with a string quartet last summer, when they joined us onstage at Crockett Park, for the two most famous examples of Beatles songs with string quartets, "Yesterday" and "Eleanor Rigby." We called Lauren Conklin, violinist, who called the other players.

On our current CD, the songs that we're adding strings to are "If We Simply Love" and "In '63." David spent at least a day in the studio working on the parts for his song ("If We Simply Love,") and Nathan came up with a part for "In '63," which is  a special tribute to Virginia Beach.

We will be playing in Virginia Beach this summer, and we'll be performing with a local orchestra. Nathan has taken on most of the work of preparing the charts for them to play. It turns out that Virginia Beach is celebrating their 50th anniversary as a community. Dennis volunteered to write a special song for them, to be played with the orchestra. That means that it makes sense to put string parts on the song now, while we have the chance.

For those of you who don't know, the string quartet is a classic format for composers. It consists of two violins, one viola and one cello, covering almost the entire range of the orchestra. Most of the great names, Beethoven among the most famous, have written music for this format. So the idea of four people making music together is a serendipitous historic theme that undergirds our efforts this way.

David and Nathan are both capable arrangers, and both use their ability each week in their respective roles as worship musicians. If I could find a single word that would identify the style of each man's string writing, I would say "passionate" for David, and "stately" for Nathan.

David's song is a soulful ballad, with a deep message. He has made it quite beautiful, even before strings were added. And now it has another layer of beauty.

Nathan's parts for "In '63" give the song a very "uptown" elegance. It has the sophistication of those richly textured records produced in Philadelphia in the 70's - mostly Gamble and Huff productions, with groups like the Spinners and O'Jays.

Dennis and I both find that Nathan's parts on "In '63" remind us of Elton John's "Philadelphia Freedom."

Here are photos from the string session. First, David going over the charts. 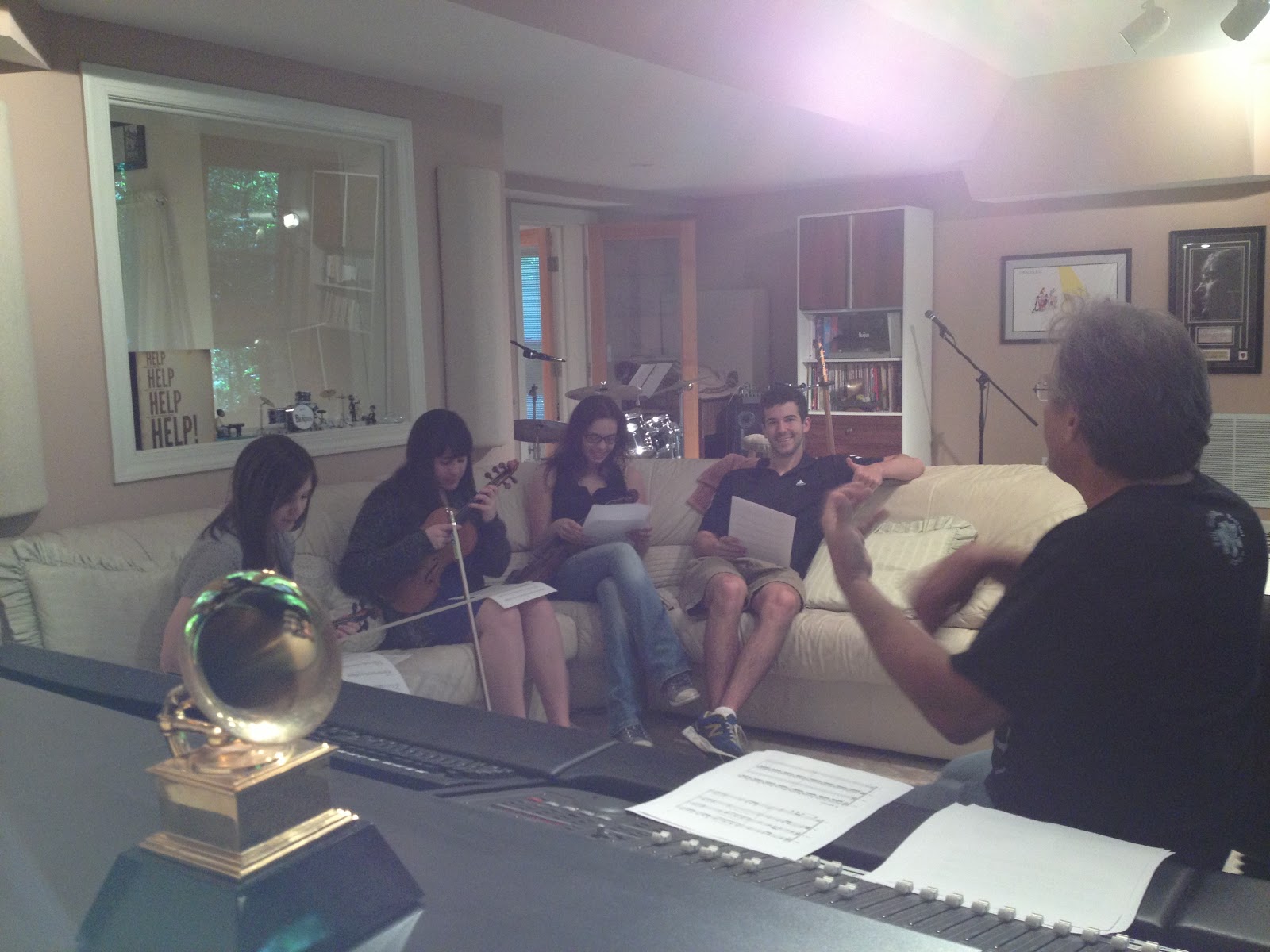 Here they are working on their parts. 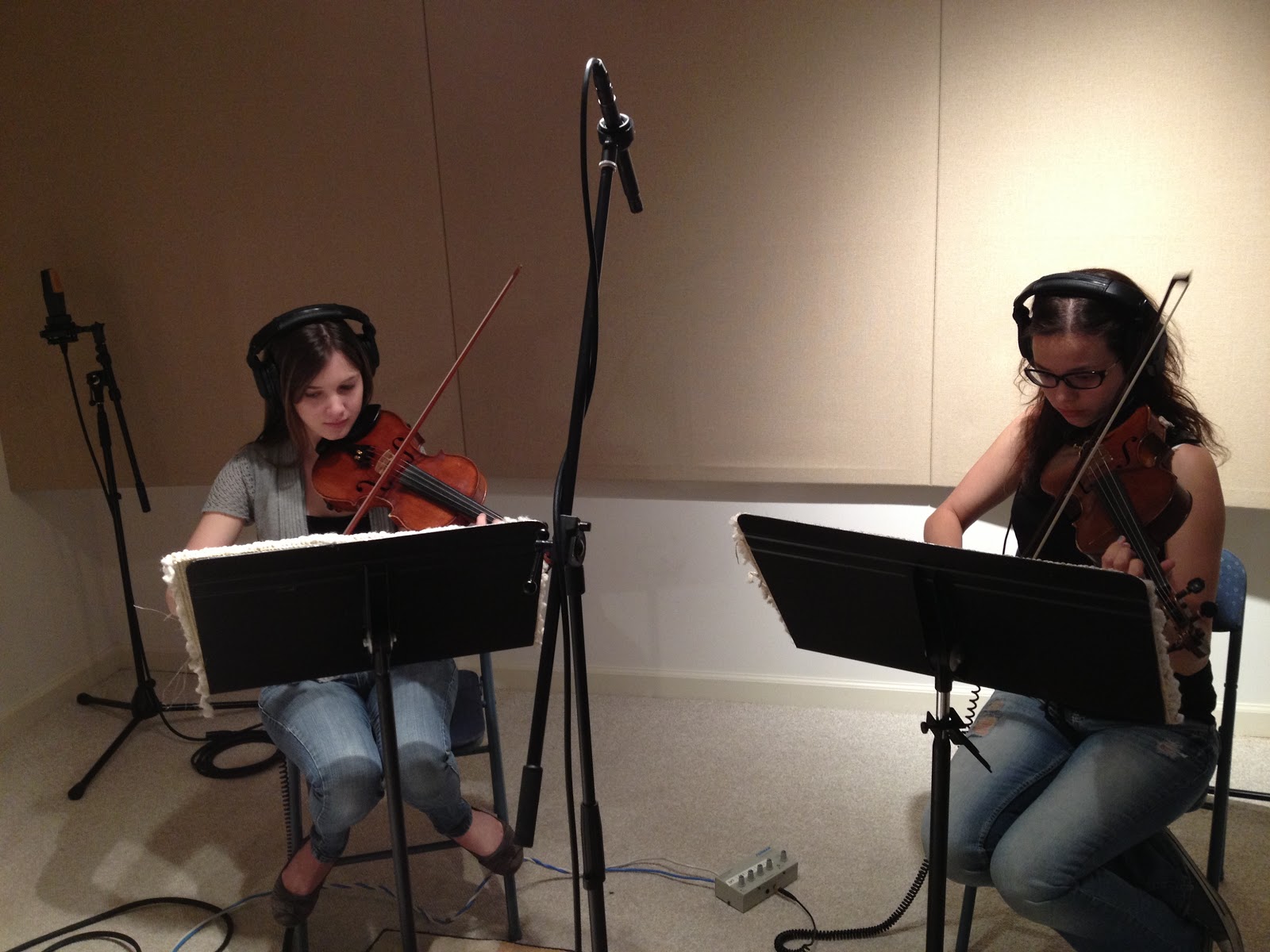 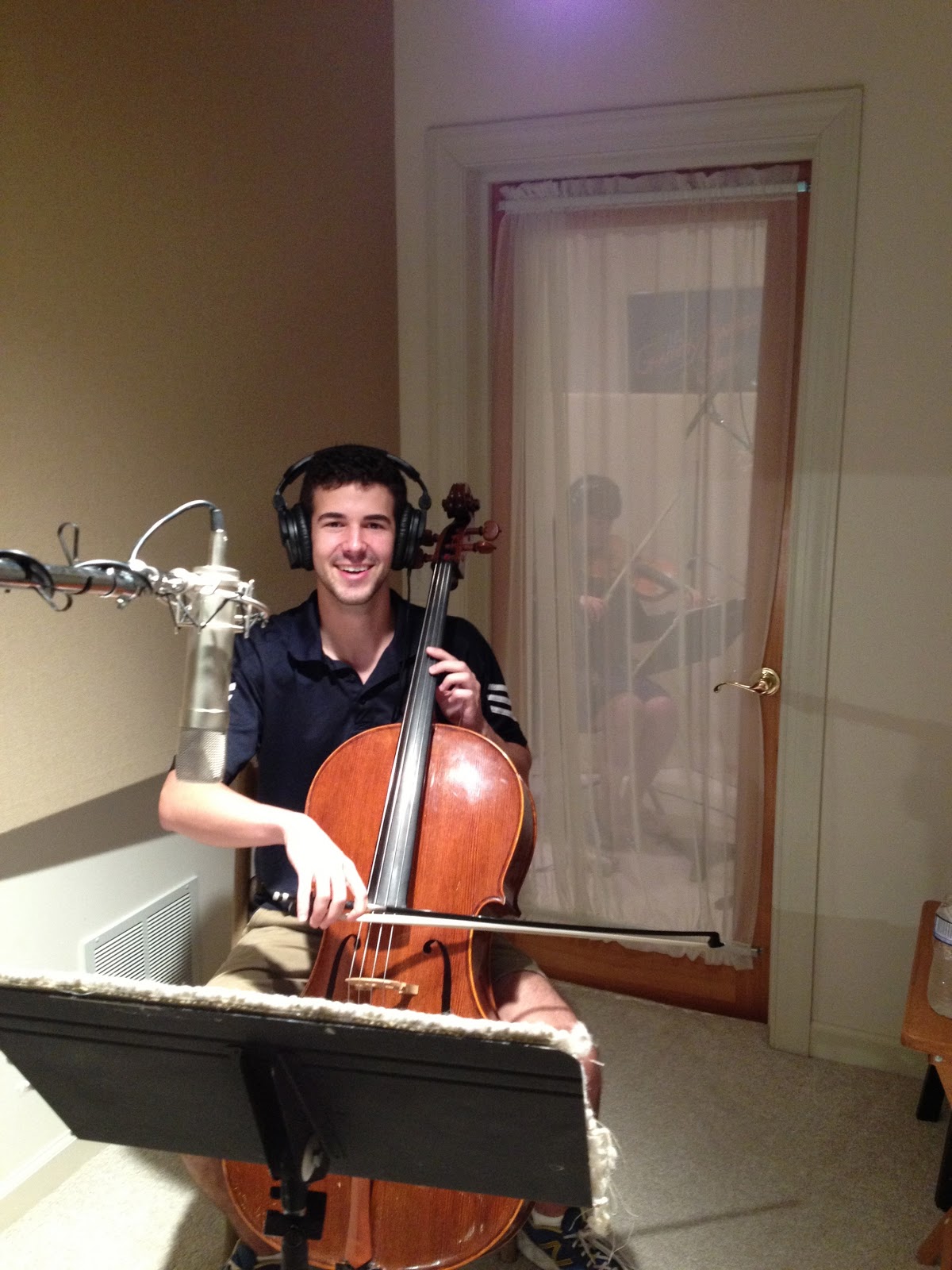 Here's the cellist, Ben Johnson, in another room. 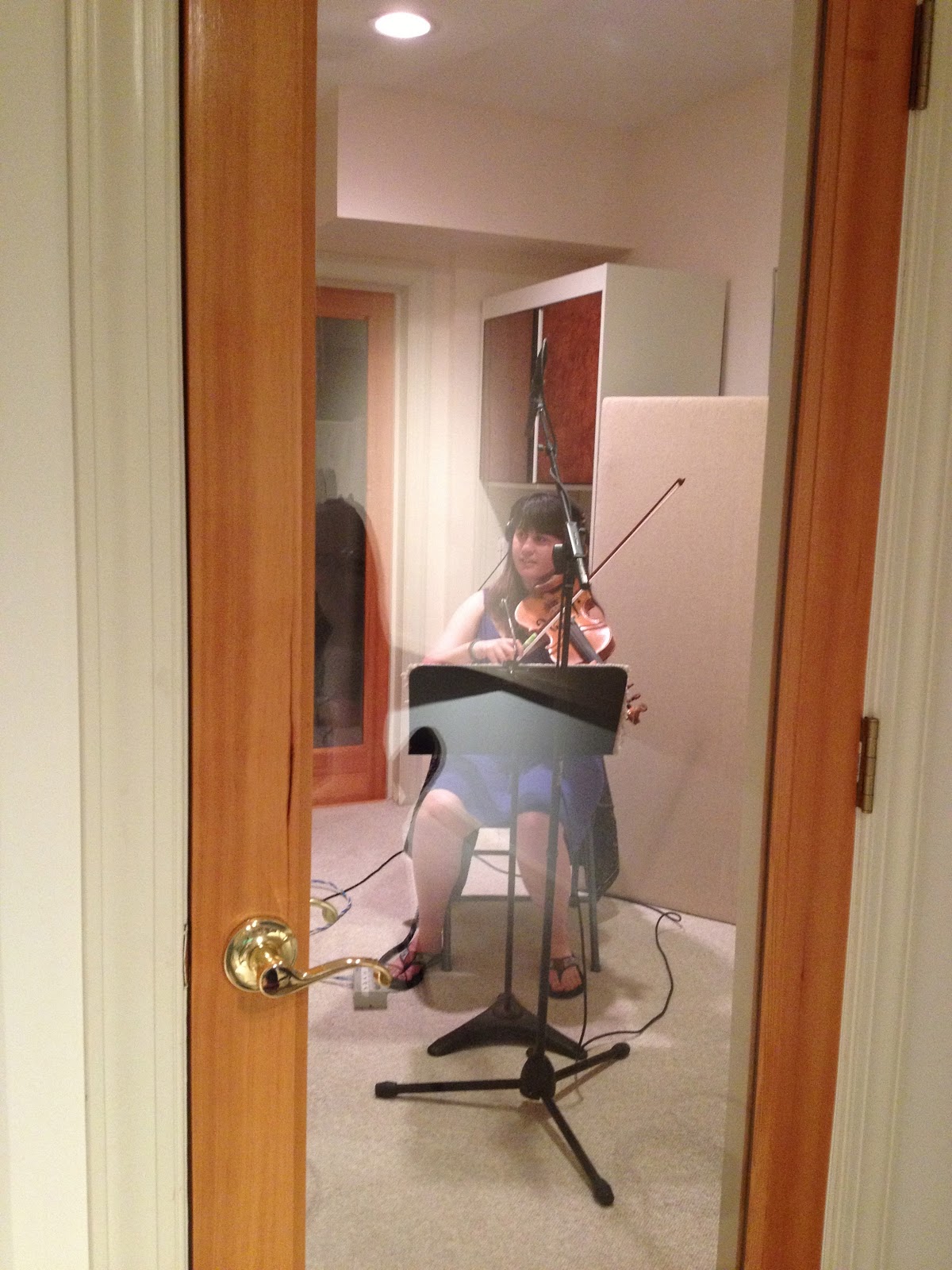 And the viola player, Megan Bilodaeu, through the glass in another room.

Nathan's song "Bristol Lights" is a tribute to his hometown, Bristol, Vermont. The chorus includes a reference to a "band playing Sousa from the bandstand on the green." That line inspired Dennis to suggest a brass band, somewhat like the way a band interlude is used in the song "Leader of the Band," Dan Fogelberg's tribute to his father.

Nathan was happy to write out a band arrangement, in a very authentic concert band style. He brought the trumpet parts to me, which we recorded here in my studio. He called up two other players he knows from church, to play trombone and tuba.

Nathan recorded those parts at his studio, which is rarely used for anything besides his own scoring duties. So, once again, the WannaBeatles are breaking new ground, boldly daring to go where no Beatles band has gone before.

Here are the shots from Nathan's sessions with Varney and Oscar. 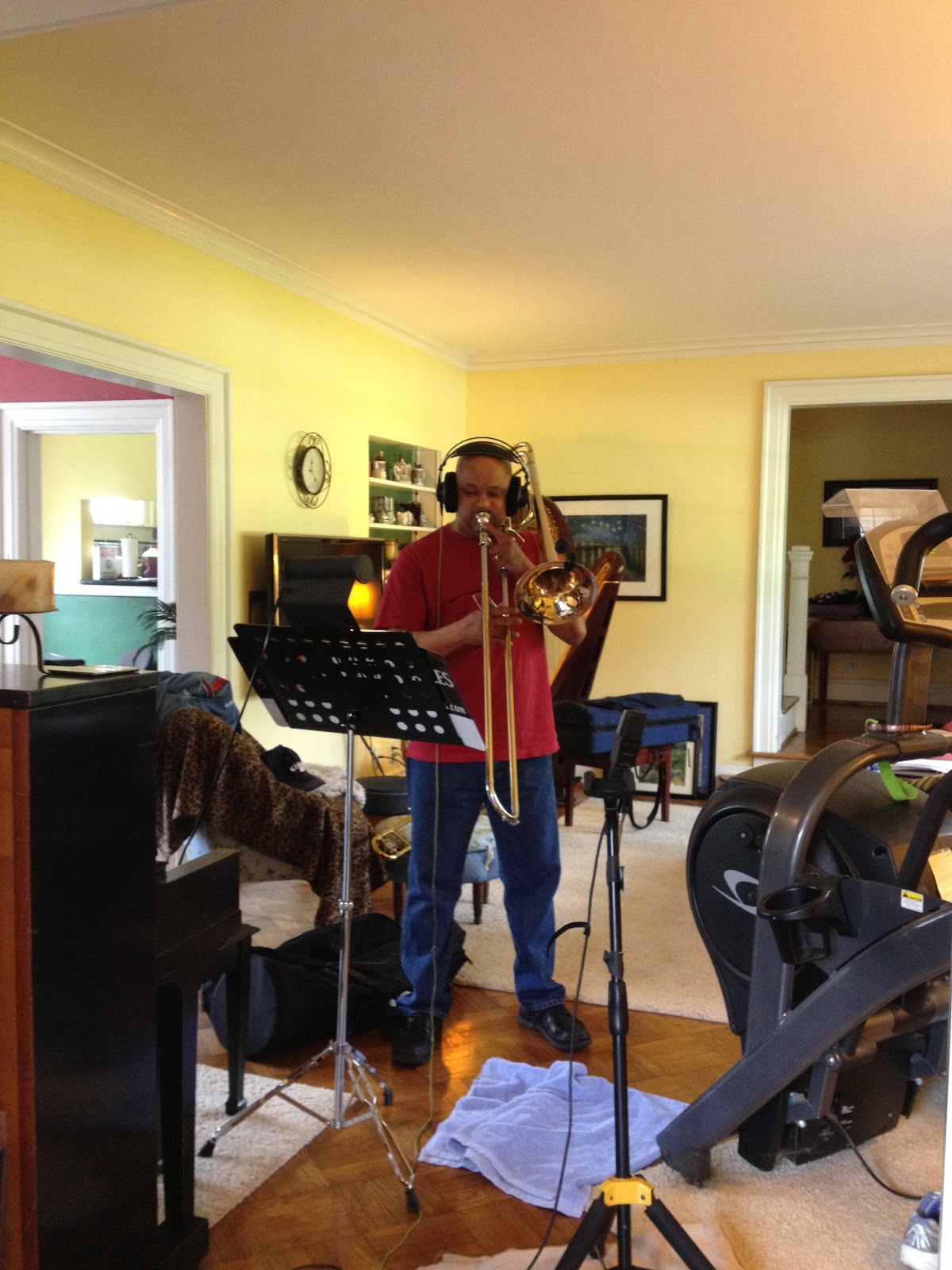 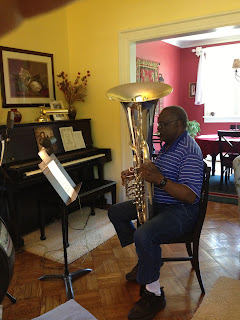 Varney is a musician who plays at The Temple, the church where Nathan works as an organist and arranger. Oscar is a friend Nathan met through other connections.

In addition to these, there are percussion overdubs by David's buddy Billy Ramirez.

Billy brought his congas and other toys into Dennis's studio. The target song was "Let's Run Away," which has a Latin feel in the verses. Billy played a perfect part in one pass, so Dennis took the opportunity to add him to other songs. David tells me that the fun noises added to "License To Spy" take the song to a new level of insanity. I haven't heard it yet, but I will soon enough.

Sorry there's no photo of Billy.

We are very grateful for the musicians who have joined us in this great adventure. It's very gratifying to imagine, and then to realize, music that is bigger than just one, or two or even four people can make on their own. We're happy to have all their names included on the credits of our album cover.

We're glad to be making music in Music City. We're excited about this project.

We hope you are too. It's still on schedule...stay tuned.

Posted by The Wannabeatles at 4:15 AM