Last week, we had spent several days bouncing ideas around for this song "We're Still Rockin.'" I wrote the blog about it, and got some interesting responses on our facebook page.

One reader, David Walker, suggested we come up with a "Hard Day's Night" sort of mystery chord, to begin the song. That's a chord that fascinates Beatles fans. There are numerous youtube studies of its components, and theories about its ambiguous tonal quality. We've done our time studying it ourselves.

I thanked David for the creative suggestion, without thinking it would have any application to our song, which starts with a drum solo. But the creative process is full of surprises.

We were working on guitar parts for the song yesterday, with me playing my Line 6 Variax through the POD HD 500, with David making suggestions, and getting excited when I landed upon this or that guitar sound.

"We're Still Rockin'" is in the key of A, which opens up certain possibilities on guitar. In last week's blog, we talked about how, after listening to Mellencamp's "R.O.C.K. in the U.S.A." we got inspired to try a simple flailing rhythm part, which lets the A string ring. There's also an historic model in Peter Townsend, who plays a lot of Who songs in A, and loves the power of that sound, built over the ringing A string.

The chorus is in a different key, but it concludes with an A chord, which rings as the drums pick up the groove. As a variation on that chord, I slid one note, on the D string, up to an A, letting it ring along with the low A, to reinforce the sustaining root note. That was my intention, but my right hand was sloppy, as I hit the B string, along the upper E, at the same time.

David's ears perked up, and he smiled. "Yes!" he said. "That ninth on top!" My mistake became his harmonic treat. David is a great explorer of guitar possibilities.

He got that look on his face and said, "You're probably not gonna like this…." which is always a sign of a fresh idea brewing in his mind. He liked the sound of that chord (with the added ninth) so much that he wanted to use it as a new intro to the song, preceding the drum solo. I thought it was a pretty cool idea. Dennis was up for trying it.

So we went to the intro, played that ringing chord, with the B added, and then used a different guitar sound to play a supportive chord on another track. We were adding notes, building a mystery - almost exactly like the way the opening chord functions in "Hard Day's Night."

So we were arriving, with no intention of going there, at a place that someone had suggested in response to last week's blog, which had seemed totally unlikely at the time.

Meanwhile, Nathan added some piano parts, finding an upper range pattern that resembles the piano from Roy Orbison's "Oh Pretty Woman." That classic record was recorded in Nashville, so we were reaching for influences close to home.

David had started the week recommending that we buy a drum software program called Trigger, which would allow him to use "world class" drum sounds to replace his own drums after he recorded them. He then had a conversation with Gary Dales, our mix engineer, who convinced him instead to buy new heads for his drums, which would help improve the quality of the original sound.

David has a home studio, and a drum kit set up, with microphones to record the whole kit. Typically, he listens to a song - minus the drums - on his headphones, then records his drum part, and sends the audio files to Dennis, where they're added to the song being mixed. That's been our way of operating, which saves the time and trouble of bringing the drums to Dennis's house, setting them up, recording them, taking them back, etc.

Dennis has a separate room for recording drums, along with a practice set in the main room where we rehearse. It's the drum kit that Ryan learned "Come Together" when he was ten, which is featured in an earlier blog and video.

It's the kit seen in our special clarinet video, for "When I'm Sixty Four." Here's the link: http://youtu.be/w_dFoTOYq_0

It's been very useful to us, since David can come to rehearsals without bringing his drums.

But now we're in a new era of working together on our own album, and we want the maximum opportunity for group interaction and group effort. Yesterday David stopped at Fork's to get new heads on his way to Dennis's, then took his time setting up his nice Yamaha kit, tweaking the heads, using WD-40 to remove squeaks, tuning each drum. He spent hours on it, and came out saying his kick drum had never sounded so good. 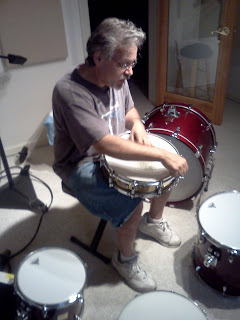 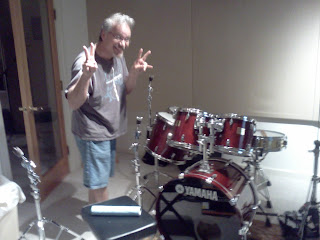 The kit assembled in its new room

Now the plan is to get a batch of songs ready for David to play drums on. We have "Now We're Rockin'," the high energy song David's already played on, but which will have a new track, featuring a new surprising guitar chord at the beginning - unless we change our minds.

We have "If We Knew Then," a mid-tempo song that came from a set of lyrics Dennis wrote five years ago, during the early WannaBeatles period. We have "If We Simply Love," David's inspirational ballad. We have "Bristol Lights," Nathan's song about his home town in Vermont.

We have "In '63," a rocking reminiscence that Dennis has assembled especially for a gig this summer we're playing in Virginia Beach, which is celebrating its 50th anniversary this year. We may have a few others. But time is growing short. We have a deadline, and we need to get the tracks recorded so that we can mix the songs and get the record finished in time to release it before our Crockett Park show on June 23.

This process is really the part of our adventure we've been dreaming about for years - being in the studio, creating music together, and knowing that it will sound good and make people happy.

Maybe that sounds overly optimistic. We're not four lads from Liverpool with nothing else to do - we've all got wives, children, responsibilities. But we're aware of how their creative accomplishments inspired so many others to follow that dream, and we're glad to be this far into the practical reality of realizing it.

We look forward to sharing the results with you in about six weeks. Let the music do the talking.

Posted by The Wannabeatles at 8:59 AM