Georgia On Our Minds


We just finished a fun weekend of travel. Well, two nights in a row - a Thursday and Friday, driving home on Saturday - not exactly a weekend.

And because the first night was in Lebanon, less than an hour from Nashville, we could sleep in our own beds that night, then leave the next morning for our show in Georgia.

WannaBeatle David, being a drummer and acutely aware of the physical process of loading gear, mentioned earlier in the week that it would make sense for us to have a trailer at the gig in Lebanon, so we could pack our gear into it that night, to be ready to leave early the next morning for Georgia.

So that's what we did.

And now, for some visual aids, to enliven the report: 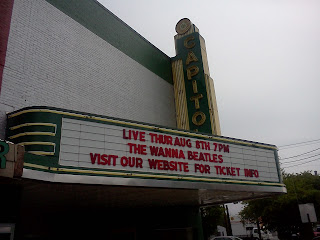 It was decorated with lots of movie posters.

Here's the new entrance.  I like the contrasting colors and geometric shapes of the tile. 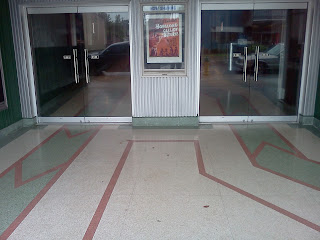 David and Dennis in our nice dressing room before the show. 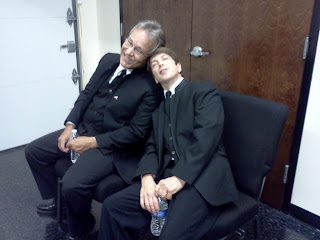 One friend who showed up is Butch Baker, a singer I've known and enjoyed for years. Butch came backstage to see me, and I was happy to see him. 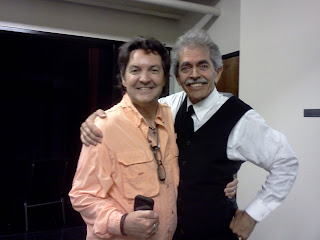 As it turns out, the woman who booked us at the Capitol Theater, Amy Harris, is also a friend of his, and they both attend the church where WannaBeatle David works at worship leader.

Our show in Lebanon included a local string quartet, who joined us on "Yesterday," "Elanor Rigby," "Live and Let Die," and "Back In The U.S.S.R."  This was plenty of fun for us, and for them, and for the parents of the young musicians.

And so we packed our gear into the trailer that night, then Nathan kept it at his house, while we all slept in our own homes.

The next morning, we took off for Covington, Ga., which is about an hour east of Atlanta. Although it was raining in the morning, there were no major snags, and we pulled into Covington around 3 pm, with blue skies and a few puffy clouds. We didn't have to stop for lunch, because of the generosity of Amy in Lebanon, who had provided enough food for us to take with us in the van on the trip to Georgia.

Setting up our stage on the town square (Nathan's van with the U-Haul attached.) 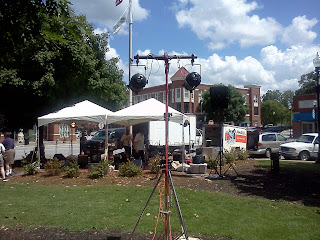 We were charmed by the town. And we're not the only ones. Talking to our sound crew and local host, we soon learned of the many credits Covington has enjoyed being featured in movies and television shows, such as the first two seasons of "Dukes of Hazzard," "Vampire Diaries," and the tv series "In The Heat Of The Night."

Here's a view of the clock tower and Confederate monument on the own square, where the sound mixing tent was set up. 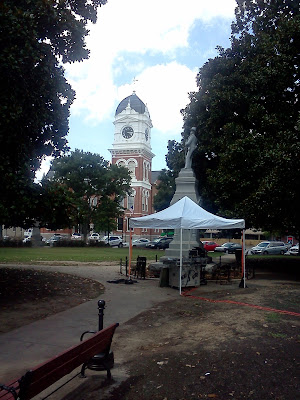 Like many Southern towns, Covington has a statue to honor its Confederate dead. This one was installed in 1906. 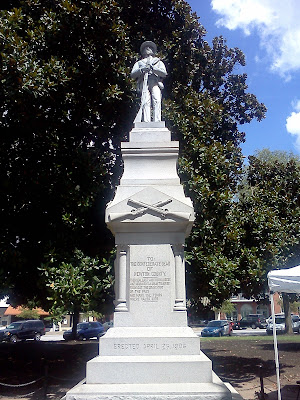 The role that the Civil War played in American history is complex, with ramifications still affecting us today, so it's not easy to make simple statements that accurately summarize what such a statue might mean. It can be difficult to understand how people would view a "cause" with such reverence, but the words they inscribed to express it are carved into the base of the statue, so we can read them and ponder it ourselves. 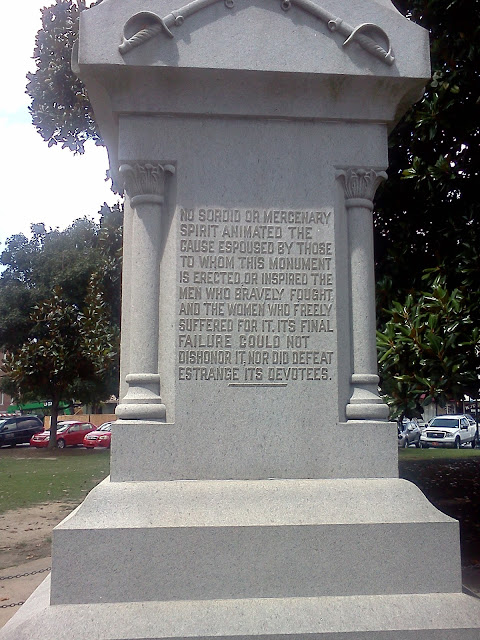 Our sound man, Don, did a great job for us. He introduced himself by announcing his age (64), and his admiration for Beatles music. He even told us about the unique EQ that he heard  in the acoustic guitar sounds on Beatles records, and told us he was using the same setting for us. (It's a boost around 6K, for you audio wonks out there.)

Don was a local guy who had worked with the Allman Brothers in their early days, who were based in Macon, headquarters for Capricorn Records, so he had plenty of stories and was fun to hang out with. He also made us sound great, probably the best first-time sound man we've ever had.

After our sound check, we walked our host Rick to where they had prepared dinner for us. It was supposed to be a "short walk," but after three blocks, Dennis said his concept of "short walk" had already been passed. And along the way, we passed another symbol of Covington's affiliation with Hollywood, as a star with Carroll O'Connor's name had been installed in the sidewalk. 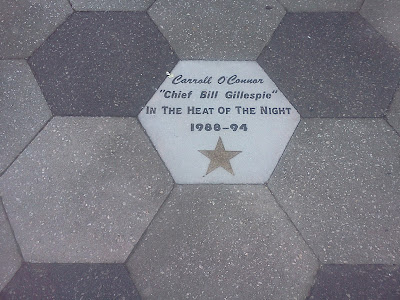 And another two blocks, we found our destination, which was more than worth the walk - a magnificent and beautifully restored antebellum home called Twelve Oaks. 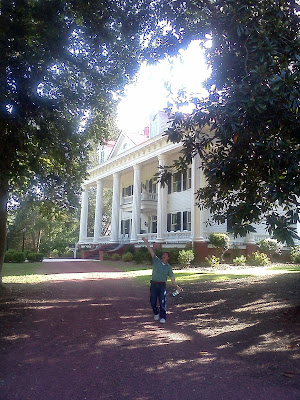 We couldn't resist singing the theme to "Gone With The Wind," and as it turns out, we were right on target.

The house, originally built as a "town home" in 1836 by a local Judge Harris. His plantation home nearby had been occupied nearly a month by General Sherman in 1864 during his march through Georgia, and thoroughly trashed.

A photo of the house had been specified by Margaret Mitchell - in the 1930's, after the novel was published, but before the movie was made - as an ideal home for the character Ashley Wilkes. And the fine folks at MGM Studios painstakingly built a scale model of Twelve Oaks at their lot in Culver City, which is what they used for the movie.

Here's what it looks like when you walk inside: 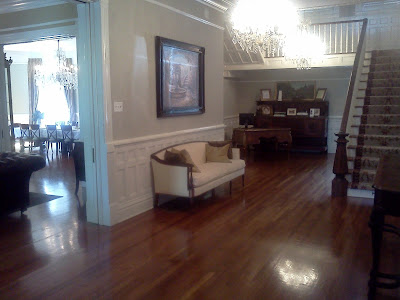 And here's the dining room, where we ate lunch: 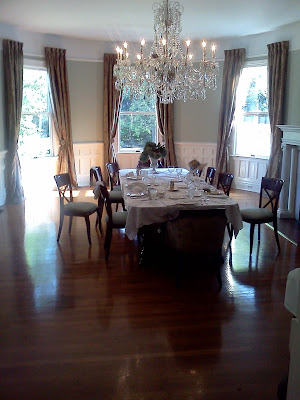 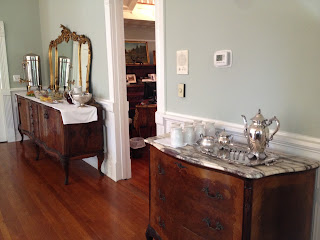 We learned more about the house from Nicole, who had recently bought it and launched the massive restoration process. She has turned it into a beautiful B & B.

The first bedroom we visited was called the "Frankly Scarlet" room (based on Rhett Butler's famous last line of the movie.)

It was a beautiful place, and a great reminder of the grace and elegance that architecture can convey. 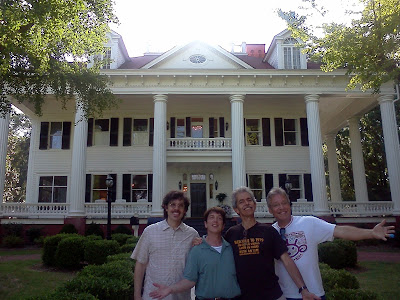 I was ambivalent about our visit to Twelve Oaks, because it was clearly a beautiful place to stay, but I had already accepted an offer from my sister for us to stay at her house in Atlanta that night.

And that turned out to be a wonderful alternative, as she had prepared bagels, cream cheese and lox for our breakfast. And the other WannaBeatles could hear funny stories about my childhood from my sister.

Another wonderful adventure for the family we call The WannaBeatles.