It's an exciting time for the WannaBeatles.

This past weekend included another show at the new Puckett's in Columbia, another sold out night with lots of new fans, along with another delicious meal from their kitchen.  This time it was their special of the night: salmon with crab meat, over asparagus, with creamed sweet potatoes and Belgian cord bread - made on a waffle iron. Three out of four of us ordered that special, and enjoyed it.

Here are a couple of photos to capture the vibe. First, the hand painted sign in the window: 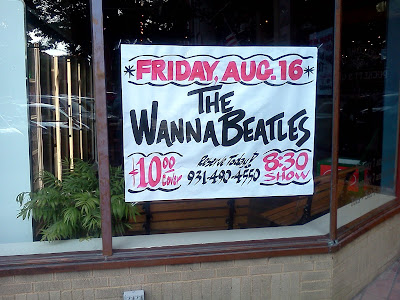 Then, a glimpse at one of the extra rooms - this one called the Polk Room, commemorating the 11th U.S. President ("the least known consequential President" according to Wikipedia), who lived in Columbia. For some reason, the hand painted signs emphasize the Polk family's aversion to alcohol. 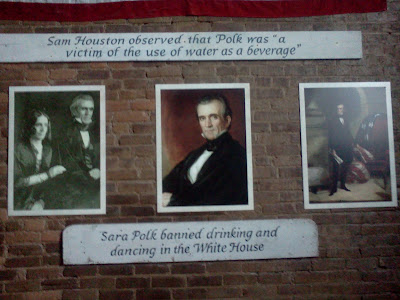 We had a great time in Columbia, especially when an entire table cheered loudly after our version of "I Am The Walrus." After the show, someone from that table told us that there were musicians in the crowd, who were skeptical about anyone attempting such a difficult song, so when we did it, they were impressed. We were glad they appreciated the effort and enjoyed the song.

Next week is our gig in Virginia Beach, at the Sandler Center, with Symphonicity, their local pops orchestra. We've been writing charts, talking with their technicians, and preparing new material for the show.

Half of the WannaBeatles are bringing family members to the show - David's wife Alice, and Nathan's wife Sally are both coming.

Readers of the blog know that we wrote and produced a special song for the occasion, "In '63," which commemorates a year that was important for the Beatles, very eventful for popular culture in this country, and also the year that Virginia Beach was officially founded.

And now, we've see the results of a video that puts together our song with the celebration of the town's 50th anniversary.

It's very enjoyable, as a WannaBeatles video. It shows many images from the song, from JFK to hippies and political protest on through Lassie and Annette.

There's even a brief glimpse of us performing onstage, and a view of a poster advertising the show.

But mostly it's about Virginia Beach.

Here's the link to the video on our youtube channel: http://youtu.be/YOddvao_AOc

Next week, a report on Virginia.

Posted by The Wannabeatles at 3:32 AM