The WannaBeatles went up to Ohio and played a couple of fun gigs. One of them has been planned for almost two years. Bellefountaine, Ohio is the home of the former Miss Lori Jenkins, who is now Mrs. Dennis Scott, which makes her a wife of supreme importance to the group.

Lori's mom and aunt have visited Nashville and become WannaBeatles fans. We were tickled to hear a couple of years ago that Lori's mom got her picture in a local paper wearing a WannaBeatles tee shirt - the first one in Ohio.

So the group has fans up there, and that's why playing there was an event.

The local paper published a front page article to show how excited they were to see us. 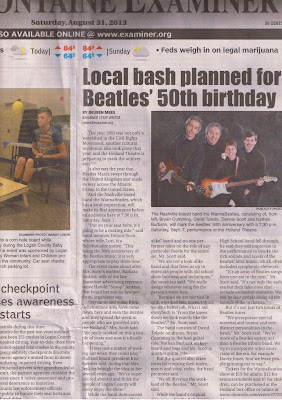 Our gig was at the historic Holland Theater downtown. At this point, we've played a  variety of such places, in many small to medium sized towns, and we always appreciate the way they bring a community together in appreciating an architectural treasure from a distant period, and making it a viable center for creative expression.

But the Holland Theater turned out to be even more special than other restored theaters. It was designed by a Dutch architect and built in 1931. The interior reproduces a typical street from a town in Holland. We're talking about windows, lamps, awnings, brick facades (actually plaster painted to look like bricks) and, on both sides of the auditorium, full scale, operating windmills.

All of this was visible to us on the Friday night before the show, after we arrived in Bellefountaine and did a brief performance (unplugged) on the stage of the theater for various supporters who've been involved in the restoration. The windmills were started up, and the blades began to rotate. The special star lights in the ceiling were displayed, along with the image of clouds, moving slowly across the sky.
It was all very remarkable, and we can understand why people there were excited about their local theater.

Walking around downtown, we got to see some historic items. 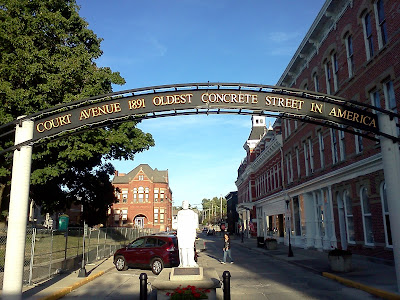 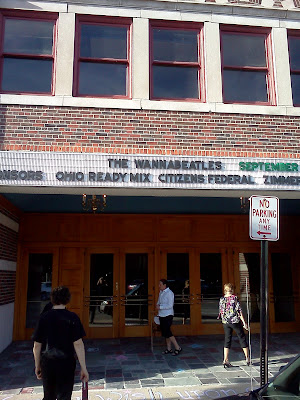 Our name on the marquee

Lori and her mom Barb, and her other aunts, brothers and cousins, were all part of making us feel welcome. We were each presented with goodie bags, containing snacks and Ohio souvenirs. 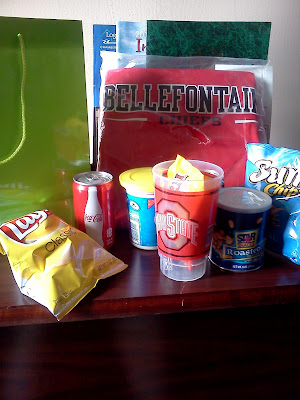 We spent Friday night at Lori's mom's house, meeting the family and enjoying a generous cookout supper. They even made a cake with our picture on it, another first. 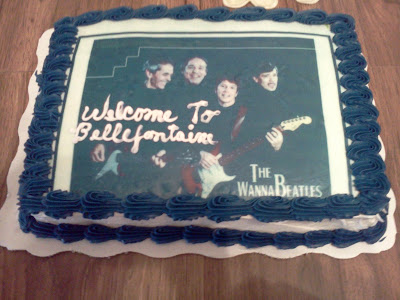 Saturday morning, I took a walk and captured some local flavor in the neighborhood - a combination of Halloween decorations with football fan fever. 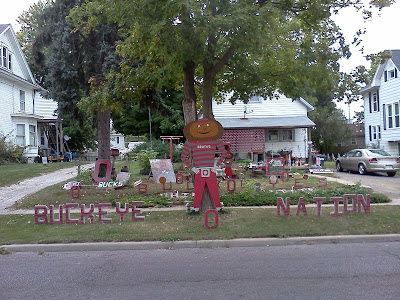 This particular home identifies itself as "Buckeye Nation."

We had a great breakfast at a favorite local restaurant, where we saw some of Lori's cousins again. It turned out that our waitress was also the director of the local dance studio, Dance Fusion Studio, which was involved in our show. We would be rehearsing their two numbers at the theater that afternoon, and performing with them that night.

The show went well. We had an excellent sound man, Quentin, and a huge video screen covering the back of the stage. We could tell that Dennis was a little nervous, playing in front of his wife's enthusiastic home town, but he did well.

He made a comment onstage about his mother in law visiting their Nashville home for six months. LIke a great Jewish comedian, he paused a few seconds, then said "That wouldn't be so bad, but she also brings her sister Patty." He was complaining, but making a classic joke out of it, and the people laughed. He had them in the palm of his hand after that, and we had a great show.

Sunday morning we learned a little more about what makes Bellefountaine special. It's in Logan County, which contains the highest point in Ohio. It's the home of Betty White's first husband. But the greatest claim they make is having the first concrete street in America. 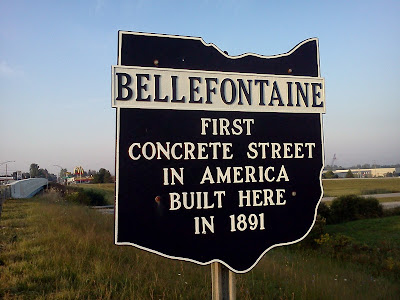 And for you fans of Olympic Snowboarding.... 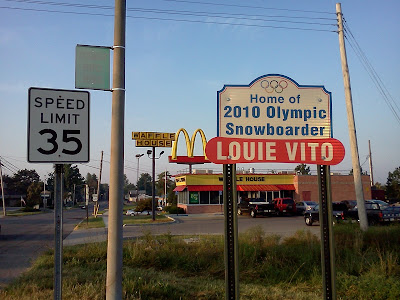 Then we drove to Marietta, in the southeast corner of the state, on the Ohio River. We were booked as the closing act for the annual Sternwheel Festival, which features steamboat races at the riverfront. The bands played on a barge that was attached to the riverbank, much like we had experienced in Nashville at River Front Park. 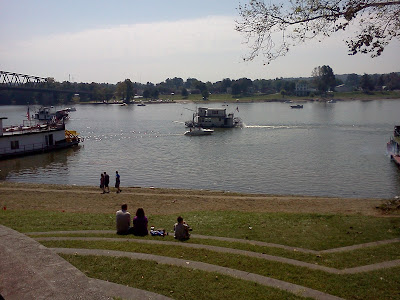 We had a room at the Layette Hotel downtown, and learned about Lafayette's visit there in 1825. 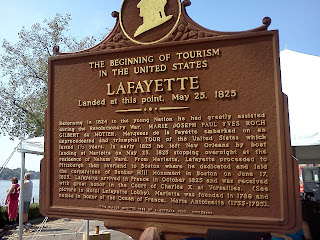 A monument at the river front showed that the town was founded in 1787, the first permanent settlement in what was then known as the Northwest Territory. 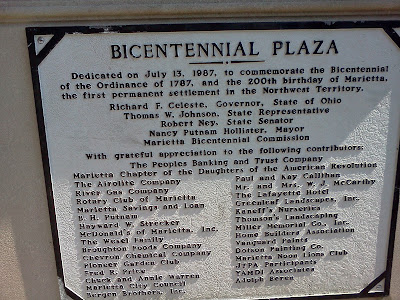 It was a hot afternoon, but another fun show. We had a great sound company, and there were boats along the river behind us, with people enjoying the music along with the crowd assembled on the river bank. We had loud speakers facing out to the river so the people on their boats could hear the music.

Marietta Ohio is right across the river from West Virginia. Since our gig ended at 4 pm, we figured we could make it back to Nashville that night. We packed up, with plenty of help from a stage crew that loaded our stuff into a pickup truck at the end of a ramp connected to the barge, which took it up the river bank to the van which was parked in the street in front of the Lafayette Hotel.

We crossed the river into West Virginia, and came home that way, arriving by midnight.

Posted by The Wannabeatles at 8:31 AM