You may not have heard of Chip Douche (doo-SHAY) but we think you'll enjoy getting to know him.

He exists on video, an imaginary character who helps promote the Edgehill Cafe. Here's the clip that introduces him:

In the second installment, we get to know him a little better, as he refers to himself as the "Chipster."

Chip is the brainchild of a creative advertising entrepreneur and Belmont music biz professor named Mike Cortese. He and his partner Ryan Bitzer have launched an innovative marketing campaign producing funny videos as a way to attract viewers. Edgehill Cafe is their first client.

Mike's extensive background in improvisational comedy was the perfect match for the situation. Watching Chip is like watching a sketch on Saturday Night Live or SCTV.

In another recent video, he plays an obnoxious talk show journalist, with a fake tan, interviewing author Ruta Sepetys, winner of a recent Quill Award. Ruta Sepetys is a real author, who played along with the spoof, while still talking intelligently about her book and thanking her publisher.

So what could this possibly have to do with The WannaBeatles? You might well arsk.

The third Edgehill spot is a sketch where different coffee drinks are ordered. One of them is called the Abbey Road. Mike and Ryan thought having a locally known Beatles band would work in that scene.

It was about a month ago when we heard from them about the possibility of our appearing in the video, as the customers who order the "Abbey Road." After watching the Chip Douche videos, we were drawn in, and thought that sounded like fun.

It took some juggling to find a day when we were all available to do it, but Mike and his videographer and all four of us were available last Sunday, Sept. 22, at 1 pm. We got into uniform and brought our guitars, bass and drum sticks to the Edgehill.

The script has the barista call out the order, "Four Abbey Roads!" then he looks in our direction, with a vague sense of recognition, saying "hey, isn't that…" The next shot is us, in uniform, holding our guitars, bass and drum sticks, saying "Hello, we're The WannaBeatles," then coming up to the bar to get our drinks.

We were there to do our scene - that one line. No one else was there. Not the barista who offers us the drinks. In fact, there were no "Abbey Road" drinks in the room. They weren't even on the menu. Hard to believe, I know.

The rest of the video has already been shot. Like a film, this video was being assembled in pieces, a few seconds of screen time taking many minutes of shooting time, and most scenes shot days apart.

It's the editing that makes it all seem like one seamless event to the viewer.

Mike gave us our cue, and held a small recorder to capture the sound, while Thomas Newton, his videographer, captured the shot. We sat on four adjacent stools and said our line, and walked toward the camera, supposedly to pick up our coffee drinks. We tried several times to get it just right. 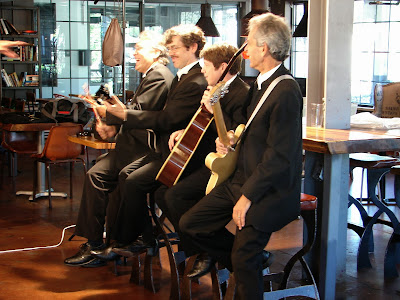 Under the lights, trying to remember our line 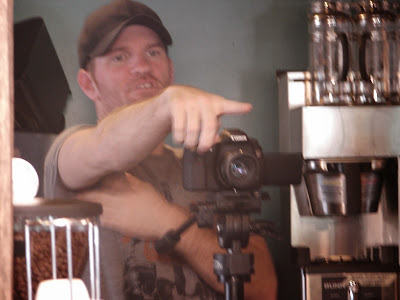 Thomas giving us our direction (over the coffee beans)

After they got a take we all liked, we gave them a special rendition of "Yeah, yeah, yeah" in harmony, which they may insert among the outtakes at the end -- we'll see.

We were glad to hang out with Mike and Thomas after the scene.

Me, Mike and Nathan after shooting our scene
With Thomas and Mike

That particular Sunday, both Dennis and I were leaving town - him for Florida to visit his parents, me with the Good Yoko to a state park for a one night escape. Dennis had to leave for the airport right after our video shoot, and he didn't want to take his WannaBeatles outfit to Florida, so we took it with us.

Good Yoko thought it was be funny to take some photos of Dennis's suit on vacation with us. 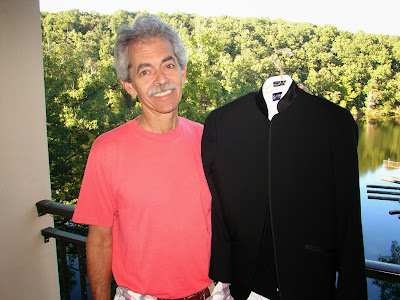 Dennis's suit on the balcony, with a view of the lake. 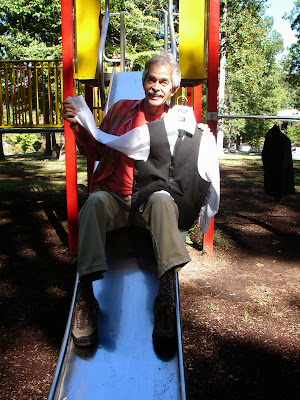 Dennis's suit at the playground, trying out the slide.

We hope his suit enjoyed the vacation. Dennis certainly deserves it.

Thanks to Good Yoko for all the photos. Thanks to Mike, Ryan and Thomas for adding us to their video. We look forward to seeing it. And trying our first real "Abbey Road" at Edgehill Cafe.

Posted by The Wannabeatles at 10:57 PM