Home of University of Virginia, famous for its curving brick walls designed by Thomas Jefferson, Charlottesville awaited our arrival at the Jefferson Theater.

This was the middle date of our three day tour, deliberately booked for its geographical position between Jonesborough TN and Virginia Beach. Both those gigs had a guarantee, and both were outdoors, playing for a friendly crowd likely to show up because they didn't have to pay admission.

The geographical advantage of Charlottesville for Day 2 led us to take it in spite of other challenges that were worth the effort.

For one thing, there was no guarantee. We faced the risk of losing money after paying the expenses of getting there. The best deal available was to play for a percentage of "the door," meaning our income depended on how many paying customers we could draw in a city where we'd never played before.

One idea that had worked for us before was to reach out to local dance schools and choirs, to invite them to participate in the show. We like it as a way to involve the local community in what we do.

Dennis discovered and invited The Virginia Consort Prelude Choir and The Wilson School of Dance. Both local groups agreed to work with us on the show.

It was simple enough to send Beatles songs to the dance company for them to work out choreography for "I Saw Her Standing There" and "Here Comes the Sun."

The choir also selected two songs to work on:  "Eleanor Rigby" and "Obla-Di, Obla-Da." They discovered they sounded better singing "Eleanor Rigby" in a lower key than the original version. Since we would accompany them in the new key, we rehearsed ahead of time to be ready.

Dennis deserves all the credit for setting this up and coordinating with the Jefferson Theater to make it work. We truly have a Brian Epstein operating within the ranks of the WannaBeatles.

And so, we arrived at the Jefferson Theater that Saturday afternoon. We met Warren, our contact and stage manager, who helped us load in our gear at the back of the theater. 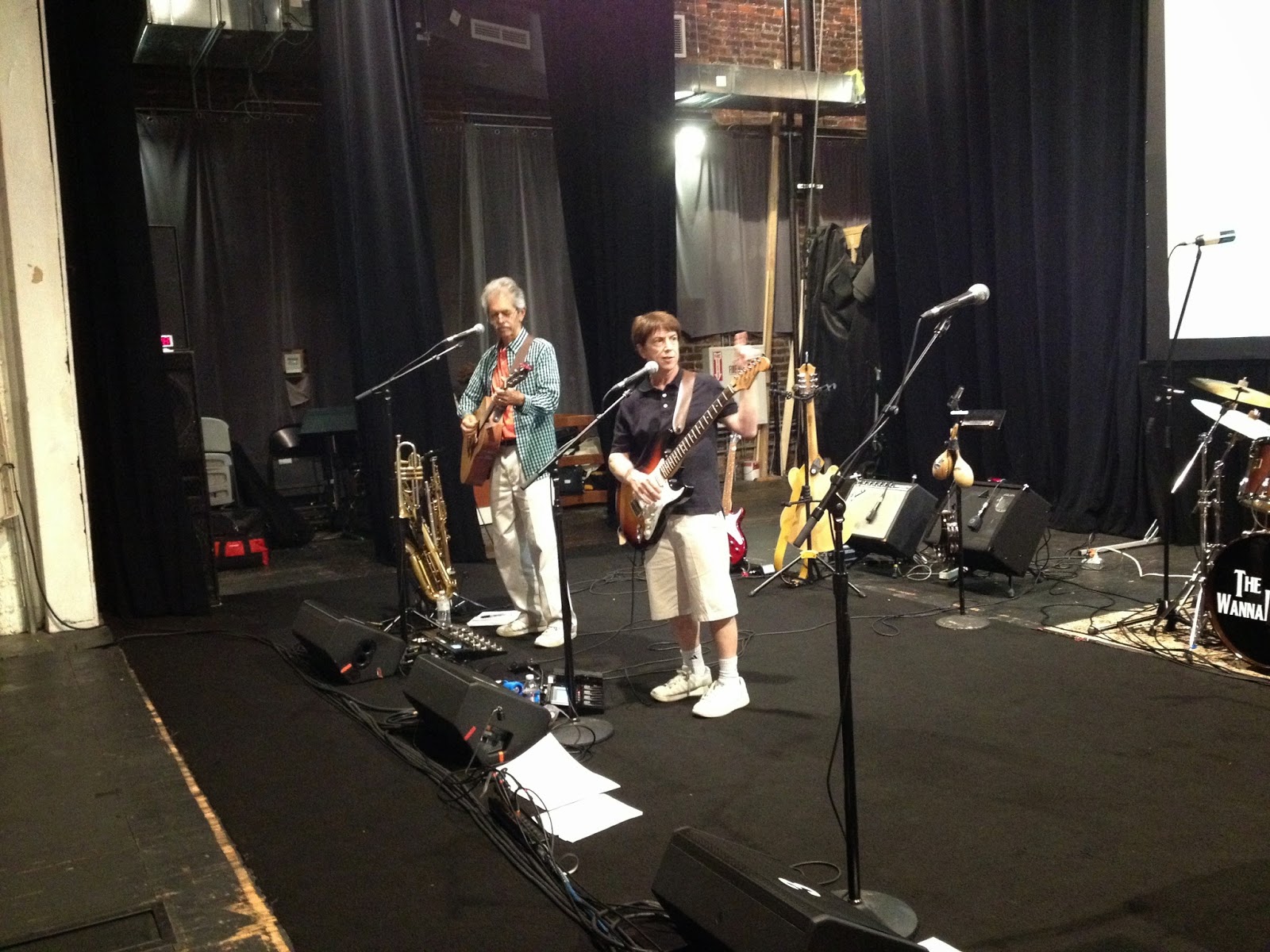 BC & Dennis at sound check
(Nathan graciously taking the phone
so I could be in the picture)
David Dennis & Nathan
Dennis and Nathan, with Warren
back on monitor mixing board 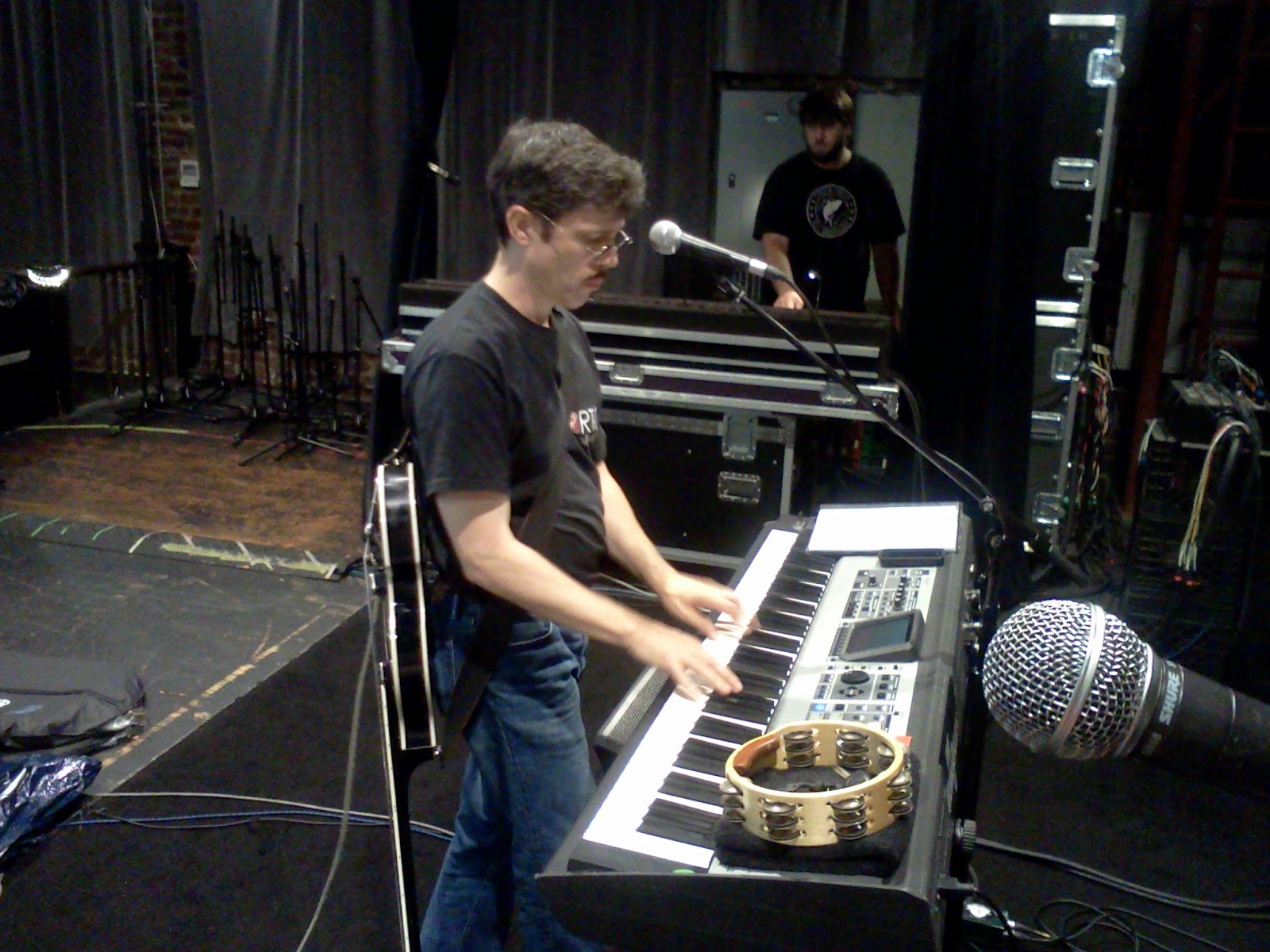 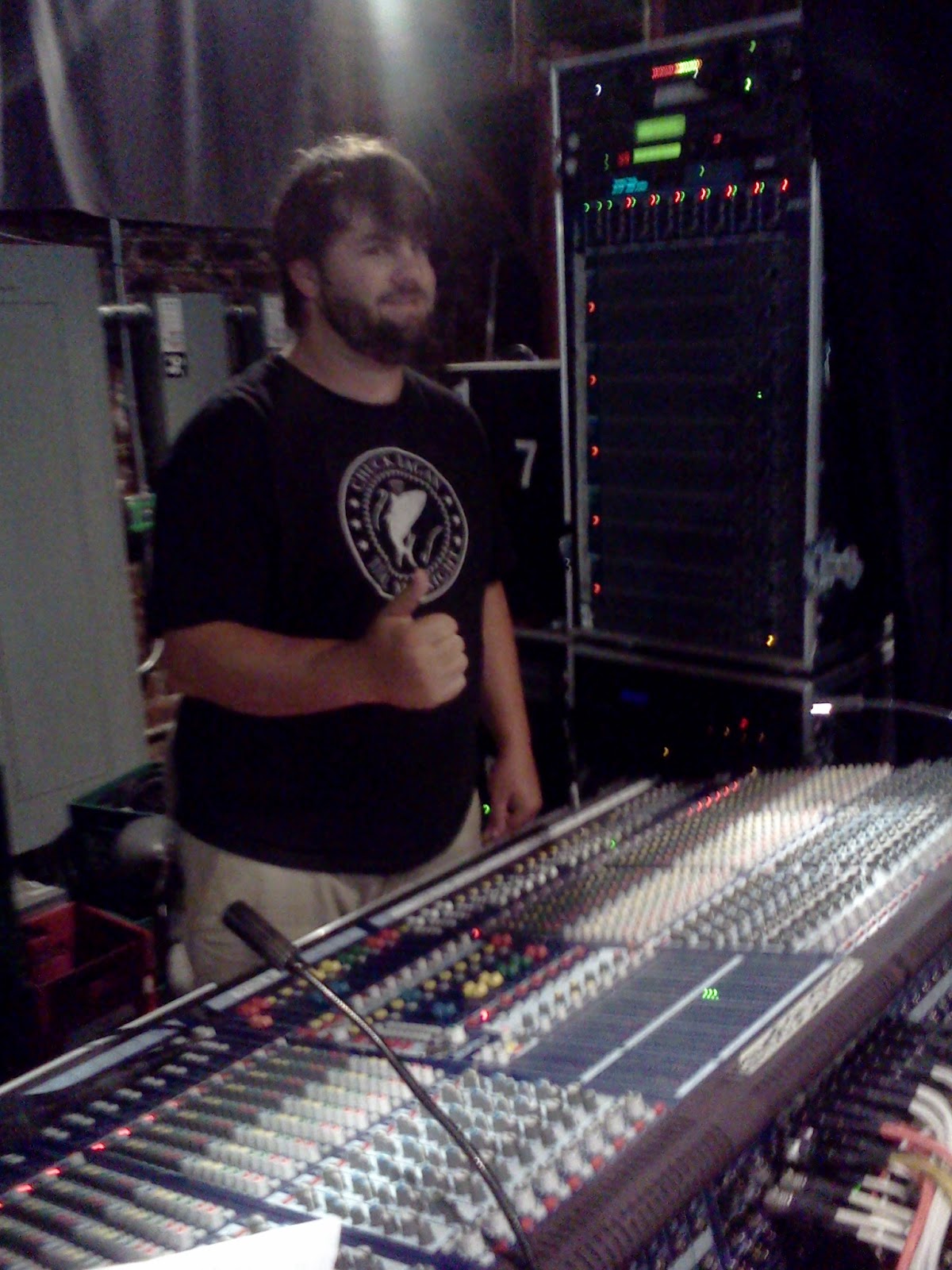 Warren at the board 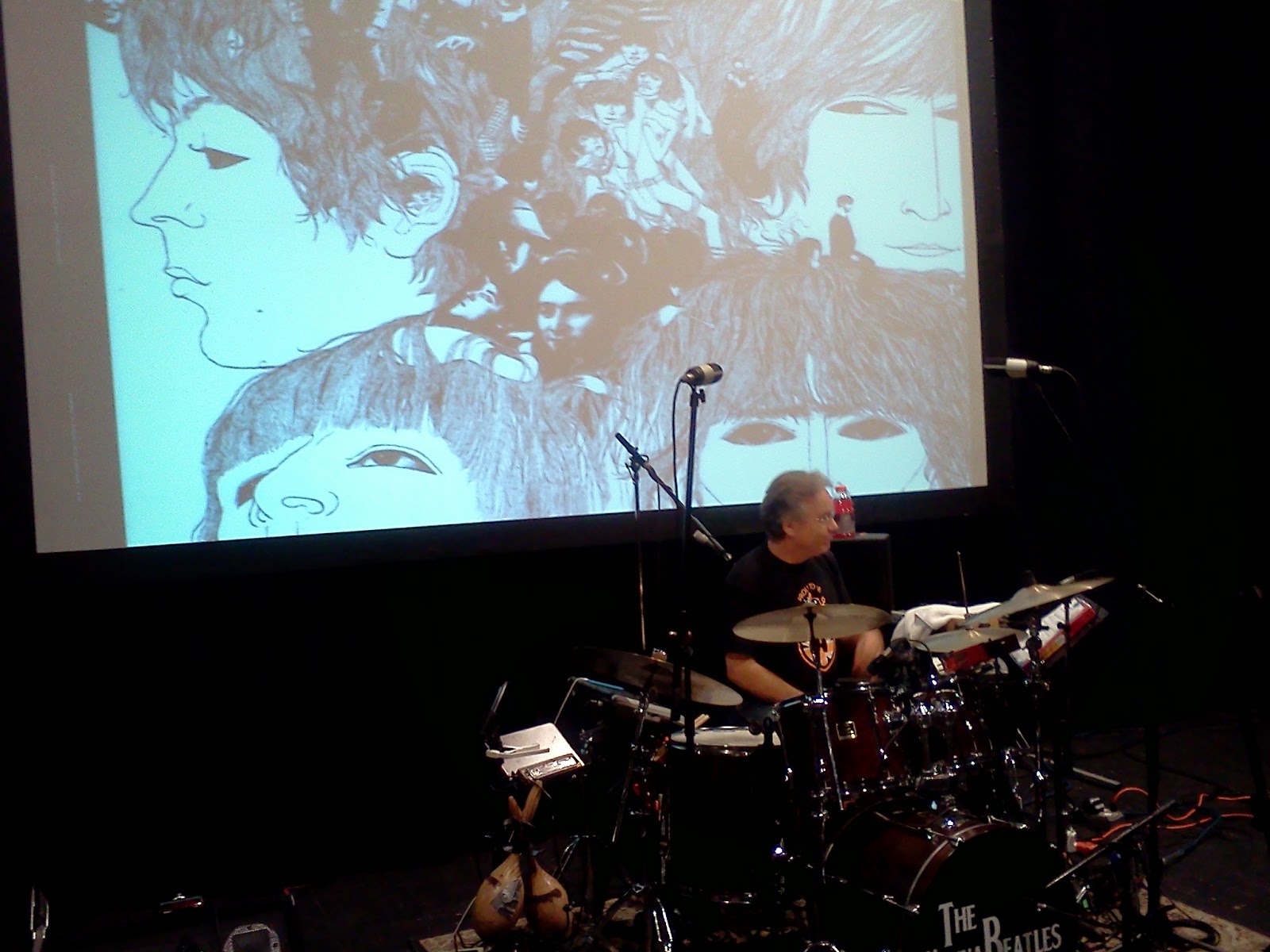 David & the "Revolver" slide on the backdrop.

Another complication for this show was the video. Again, Dennis is the mastermind, having developed a series of videos for every song in our set, and a way to coordinate his laptop program with theater equipment whenever a screen is available to us, as a way of enhancing the show.

On this particular weekend, the other two dates were outdoors, so a video screen wasn't available. But the Jefferson Theater has a screen, so we added the laptop setup.

But the real special addition to our Charlottesville show, and the energy of the afternoon soundcheck, was our collection of guest performers - The Wilson School of Dance and The Virginia Consort Prelude Choir. 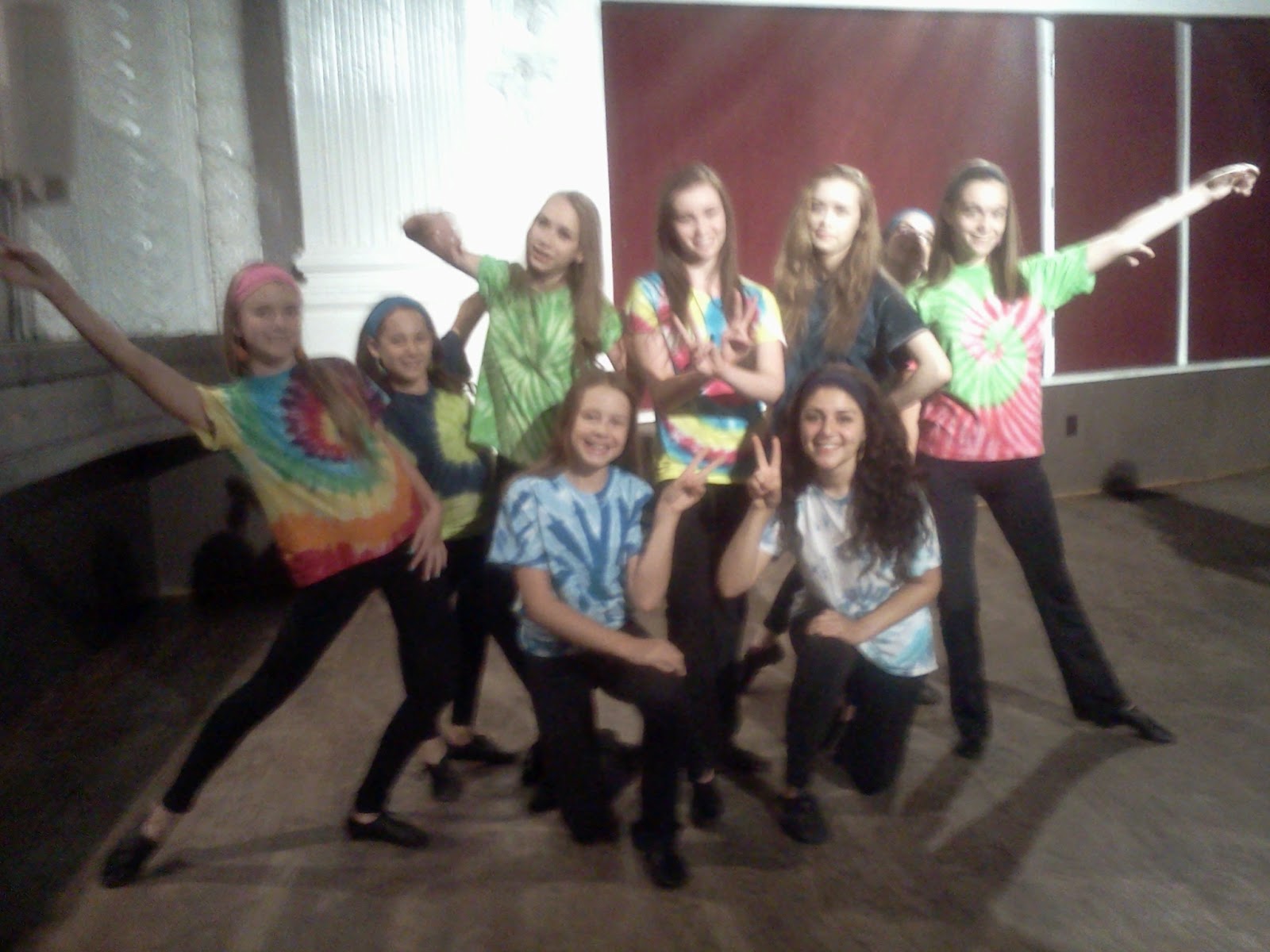 Our dancers arrive at sound check, ready to go 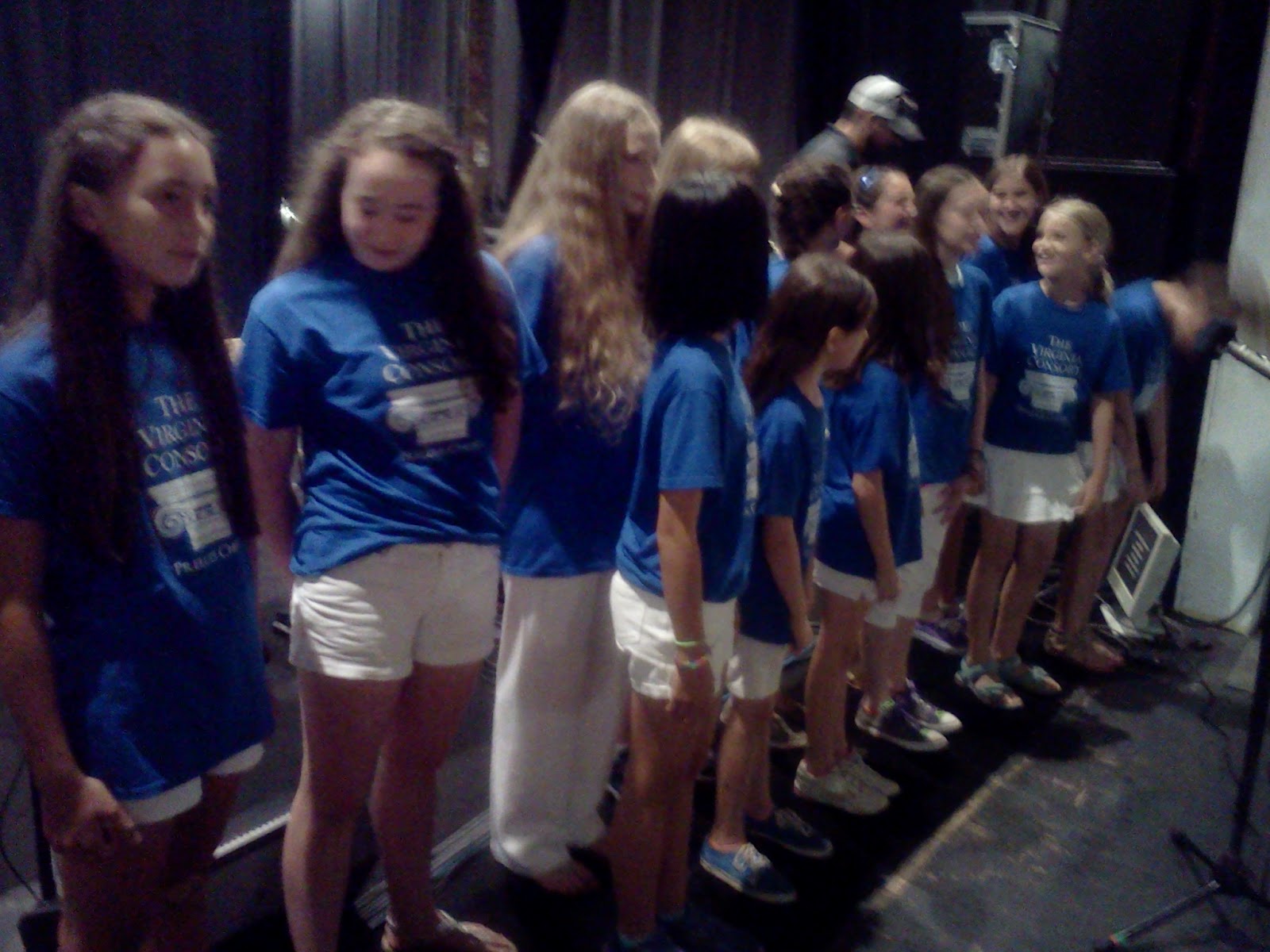 And the Virginia Consort Prelude Choir 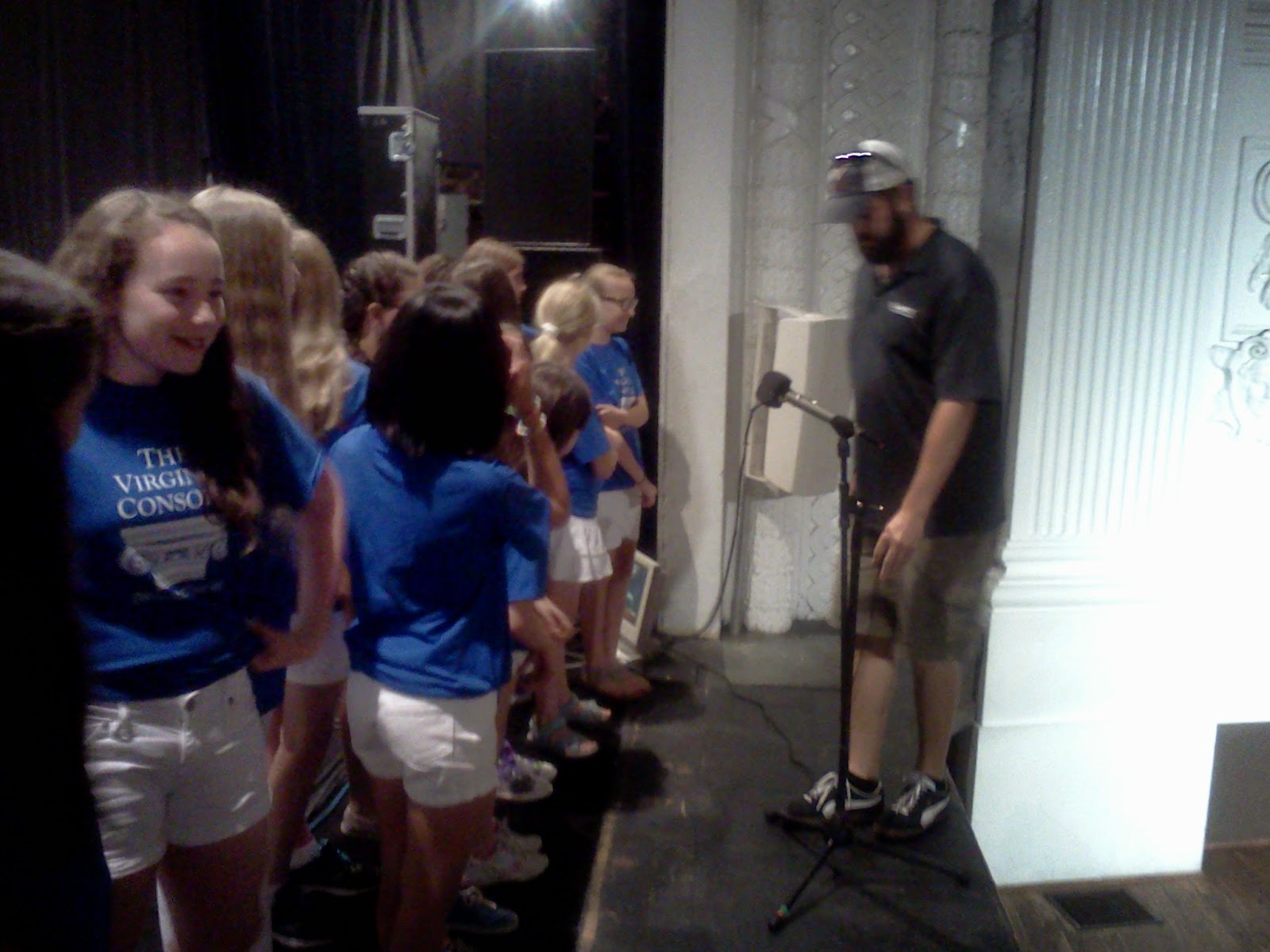 Setting up a mic for the choir 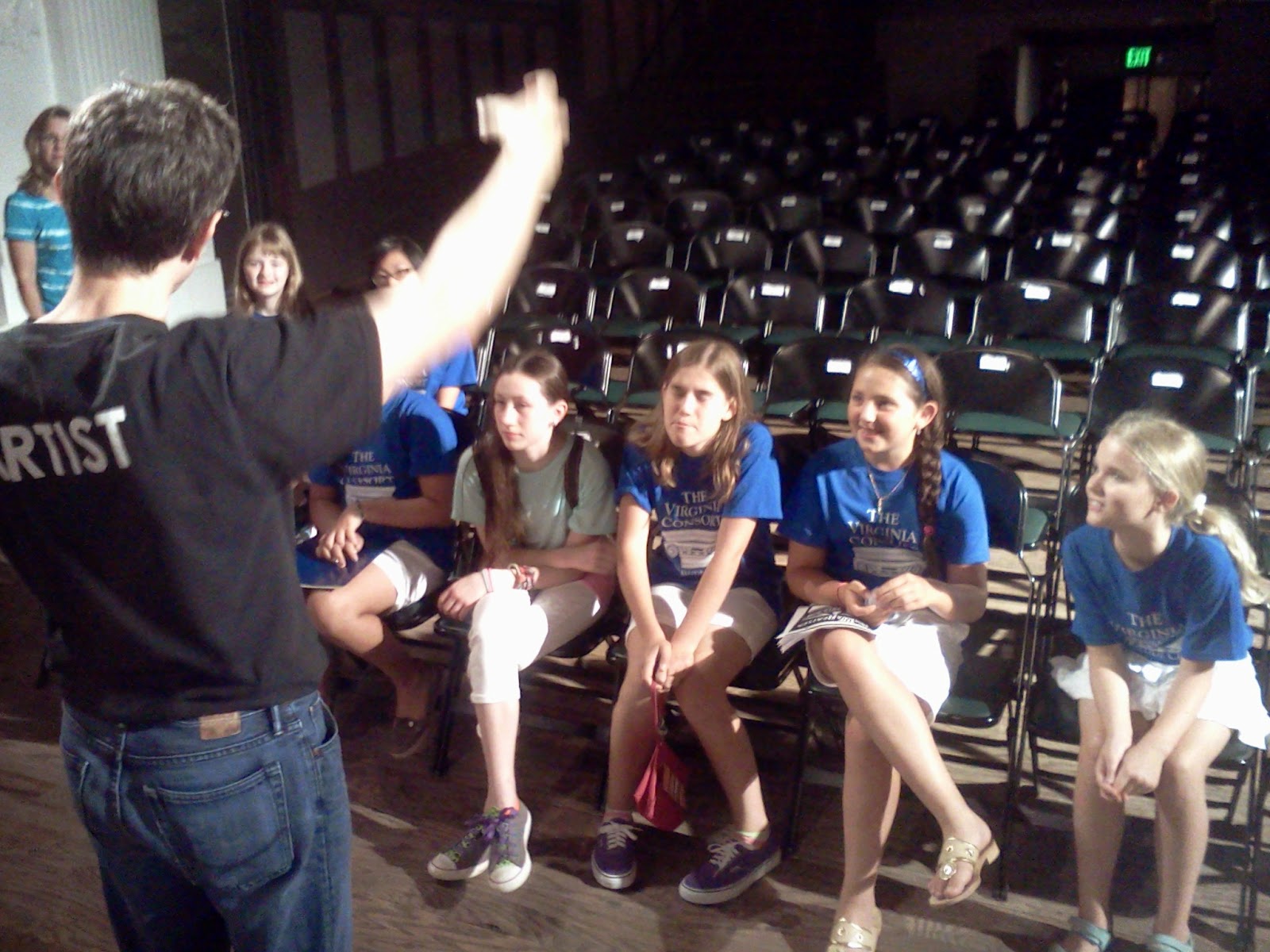 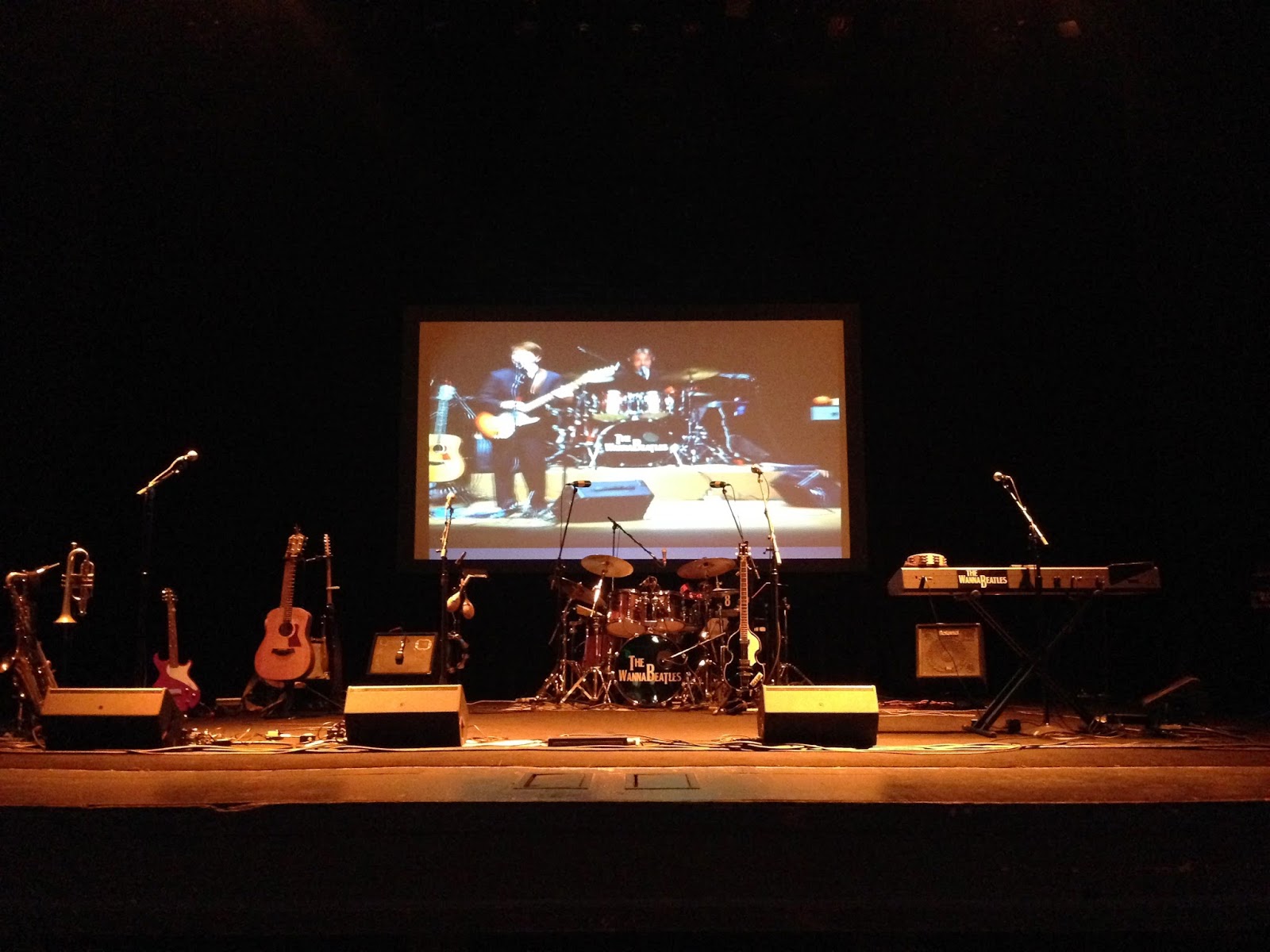 How the stage looked before the show

After soundcheck, I walked around "the mall" in front of the theater, noticing that the street had been cut off from car traffic, paved with bricks, and converted to a pedestrian-only walkway. There are numerous restaurants, stores and street performers, creating a casual community atmosphere in the middle of downtown Charlottesville. 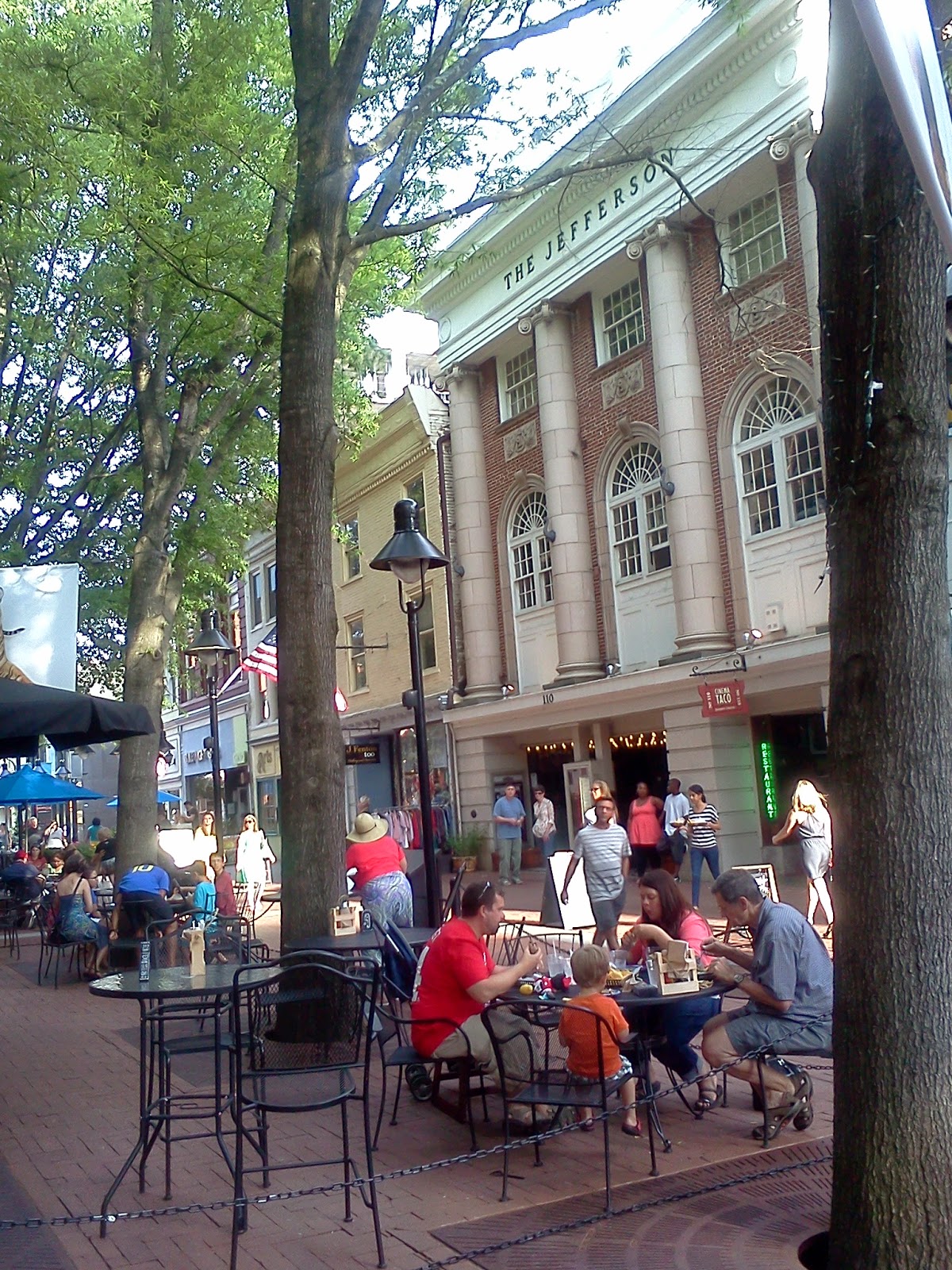 Jefferson Theater out on "the mall" among the cafes.
The name is visible at top of building 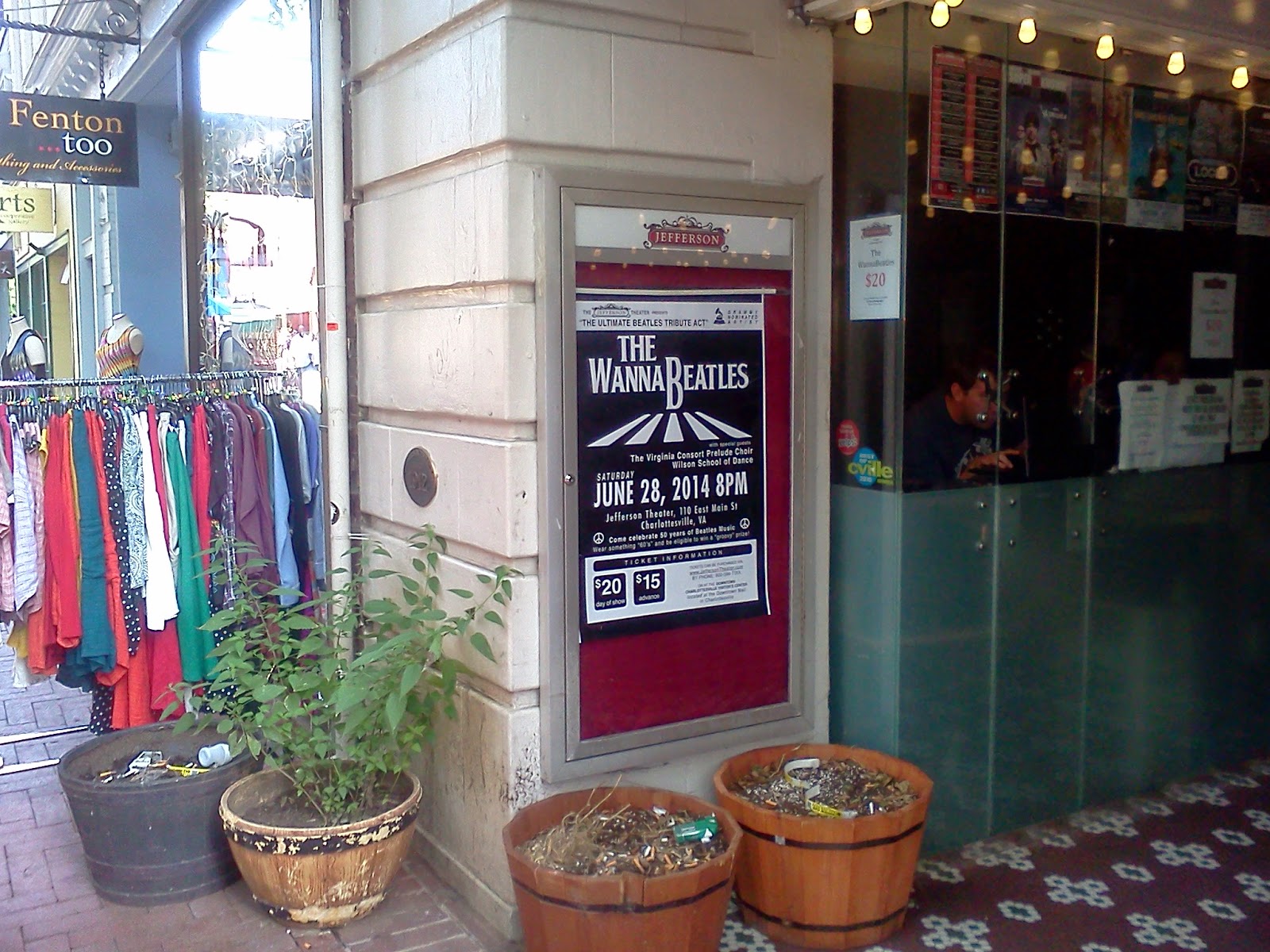 The poster announcing our show at the theater entrance 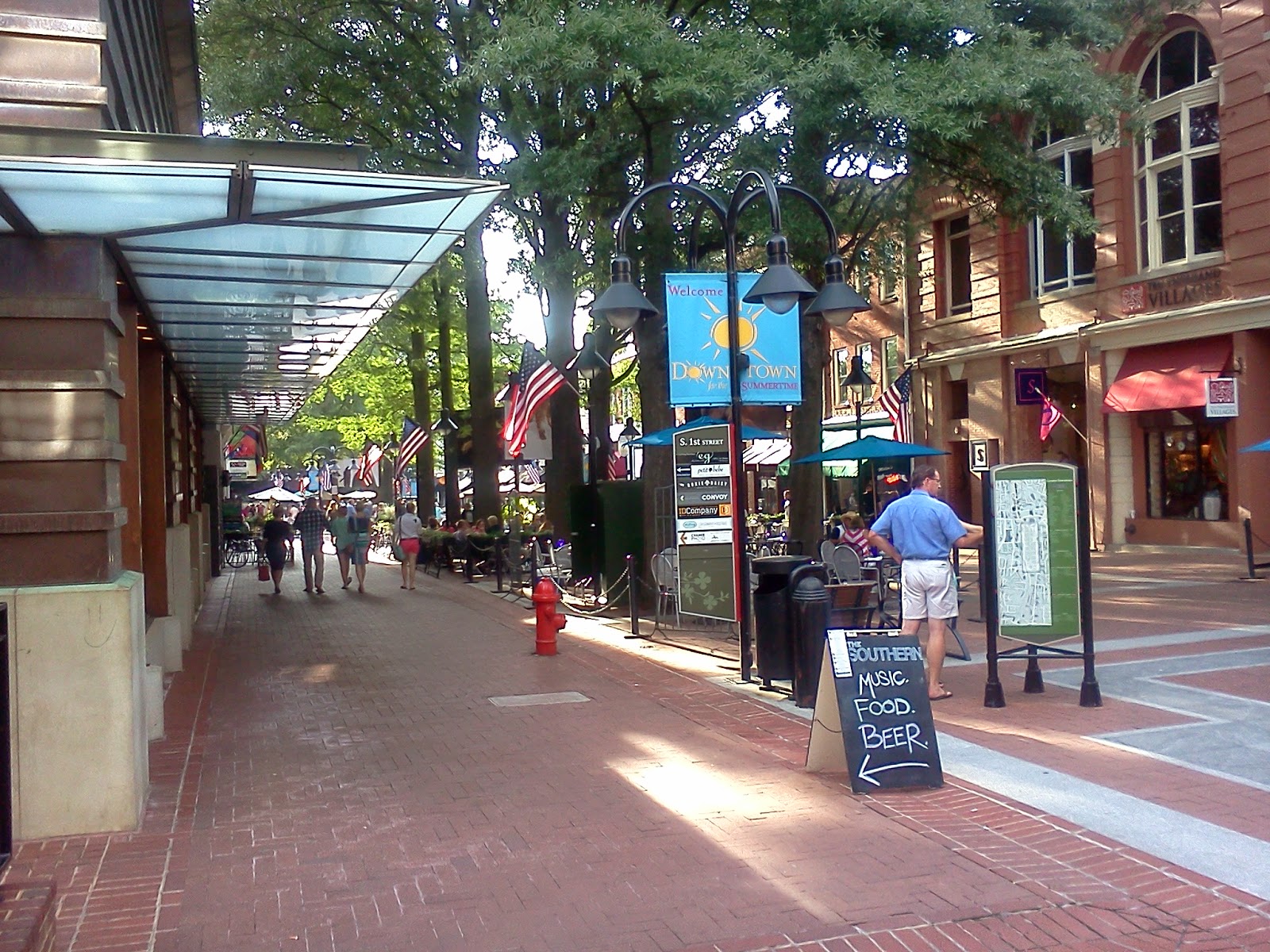 Another view of "the mall"

We were introduced onstage by Jay Lopez from local oldies station WZGN, who welcomed us to our first appearance in Charlottesville. And then we played, and had a fun show. 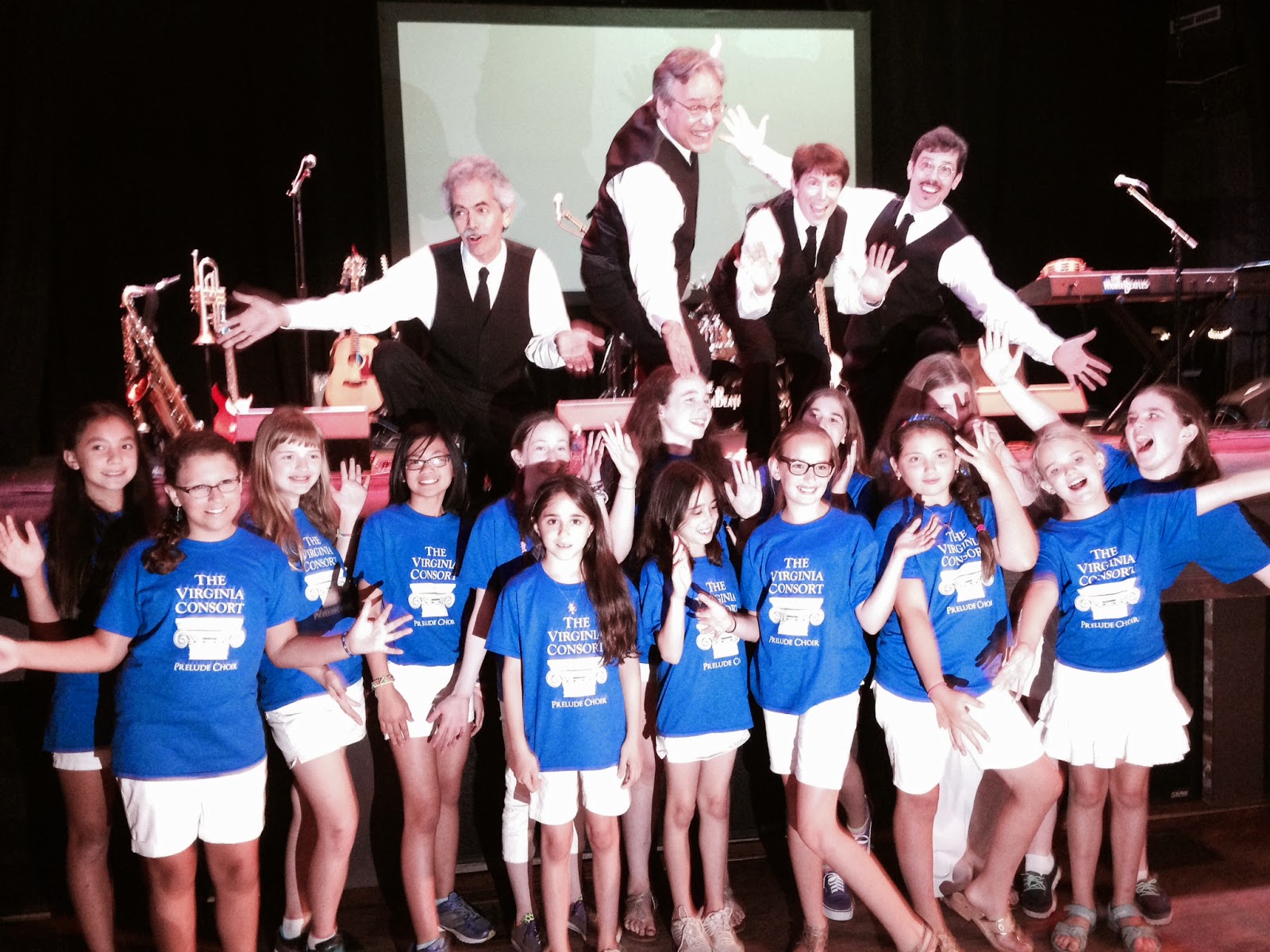 Members of Virginia Consort & WannaBeatles after the show

We enjoyed meeting both Donna, who led and prepared the choir, and Juanita, who led the dance group and created their choreography. These two ladies contributed to the evening and the lives of those girls who participate. We are grateful to them and their energy and creativity.

We had well over 200 people attending the show, which meant we could do better than break even.

Thanks to Warren, Donna, Juanita, Jay Lopez, Doug, and everyone else who helped make Charlottesville such a successful evening.

We look forward to coming back.

Posted by The Wannabeatles at 4:30 AM