October 16, 2014 was the day Paul McCartney came to Nashville to play at Bridgestone Arena.

WannaBeatle Dennis, who seems to have an abundance of good ideas, thought that Paul's concert would be a great opportunity for us to welcome him back to town with a concert of our own at Rippy's, at the corner of Broadway and 5th Avenue.

It would be a "Welcome Back, Paul" party. A portion of the proceeds would benefit the W.O. Smith School. There would be a psychedelic Love Bus arriving on 5th Avenue, containing dancers who would pour out of the bus onto the street in front of the Arena for a spontaneous flash mob dance, while the sounds of "Twist and Shout" reverberated from the rooftop of Rippy's. We would be introduced by a local television personality, even show up on the evening news. Yes, all this and more...but first, let's go back...

It was a return engagement for us. Back in 2009, we had played the rooftop of Rippy's to celebrate the 40th anniversary of the Beatles' final public performance as a group, which occurred January 30, 1969 on top of the Apple Records building in London.

Our rooftop show in Nashville was not nearly so cold (mid 40's.) We were written up in the Tennesean, covered on local tv, and taped by a team of videographers from Watkins Institute.

Here's a copy of the article about the show from nearly six years ago: 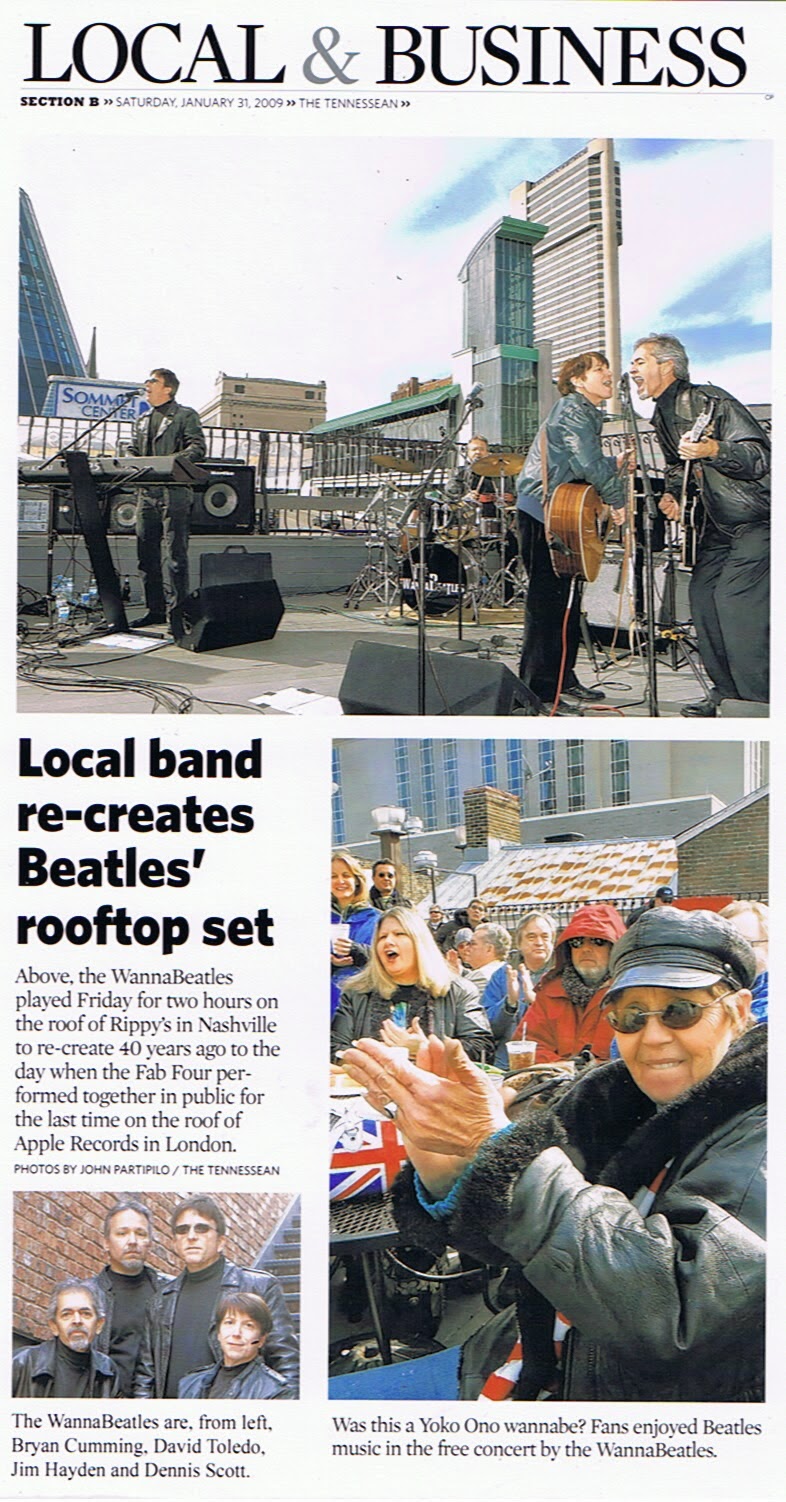 Many things have changed since then. The Sommet Center has been renamed Bridgestone Arena. Rippy's has installed a tent cover, tables, heaters, and a stage, and now offers music every day on their rooftop. WannaBeatle Jim has left, and WannaBeatle Nathan has joined. 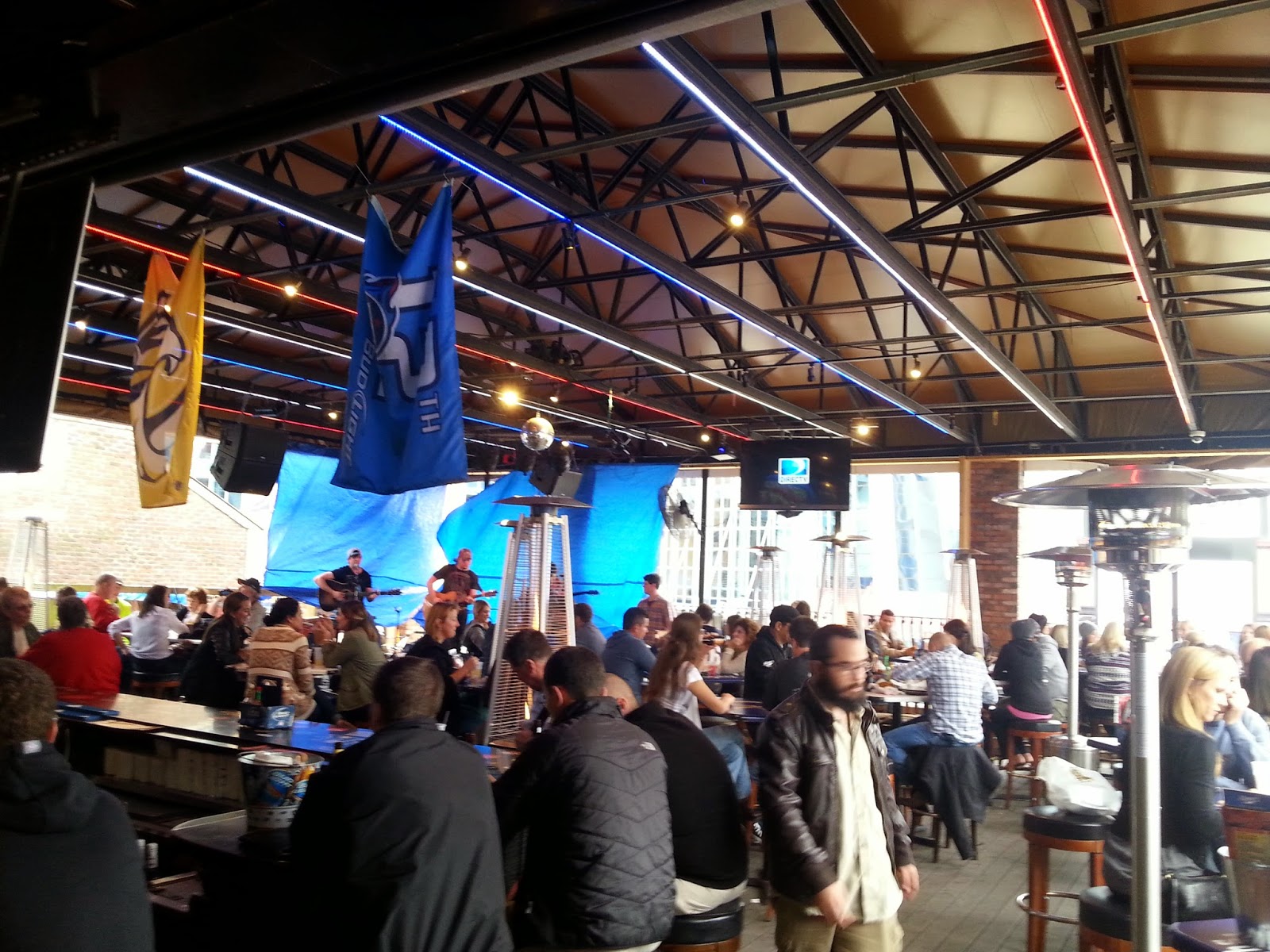 Looking toward stage through sports banners
suspended from beams 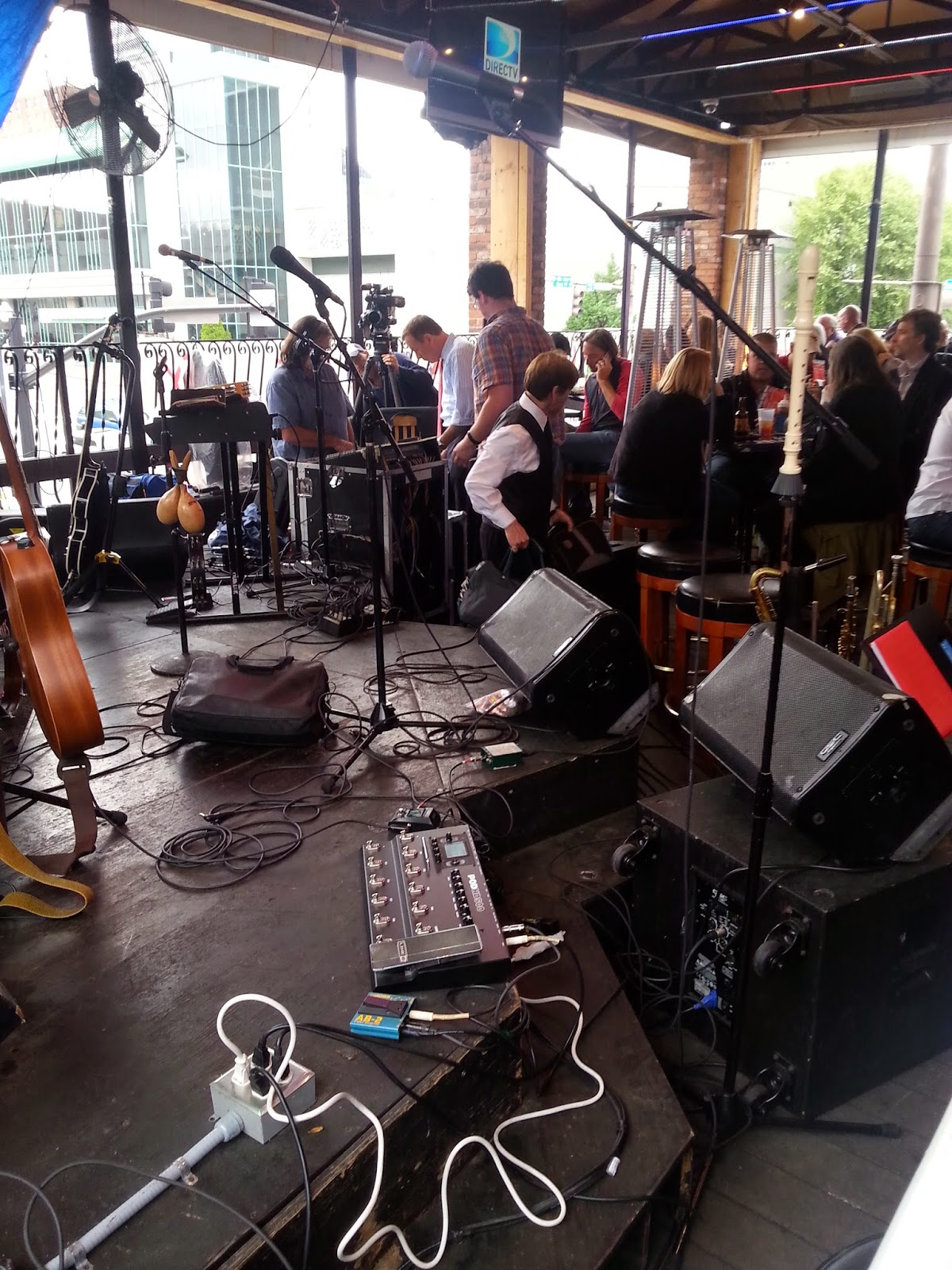 Setting up on our small stage 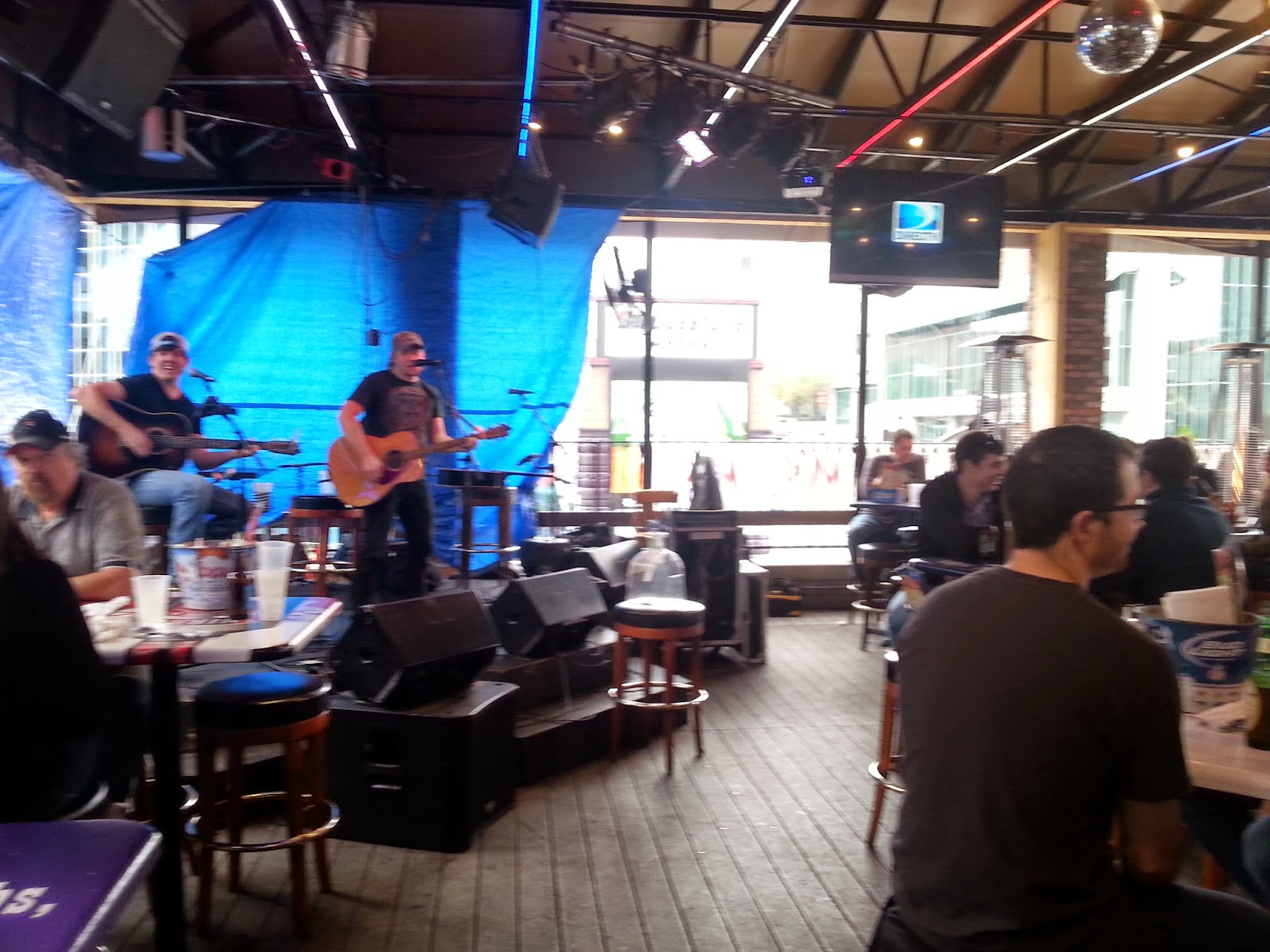 Another view of the stage on Rippy's rooftop 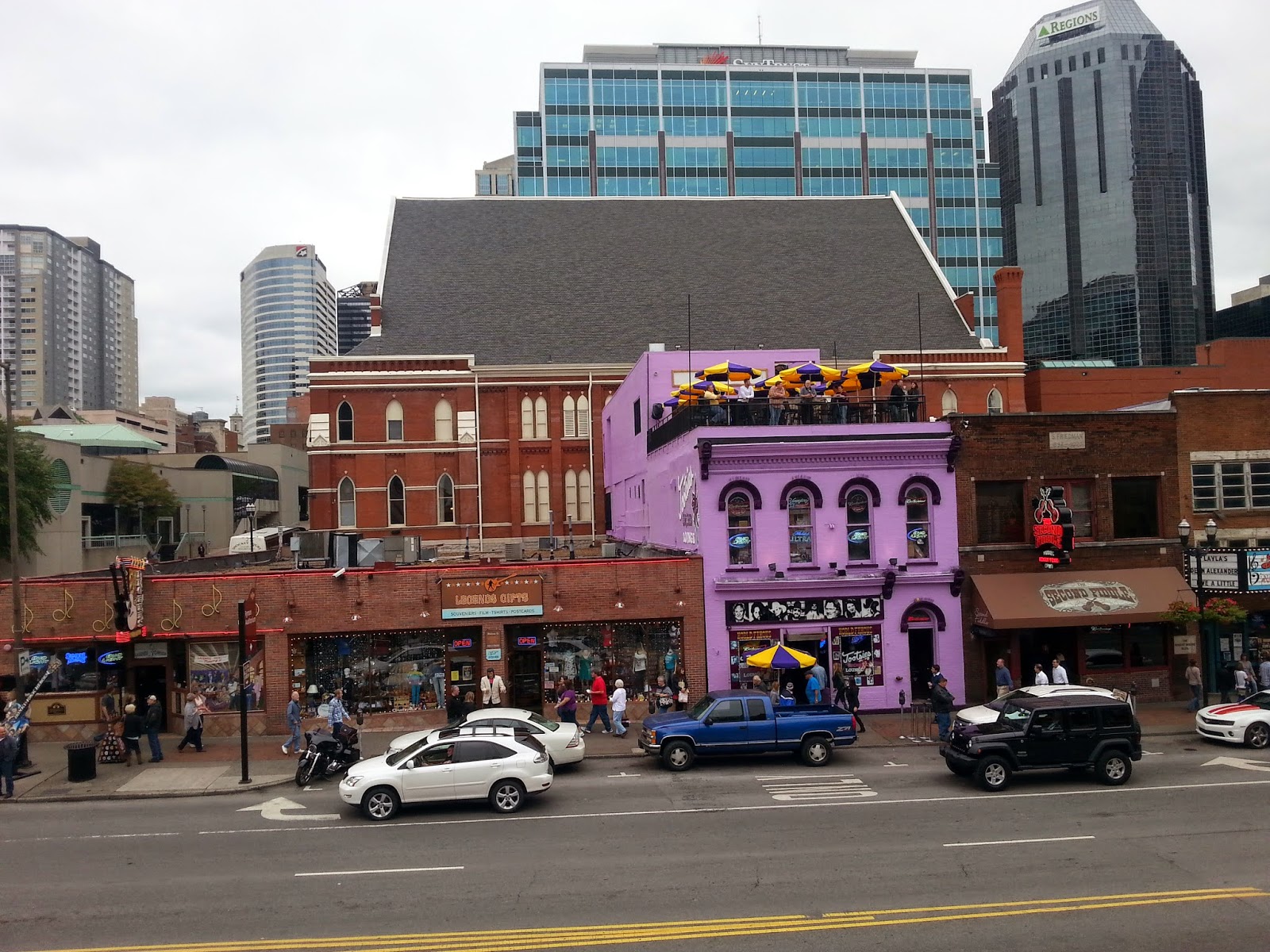 The view across Broadway, looking north,
toward Tootsie's and The Ryman 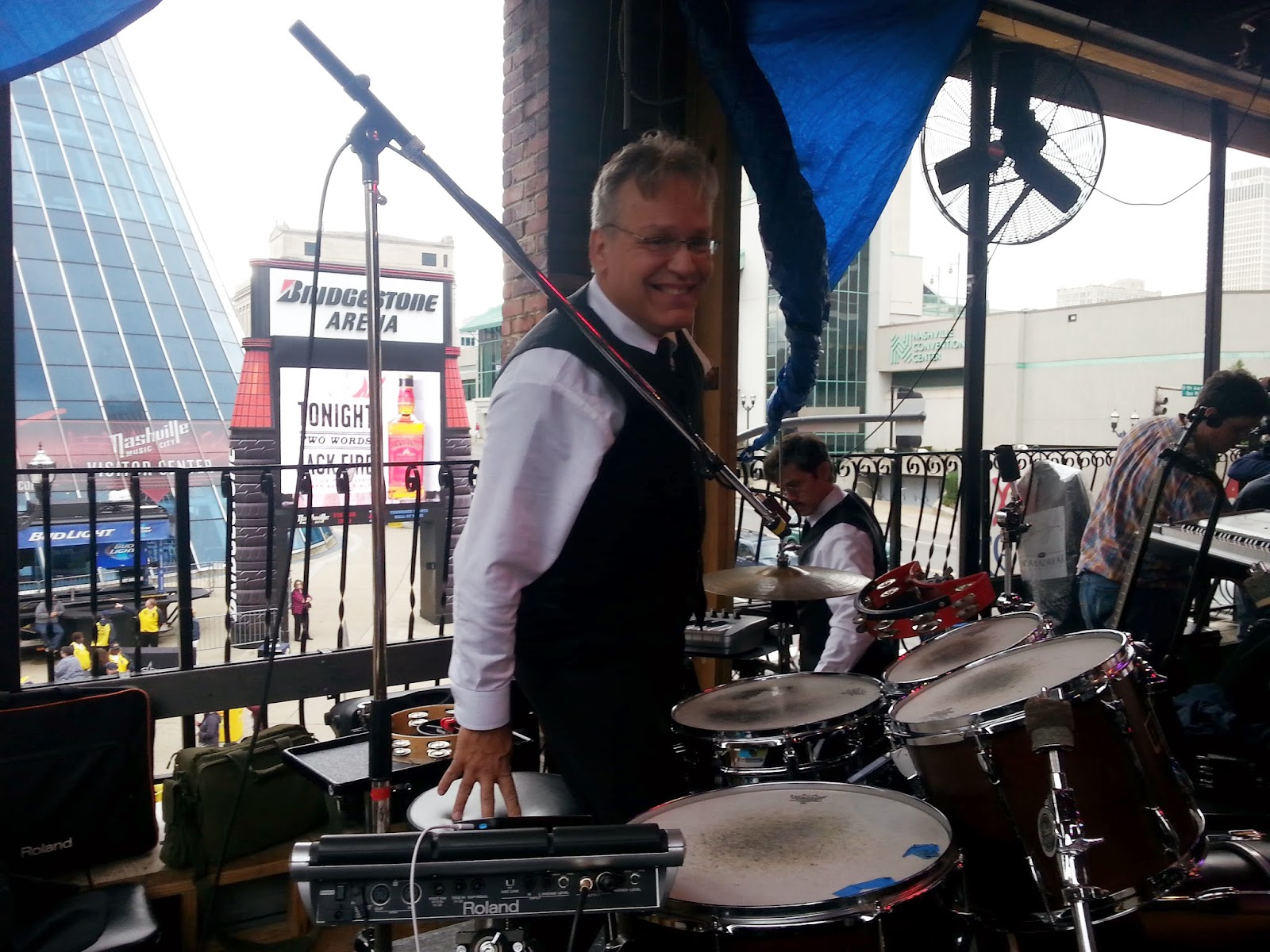 Here's David setting up his drums, with a view of Bridgestone

Dennis's planning involved contacting dancers at Belmont who would not only work up a dance routine, but also arrive together on board the "Big Love Bus," which we had first encountered at a previous gig (see "TPAC and Cool Springs Pt. 2, Nov. 11)

Here's the photo of us with the Big Love Bus, at our gig September 18. 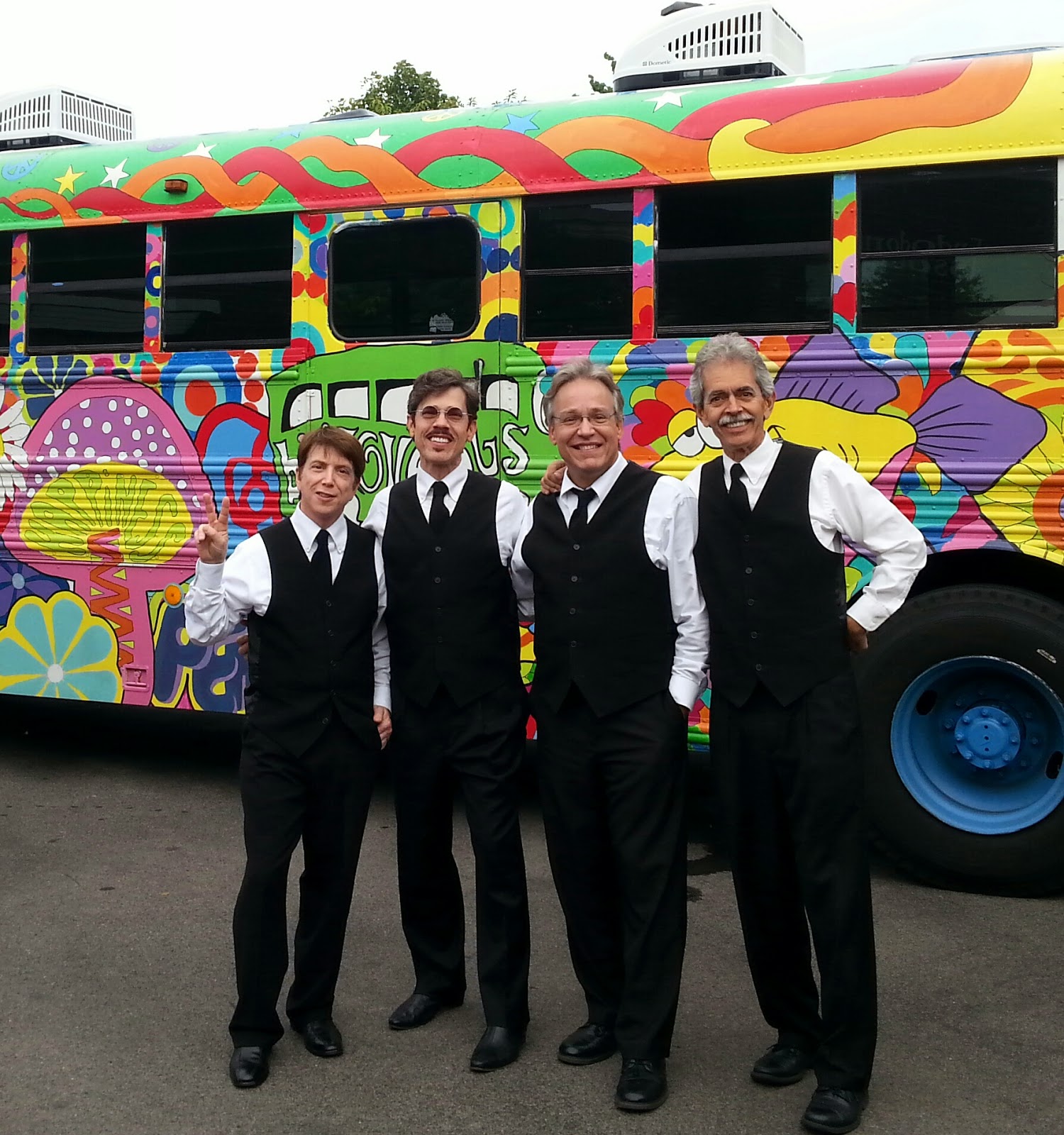 And now, here's what the dancers looked like on Oct. 16,
riding inside the Big Love Bus. 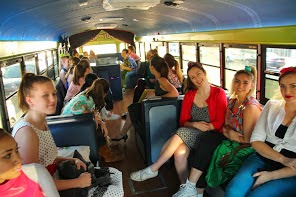 And here they are, as Big Love Bus parked on 5th Avenue, disembarking at the Arena 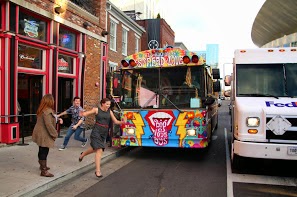 But, wait, you may be wondering.... how did the Big Love Bus find a parking place on Fifth Avenue downtown at rush hour?

That's where WannaBeatle Dennis shows his skills as an event coordinator. He cleared all the necessary bureaucratic channels to secure us a guaranteed parking space at the time we needed it.

He even secured professional traffic cones for us to use. This became Bloggin' Bryan's opportunity to learn about a company called Blinker Lite, which provides traffic cones all over Nashville for construction companies and official DOT sites.

Dennis had called Blinker Lite, securing three brand new bright orange rubber traffic cones for our use, which I picked up, since the company is located in my west Nashville neighborhood. Because our event was officially a charity event, benefitting W.O.Smith School, Blinker Lite was willing to donate the cones.

It was such an unusual assignment to discover Blinker Lite and pick up the traffic cones that I proudly took a "selfie" in the car on my way to the gig, while the brand new cones showed up in my rear view mirror. 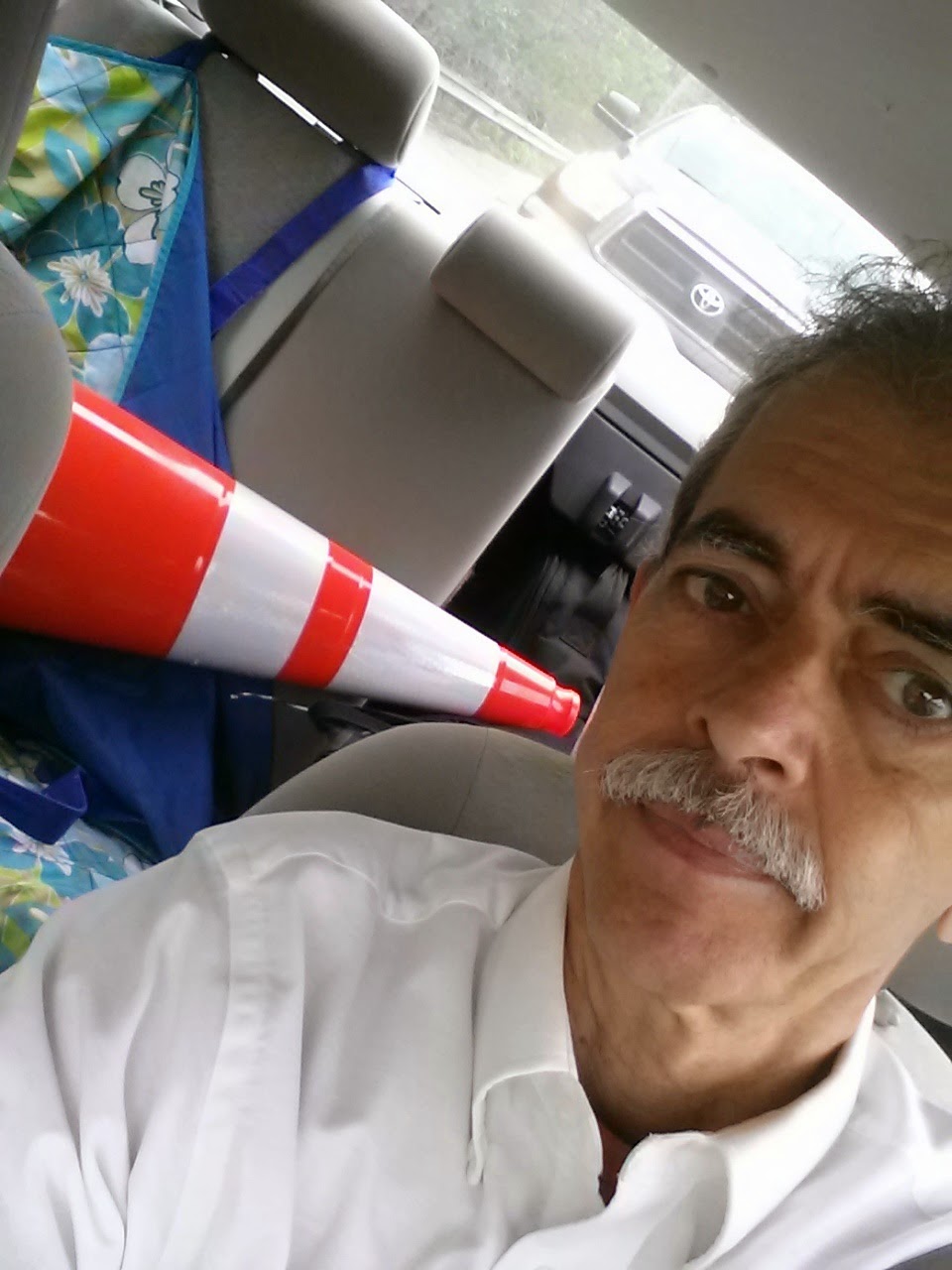 And here's how they looked on Fifth Avenue, preparing for the arrival of the Big Love Bus. 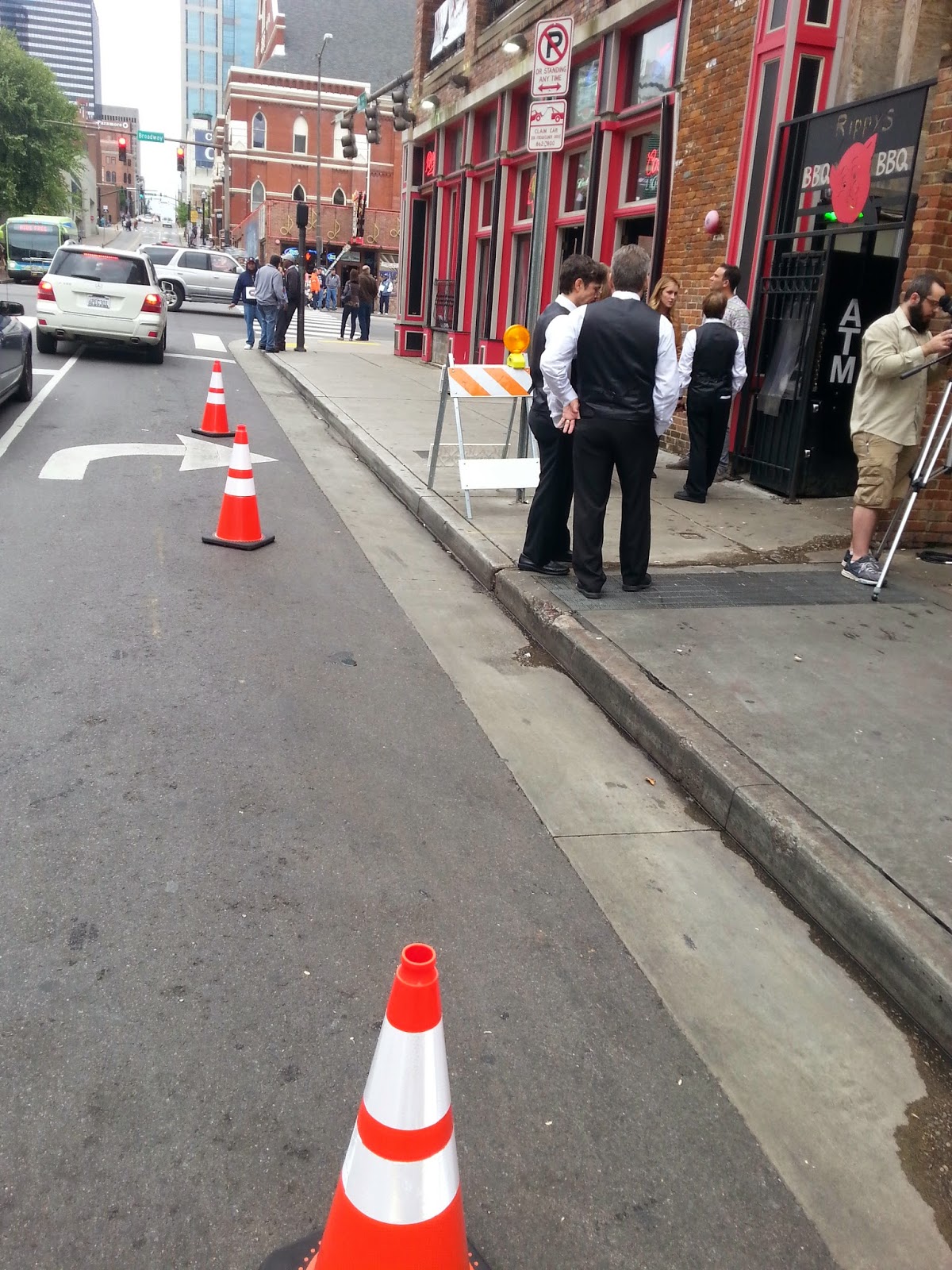 While we were down on the street, we took advantage of the opportunity to pose for a photo. 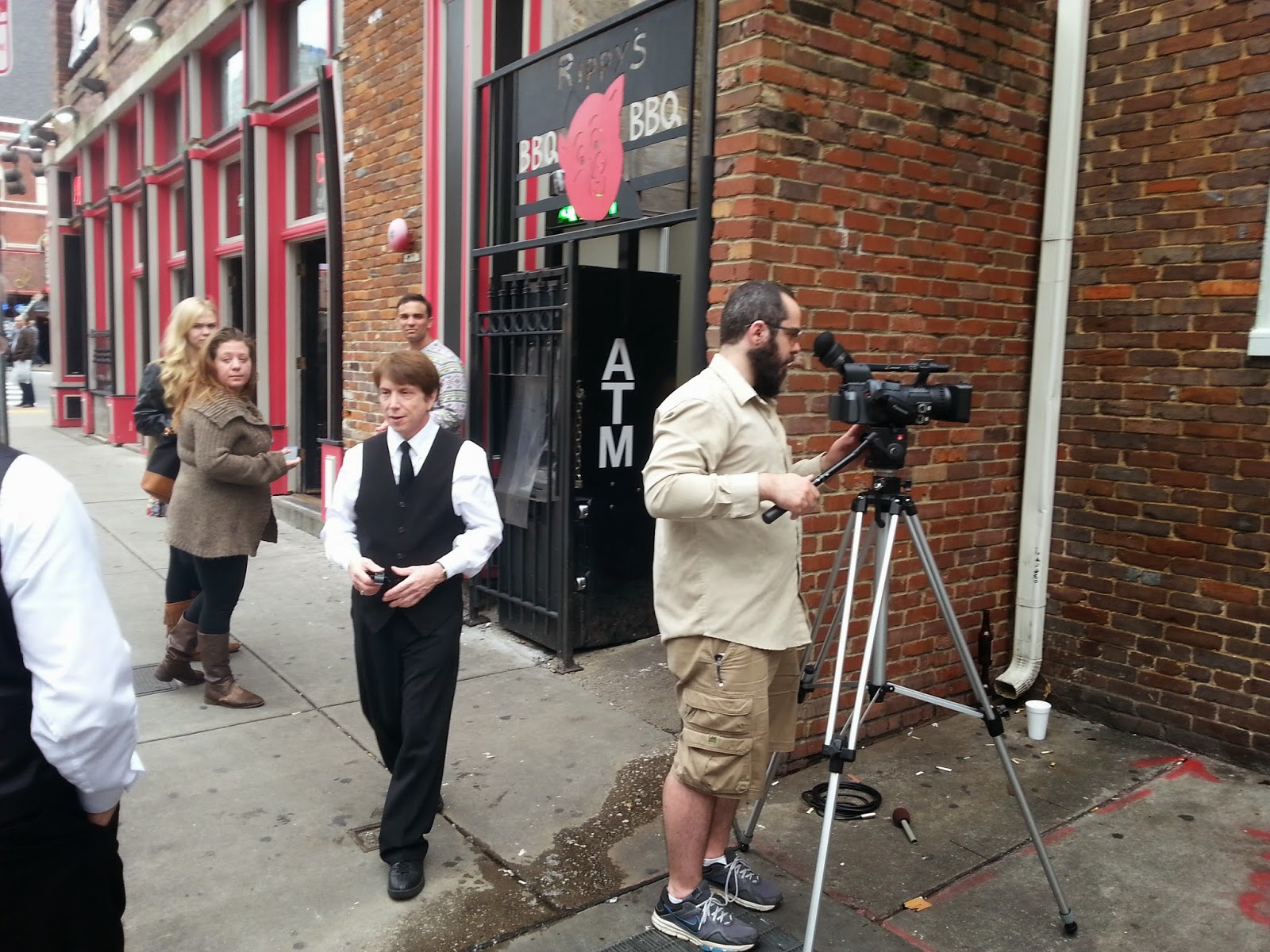 Here's a view from Rippy's rooftop: the bus is for us,
the several semi trucks are for the McCartney show

Here we are, ready to start,
with Rhori Johnston of Channel 5 news, who introduced us 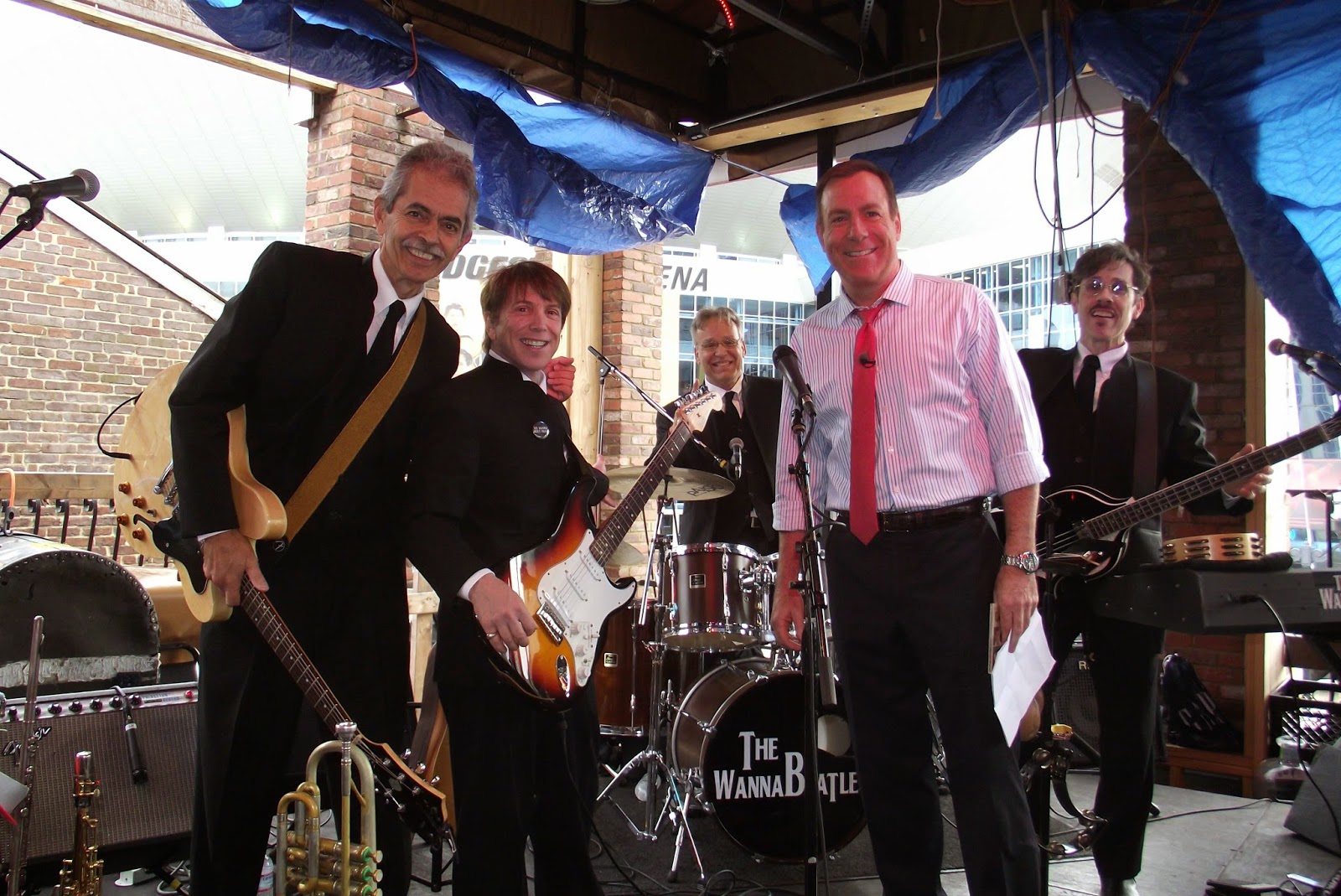 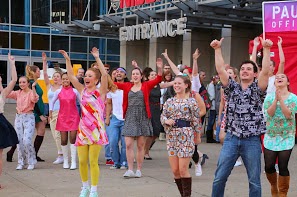 Here they are, adoring the cardboard cutout of Paul 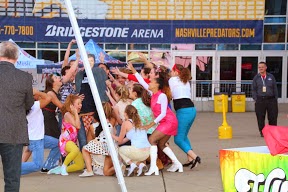 Here are the dancers onstage with us 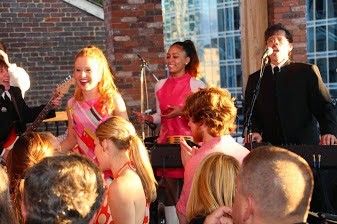 And here's one next to Nathan 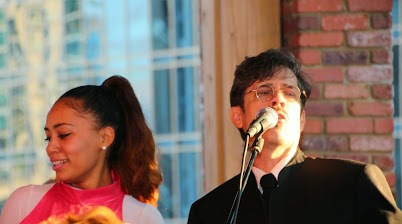 More evidence of tumultuous energy
from the dancers joining us onstage 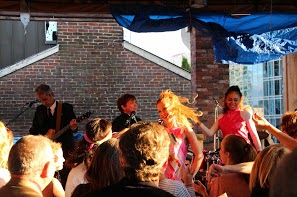 We also had a special guest artist join us, singer/educator Suzahn Fiering, who was recently given an "Honored Friend Award" by Sir Paul himself, for her work with the Liverpool Performing Arts Institute.

We had our good friend Allan Waugh with us running sound. And plenty of friends in the audience, from Richard Courtney to Lucy Hart and members of the Beatles Meetup Group. It was a great show. 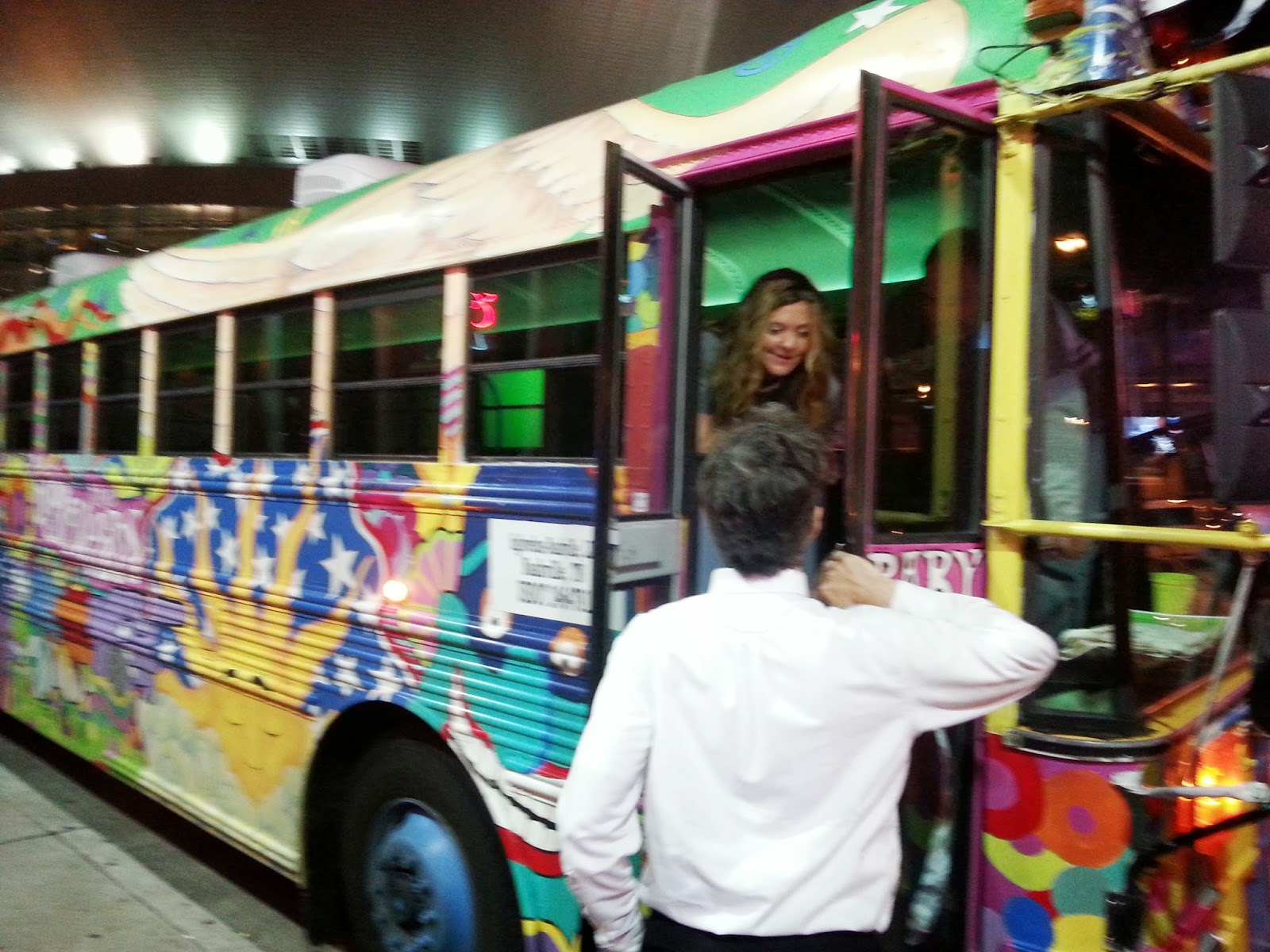 Saying goodnight at the Big Love Bus as they pull away.

If Paul came over to see us, he did a great job of keeping his presence a secret. We understand his show that night went pretty well too.

And both of us made the news that night, on Channel 5.

Welcome back Paul. You can play Nashville any time you want. Thanks to Rhori Johnston for introducing us, Rippy's for making room in their schedule, Suzahn for singing with us, the Belmont Dancers for adding so much energy, The Big Love Bus for one-of-a-kind transportation, and Blinker Lite for the finest traffic cones we've ever used.


Posted by The Wannabeatles at 6:52 PM