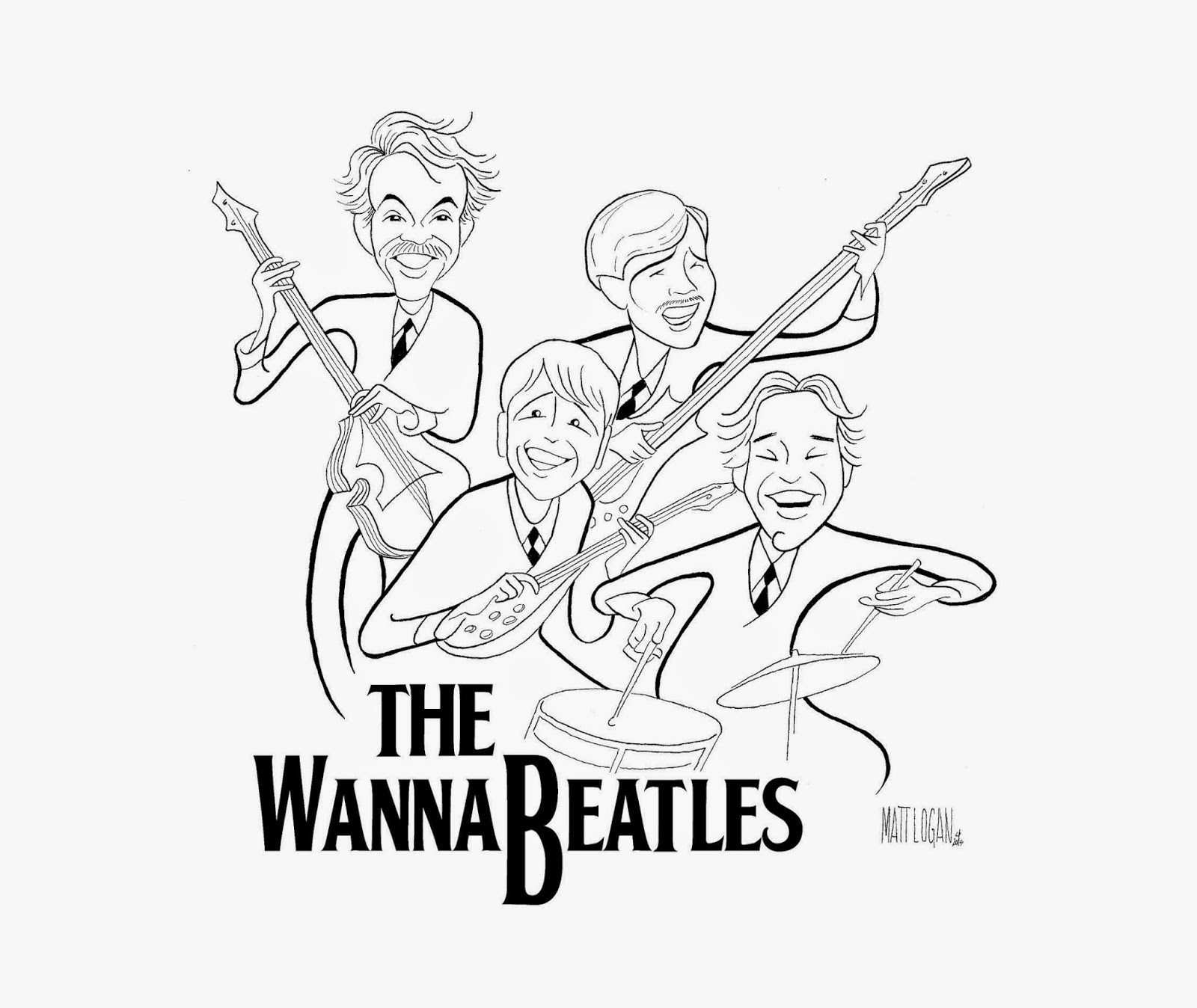 Yes, it's the official WannaBeatles cartoon caricature, as rendered by the inimitable Matt Logan.

We have WannaBeatle Nathan to thank for this gift, who has worked with Matt extensively, and was aware of his talent in this area. Matt has other talents too, including theater design, acting and production. He and Jake Speck started and continue to direct the local theater company Studio Tenn, which has produced musicals as diverse as "Hello, Dolly," "Smoky Joe's Cafe," and "A Christmas Carol," at venues as diverse as the Franklin Theater, TPAC, The Schermerhorn Symphony Center, and their permanent new home - Jamison Hall at The Factory in Franklin..

Matt and Jack are both graduates of CPA, the local high school with an exceptional arts department, and an exceptionally high proportion of WannaBeatle participation.

In fact, Nathan's own status as a WannaBeatle can be traced to his being discovered by WannaBeatle David at a CPA production. Both Nathan and David have children who attend, or graduated from, CPA. David's wife Alice is a full time teacher there, with a background in musical theater.

Matt Logan, a CPA grad, with extensive theatrical credits in New York, has moved back to Tennessee, and continues to help out with occasional theatrical productions at CPA.

And so, when Nathan joined the WannaBeatles, he approached Matt about doing one of his "Hirschfeld" style caricatures of The WannaBeatles. Matt was receptive, but also busy with a multitude of projects for Studio Tenn.

Anyone looking at the drawing with even the slightest awareness of the world of theater will recognize  the influence of Al Hirschfeld, the legendary illustrator who was published widely in New York theater programs and the New York Time for decades.

According to a recent article in the New York Times, Hirschfeld "was an exhaustive chronicler of almost every Broadway show and personality of the 20th century. Gish, Gielgud, Minnelli, Steisand - he drew everyone, and everyone wanted to be drawn by him."

Matt Logan, drawn to the world of theater, was inspired by the Hirschfeld style. He says "I love color, but I'm more intrigued by the relationship between black and white and space. That's something Al Hirschfeld did so beautifully...A line with a hand at the end of it can give you just enough to envision an arm. But if you put color to it, then it becomes about the sleeve rather than the gesture."

Matt is humble about the influence. "I would never put myself in the same field as Hirschfeld. I look at him with such awe. It's a language he created. We just try to learn to speak that language in our own way.

That sounds like The WannaBeatles' own artistic mission statement, inspired by The Beatles, but only trying to speak the musical language they helped establish.

So thanks Matt, for a beautiful connection to an amazing past. We're very glad to be part of your journey.

Posted by The Wannabeatles at 8:36 PM