Superman - the all American hero. The Man of Steel, with blue tights, red cape, and perfect muscles. His motto: "Truth, Justice, and The American Way."

So what does this have to do with The WannaBeatles? Well, Metropolis, besides being the official home of Superman, is also home to Harrah's Casino, who hired us to play the weekend of March 6 & 7.

Metropolis is in southern Illinois, on the Ohio River. That sounds like a long way, but we were relieved to find it takes less than 2 1/2 hours to get there from Nashville. 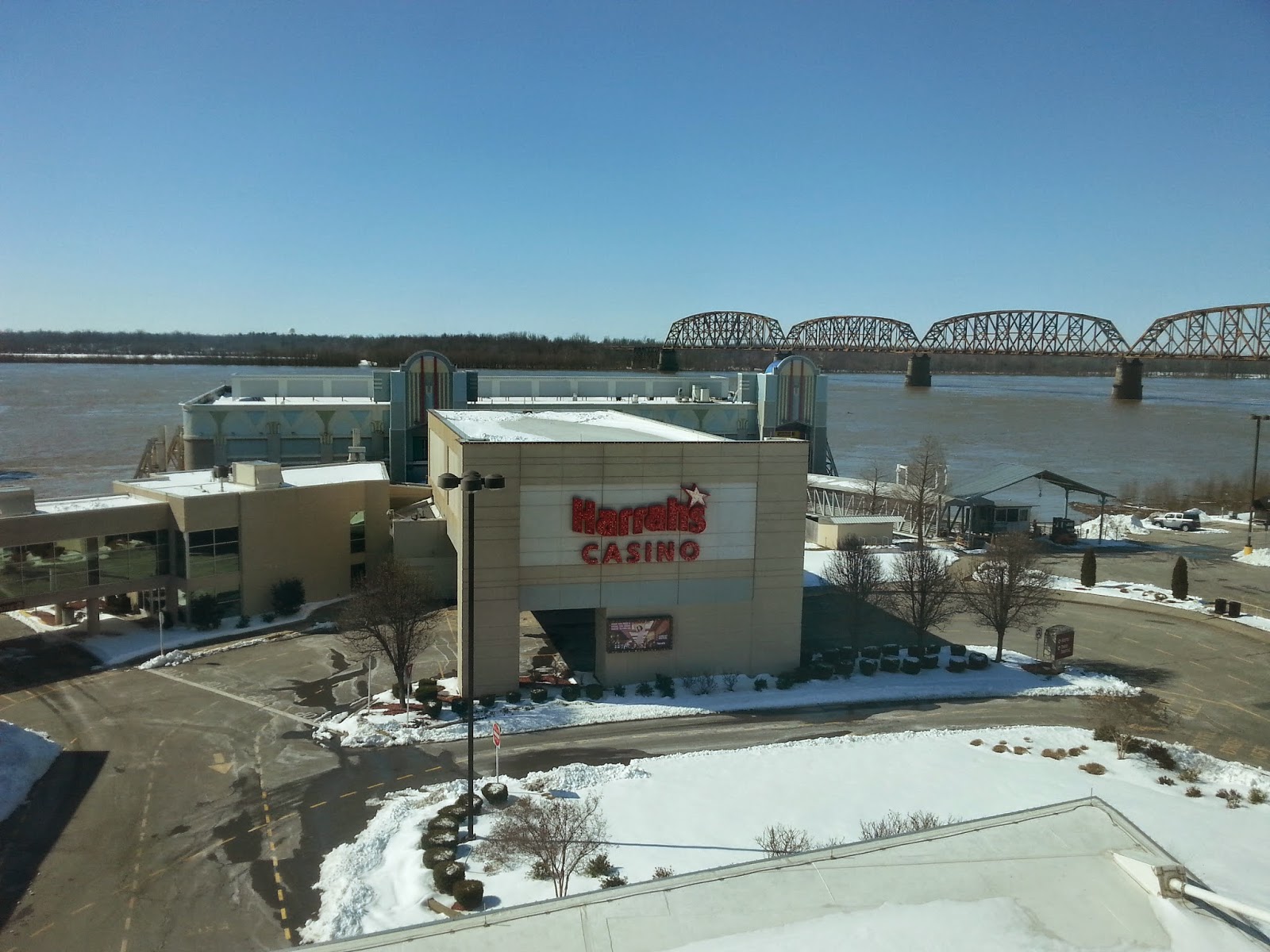 Harrah's on the Ohio River

We have played a casino before (in Cherokee, N.C.), so we know about entering the alternate universe of a "gaming establishment."

We handed in our driver's licenses at the security desk to obtain our badges, which would validate our identity during our stay.

We had complimentary rooms at the hotel, and free meals according to a complex set of credits that depended on the time of day and the prices of the particular restaurant where we ate. We could have a nice breakfast and a nice dinner, or a nice lunch and a nice dinner, but not three meals in one day.

We set up our equipment on their stage, in a small bar which opened onto the casino floor, where thousands of slot machines flashed their seductive lights and rang their celebratory chimes.

We were hired to play four sets, so we had to dig deep into the songlist, and bring out a few non-Beatles extras like "Satisfaction" and "Good Lovin'." And of course, we had to compete with the slot machines for the attention of our audience. But we found some hard-core Beatles fans, who would sing along with every song, and some who got up to dance.

The most exciting part of our trip - or the part with photos we have to share - was Saturday morning, visiting the heart of Metropolis, where a famous statue of Superman guards their courthouse. There is also plenty of Superman memorabilia available at a store across the street from the statue. 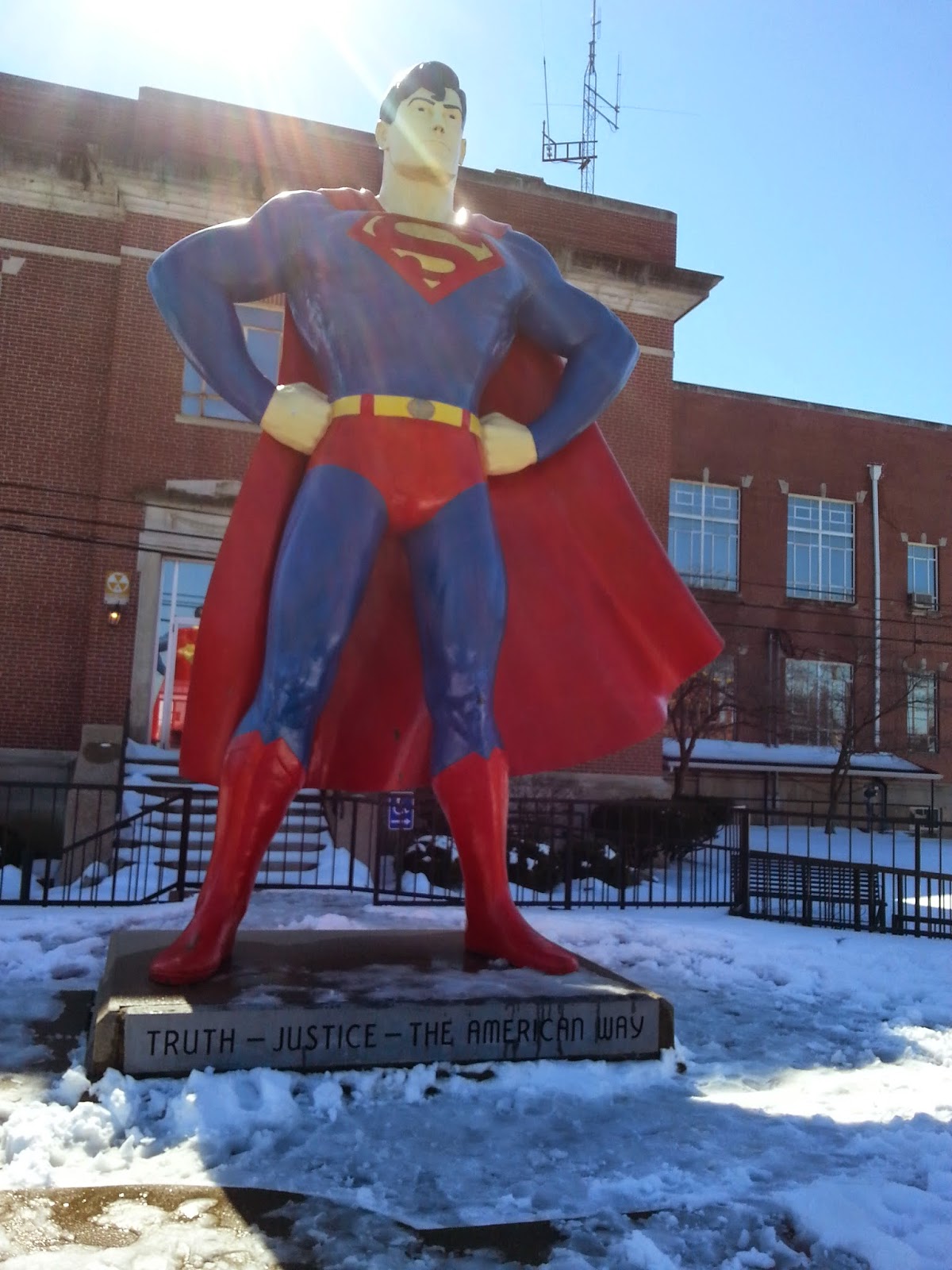 The Superman Statue in the snow 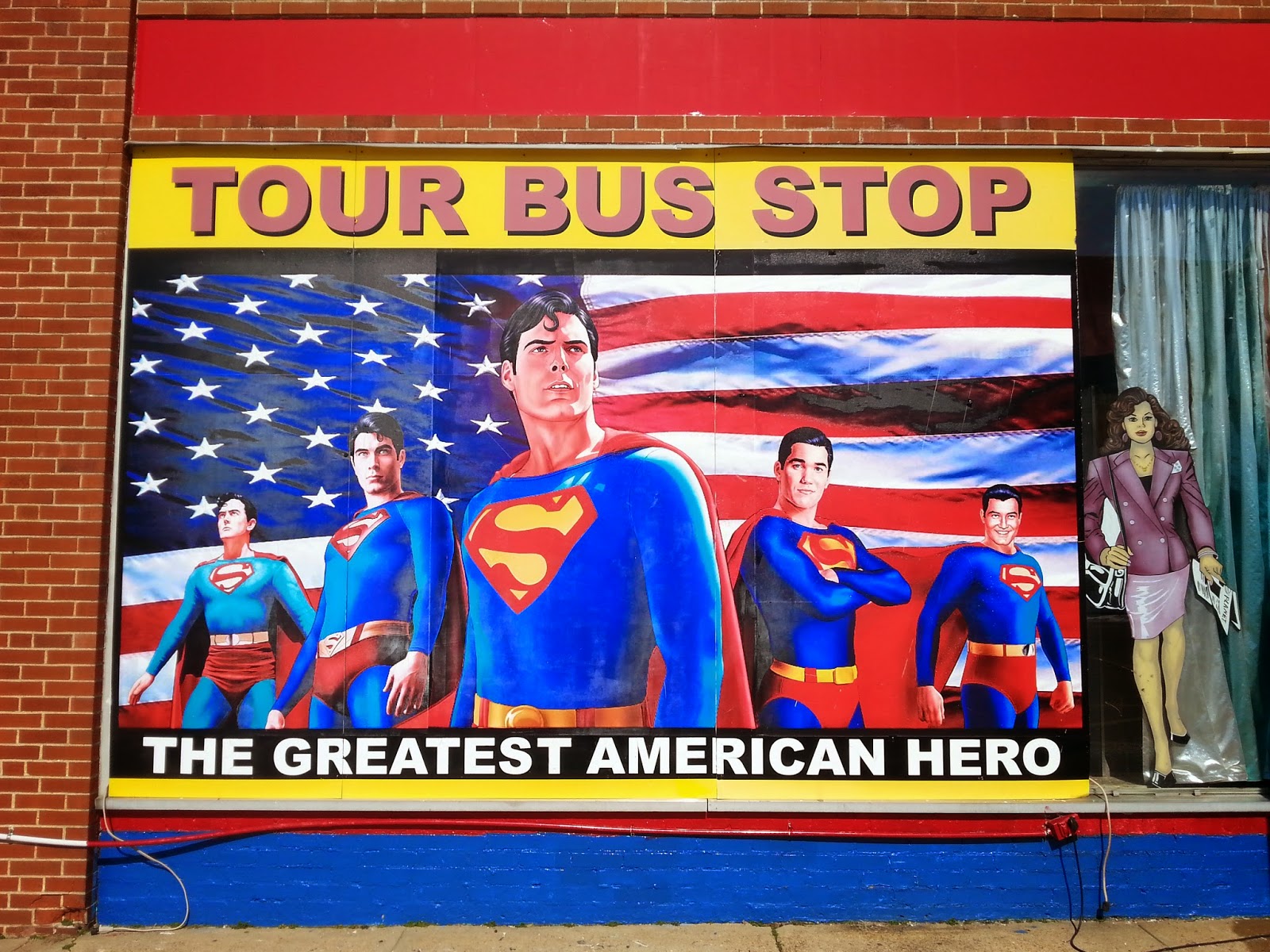 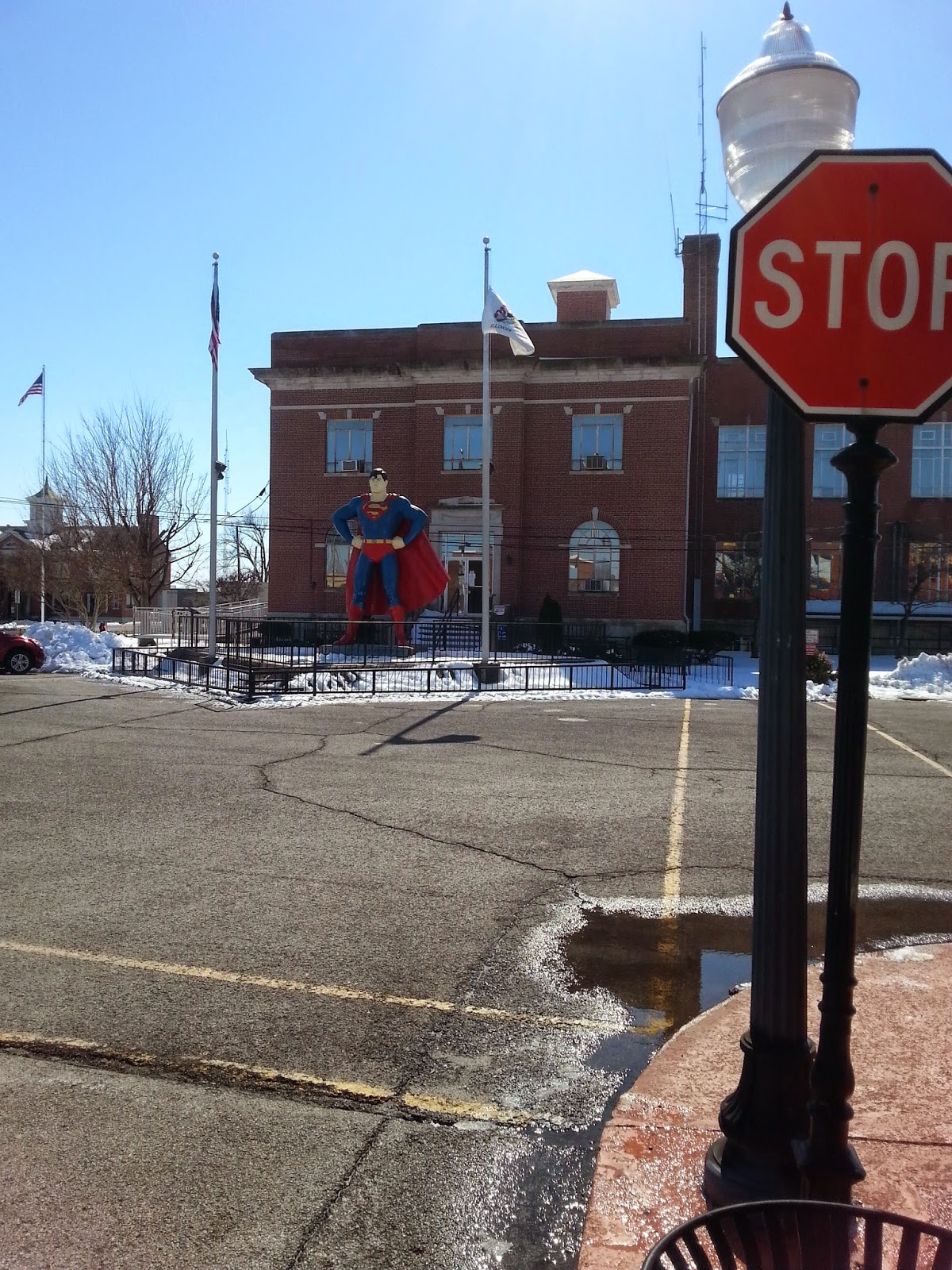 View of the statue from across the street,
where it doesn't look quite so imposing 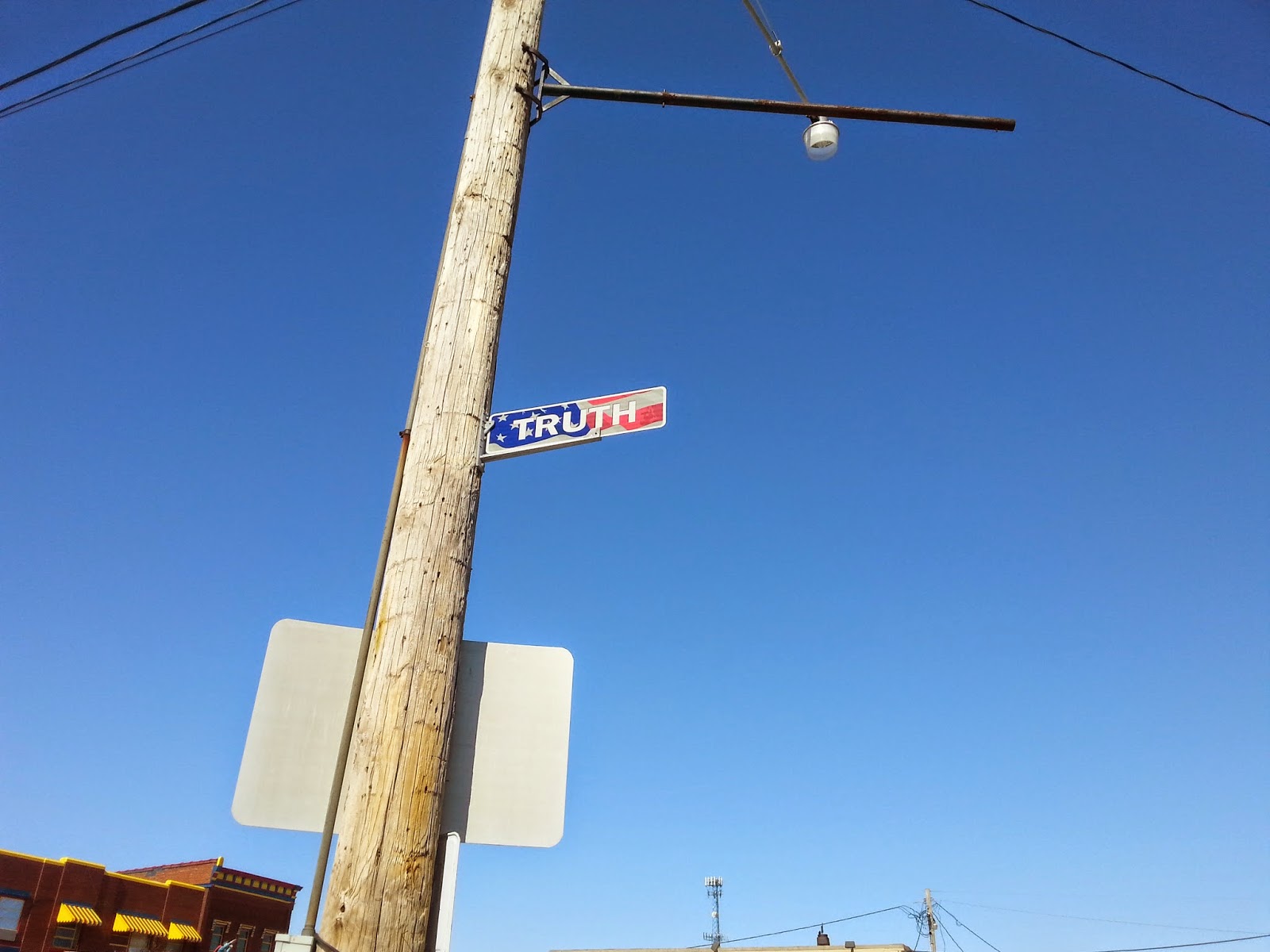 The Statue is located at the intersection of Truth and Justice

(we wouldn't kid you about a thing like that) 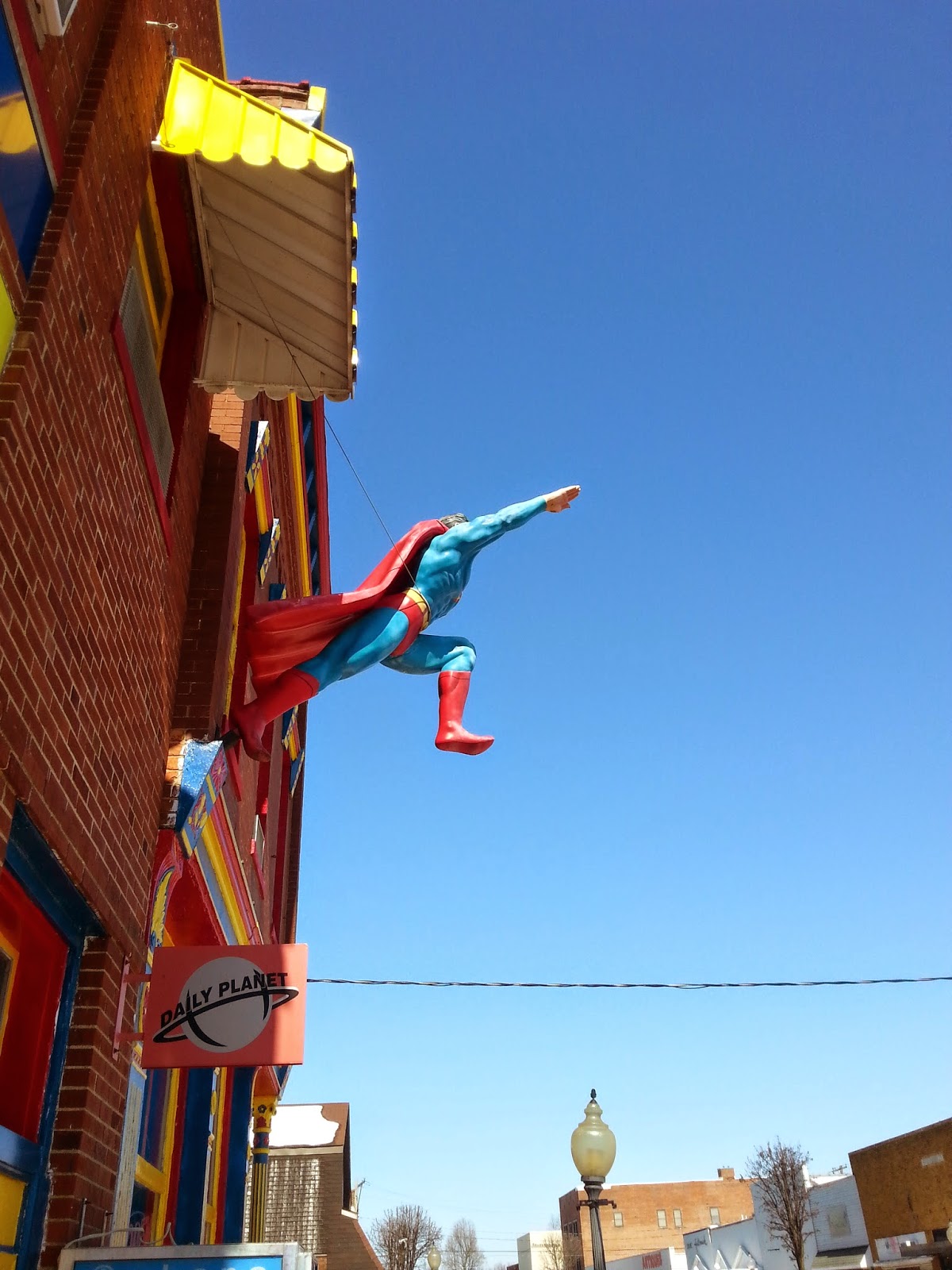 Of course he can fly:
Superman leaps gracefully from a building 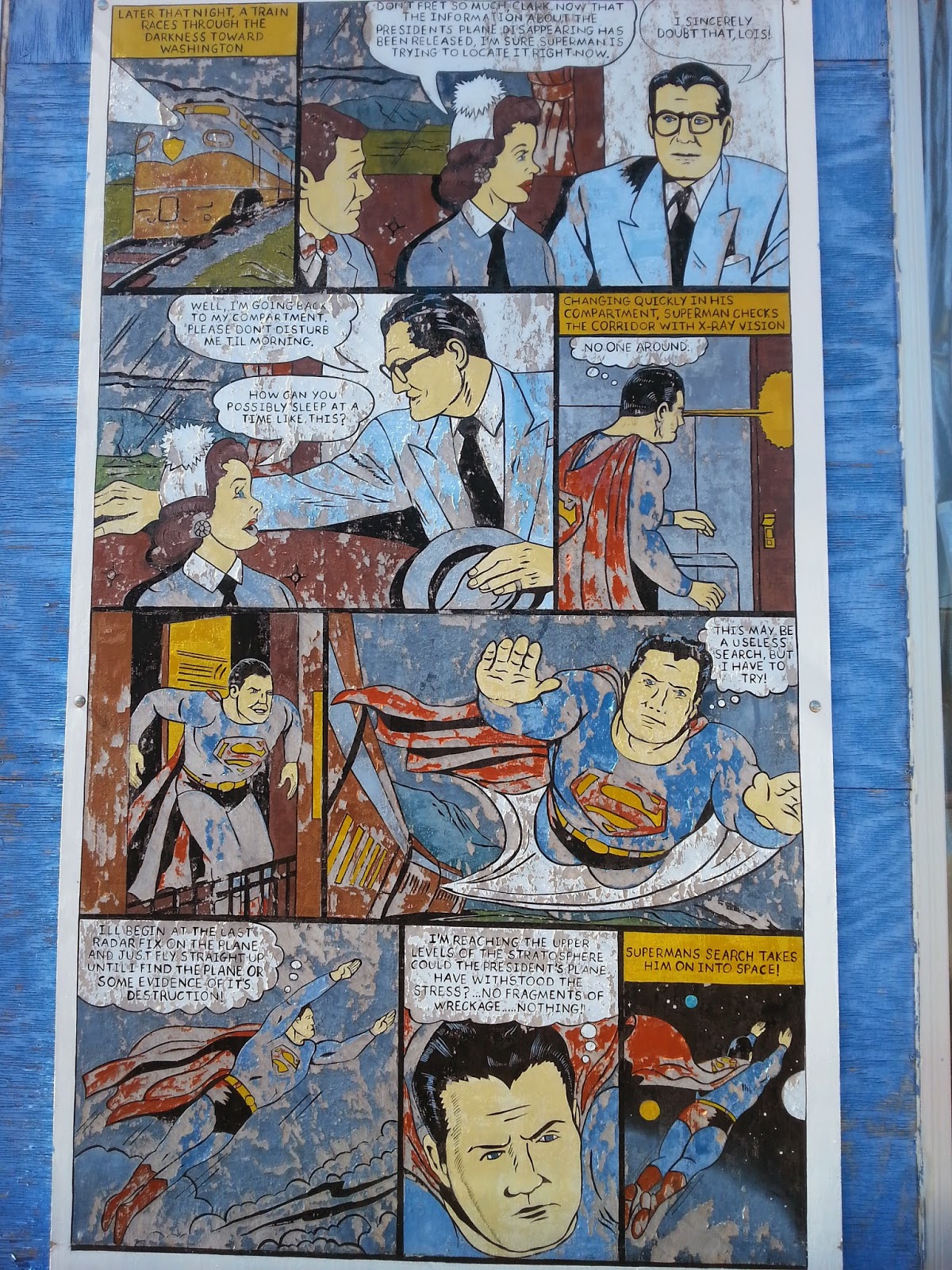 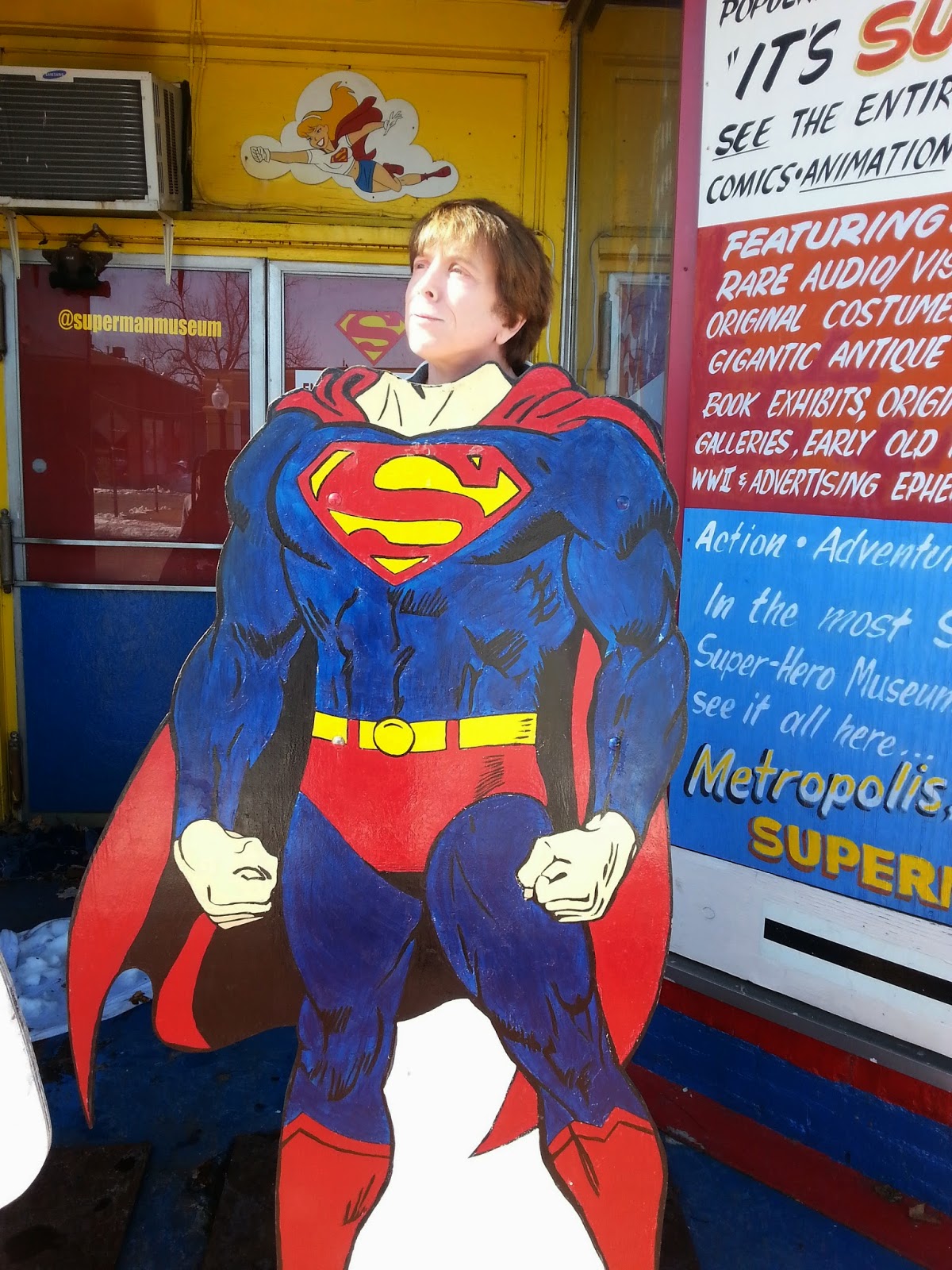 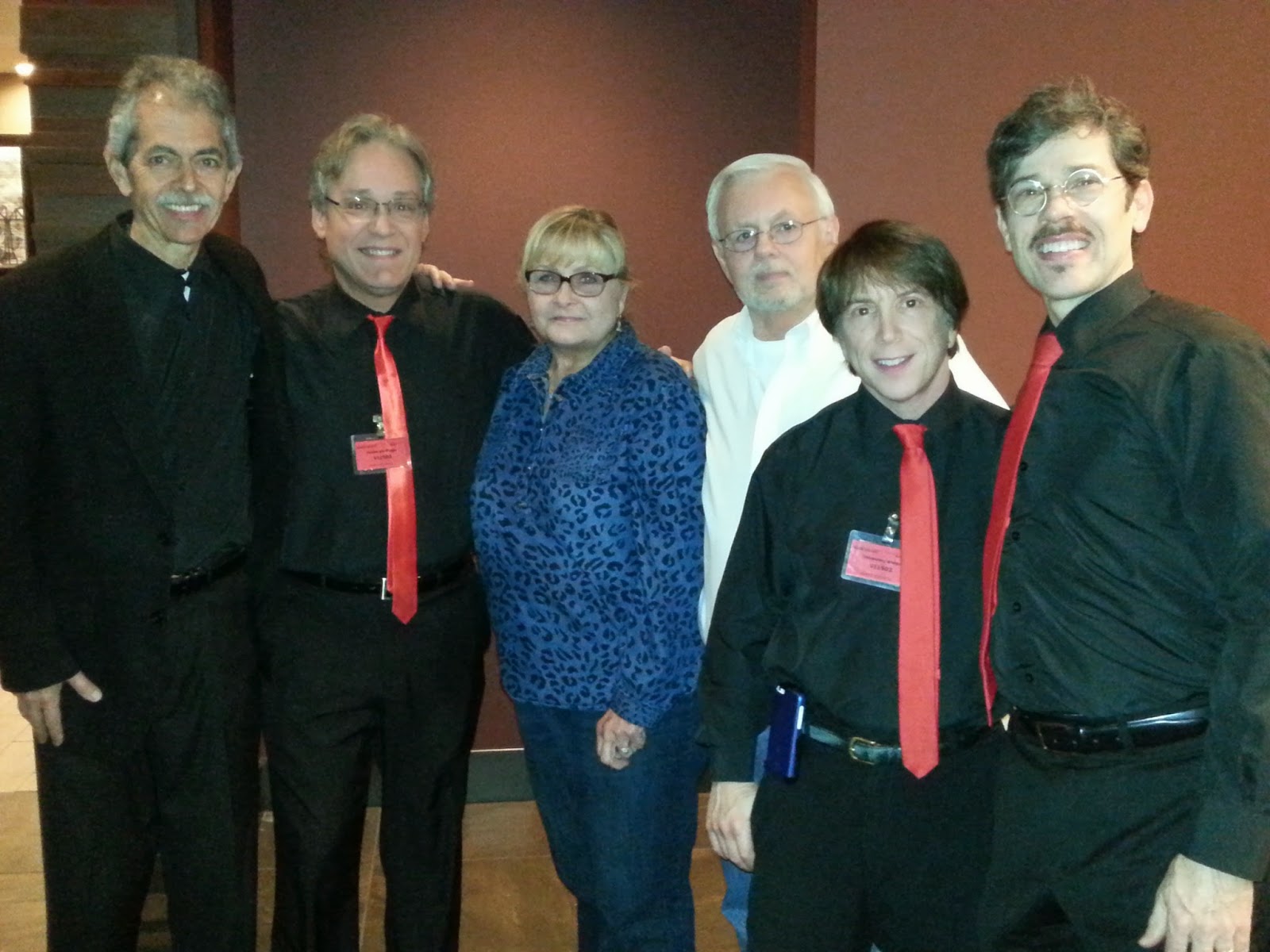 We enjoyed seeing some friends from Nashville. Diane and Dan Drummond drove up to see us, and ate at the same restaurant where we ate on Saturday night, so we had our picture taken with them. 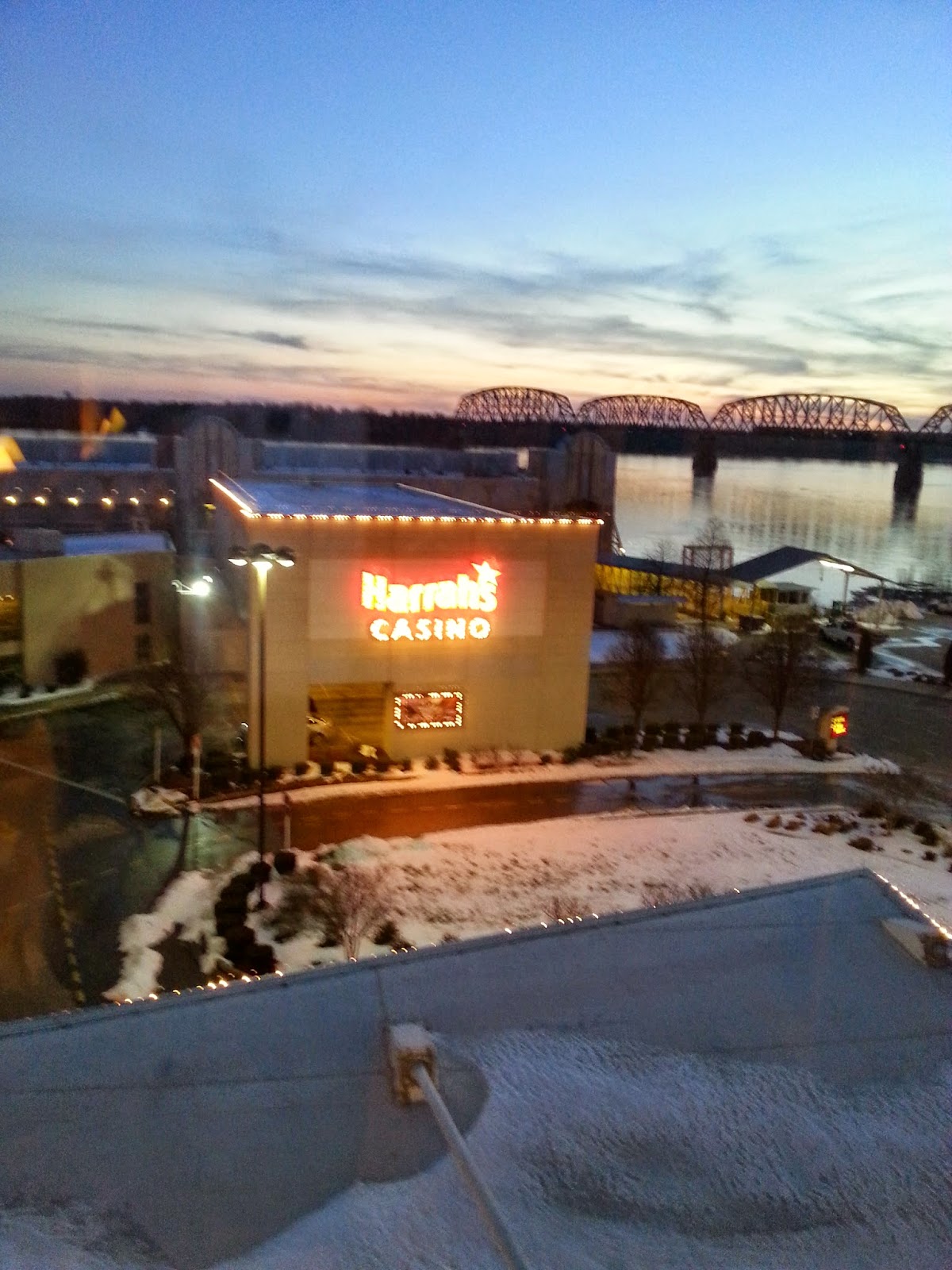 Harrah's Casino, as the sun sets

Somehow, not one single WannaBeatle dropped any coins into any slot machines, so our weekend had neither flashy wins nor gratuitous losses. It was a great weekend to be in the heartland, doing our job for truth and justice, and meeting an American hero.