Abbey Road On The River

The WannaBeatles had been hearing about Abbey Road On The River, "The Largest Beatles Festival in the World," for years, and this year we finally went.

It happens every Memorial Day weekend in Louisville, Ky., which is less than three hours from Nashville. The river it's on is not the Mersey, but the Ohio.

Dozens of bands from around the world gather to play Beatles songs, along with hundreds of fans who share their enthusiasm, soaking up Beatles songs and "peace and love" vibrations, wearing their Beatles tee shirts.

We were booked for three shows in two days, and we wanted to make a good impression, so WannaBeatle Dennis crafted themes for each show to emphasize something about us to set us apart from other bands. 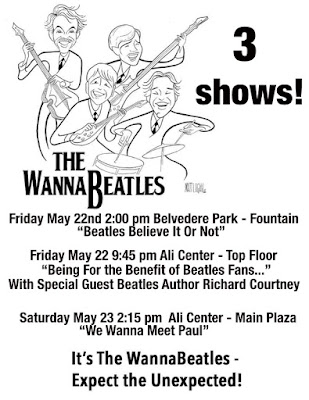 Because there are so many bands on several stages, the festival provides drums and amps for each band to use, to minimize transition time between shows. That meant we didn't have to bring drums and amps, so we didn't need a trailer.

We still had plenty of gear to carry, and after three days we became experts in packing it onto our various carts, getting in and out of elevators, and rolling over cables.

We had some help. We had our friend Lucy to help set up and attend the merch table, and our new intern Jessey to operate the power point on the Friday night show.

We had also designed and produced a pop-up banner to display by our mercy table, which we were using for the first time at AROTR.

AROTR is an outdoor festival, which makes it dependent on weather. The day we arrived, Thursday May 21, was colder than expected.

We arrived in downtown Louisville, checked into the Galt House, and noticed all the horse imagery - this is where people come to attend the Kentucky Derby, so the Galt House has horses painted all over its parking lot, and a bar called Jockey Silks.

Entering the lobby, we could feel the mood of the festival as we checked in. Behind us in line were a couple from Detroit, who had come for the festival. We handed them our flyer. 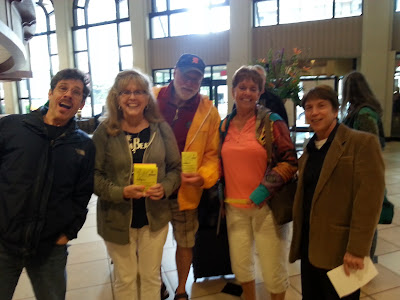 Nathan, Lucy, Gary and Linda from Detroit, and Dennis

We went to the check-in room to receive our wrist bands and laminate passes, then outside the hotel to hear the music.

The Galt House is actually two buildings on two adjacent blocks, joined by a walkway on the third floor. 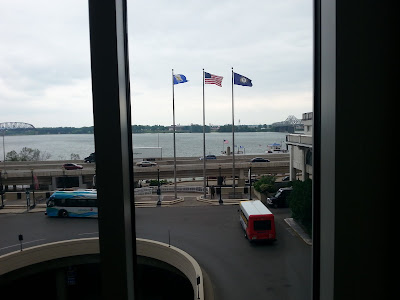 We had come a day early in order to check out Hal Bruce, who is famous for performing an abbreviated medley of 200 Beatles songs. He performs alone with acoustic guitar, and does a great job of providing all the essentials from each song.

We heard some old favorites we'd never tried, like "Glass Onion" and "What You're Doing." We were impressed by his acoustic version of the massive orchestral swell at the middle of "Day In The Life."

We also saw Mario DeSilva, a Nashville friend and fine guitarist, who was there as a performer. 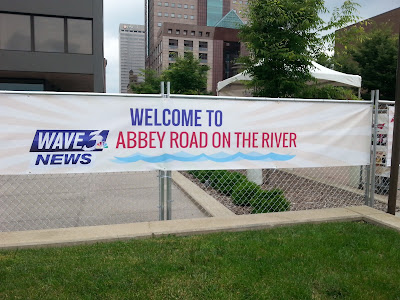 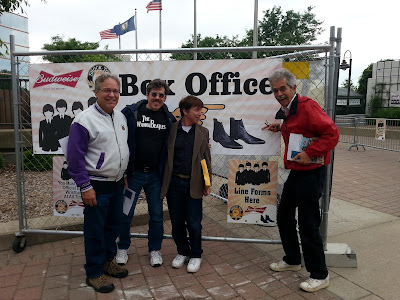 It was too cold to stay outside for long. We retreated to the room, and then headed up Fourth Street for supper. 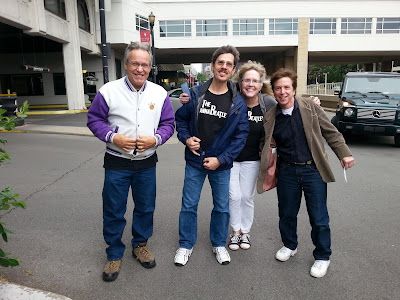 David, Nathan, Lucy and Dennis ready
for our walking tour of downtown Louisville 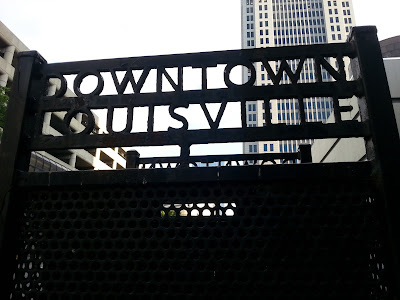 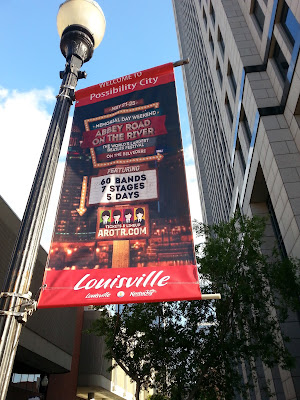 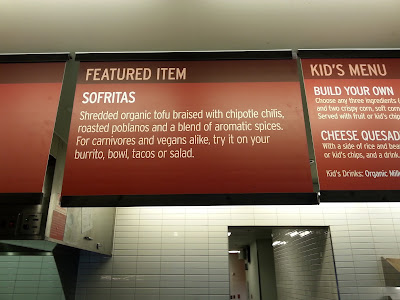 We ate at Chipotle. Almost too hip. 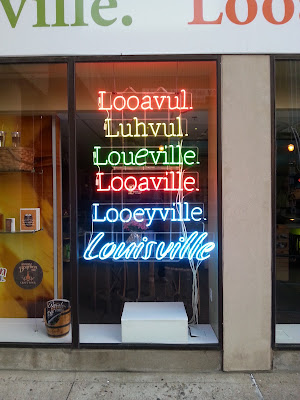 We found out there are several ways
to pronounce "Louisville."


One of the most famous people to come from Louisville is Muhammed Ali. They have a Muhammed Ali Blvd. and a large Muhammed Ali Center downtown, where several AROTR events were staged.

The Ali Center is a modern building with colorful tiles arranged along its sides, in a seemingly random pattern. As it turned out, we had a view from our hotel room of the Ali Center, and could see from a distance that the tiles were arranged in a series of poses of the boxer. The images are barely visible, but still there. 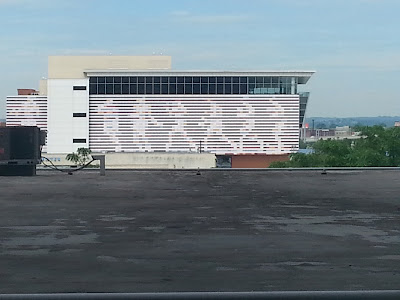 View of Ali center from room 523

Because we had time to review some parts, Dennis and I rehearsed a bit in the hotel room. 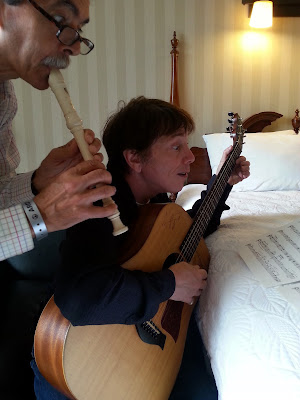 Friday we entered the performance mode. Our show was at 2:15 pm, so around noon we wheeled our gear to the fountain stage, then took advantage of the free lunch at the "commissary" set up behind the main stage.

We set up our merch table on the side of the square in front of the fountain stage. Fortunately, the weather was a lot better than the previous day - sunny and clear. 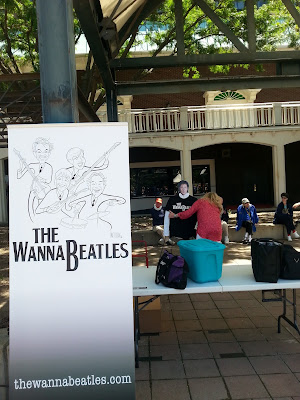 Our new banner - its first day in public

We assembled our gear behind the stage, where a band from Brazil, Fab Girls, were performing a set before us.They are four ladies in red coats doing a fine job of playing Beatles songs, from "Lovely RIta" to "Don't Let Me Down." 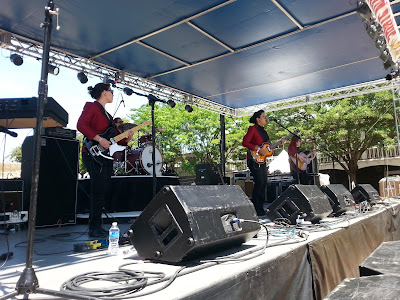 We were wearing our "Shea Stadium" shirts. Lucy got this photo of us, with a mobile yellow submarine in front of the stage. 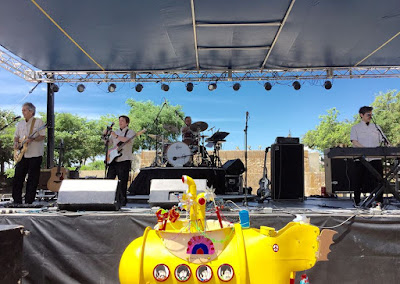 That afternoon, we were interviewed by John Meyers, who is writing a book on tribute bands. He's an ethnomusicologist, a musician who diverted to the academic track. He wrote his dissertation on tribute bands, and is now expanding it into a book.

Friday night was our indoor show, up on the sixth floor of the Ali Center, which gave us a new perspective. 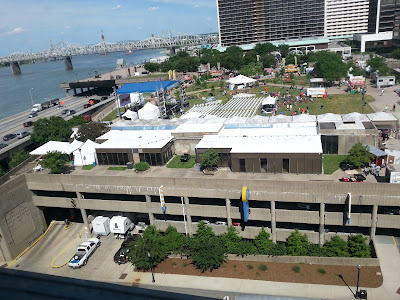 The view of the festival from the Ali Center, sixth floor 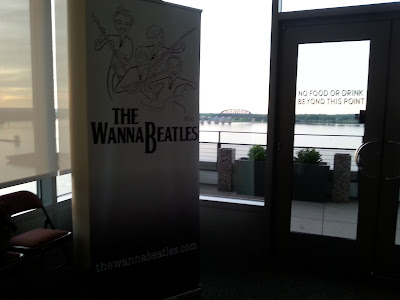 Banner on sixth floor with view of river 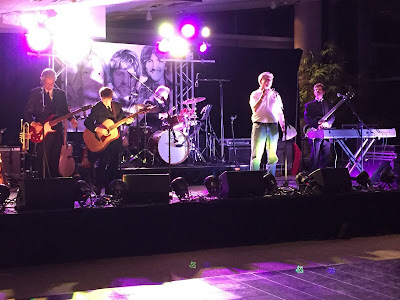 Attending our show was Tony Bramwell, known to Beatles fans as a childhood friend of George Harrison, who ended up working with Brian Epstein during the sixties, and writing a classic memoir called "Magical Mystery Tour."

We gathered after the show in the lounge with Richard and Tony. We had missed the late show from Sixty Four, who were performing the entire White Album, but after their show, Mark Townsend, their guitarist, came through the lounge, and we got to talk to him for a while. 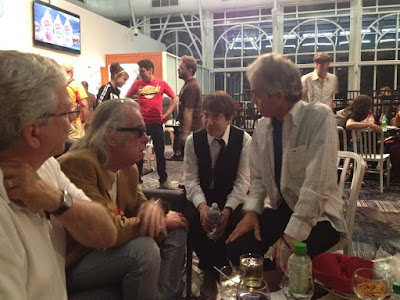 Our final show was another outdoor show, this time on a beautiful sunny day at the plaza outside the Ali Center. We had to check out of our rooms by noon, so we took all our clothes along with our gear on our carts, then rolled it across the festival grounds to the Ali Center. 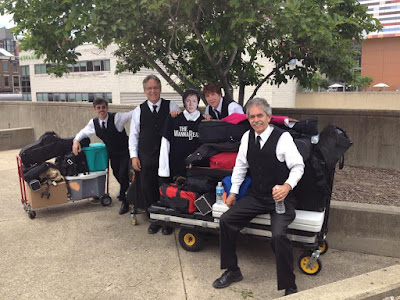 The lads, with cardboard Paul, among our carts & gear

The plaza outside the Ali Center is like a small amphitheater, with seats arranged in a semicircle. It was a good place to play. 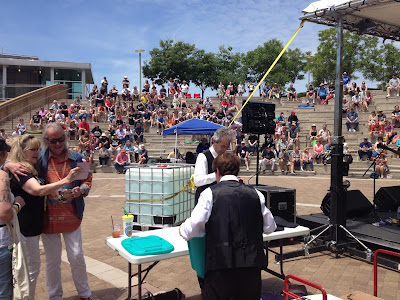 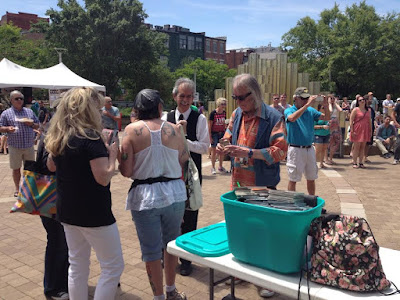 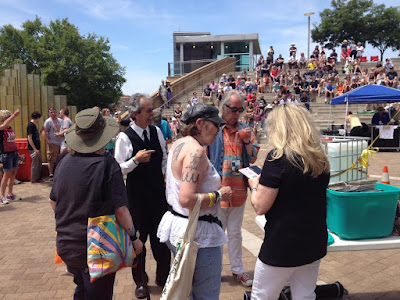 Again, our show was preceded by a set from Fab Girls, and this time they were even better than the day before. 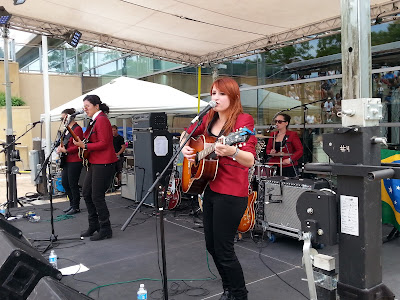 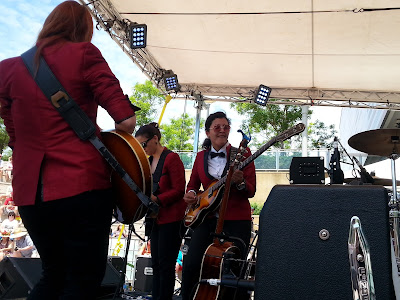 Fab Girls getting into it

We had a larger and more receptive crowd than the day before, and we really hit the ground running. We opened with "All About The Music," and it never sounded so good. I did my wireless guitar wander-into-the-audience thing, which helped engage the crowd.

One indication of the energy we experienced was during "I Want To Hold Your Hand," when three of the Fab Girls came out in front of the stage to do the hand claps. That was a great example of how bands become fans of each other in the whirlwind schedule of a festival, especially a festival dedicated to the music of one amazing band.

After us came Sixty Four, the other Beatles band from Nashville. They were performing with two other guys from Holland, called LSB Experience, friends they had made at previous editions of AROTR.

We had a lot of gear to pack and load onto our carts, and carry to our cars in the parking lot.

We were tired but gratified from our one final show, as we loaded the cars and headed home to Nashville.

There's nothing like Abbey Road On The River, and we're glad we did it. Thanks to Lucy and Nathan for the extra pictures, and all the fine audio technicians and staff who helped run the festival.

Posted by The Wannabeatles at 8:46 PM