It's February 1, there's a little snow on the ground in Nashville, and it's an exciting time to be the WannaBeatles.

We're working on a new album, putting up a new website, learning new instruments and new technology. Tomorrow is Ryan's Bar Mitzvah, a once in a lifetime occasion and gig, when Dennis's son will celebrate his manhood and play "Come Together" on drums with us.

And next weekend is the Grammy Awards. At this time last year, we were very excited about making that trip out to L.A., having been nominated for best album in the Spoken Word category, for "Fab Fan Memories - The Beatles Bond." The photo of us in L.A. says it all. (Nathan, Bryan, David and Dennis wearing our nominee medallions) 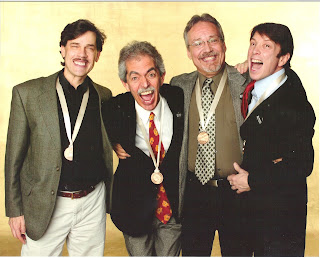 "Fab Fan Memories" is a collection of interviews with Beatles fans. Among the participants who contributed was Janis Ian. She spoke about being at camp at age 13, being "dragged" by her bunk mate to see the movie "A Hard Day's Night." "The music was unbelievable," she says. You can hear her story on the youtube version of the album, (click this link: http://youtu.be/vzVDE27mz70) starting right after the four minute mark.

You can also see a photo of Janis from her teenage years on that youtube video, similar to the shot of her playing the flute which is on the cover of "Fab Fan Memories." (that's Janis in the lower right hand corner) 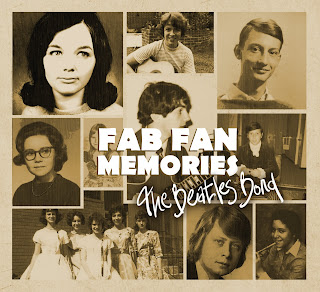 Because Janis participated in our CD, we were delighted to hear the news that she was nominated for a Grammy this year in the same category: Spoken Word album.
It's an audiobook version of her autobiography, with her own voice reading the complete text of  "Society's Child," which came out in 2009.

The title comes from her first hit record, which gained attention, and controversy, in 1967, by daring to mention interracial dating. Her book opens with a description of a concert in Encino, California, where protesters shouted at her as she tried to sing the song. She retreated in tears to the dressing room, where the promoter asked her to go back onstage, if only to establish a victory over the protesters. It was a very dramatic moment for a teenage folk singer, and she tells the story very well. 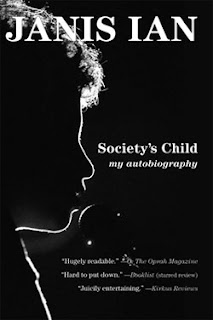 A few weeks ago, Janis did a book signing at Parnassus Books, on a rainy Sunday afternoon. The place was packed.

Parnassus is another local treasure, a bookstore started by author Ann Patchett. When Davis-Kidd closed, there was a void both economic and cultural in Green Hills, but Parnassus has more than filled the gap, and restored vitality to the neighborhood.

It's encouraging to see a local business try something creative and blossom from the response. Parnassus has already expanded, with a children's room and a cooking room, and is sponsoring a talk by Al Gore tomorrow, which is far too big for the bookstore. Gore will be interviewed tomorrow at Belmont's McAfee Hall by author Jon Meacham, former editor of Newsweek, who has settled in Nashville. check out www.parnassusbooks.net

So the WannaBeatles take advantage of not being nominated for a Grammy this year by working on our new album, writing our blogs, developing our website, and improving our show, and congratulating our friends who are doing well.

We even made a little video, using a Chuck Berry hook and Nathan's pounding piano licks to say "Go Janis!" in our own WannaBeatley way.

As we discovered last year, being nominated for a Grammy is plenty of excitement. If you don't win the Award, it doesn't mean you haven't accomplished something.

We hope Janis wins. She's a winner in our book.

-The WannaBeatles, Bloggin' Bryan, 1Feb13
Posted by The Wannabeatles at 12:47 PM