The WannaBeatles are the subject of a documentary film, which was made by Stanley Karr, currently a senior at Nashville School of the Arts.

For a 2 minute peek, here's a link to the trailer: http://youtu.be/CAKtoiBSg_Y

(it includes a candid moment at a WannaBeatles rehearsal, where David says "we sound so horrible" and Dennis responds, "we were born to suck." There they are on display, perfectionism and wit, two of our magic ingredients.)

Stanley has been into film making and performing arts for most of his life. He was born in Nashville, then moved when he was 3 with his family to Maryland, where he attended a summer performing arts camp in Bethesda at age 6. Inspired by Disney movies, he was drawn into film production.

Returning to Nashville at ten, Stanley participated in Kids on Stage (KOS)(www.kidsonstagetn.com), a summer arts camp in Lieper's Fork, where he learned camera techniques, lighting, sound and editing from director Rod Daniels. He also studied video journalism at KOS with videographer Jennifer Moran.

Like many students at KOS, Stanley moved on to the BGA JAM, a more concentrated music camp for teenagers, held each summer at Battleground Academy in Franklin. The Jam (www.bgajam.com) was started and is run by the indefatigable Laura Hill, who treats each of nearly 200 students like an artist on her label, carefully selecting them for the band and style of material they will work on for the week. Stanley played piano there, and volunteered to serve as M.C. for the concert that concludes each week of the camp.

That's how Stanley became something of a sensation at Jam Camp, as he took the stage, assuming a gruff-voiced stage persona to draw excited cheers from the crowd. 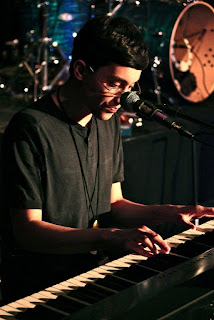 Jam Camp is also where Stanley met half the WannaBeatles, because David Toledo and Bloggin' Bryan are both instructors there. In addition, he knows WannaBeatle Dennis because the Karrs and the Scotts both attended The Temple. So when he began to think of a more serious project, like a documentary, The WannaBeatles seemed like a good choice.

Stanley attended Currey Ingram Academy 5th through 7th grade, where he joined an after school club on independent film making. Zac Adams, an experienced videographer, "taught me how to work a camera," says Stanley.

After home school 8th grade, Stanley entered Nashville School of the Arts, where he's been 9th through 12th grade. The WannaBeatles documentary has taken much of his senior year. He has posted it on his youtube channel, stanleykarrproductions.

Stanley intends to submit clips from the documentary to the National Academy of Television Arts and Sciences, for a possible Student Production Award. The ceremony for those Awards will occur in April at Watkins College in Nashville.

Watkins College brings another WannaBeatles connection: their Film Dept. head, Steve Womack, helped turn our 2009 rooftop concert (a celebration of the final public performance by the Beatles on the roof of Apple Records in London, January 30, 1969) into a video. You can click here http://youtu.be/7PHDO9cliHY to see us performing "Get Back" on the roof of Rippy's in downtown Nashville, filmed by Watkins students, who are credited at the end, along with Steve Womack.

Nice job, Stanley! Good luck with the Student Production Award. We're glad to work with you, and know we'll be seeing a lot more good stuff from you.