It Was 50 Years Ago Today

A company called Southern Plastics, located on Chestnut Street in Nashville, had pressed a vinyl record called "Please Please Me" for a Chicago label called VeeJay, by a group called The Beattles (misspelled on the label with two "T's"). The record didn't sell, and didn't get played on the radio.

History doesn't announce itself and tell us to take notice. It just happens, as a part of the natural flow of everyday business.

And it can get lost, unless someone comes along with the patience and persistence to retrieve the facts.

February 7, 1963 - exactly fifty years ago - can now be remembered as the date of the release of the first Beatles record in the U.S., thanks to the efforts of a fan named Bruce Spizer.

In his book "The Beatles Are Coming! The Birth of Beatlemania in America," Bruce writes:  "For years, the official release date of the first Beatles single in America remained unknown, but a recently discovered document solved the mystery. In a telegram dated February 1, 1963, Vee-Jay president Ewart Abner informed publisher Concertone Songs that "PLEASE PLEASE ME BY THE BEATTLES WILL BE RELEASES FEBRUARY SEVEN."

Here's the telegram, along with the record, as pictured in the book: 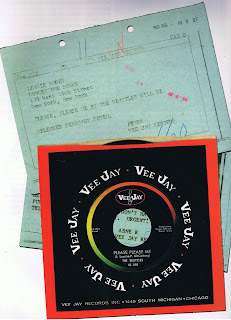 Southern Plastics is mentioned in Bruce's book, among three pressing plants that VeeJay used. In 1971, Southern Plastics changed its name to United Record Pressing. It's been at the same location since 1960, and has been doing very well, based on recent interest in vinyl.

The WannaBeatles recently took a tour of United. We were led around by Jay Millar, their marketing director, who is very well informed. He explains the process of how vinyl records are made, along with some history of the factory, which has a "Motown Suite" upstairs, with an event room that hosted parties for such customers as Stevie Wonder, Hank Williams Jr., Wayne Newton, and the Cowsills.

The full story can be found at their website, http://www.urpressing.com/history.php

Here's a photo of Jay showing us the pressing machines. 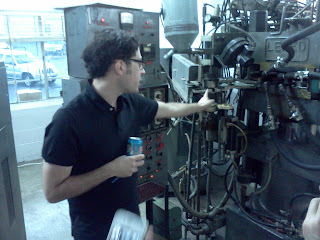 These machines are not made anymore, so United keeps full time machinists on staff, to fabricate parts that wear out and custom install them. They are operating 24 hours a day, to keep up with high demand.

Being in that building, and discovering that the first Beatles records released in the U.S. were pressed there, made us want to release a vinyl record of our own, as a 50th anniversary tribute. As we looked into the possibility, the practical questions of how much it would cost, along with how much time it would take, outweighed the thrill of making our own vinyl record, even with the historic connection.

But it sure makes a fascinating idea. United is a great, if underappreciated, example of Nashville's role in pop music history.

We would highly recommend touring the plant for anyone interested in pop music history. They charge $5, but there's nothing like it.

And Bruce Spizer is a great resource for information on the Beatles recording career. He's now published eight of these books. You can find out more about him at http://beatle.net/meet-bruce-spizer.

And we're proud to say Bruce appears on our "Fab Fan Memories" CD, telling his own story of eating macaroni while watching the Beatles on Ed Sullivan. It's the only mention of food on our CD, but then Bruce is from New Orleans, so that may explain it.

Fifty years ago, something happened that didn't look important at the time. But fifty years later, we all can see that it was the beginning of something that affected millions of people. Lots of girls were screaming, and lots of guys decided they wanted to be in a band. And so the WannaBeatles are part of that story, and happy about it.

Posted by The Wannabeatles at 10:51 PM