We officially played outside the U.S. earlier this year with a show at Harrah's Resort in Cherokee, N.C., which is on property owned by the Eastern Band of the Cherokee Nation. But that's a technical departure.

Now Dennis is in Italy, traveling with his wife Lori and son Ryan. But Dennis never stops working on behalf of the WannaBeatles - it's part of his nature, and a major factor in the recognition we've received in our semi-illustrious history.

Two days ago, Dennis sent us this message:

The calendar looks clear for Sept 13th for TN State Fair. Unless I hear otherwise pronto (Italian for "soon") I am going to book it.

The European office of The WannaBeatles is in full swing.

Among the replies, David wrote this:

Wow! We're in Europe now.
They better watch out!
A dynamo has just landed in their midst.

Yes, a dynamo has landed. The next day Dennis was in Florence, where he found the local Hard Rock Cafe ("Italy's newest") and set up a meeting with their talent buyer, who's name is Tommaso (Italian for "Tommy").

Dennis sent him a follow up email, and Tommaso sent this reply:

Dear Dennis,
Really thank you for your visit, it has been a nice and interesting meeting, hope we’ll move forward to plan something together, it would be great to see The WannaBeatles live on our stage!
Have a great day
T.

It certainly helps that foreign club owners can speak English so well, but then, Rock'n'Roll is fundamentally an English language phenomenon.

Gotta say, it's exciting to contemplate the possibility of playing in Europe. How to overcome the practical detail of paying for the trip is a separate question, but maybe with some other gigs over there  and a kickstarter campaign we can make it happen.

Just to keep the excitement alive, here's a screen shot of their website: 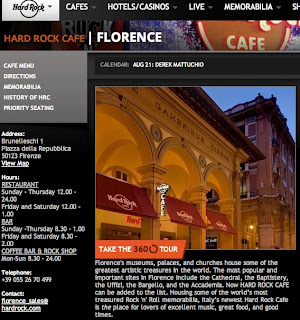 The address of the Hard Rock, on Via De Brunelleschi, is named for the Renaissance architect who designed the famous Il Duomo of Florence Cathedral. Il Duomo is to Florence like the Eiffel Tower is to Paris - every tourist sees it. I'm sure Dennis will take pictures to show us when he gets back.

Meanwhile, the Nashville office of the WannaBeatles is in full swing, with Nathan filling in for Dennis. Here's part of a message he sent yesterday:

The WannaBeatles Nashville office is functioning despite the absence of Boss.  This morning I initiated contacting string players in Lebanon through the Cumberland University. The instructor was very friendly and glad for my contact, but we'll have to see if any of his students are available.

Also: We have a Radio Interview on Monday morning, August 5th, at  9:05 a.m. for the Lebanon, TN, Capitol Theatre gig. The interview can be by telephone, or we can drive to Lebanon. They're planning on telephone. I'll find out if they can do Skype… Stay tuned.

And Dennis, or Boss as Nathan sometimes calls him, responds from overseas with this message:

Way to go, Nathan! As we say in Italian, "You Make me proud."

So, whether we end up going to Europe or not, we still have some shows to think about. Coming up August 8 is a show at the Capitol Theater in Lebanon, Tennessee. Nathan has confirmed that we will have a group of string players with us at that show.

Further down the road is a concert August 24 at the Sandler Center for the Performing Arts in Virginia Beach. Nathan, who has already written half a dozen string charts for an entire orchestra to perform with us at that show, has just confirmed that a harpist will be joining us there. This will give us an authentic way to present "She's Leaving Home," the beautiful ballad from the Sgt. Pepper album.

We're also planning on doing a fully orchestrated version of "I Am The Walrus," and our special original song "In '63," which appears on our new album. The song contains lyrics about Virginia Beach, to help celebrate the fact that the town was officially founded 50 years ago.

Thanks to Dennis for carrying the torch to the other side of the globe. And thanks to Nathan for keeping the home fires burning. It's great - and exciting - to be a WannaBeatle.

Posted by The Wannabeatles at 9:00 AM