Last weekend we had three shows on three successive nights, covering 1350 miles, which was pushing the envelope for these Nashville based boys.

It fell together as it should, with a Friday and Sunday at places we'd played before, and then a Saturday night at a new venue for us, falling in between, "on the way."  They were all very enjoyable shows, and we survived the travel without much more than a minor traffic jam to slow us down along the way.

And now we can say we've played in Dizzy Gillespie's home town.

Friday July 12 was our return to the Marshall Theater in Lewisburg, TN, which is about an hour south of Nashville. It was originally called the Dixie Theater, and it's celebrating 100 years of existence. We had the Marshall County Children's Choir join us onstage, singing along with "Yellow Submarine," "Obla-Di, Obla-Da," and "All You Need Is Love."

It was great to connect with local folks. We were delighted to discover next door to the theater a recently opened classic soda shop called 50's Ice Cream Parlor. They fed us complimentary sandwiches before the show, (nice selection of subs) and we couldn't resist returning after the show for their delicious ice cream. Part of our rationalization was that we had to drive that night 136 miles to get to our hotel in Ringold, Ga., so eating something sweet would help us stay awake for the drive. 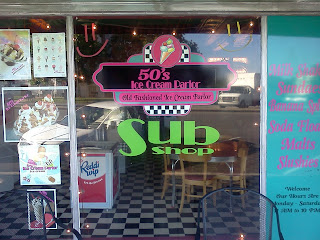 The storefront of 50's Ice Cream Parlor in Lewisburg, TN

Jo, Tammy, Elvis, Hannah and Sarah, who is Hannah's mom, and the co-owner of the newly opened restaurant. She said she wanted to come see us play, but had to tend to the shop. They usually stay open till 10 pm, but when customers are still there ordering ice cream, they stay open. We were there at ten, and beyond, along with people who'd been to the show. 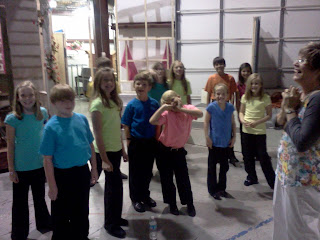 Kids of the Marshall County Children's Choir with their director Elise Dumser, backstage, excited about the show. 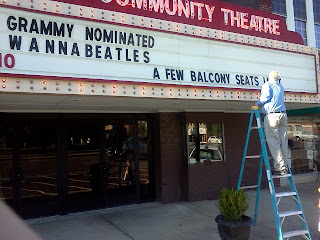 Putting up the letters that say "A few balcony seats left." 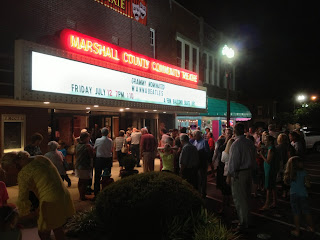 And the crowd before the show, with the sign lit up. (photo by Allan Waugh, our sound man.)

We had a great time, signed autographs, ate ice cream, packed up and left the town square headed toward Shelbyville, heading east to connect with I-24. We crossed the time zone just before Chattanooga, losing an hour, then pulled into a nice Hampton Inn at Ringold, Ga. at 3:30 am EST.

That put us closer to our next destination, but still required us to rise at 7:30 to leave by 8 am.

This might be a good place to mention that we're no longer in our 20's, and sleep deprivation is not as easy as it used to be.

But we made it easily through Atlanta (except for one moment where Dennis, our New Yorker, pulled across four lanes of traffic in less than 15 seconds to catch the exit for I-20 East, making us all feel like we were in the Big Apple for an instant), across Georgia, through Augusta (where I was born,) stopping at a Chick-Fil-A outside Columbia, SC, then continuing on to Cheraw for our Saturday night show there.

Being a jazz fan, I had heard of Cheraw as the home of Dizzy Gillespie. I suspected it was a small town, and one to escape from, if one is destined to become a legendary trumpet player. What we discovered is that it is also very historic, being one of the oldest inland towns of South Carolina.

It turned out that the theater, called Theater on the Green, was next to the statue of Dizzy Gillespie. 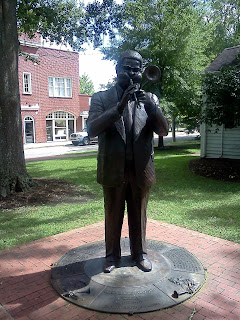 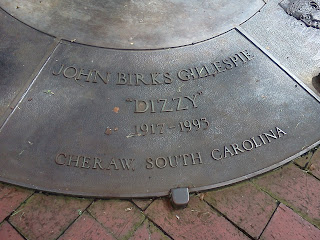 The inscription: John Birks Gillespie, 1917-1993
On the adjacent block, the front of the restored Theatre On The Green, where we played that night. There's a poster on the door with our picture advertising the concert.

A local photographer named Mark Moore took some shots of our show.
This is the link to his site, for those who may be interested in prints:

During the segment when we recreate the Beatles on Ed Sullivan, which puts me in the middle.

David came to the front of the stage to play tamborine and sing harmony on "Norweigian Wood." 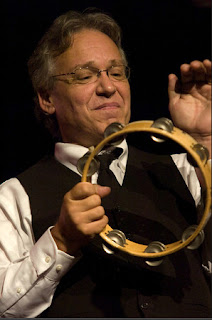 And lots of folks came up to dance on "I Saw Her Standing There." 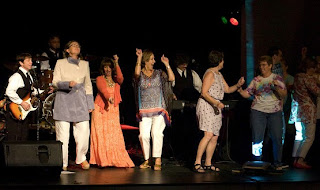 We also had a talented local guest, Francis Santo Domingo, who did a beautiful version of "Yesterday" and a rockin' rendition of "Back In The USSR." 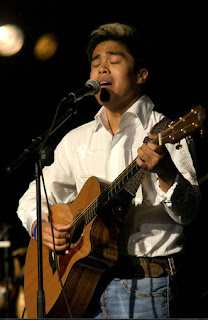 Instead of a hotel, we were invited to stay at a local B&B, two blocks from the theater. It's called Spears Guest House, owned by Larry and Kay Spears. They had four rooms for the four of us, each one designated by the name of a Beatle. I stayed in "George," or The Garden Room.

Our host Larry is a great storyteller with lots of music in his past. He talked about guitars and some of his old pals from the area, like Bunky Odom, who ended up as a roadie for the Allman Brothers, in the famous black and white photo on their "Live At the Fillmore" album.

Larry and Kay had left us their charming house to ourselves, with the kitchen stocked with breakfast goodies. It was our first night to sleep more than four hours on this weekend tour, so we appreciated it.

I woke up early, and enjoyed walking around the town, after sitting on the front porch with a cup of coffee. Here's how it looks on a summer morning: 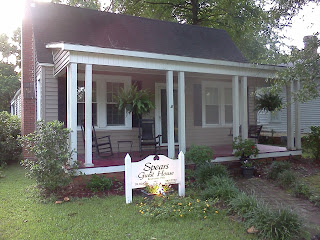 And here are some local sights:
St. David's Episcopal Church - the one built in 1916, not the original, which is down by the river. 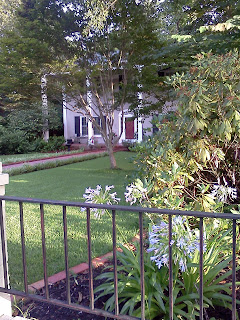 A pretty house on Market Street. 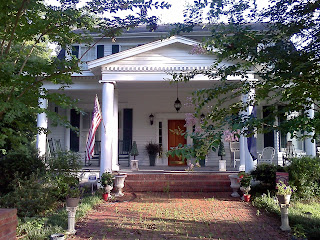 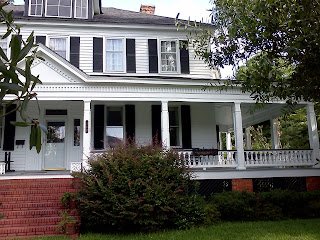 And another, with an especially generous front porch. 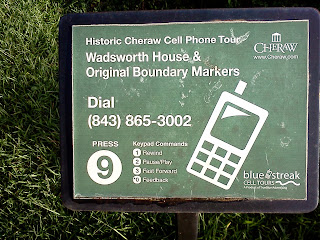 The link between past and present, via technology - but the call wouldn't go through because of poor cell phone reception. However, it's worth noting that the original town square was laid out in 1768 by Joseph and Ely Kershaw. The same year St. David's was founded under King George the Third. That was before there was an Episcopal Church in the US, and before there was a nation known as the United States.

In 1865, General Sherman came through Cheraw, but left it essentially untouched. The local Merchants Bank was "the last bank in the entire south to honor Confederate money," according to the brochure that comes with the cell phone tour.

All of this makes a fascinating background for the emergence of Dizzy Gillespie, their most famous son. There's a park honoring Dizzy at the site of his birth, another two blocks from our B&B.

Here's the marker at the park: 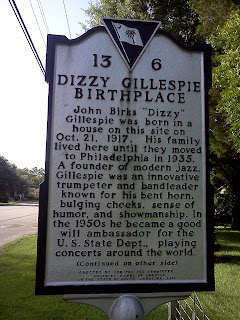 And here's the fence made to resemble musical notation, portraying the impish melody of Dizzy's famous bop tune, "Salt Peanuts." 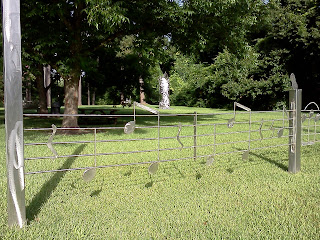 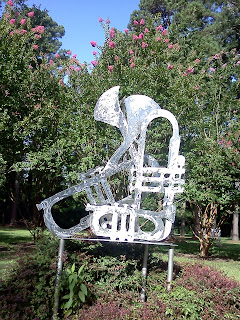 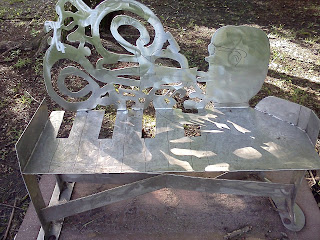 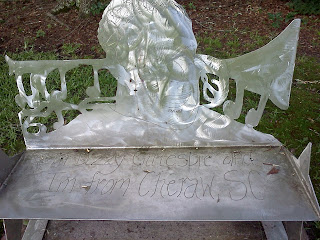 On our way out of town, we stopped at the Dizzy statue once more, and posed puffing our cheeks out.
We only needed four hours to get to Hilton Head, so we left at 10 am, heading for Florence, SC, to catch I-95. We were warned by Larry that Society Hill, a small town on the way, was a speed trap. He said if you go too fast, they'll catch you for speeding, but if you go too slow, they'll steal your hubcaps.

When we got to Society Hill, the speed limit was 35, and I was driving, very careful to stay below that limit, but also watching out for potential hubcap thieves.

At Hilton Head, we played the Magnolia Theater at Sun City. We were delighted to hear it was sold out. We had friends and family in the area, but we couldn't get them seats, so they patiently sat in the wings of the stage during our show: Mina and Bennett Burnside, sister and brother musicians, Jam Camp stars, who were there on vacation, and Nathan Bistis, my nephew by marriage, an Episcopal priest who was recently assigned to a local parish.

The Magnolia Theater is modern, spacious, well-equipped, and versatile, but it couldn't accommodate our need for a medium sized projection screen behind the drum riser, so we ended up doing our show "old style" -  just playing the songs and entertaining people.

It went fine. We had enthusiastic audience participants on "When I'm 64," "Betty," and "Live and Let Die." We enjoyed the show, the hospitality in the dressing room (cheese and crackers, pizza, fruit trays, soft drinks, etc.) and meeting people in the lobby after the show.  We met one guy who had been in the audience for the Ed Sullivan show on February 9, 1964; he said he couldn't hear the Beatles playing because the screaming was so loud.

That was the conclusion of our 3 day tour. The next morning, David woke up especially energized, and was ready to drive us all the way back to Nashville, which was about 8 hours in nice weather.

We appreciate Lewisburg, Cheraw, and Hilton Head, all great places to visit and play music. We had a great time, and hope to return. Thanks to Dennis for making these things happen, and to Nathan for covering the transportation department. Thanks to Cheraw's local radio guys Jay and George at WCRE 93.9 for a wonderful interview and a special wood and cardboard guitar built in 1964 that we showed off onstage. Thanks to Mark Moore for some great photos.

And thanks to Dizzy Gillespie for playing Theatre on the Green, giving us another link to music history.