Our evening gig on Sept. 18 was a party for the Endodontic Associates, at their Cool Springs location.

They had erected a huge tent over their parking lot, and set up tables with record album covers as decorations. They had even installed a chandelier decorated with vinyl albums. 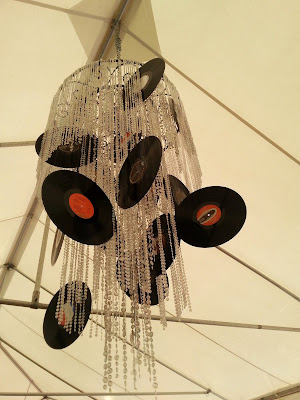 It was a small stage, but we made it work. 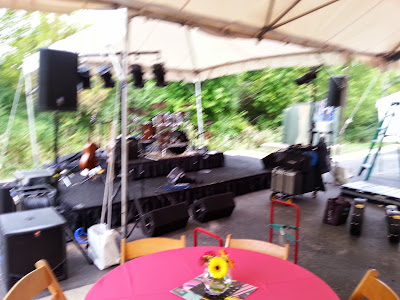 Technical note: it's not your eyes making the photo appear blurry. It's Bloggin' Bryan not yet having learned to hold the cell phone absolutely still while taking a photo.

We had Allan Waugh, our favorite sound man, there to set up the PA. 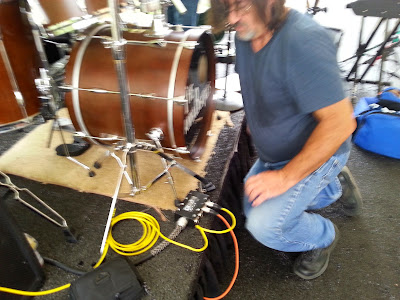 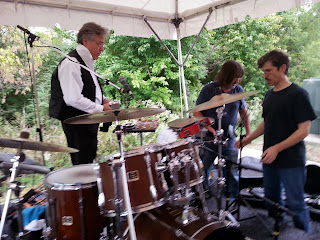 David, Allan and Nathan setting up

We knew from the decorations and the hippie costumes that we were dealing with people in the mood to hear the music and have a good time.

But we didn't know that they also had planned to bring The Love Bus to the party. 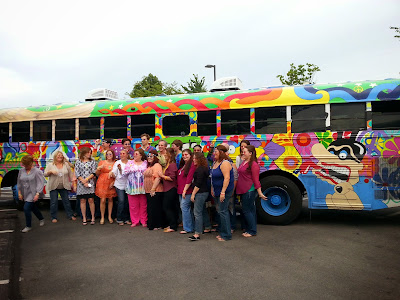 Big crowd at Love Bus in the parking lot

Big Love Bus is an imaginative company, operating in Nashville and Knoxville, that has bought, refurbished and painted some old school buses, turning each one into a "party bus" with a distinctly 60's theme.

We got to pose in front of it. 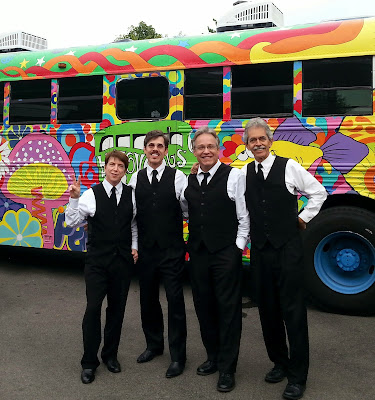 And we got to go inside the bus, and hang out a while. 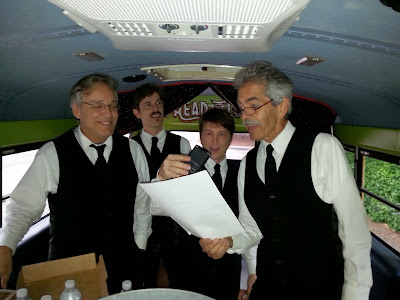 We were so comfortable inside the bus that we turned it into a mobile studio. Dennis used his portable micro recorder to rehearse and record the four of us reciting a promotional spot for Hippie Radio's upcoming "Groovin' and Cruisin'" party.

On board the bus, we met Glenn, our driver. We learned that he is not only an official school bus driver but also an elected City Commissioner for Kingston Springs, TN.

Glenn's story includes living in school buses growing up on The Farm in Summertown, which is mentioned in an article about Glenn and the Big Love Bus that was published by The Tennessean.

We made plans to connect with the Love Bus again. We invited them into our plans to celebrate Paul McCartney's return to Nashville. We set up an afternoon show at Rippy's rooftop, across the street from the Bridgestone Arena, on Oct. 16, the night of McCartney's show. We invited the Love Bus to bring nearly two dozen dancers from Belmont to the Arena as a "flash mob" on the street responding to our music coming from the rooftop. We had to set up a parking spot on 5th Avenue in front of Rippy's explicitly for the Love Bus.

But that's another blog.

Meanwhile, we had a good time playing for the Endodontic Associates as they pretended to be hippies for an evening. And after a day that included playing earlier at TPAC with Richard Courtney, we knew the wheels on the bus had gone round and round for The WannaBeatles - one more day unlike any other, making music, making friends, and having fun.

Posted by The Wannabeatles at 3:31 PM