Sewanee: The town. The school. The gig.

It's a small town -- really more of a village -- sharing a mountain top with an illustrious college. The mountain is Monteagle, and the school, often called Sewanee, is officially named The University of the South.

Sewanee is an odd combination of country village and college town. It's more interesting and sophisticated than other small towns, but more relaxed and rustic than other college towns like Athens or Chapel Hill.

The WannaBeatles played there on September 26 at the 4th annual Angel Fest, which occurs in the newly constructed Angel Park. 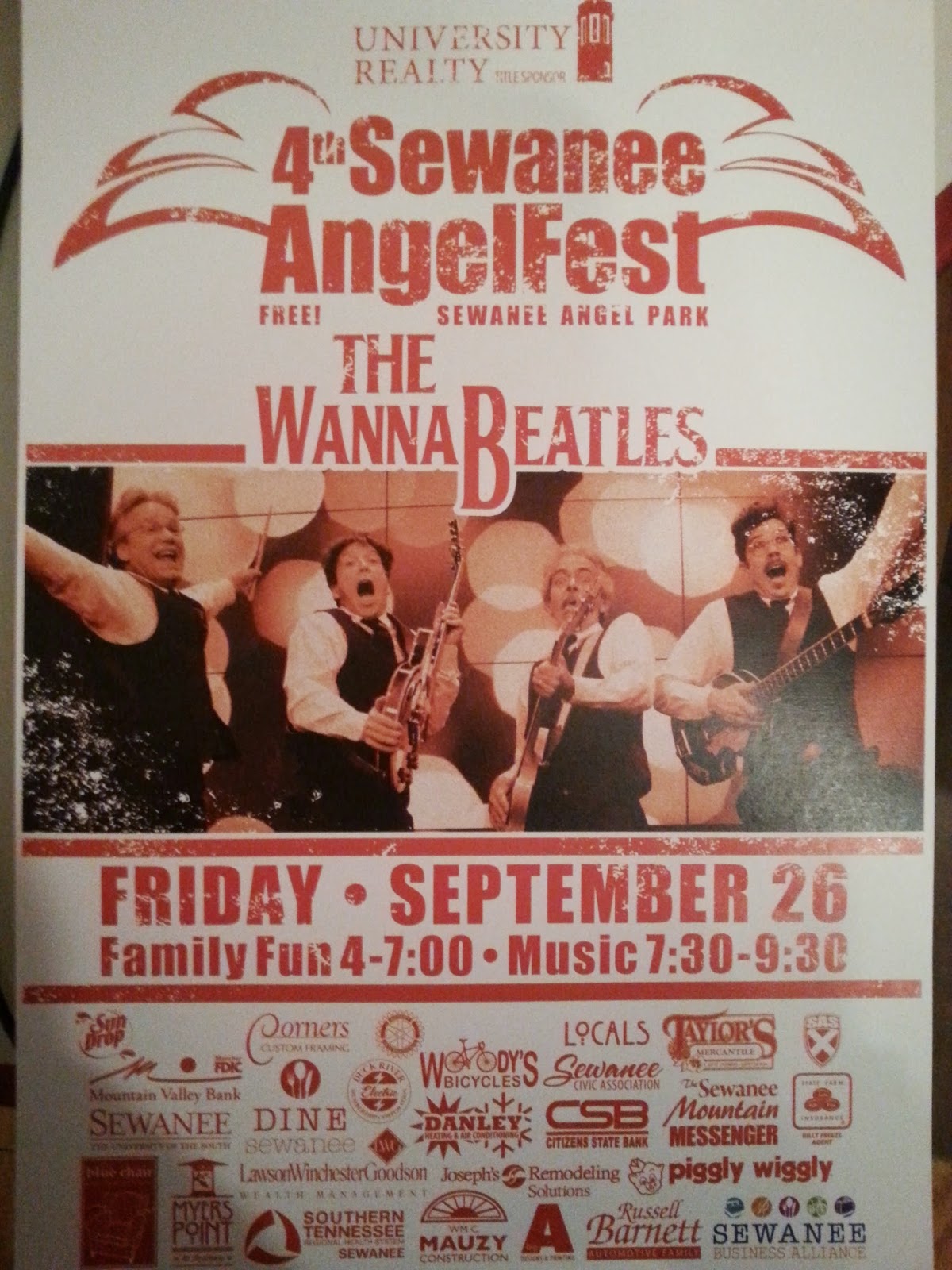 This is the poster they printed up to advertise our appearance. We saw it displayed around town, in the windows of restaurants and galleries across the street from the park. 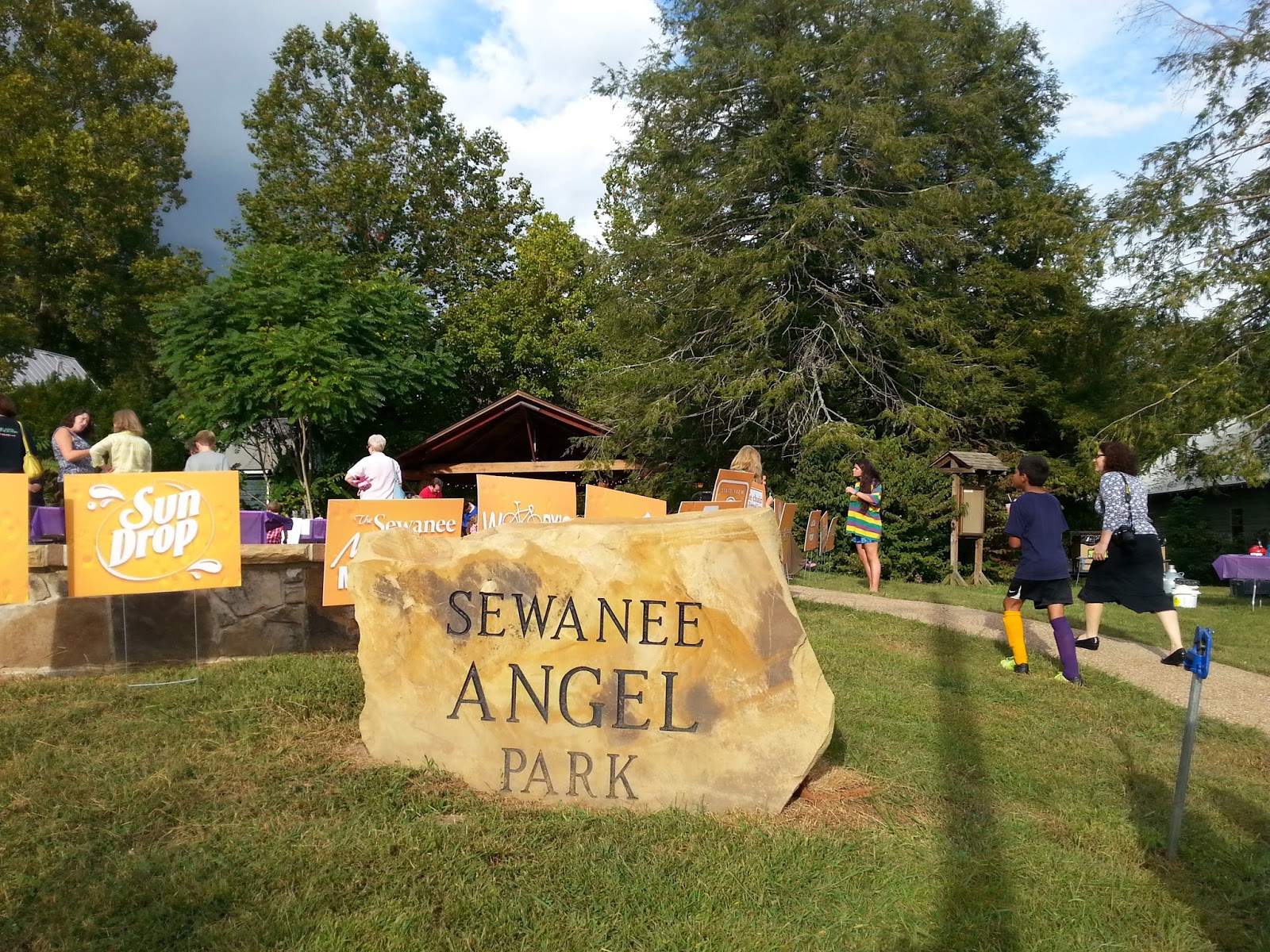 The Angel Fest is a community event that connects many people, businesses, and activities. An animal shelter was featured among the booths on the street. 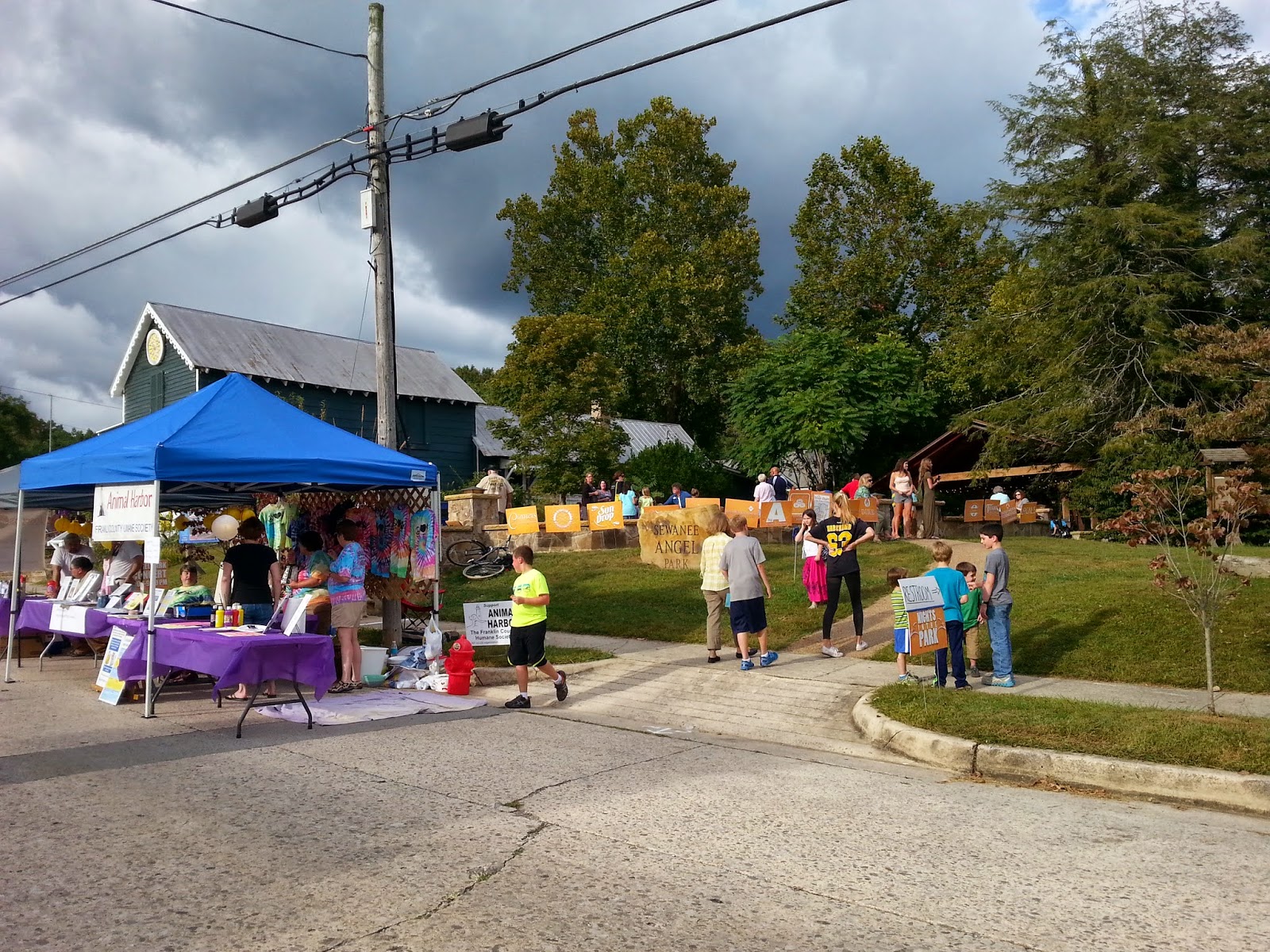 The music stage is small but charming, with large beams forming a large A-shaped shelter over a geometric slab. 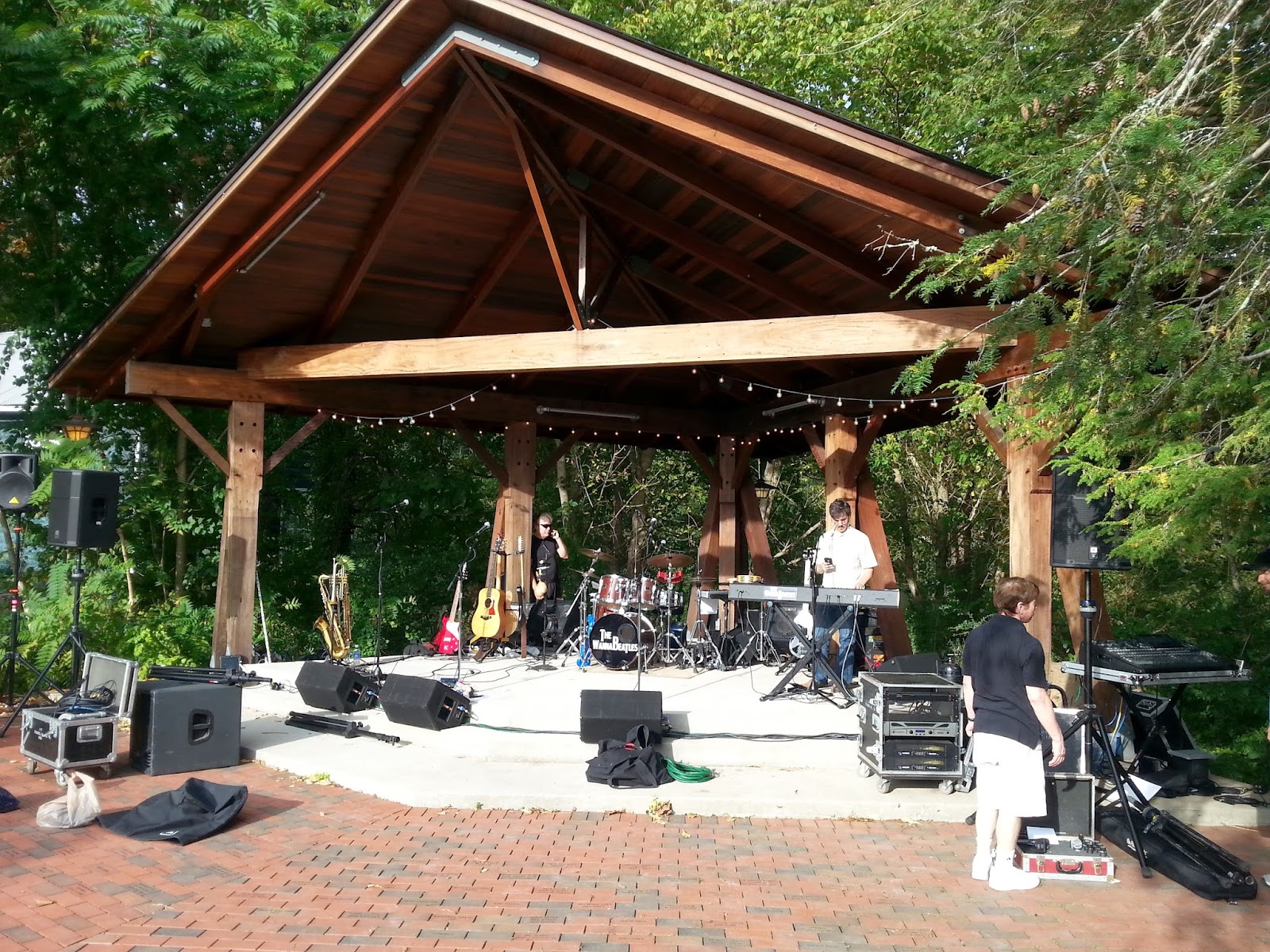 We had Ricky Armentrout running sound for us, an old friend from Puckett's. 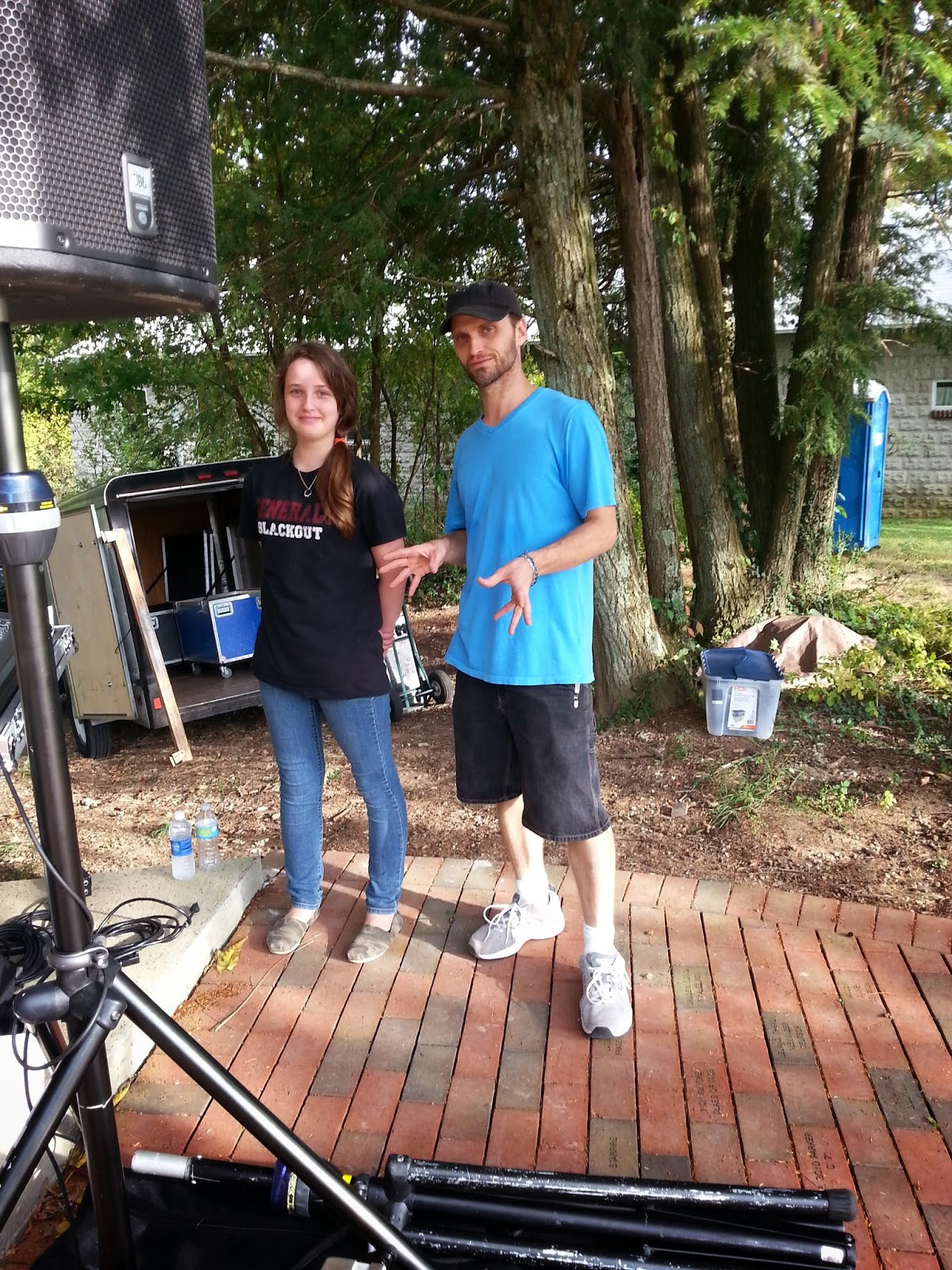 Ricky brought his daughter Vera to help out. We can remember when she was about 6 years old, back when Ricky did our sound at Puckett's Grocery in Lieper's Fork. 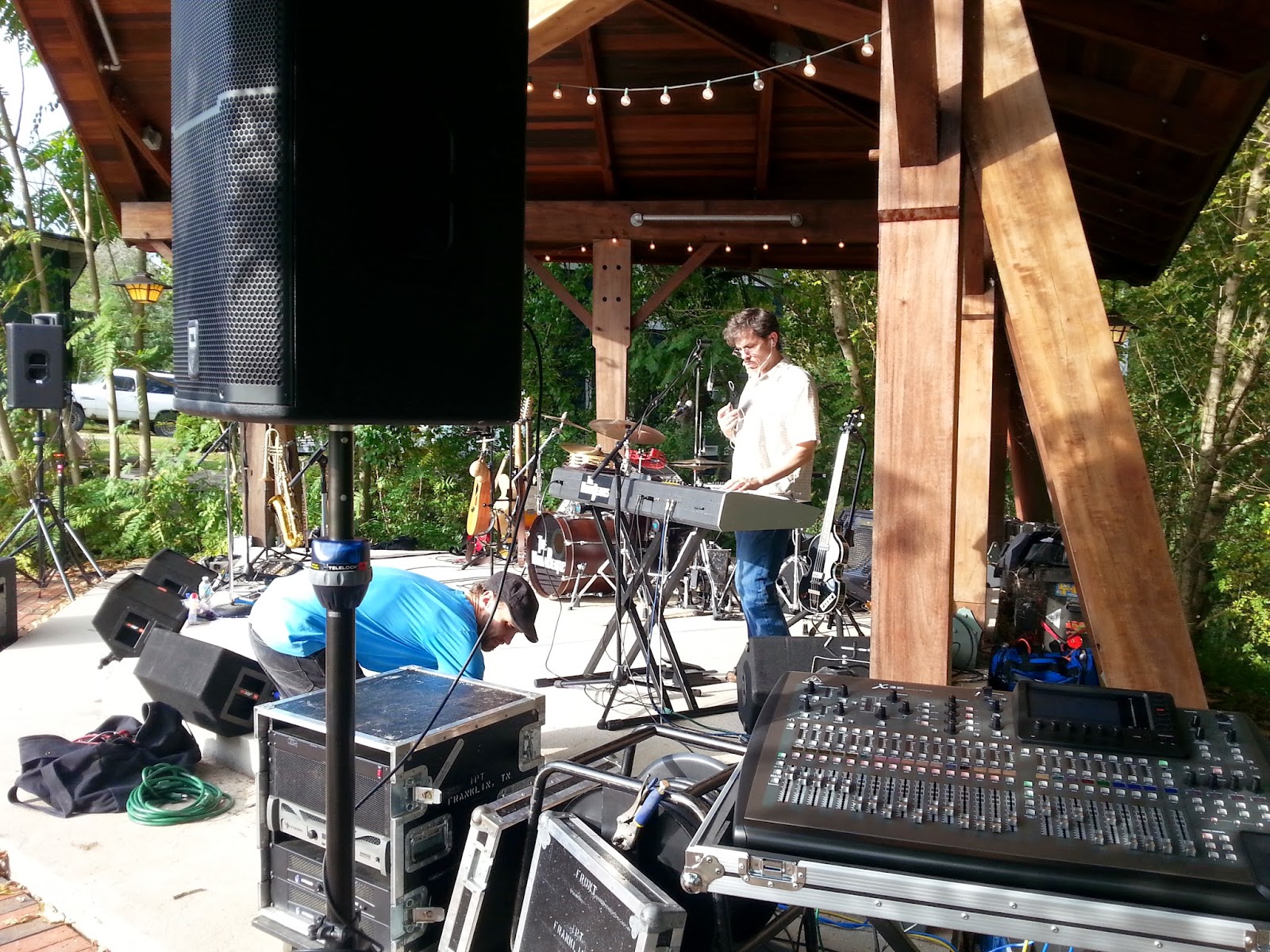 A view of Nathan from sound board 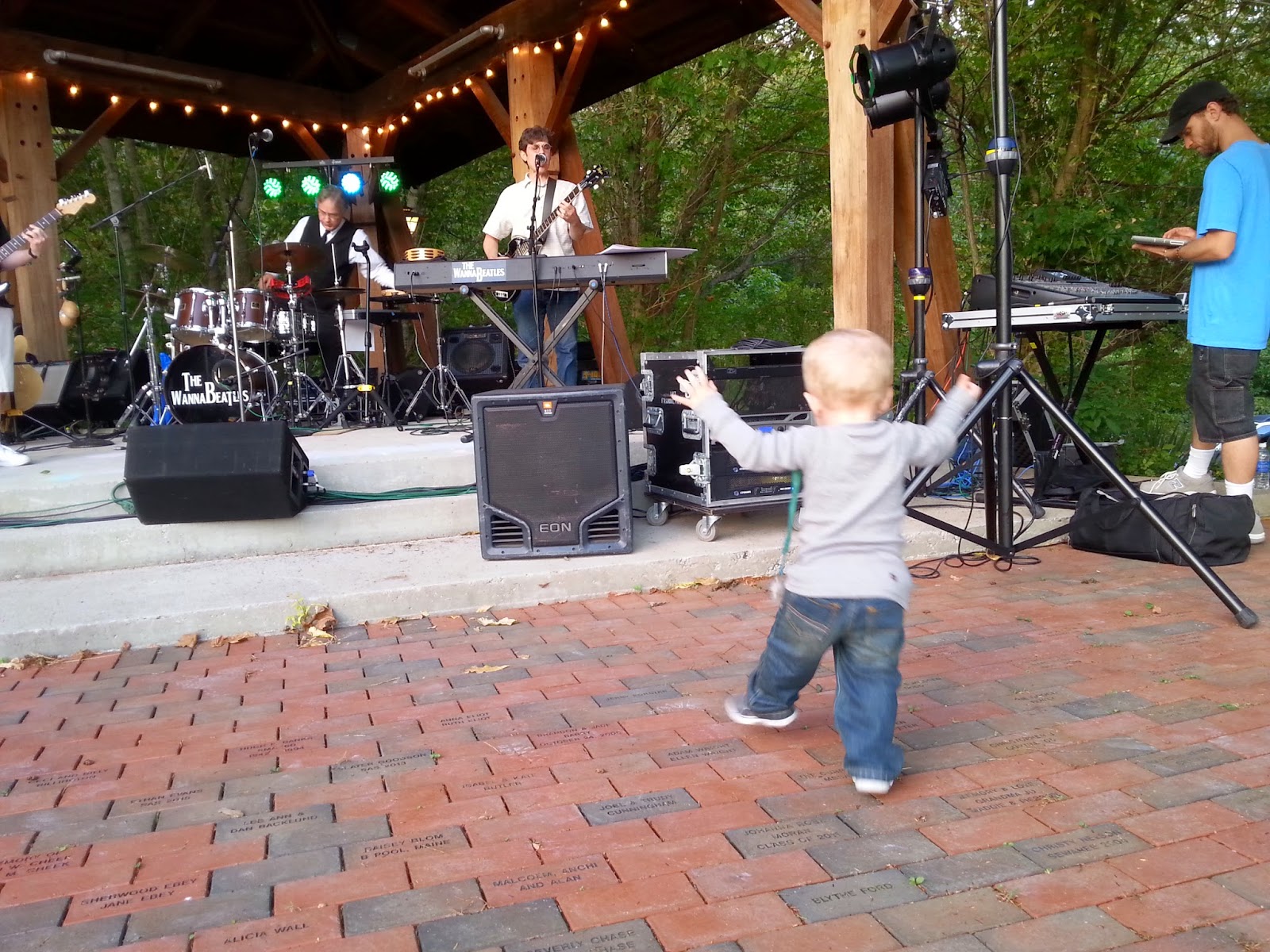 It was great to see a dancing toddler at our soundcheck 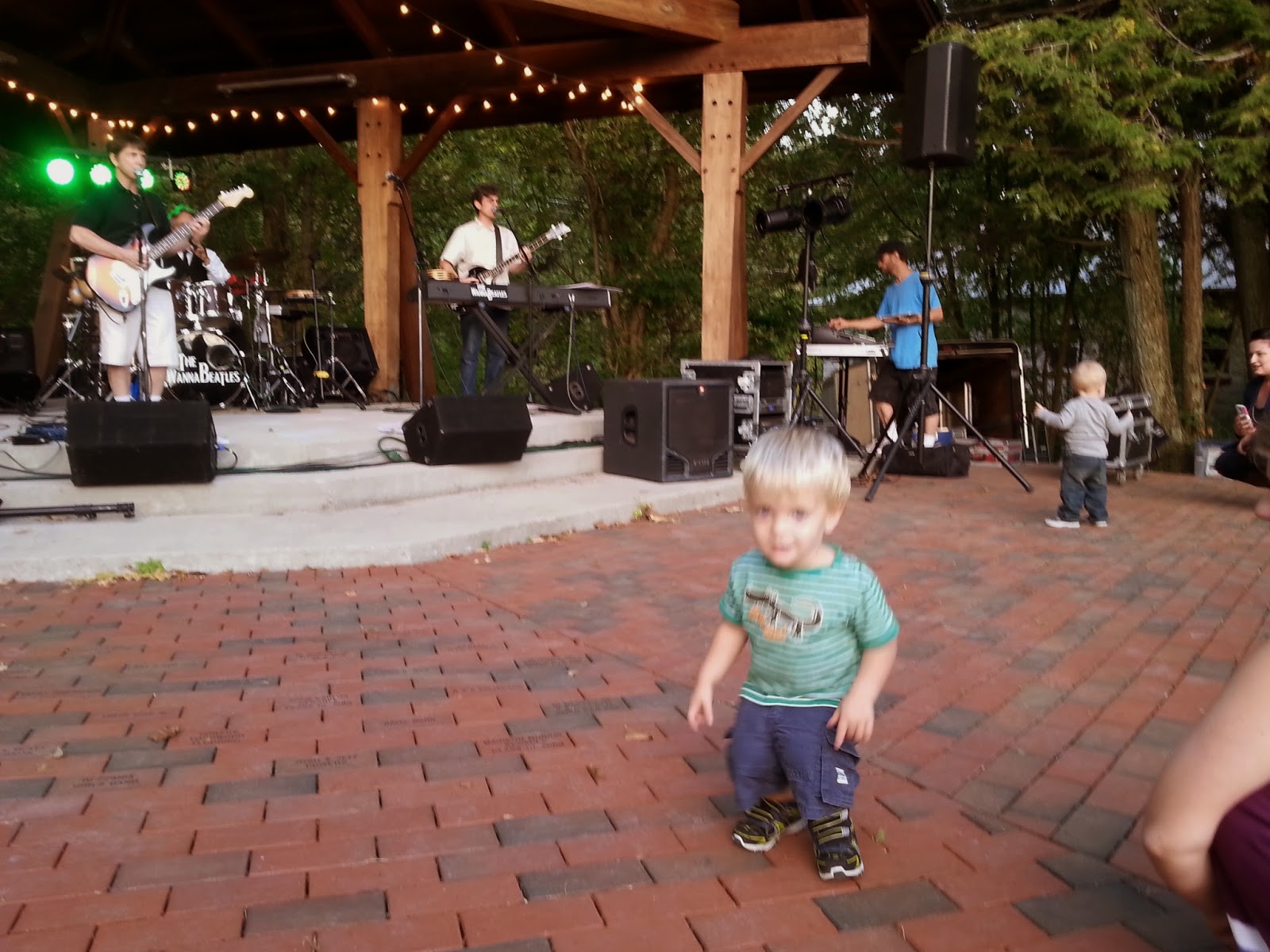 And here's another one getting into the music

The grassy area in front of the stage was used for the first annual Canine Musical Sit, which is like musical chairs for dogs. Each dog walks with his owner around the circle, and when the music stops, the dogs sit. Last one to sit is eliminated, and on to the next round. 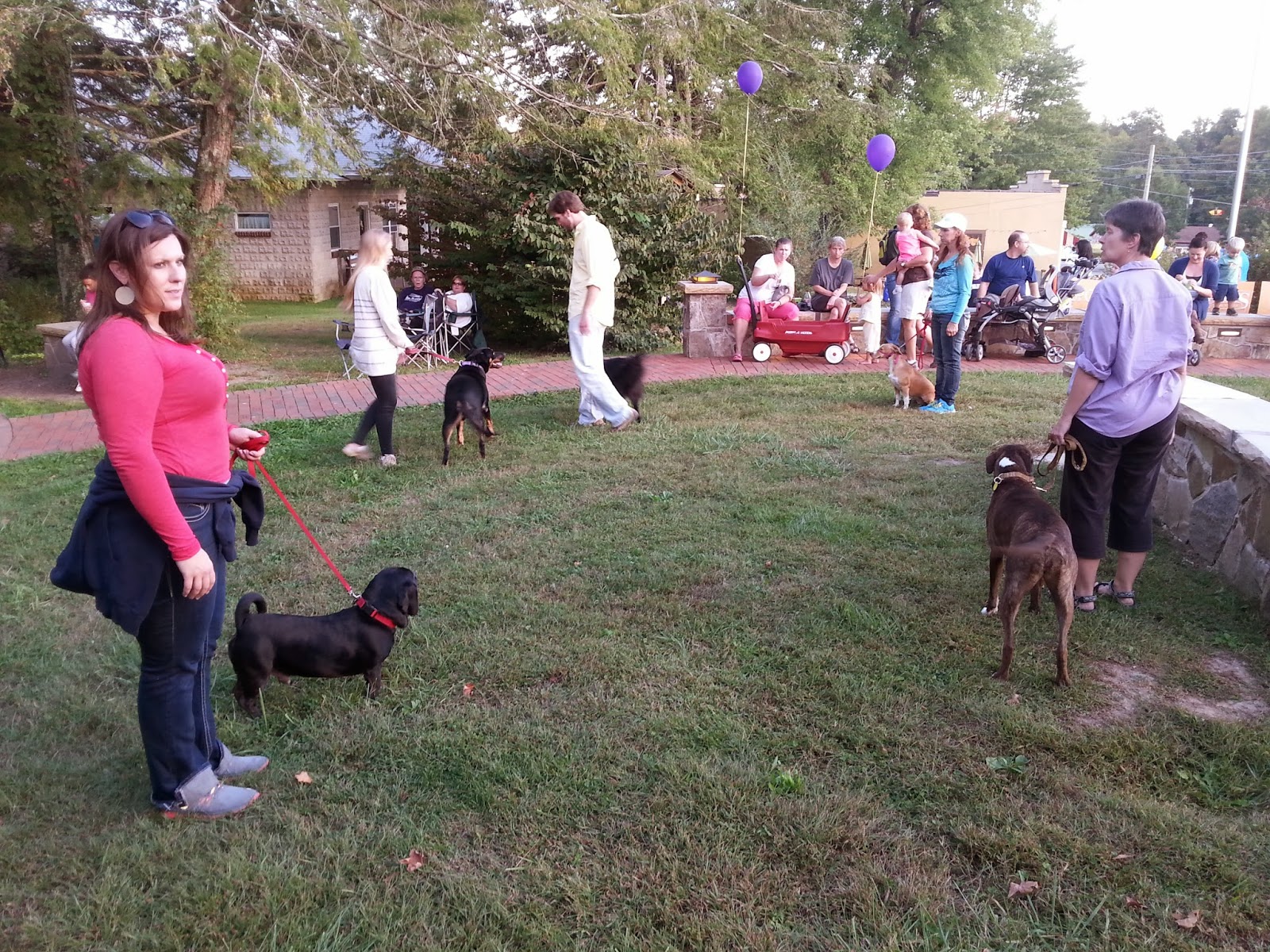 Conestants in position with their obedient dogs

The winner of the dog sit was a young girl with plenty of enthusiasm. 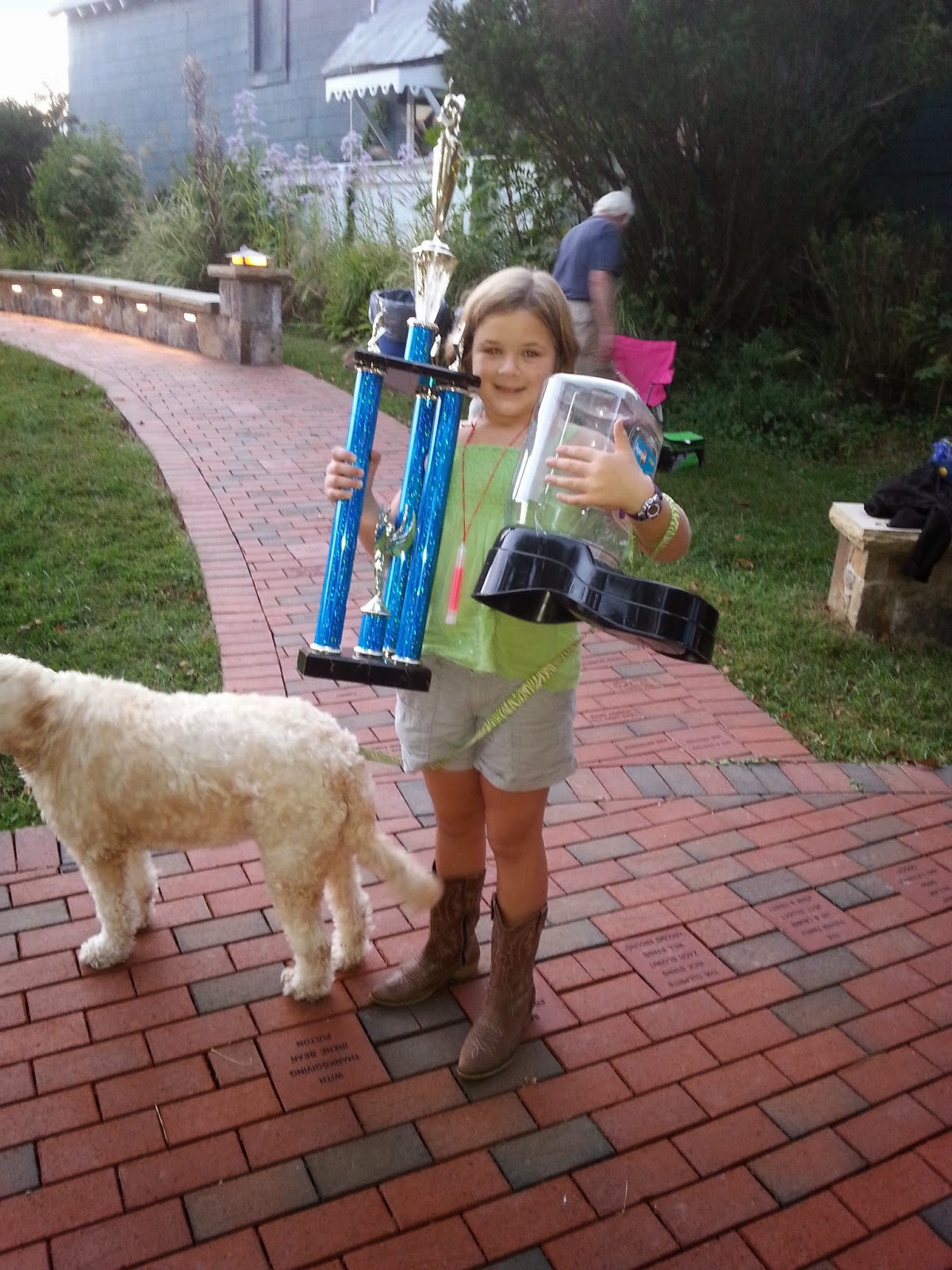 Sewanee was very hospitable to us. We were given a room to change clothes across University Avenue at Locals Gallery, where we discovered the architectural skills of John Goodson. He had remodelled the gallery, installing beautiful craftsman style woodwork, and also designed the distinctive lighting along the periphery of the Angel Park.

Right next door to Locals gallery was The Blue Chair Cafe & Tavern, where we were treated to a variety of craft beers and fine local burgers. Our host Jimmy offered us a taster's board of several different ales and stouts. 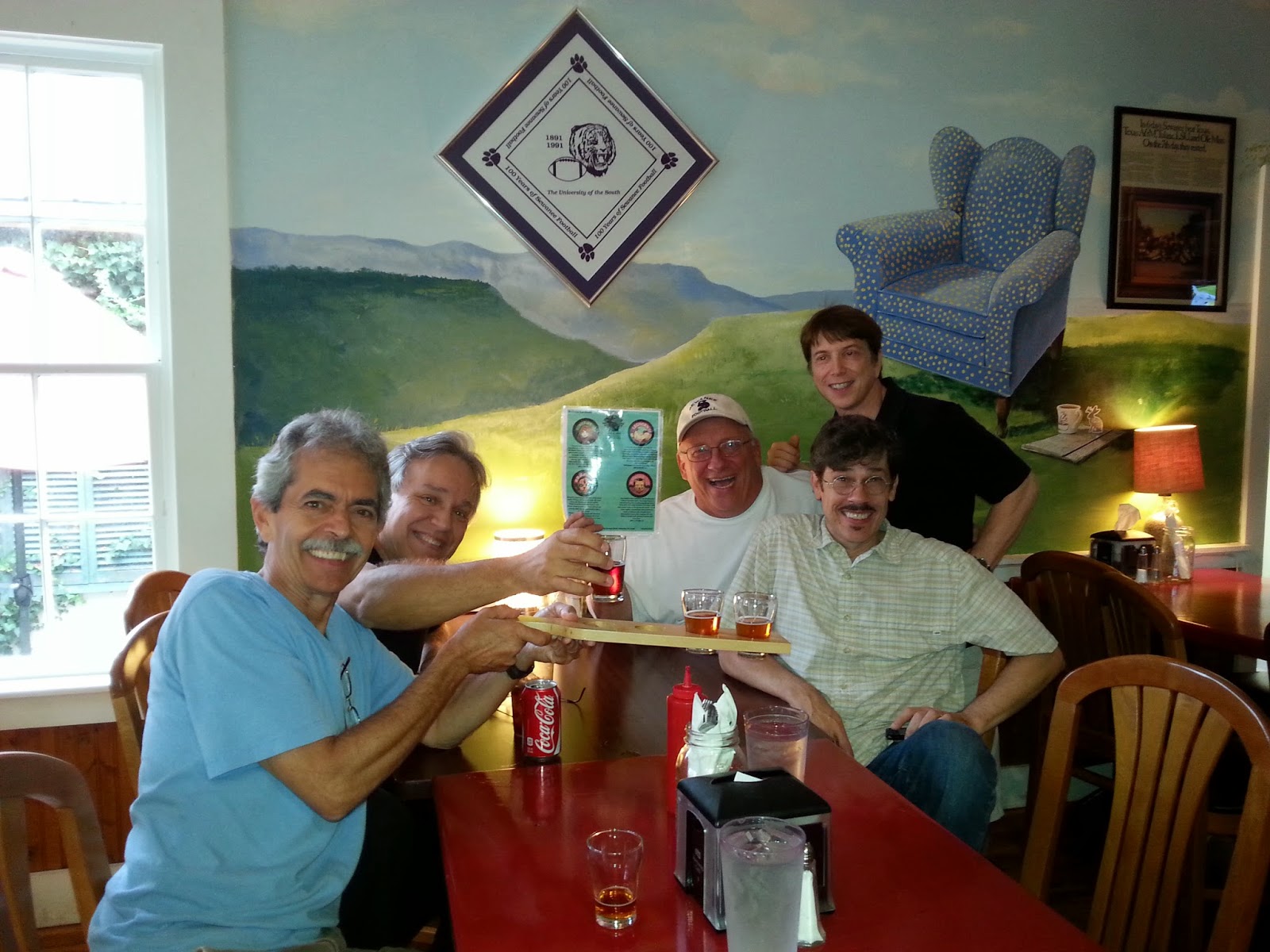 Checking out the beer variety with Jimmy at The Blue Chair

The show started at 7:30, with people sitting in folding chairs. The brick area in front of the stage gradually filled up with dancers, and the evening ended like a large fraternity party, with the crowd throbbing to the music and having a great time.

After the show, we returned to The Blue Chair, where we were treated to home made pies and ice cream. We had our picture taken with the woman who made the pies, along with her daughters. 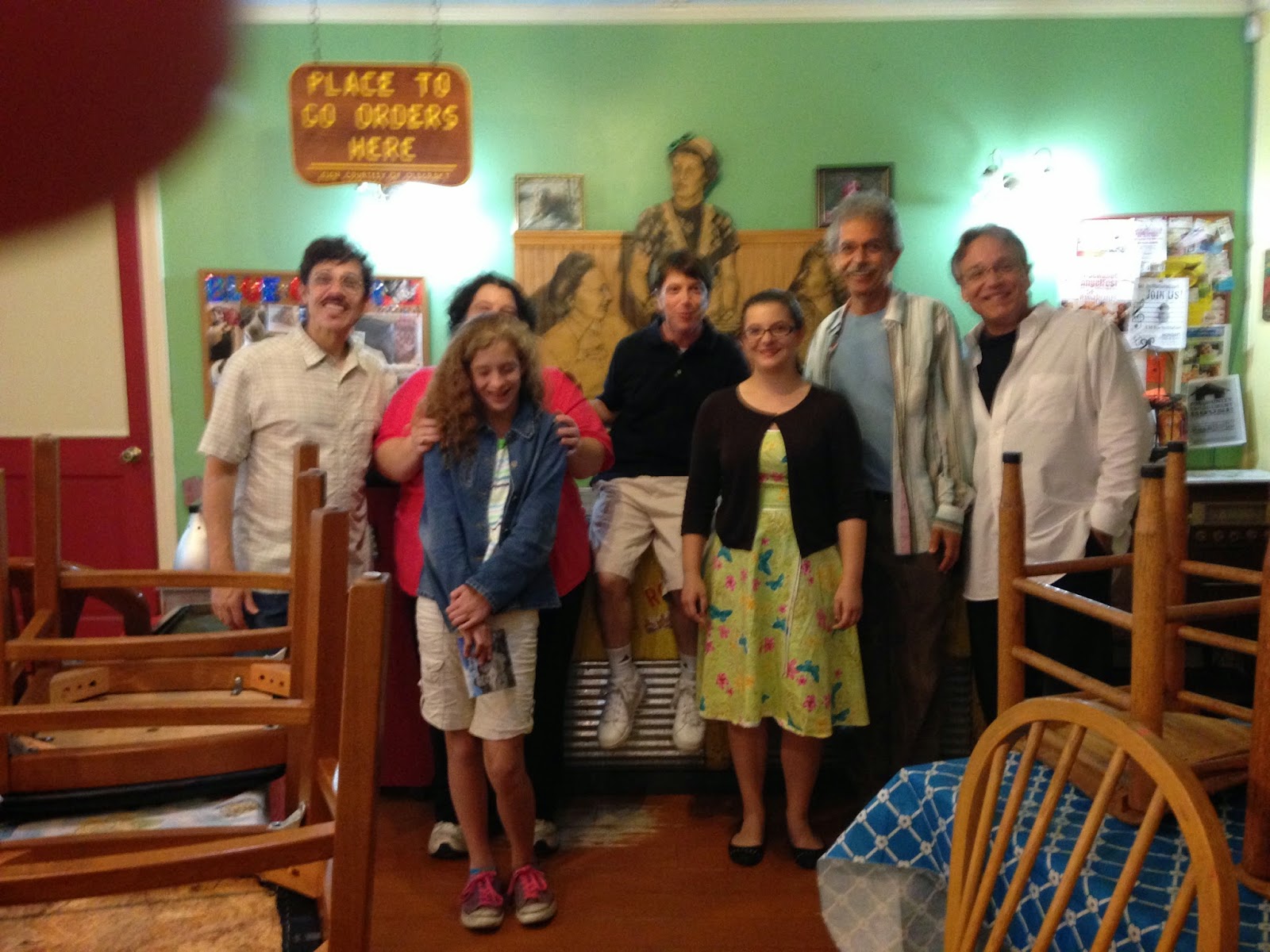 Here we are with the nice folks at The Blue Chair

Thanks Sewanee for a wonderful time!

Posted by The Wannabeatles at 4:19 PM