Those who read music may recognize a melody by Leonard Bernstein. It's one way to help The WannaBeatles remember how to pronounce a place where we'd never been before.

Berea, Kentucky is an interesting town. It's small, but loaded with energy. It's a college town (Berea College, founded in 1855 as the first interracial and coeducational college in the south), with an active local arts scene.

The historic Boone Tavern in Berea, built in 1909, has hosted such luminaties as Henry Ford and the Dalai Lama.

And now, at last, Bereans can say they've heard The WannaBeatles.

We drove up there Saturday, September 19. We were greeted by friendly staff who organized various portions of the Festival. 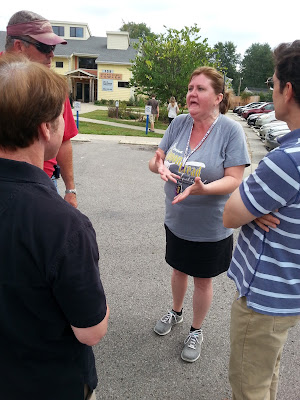 Greeted by Sandy upon arrival, getting oriented 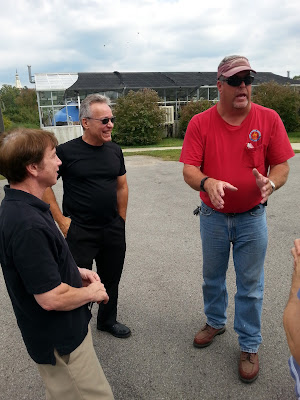 Dennis and David with Phillip, our master of ceremonies,
who allowed us to use his RV as a dressing room,
which was parked conveniently right behind the stage. 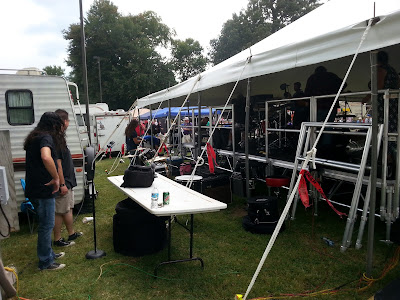 Another local guy, Chad Hembree, helped us set up our table next to the tent where Spotlight Playhouse and Acting School, his company, was promoting their upcoming season. 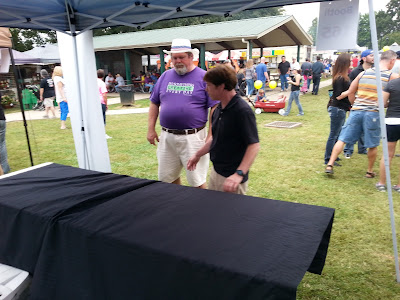 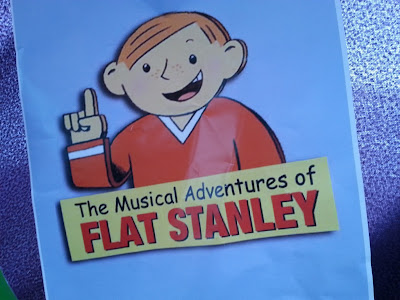 Who knew that a musical had been written
around a two dimensional cartoon character?


We met our eastern Kentucky friend Skip Benton, wearing his WannaBeatles tee shirt, who helped us at the merch table. 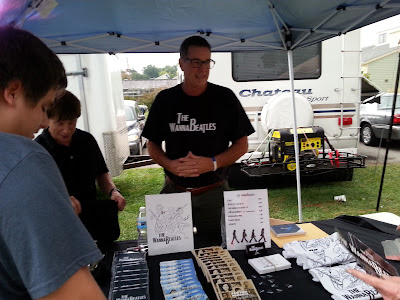 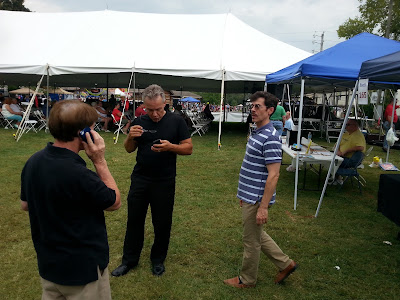 Dennis, David, and Nathan on the grounds

We wandered around the festival, tasting Spoonbread (a delicious warm bread pudding type of treat) and other festival foods. We began to suspect that "Fried" is one of the major food groups. 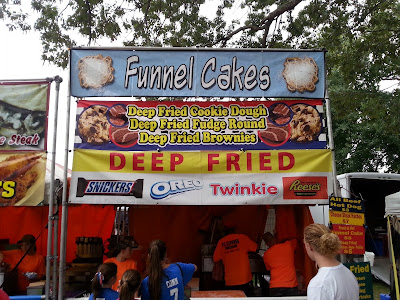 We had plenty of time before our 7:00 pm show. Other bands were on the stage, so we couldn't set up. We actually took some time to lie down and rest in the RV behind the stage while other bands played.

After the last band played, we had limited time to set up.
Then, just about 40 minutes before the show, we encountered a big problem: Bloggin' Bryan had forgotten his black pants.

The "civilian" trousers I had on were light green. If I had been wearing black jeans, it would have been a passable alternative, but this was totally unacceptable to our uniform director, WannaBeatle Dennis, who does his best to keep us looking and acting professional.

The funny part is that this goof up was a repeat of an almost identical goof up in another small town a few summers ago, when I had to drive Dennis's car to a local store to find some black pants in my size, buy them, return to the dressing room, put them on, and go onstage, all in less than twenty minutes.

This time I had over twice that much time for the emergency errand. So a local friend (Skip's wife) drove me to Wal-Mart, where I found a pair of black pants (for $12), returned to the RV, and got onstage in time for the downbeat of our show.

Not all of my equipment was in full working order when Phillip announced us. So the first song was a blur, my mind on autopilot, like a traumatized soldier in combat when time stands still - I remember fumbling with my cords and switches rather than singing and playing, aware of precious seconds ticking by as the band performed without me, as I desparately attended to technical details so that I would have the cornet up to my lips in time for the crucial part at the end of "Magical Mystery Tour."

But after that shaky opening song, we hit our stride and delivered a fine show to an appreciative crowd under that big tent.

And we had a great time.

Here's one photo from that show taken by a local fan who posted it on facebook: 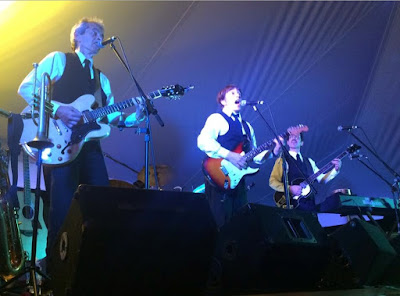 Thanks Berea, for all your hospitality, fine fried food, and one timely trip to the local Wal-Mart.


Posted by The Wannabeatles at 3:32 PM