On Saturday December 12, The WannaBeatles played a very special party.

It was for the wedding of Tama and Dan McCoy. Well, to be precise, they were married in October in California, but wanted to celebrate it among their Nashville friends in December.

Tama is a Nashvillian (native of Kentucky), previously married to musician/songwriter Timmy Tappan, who worked with WannaBeatle Dennis. Timmy died a few years ago; Dennis officiated at the memorial service on Music Row.

Tama, widowed, was not seeking another husband, but her daughter Kristen was working behind the scenes, and the result was an online introduction to Dan McCoy, a technical director at Pixar. Tama and Dan enjoyed many cross-continental phone calls; things clicked.

They celebrated their wedding aboard the USS Potomac, aka "White House on the water," originally commissioned for use by FDR. Tama shared these photos of that beautiful day. 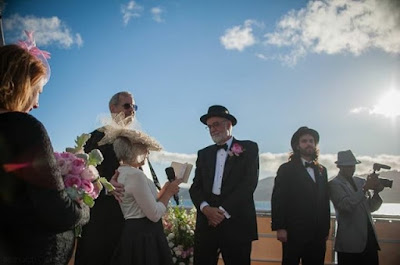 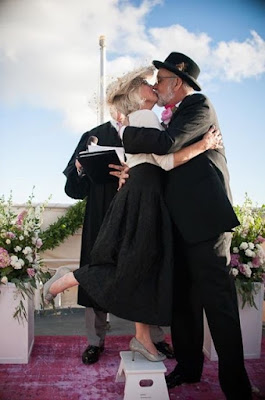 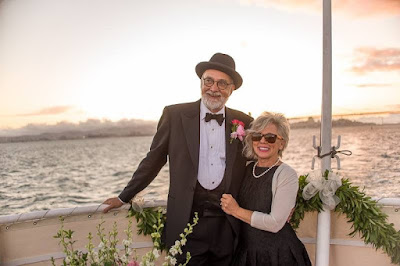 The lovely couple on their wedding day

They are a fun couple. They are also appreciators of music, and fine songs, as we discovered.

They selected historic RCA Studio A as the location. More on that later.

They asked us to play "Come Live With Me" as their special song. It's not often that we hear a request for a song we've never heard, but that's part of what made this party so special.

Until she met Dan, Tama had not heard of it either. Dan makes his living helping make Pixar movies the beautiful works of art they are, which includes finding wonderful songs that most people have not discovered yet.

"Come Live With Me" is a rare gem from the songwriting team of Felice and Boudleaux Bryant, famous as the writers of Everly Brothers hits "Bye Bye Love," "Wake Up LIttle Suzy," and "Let It Be Me," not to mention the ubiquitous (if you're in Tennessee) "Rocky Top."

"Come Live With Me" (Dennis sent us the official lead sheet) has a copyright date of 1973, which puts it late in their career. 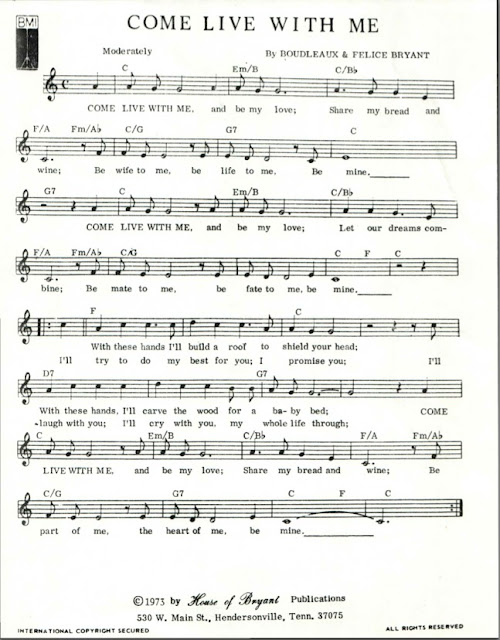 It was recorded by Roy Clark, and Ray Charles, but never widely known. Ray's version was dressed up in 2006 by Count Basie horns, an extremely rich sophisticated and bluesy version.

Dennis identified the song as something that would fit my style, asking me to sing it and rewrite the chords. I was delighted with the song.

Like any great song, it seems inevitable. It's slow and soulful, but still dignified and serious: a pure love song with spiritual overtones. It may be because Boudleaux and I are both from Georgia; I don't know. But something in that song really speaks to my soul, and I was happy to do it, and to add it to my own repertoire.

RCA Studio B is now known as Grand Victor Sound. It's got an incredible history, beginning with Chet Atkins building it, and a wide range of artists from Willie Nelson to the Beach Boys having recorded there. In 2003, it was bought by Ben Folds, who used it to record his own projects, and others, including William Shatner.  It's now open for commercial sessions.

When we arrived, the parking lot had just been paved, which meant we parked across the street. 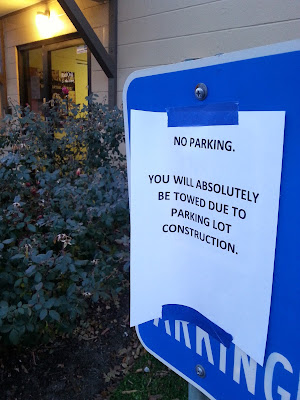 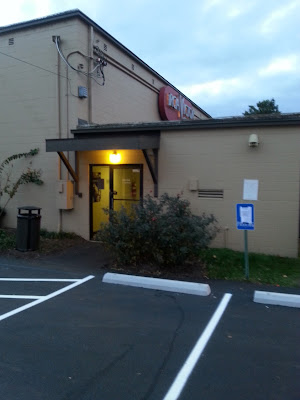 Once inside, we appreciated the room, the vibe, the antique recording gear, and the list of past clients. 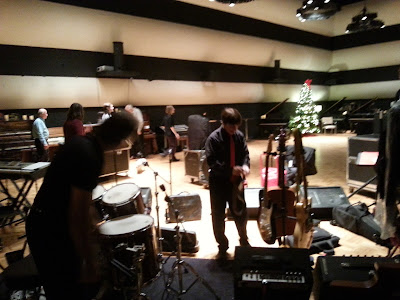 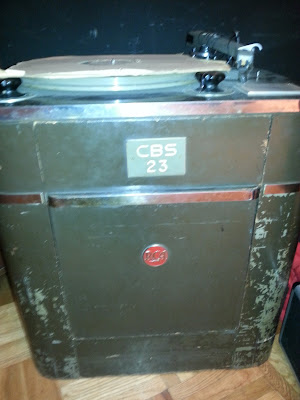 We were in awe to be in a room where The Monkees had recorded "Daydream Believer." 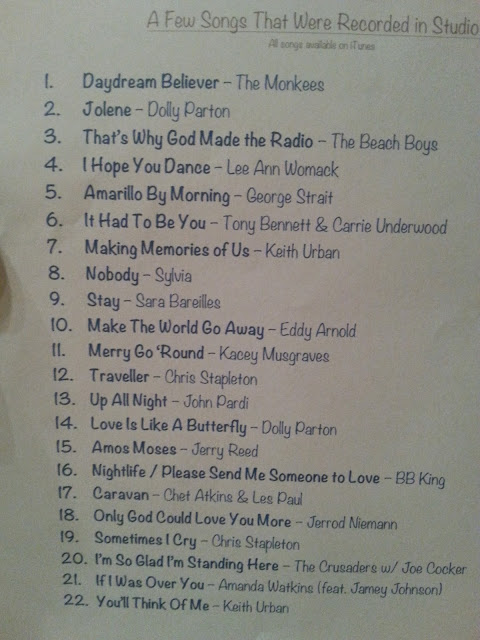 And we appreciated the work Tama did decorating the place. 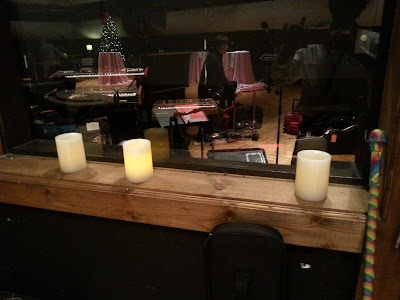 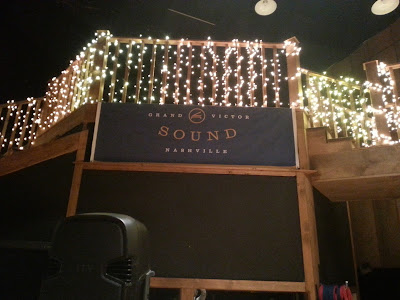 lights over the railing 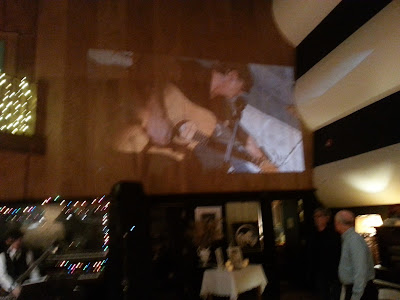 The lobby has a large photo of Chet Atkins, captured in full mid-sixties recording technology regalia. We posed under the photo to capture the moment. 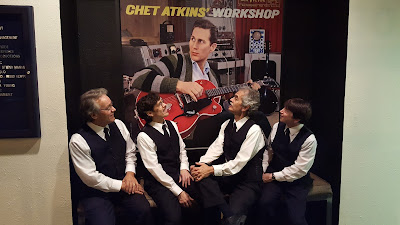 RCA has been identified by its mascot "Nipper" since its origins in the 1920's. The faithful white dog, listening to "his master's voice" is present at Grand Victor in a plastic version. 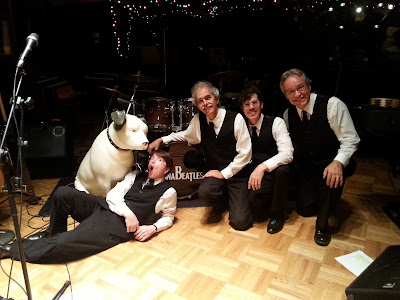 With the plastic Nipper 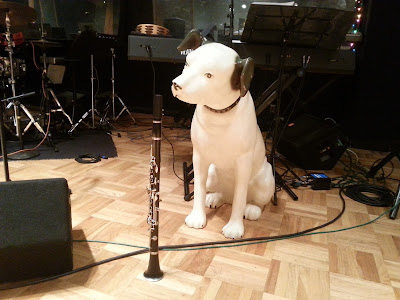 We obviously had a great time. Dennis especially enjoyed hanging with old friends. 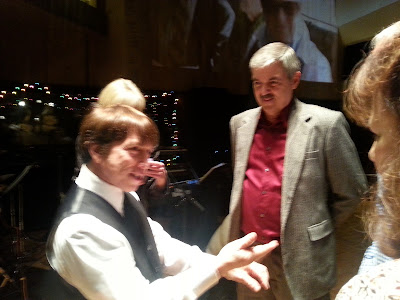 We played "Come Live With Me" as their special dance, and that went fine. Dennis had worked hard to get a set list that catered to Tama's wishes, and it paid off. We did our most romantic Beatles songs, and other classics, like Dean Martin's "Ain't That a Kick In The Head," with our semi-authentic swinging brass section.

Because so many people in the room had missed the actual wedding, Tama and Dan spoke about how they met. The story was best told by Tama's daughter Kristen, who had secretly posted her mom's photo and availability, and checked out the responding candidates privately.

When she came across Dan, she knew she's spotted a winner, and tried to find a gentle way of letting her mom know what she'd been up to. The reaction was not encouraging.

But Tama overcame her initial resistance to the idea, and soon enough, Dan, who had been captivated by what he calls her "incandescent smile," was part of her life, and everything turned out beautifully. 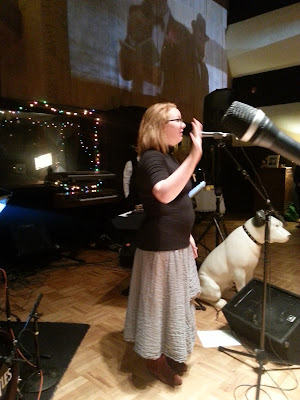 It was one unforgettable evening, and we are very grateful to Tama and Dan for including us.

Thanks also to Allen, our sound man, Pat Wilkinson the photographer, and Ben Folds for taking such care of such a beautiful musical treasure. 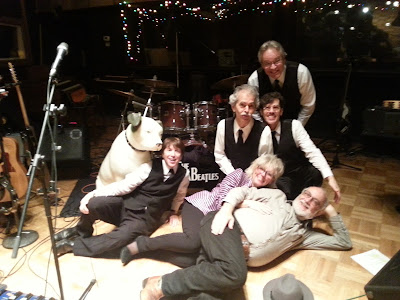 WannaBeatles with Tama and Dan
after their fabulous party