Bloggin’ Bryan is ready to stake a claim for the shortest blog in this series. There’s one photo, and not a lot to say about our experience. So, here goes.

On August 29, The WannaBeatles appeared as guests on a live radio show called Geo On The Radio, which is on Radio Free Nashville, WRFN-FM 107.1, or 103.7 FM.

It’s hosted by George Adams, a music lover who devotes two hours each week to conversations with various Nashville musical personalities. He’s been doing it for years, compiling interviews with such local notables as Victor Wooten, Jonell Mosser, and Phil Keaggy. 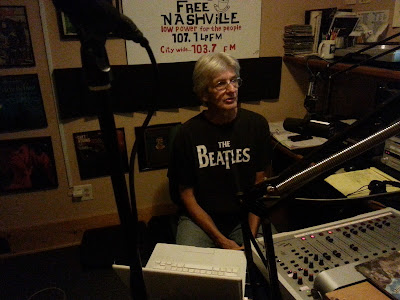 George Adams at his WRFN studio

Radio Free Nashville operates from a house in Bellevue, located back in the woods on a remote hill, with a radio tower rising above the trees. Arriving there feels like a scene from a Jack Reacher movie, a rustic outpost far from civilization, where (one can imagine) unkempt wild eyed survivalists keep a cache of semiautomatic weapons. But in reality, it’s a peaceful if scruffy little spot, where calm music enthusiasts share a cozy studio to beam their iconoclastic messages to a small but faithful few.

We showed up for our hour of conversation, bringing along copies of our albums, although Dennis had already sent George the CDs. It’s always good to have a backup; it’s the WannaBeatley Way.

We learned that George had played in various bands in the Boston area back in the 70’s. That gave us a good start, as we had some common bands, people and places to recall.

During the hour, George prompted us to tell various stories that reflected our unique identity, which coincided with specific songs that we had written and produced. One song that George picked out from our “We’re Still Rockin’” album was “Bristol Lights,” Nathan’s tribute to his small home town in Vermont.

We were delighted to be reminded of the song. We felt blessed that we had Nathan in the group, a wonderfully talented but totally modest songwriter, and that we had recorded his song, and that it was now being played on the radio. George timed it so that the last four minutes of his show consisted of “Bristol Lights.” That meant we could leave the studio, get into our cars, tune in to 103.7, and listen to ourselves playing Nathan’s beautiful song on the radio.

It’s a small thrill, but it’s worth appreciating, in this very unpredictable journey we’ve been traveling as musicians and songwriters in Music City.

And as a reminder of Nashville's small town status, we met our friend Stanley Karr coming into the studio as we were leaving. Stanley was there to do the show he started recently, devoted to piano playing pop artists, so we got to listen to him on the air after we heard "Bristol Lights." Way to go, Stanley!

Did I say too much? Is it still the shortest blog?

Posted by The Wannabeatles at 5:17 AM