The WannaBeatles are four guys, trying to do what sometimes seems impossible.

As has been pointed out, the Beatles grew from being a rock band doing their own songs into a studio band that did amazing songs that no one could ever reproduce live.

That is, until we came along. Well, actually other musicians have taken up the challenge long before us, and done a great job with it. But the point is that what the Beatles did in the late sixties couldn't be performed onstage until certain technology emerged to make it possible to reproduce some of those sounds.

So we're using what can to make it happen.

The latest of these challenges is a song Dennis suggested. Knowing we were headed to Virginia Beach later this year for a concert with a symphony orchestra, he said we should work up "I Am The Walrus."

And before we get lost in the boring details, let's relieve our eyes with some fun photos from yesterday's gig in McKenzie TN, soon to be famous as the day I forgot my pants. (the news is on our facebook page.)

McKenzie has a lovely town square, with a gazebo, lots of shade trees and park benches. The gazebo reminded us of Nathan's home town, which he described in his song "Bristol Lights" as having "a band playing Sousa on the bandstand on the green."

Here's our name on the local theater downtown, which is being restored. (we actually played on a stage in the middle of a street.) 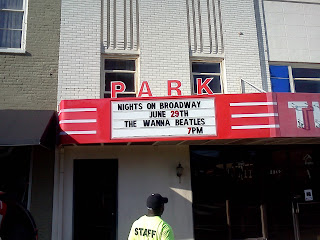 Here's the friendly welcome mat at the city hall building, where we had a nice air-conditioned room for changing clothes. 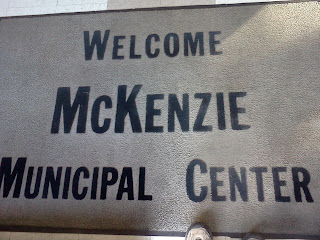 And here's a view of the new city hall building, decorated for their Freedom Fest. 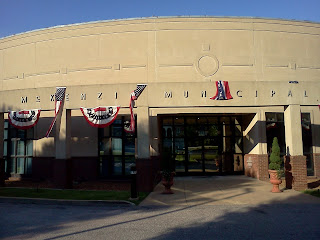 This building was the scene of the famous moment of discovery when we were getting dressed and I noticed that my pants were missing. That led to an unforgettable trip to the shopping district of McKenzie, where I found a pair of black jeans in my size for 14.99 at Fred's, and managed to buy them, put them on, and return to the stage in less than twenty minutes.

And now, back to the less exciting story of how we try to learn "I Am The Walrus."

This is one of the weirdest Beatles songs. It's very unorthodox, and virtually nonsensical. But Lennon's wacky lyrics are supported by a very creative musical track, made energetic and mysterious by George Martin's orchestrations, involving strings and horns playing some memorable lines.

We had to listen and think about how to recreate the parts. We're accustomed to being innovative, having explored possibilities like David playing a keyboard with his left hand while playing the drums, and Nathan playing three or four different parts by dividing his keyboard into sections that play different instruments, sometimes even programming different pitches to accommodate the peculiar notes of a specific phrase.

In this particular case, we found that Dennis playing bass and singing lead would liberate the greatest amount of other musical resources to cover the complex requirements of the song.

Nathan became our reliable research department, scouring the available tracks from youtube to transcribe all the horns and strings, writing them out with numbered measures so we could rehearse the different sections.

David is playing horns on the keyboard with his left hand, while playing drums with his feet and right hand. I'm playing some guitar, but mostly cornet for other horn parts.

Here's the chart Nathan made, to which I added some extra instructions for vocal parts. 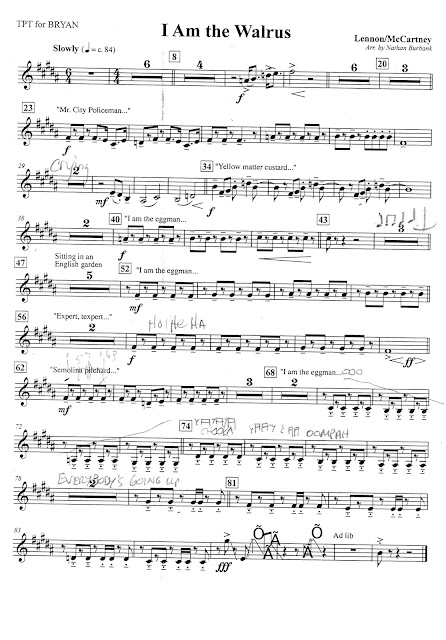 Nathan is covering the electric piano and strings, and other sound effects. David has invested in a special attachment for his drumstick that creates the sound of a steady tamborine while he plays.

It's not everything, but it's a lot.

And one day, later this summer, we will hear the entire song with a symphony orchestra. That will be the satisfying result of all this work.

But if you can't be there, I hope you hear us do it as a four piece group. If you do show up for our version of "Walrus," I hope you join in by singing along.

Once we get it ready. There's still work to do.

Posted by The Wannabeatles at 9:56 PM