We had one full day of checking all the mixes. Gary had already spent several days giving the songs his full attention, but this was our chance to give the songs any extra tweaks.

This was Tuesday, starting at 9:00 am. Dennis was in Florida, but he gave us access to his studio all day. He stayed in touch with his cell phone and computer, checking out mixes over the phone, and making sure we were on schedule.

We had to finish the mixes that night, because Gary was already booked the next day for another project, and the final mixes were due to be delivered to the mastering studio, which is Doug Wayne of Mastermind.

And it took all day to listen to every song and give it the attention it deserves. We spent almost three hours on the first one, "Let's Run Away," adding some cinematic touches - like the sounds of ocean waves on the shore, mixed with rain forest bird calls. What a way to start an album.

We caught our stride and spent much less time on succeeding mixes. Nathan went out to grab us some sandwiches for lunch while we stayed at it. We didn't finish till 9:30 pm. And then Nathan drove over to Doug's studio to deliver the final mixes.

Here are some photos Nathan took of Gary, David and me in the studio. You can tell it was a nice day. You may also see again why we feel blessed to be working with Dennis. 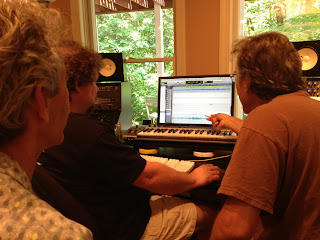 You'll notice David sits up close, beside Gary. David seems to take the greatest interest in the technical aspects of the process. Looking back over the years that have led up to this moment, it seems that David has been the main cheerleader for moving us ahead. He's the one who pointed out that doing our own songs was, in fact, a way of honoring the Beatles, and what they accomplished. He's the one who has pushed me to play better guitar solos and try out new ideas.

And for those who may be curious, David - our drummer, and best singer, already playing bass and keyboard on several songs - also played some guitar on this CD. You can hear his cool sonic additions on the verses of "Let's Run Away."

And listening to these mixes makes me realize that my own musical contributions are better because of the interaction with the other members of the group, especially with David. In a way, he's a "guitar producer," encouraging sounds, parts, and energy that I would never come up with on my own. 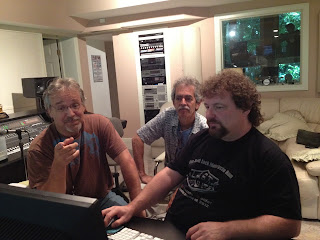 Doug Wayne finished the mastering within a few hours the next morning. He made a reference CD for us to check out. Nathan suggested we meet at my house to listen. So David and Nathan both came over here.

We were pretty happy with the sound of it. It was good to have a day to rest from the mixing, to come back with fresh ears. But even more, it was a chance to realize that we were listening to a major accomplishment for us - something of a dream come true. We had put a lot of work into it, and now we could hear the results of our work, knowing we had tried our best and used the best people we could find to create a product we could be proud of.

As it turned out, Nathan had received the final proofs of the CD cover artwork, and brought that over here on the same day. So we had the elements of our precious baby in hand - the physical cover in full color and the final audio version of the album, all of it ready to be assembled, getting our final approval.

FIX IT IN THE MIX

Technically, we thought we heard a discrepancy in the bass level on one song. It seemed that the bass on  "License to Spy" was not as loud as the bass level on the other songs. We called Doug about that issue, and he said that, yes, he could increase the low frequency portion of that song, but that it's much better for the mastering process to make such changes at the mixing stage. Which would mean going back to Gary, and having him increase the bass on that one song, then taking that remix back to Doug to remaster that one song.

Gary was unavailable for several days. Dennis, on the phone from Florida, reminded us of how many days would be lost because of the chain of events that would be required for the delay.

Was it worth it? This was the sort of choice we were getting used to: how to meet our self-imposed deadline while still wanting to add or change things we thought could be better. Dennis had already given us the lecture about perfectionism being a deceptive influence - a way to delay things indefinitely. Sometimes you had to accept things the way they are and move ahead.

This was one of those things. The problem we heard was not major. It was the sort of thing that might not be noticed at all. It was even the sort of problem that once you "fix" it, you might decide you liked it better before. So we endured the discipline of restraining our impulses in order to accomplish the greater good - or something like that.

And we made extra copies of the CD to listen in our cars.

And then we got even more excited. Listening to the CD in my car gave me a renewed appreciation for all the energy that went into it. One song in particular really explodes with energy -  "We're Still Rockin'." It starts hot and never lets up. It's loaded with vitality. When the chorus arrives, it's a new key altogether, with strong harmony vocals, and then rockin' guitar fills on top of that. It's the song that keeps on giving, just when you thought it couldn't be any more exciting. I had to call up David to thank him for all he put into it, because it seems like the song that really delivers an unmistakeable eruption of energy. We captured something that cannot be denied.

Our lives are tethered to an appreciation for how music communicates excitement. We know how records like "Rock Around The Clock," and "Hound Dog" and "I Want to Hold Your Hand" and "She Loves You" excited entire generations around the world. We enjoy performing Beatle songs for people who love them as much as we do. But now, with this album, with this song in particular (it's track number 7 on the CD), we've created a song with a comparable level of energy that will show people that we have something special. It gives us hope, and joy.

We played a gig last Sunday night, and announced to the audience that we have a new CD coming out. We referred to it as a dream come true, because for us it's been many years of wanting to do something like this. Working together as WannaBeatles, and now releasing an album of our own songs is a way for four guys to do something creative that we were built to do, something that only can happen when everything comes together in just the right way.

You'll have a chance to see it and hear it soon enough. It's out of our hands now. We'll have the finished product within three weeks, and we'll have them at our shows, and available online. Of course, when you see us live, we can autograph your copy of the CD, and we're happy to do it. But don't let that stop you from enjoying the music and spreading the word.

Posted by The Wannabeatles at 5:31 AM