The Album Is Out!

It's been a busy week in WannaBeatle World.

We received the physical CDs from DiskMakers, and they're beautiful (if we do say so ourselves.) We feel like proud papa's at the maternity ward, ready to pass out cigars. For those who may have missed it, here's the beautiful cover: 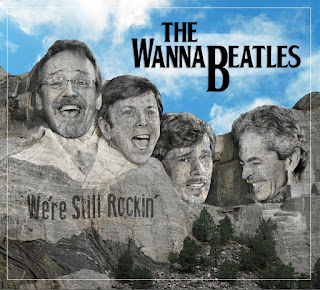 Thursday was our rehearsal, but we also spent hours installing the software that would allow people to listen to, order, and pay for the album from our website. Hey, we're a business now, and this is part of what we do. Fortunately David has an appetite for engaging technology, and Dennis can see the value of what we need, so they make a good team talking to tech support as we wade through the details.

Friday we had a live radio appearance on Hippie Radio 94.5. That was our first chance to hear any of our new songs on the radio, which is a special thrill. Our host was DJ Chris Lucky. We sang acoustic versions of "We're Still Rockin'" and "Louise,"  in the control room. Chris also played tracks from our CD, "In '63" and "We're Still Rockin'" while we were there.

We noticed something unusual as the second song played: during the whistle solo of  "We're Still Rockin'," the CD skipped - it repeated a section, and then started looping, as if it were a vinyl record with the needle stuck.

It was a little bit horrifying, to experience a malfunction of our fresh new supply of CDs, on a live radio appearance. We wondered if that meant the entire batch contained an error. It was also exciting, as we watched Chris calmly fade from the weird repeating section to a station ID, and we joked about the psychedelic nature of the record, as if we had intended such an artsy effect.

Friday night we played at the new Puckett's restaurant in Columbia. Since we've played regularly at the Franklin Puckett's, we'd heard about the newest addition to the family, but not seen it before.

It's beautiful. It's located right on the town square, alongside other businesses nestled together facing the county courthouse. It makes for a very attractive center of town. 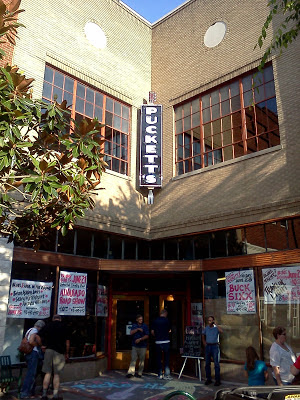 If you look close, you'll notice their new sign combines a guitar headstock with a fork at the other end, making the statement that food and music are equally important. That seems like a good summary of the Puckett's philosophy.

There are lots of posters and antique signs to contribute to the atmosphere. Here's one that's probably unique to certain Southern towns. 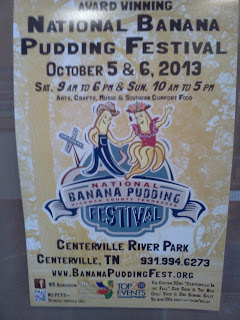 Among the decorations are reminders of Columbia's unique history as the home of Mule Days. Here's a banner that's even older than all of the WannaBeatles. 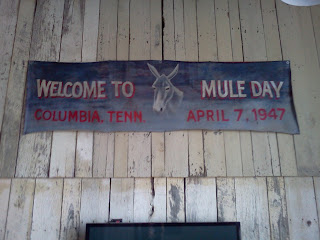 This new Puckett's is twice the size of the one in Franklin, and very charming. We heard we'd sold out, with 180 seats all occupied. Our crowd was very enthusiastic, and asked for two and a half encores.

They bought a bunch of copies of our new CD, and we put our autographs on a few of them. It's an exciting stage for us, putting our signatures on pictures that only a few weeks ago were an idea that we were sending to a graphic artist in Las Vegas, as he put together our Mt. Rushmore cover.

And the songs have already been on the air! And you can buy the album at our website! We'd be very happy to see you there.

And of course, we hope hearing the music makes you happy. That would be the best of all worlds.

Posted by The Wannabeatles at 9:06 PM