Yesterday we rehearsed with Rachel Hale, who has been on American Idol. We watched her TV performance on youtube. She did a great bluesy number, then received compliments from judges like Keith Urban and Mariah Carey.

Here's the link to the "sudden death round" of American Idol, with Rachel doing a great version of "Nothing But The Water:" http://youtu.be/o_FTHbuJtnk

She's our special guest for the upcoming show at Crockett Park on June 23. She's doing three songs with us: "Get Back" (Tina Turner style), "Blackbird," and a rocking' version of "I Saw Him Standing There," based on Maggie Bell's rendition from the soundtrack to "Across The Universe," the 2007 film based on Beatles songs.

She really rocks. As soon as she opened her mouth, we felt a jolt of energy. We knew we had something - a playing situation that would keep us on our toes. "Get Back," for example, sounds a lot different the way Tina Turner does it, even though it's basically the same tempo and same key as the Beatles. As Nathan said as we launched into it, "more like Rolling Stones than Beatles." 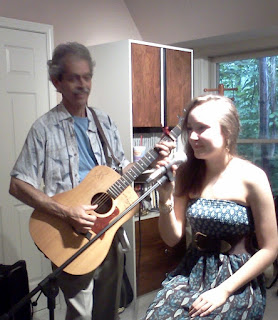 "I Saw Him Standing There" is very different from the Beatles song. It starts with a bluesy guitar licks, uses strong rhythmic accents, and features lots of gospel-flavored piano. We're really looking forward to performing with her at Crockett on June 23. 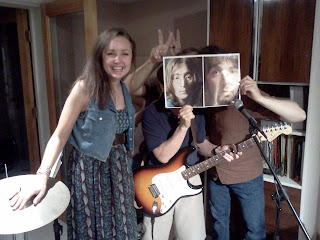 Rachel with three goofy guys posing as John and Paul

On a different topic, we received a nice signed photo from Betty White, after letting her manager know about our song and video "Oh Betty! (The Betty White Song)." She sent us a photo of her with her very nice dog, whose name is, apparently, Pontiac. 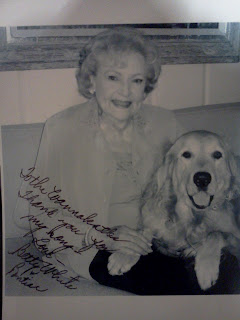 Betty White (and her dog Pontiac) say thanks to the WannaBeatles

"Oh Betty!" is on our new album, and in case you haven't seen it, you can still view the silly video on youtube by clicking on this link: http://youtu.be/d_9TG-qwgKU


Life is never dull with the WannaBeatles. Come to Crockett Park on June 23, enjoy a picnic on the lawn, see our new album, and hear Rachel Hale, all for free.

Posted by The Wannabeatles at 11:49 AM