On Friday May 23, the first day of Memorial Day weekend, we gathered at Nathan's and loaded up the WannaVan and UHaul trailer and left for a gig in a place called Egyptian Hills Resort. It was a beautiful sunny day for a drive, and an adventure to a place we'd never been before.

It was good to get back on the road again. It brings back memories of all the gigs we did last summer.  We already have more gigs lined up this year, so it feels like we're on a roll.

We've learned the ropes, how to pack all our gear in the trailer, how to check each other to remember to lock the trailer, how to charge our cell phones while on the road, what snacks to bring along. So we feel like experienced road warriors, and a bright sunny day in May was a good time to remind us of how much we enjoy doing what we do.

One indicator of fresh creativity came with Nathan's announcement that his wife Sally had just published her first book. The physical copies had just arrived at their house, and Nathan handed out three to the rest of us in the van, telling us they were not being given to us, but that we could read them while on the trip.

Sally's book is called "Patients I Will Never Forget." It's a collection of anecdotes from her years as a doctor. She's a talented writer, with a distinct comic flair. I started reading and found it so enjoyable I had to pause to read sections out loud to the other guys. 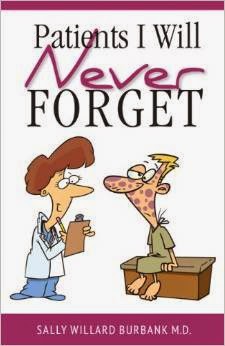 Egyptian Hills Resort sounds like the name of a casino. I imagined a high rise hotel with elaborate gambling facilities. But what we found instead was a very small, rustic, quiet little summer camp getaway way out in the woods.

We left the interstate and travelled along small roads, using the GPS for directions. We began to feel lost, until we encountered the signs: large hand-carved wooden statues, bearing the name "Egyptian Hills Resort." 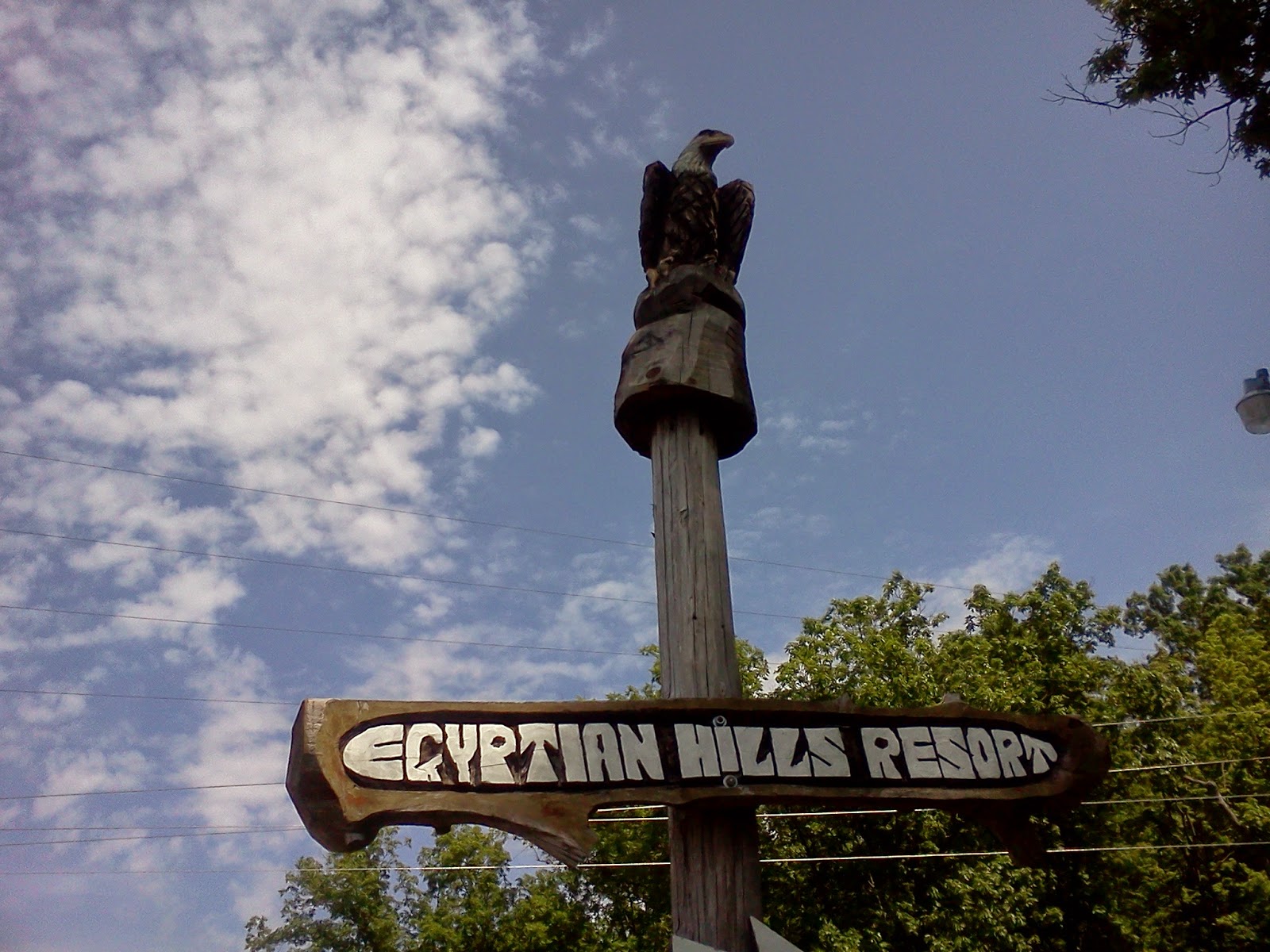 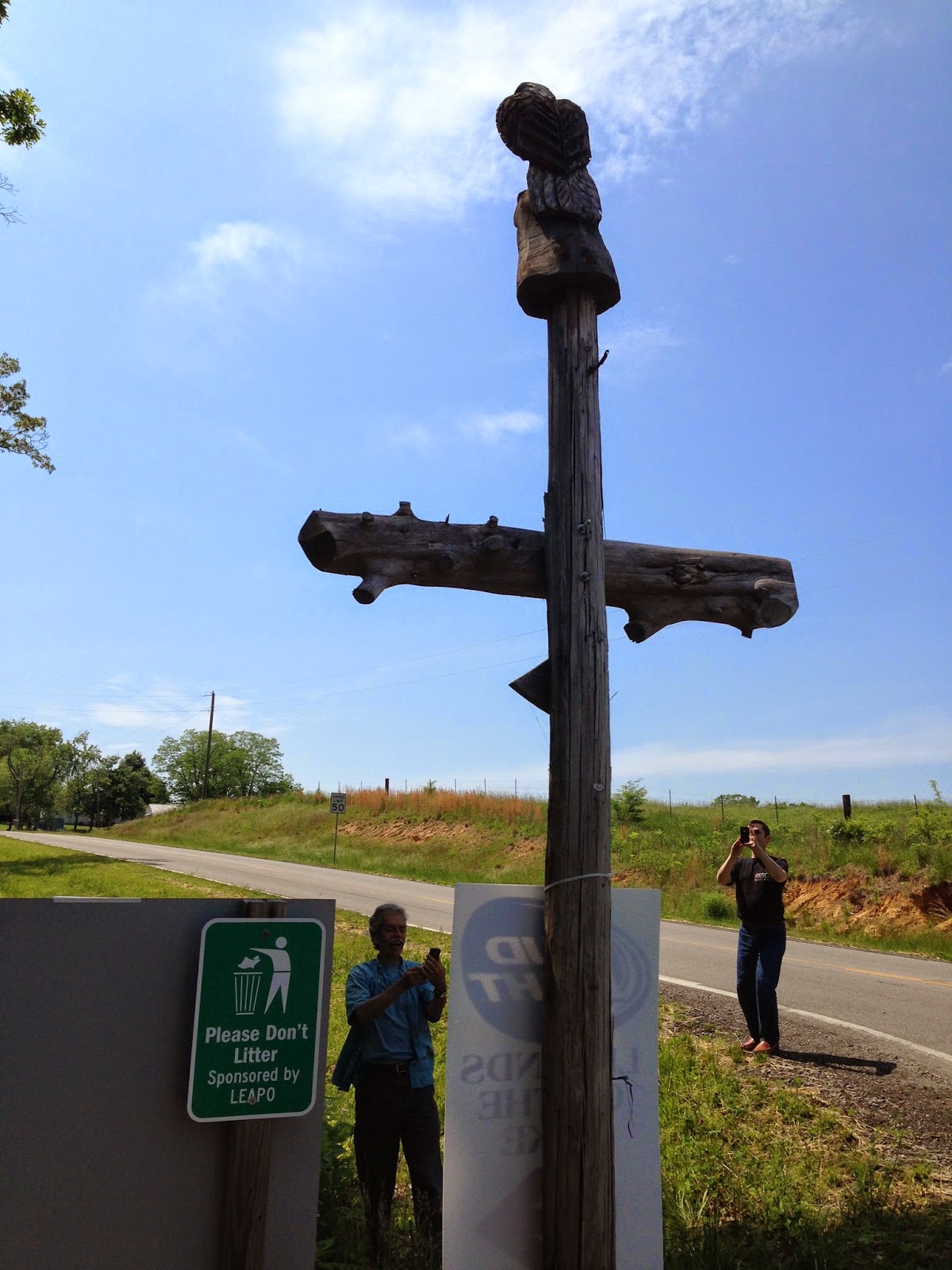 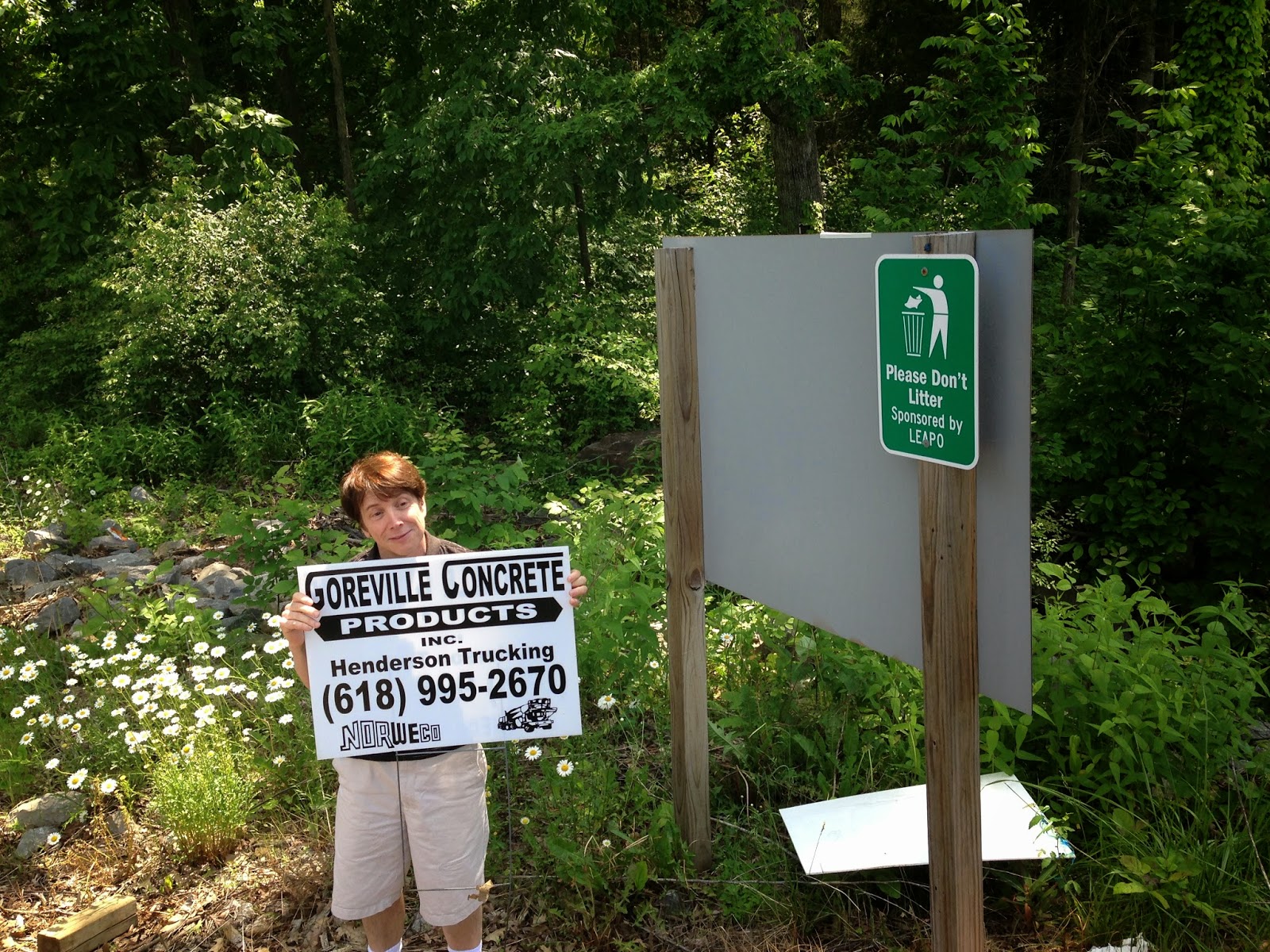 And another version of the sign, including an eagle's nest 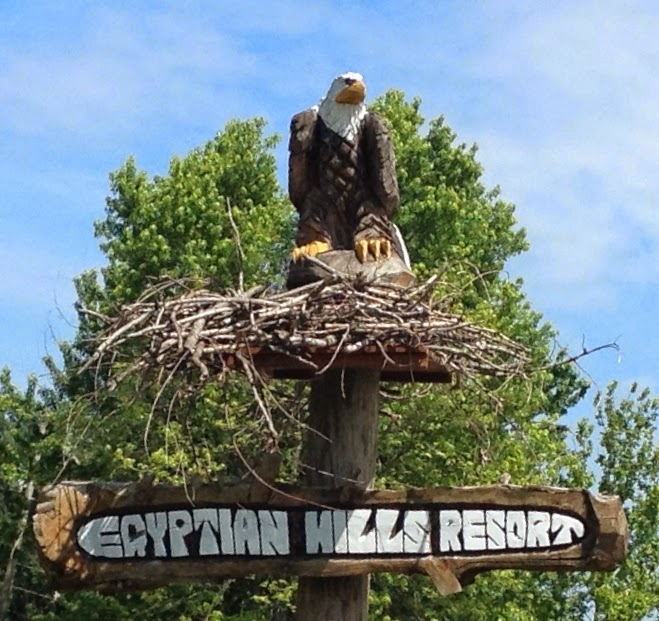 Our host, with whom Dennis had been communicating to figure out the details of our performance that night, was named Micah. When we arrived, Micah greeted us and showed us around. We saw a beautiful lake with several boat docks, and dozens of cozy wooden cabins around it,  each one with green tin roof. There was a stage, with a fancy tent over it, at a gathering place which also had an open air restaurant. 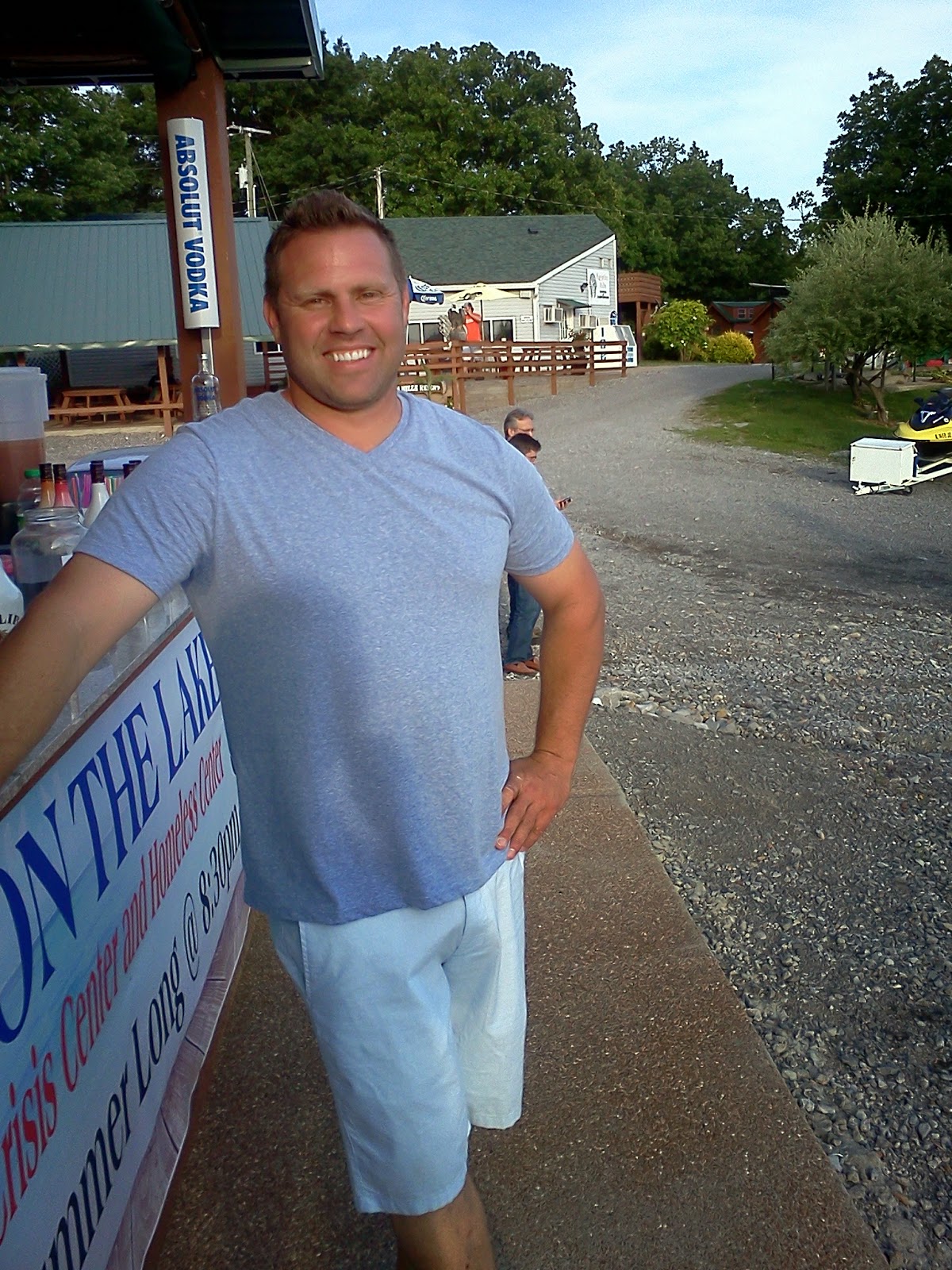 Micah
Bryan, Dennis, Micah and David under the tent after arrival 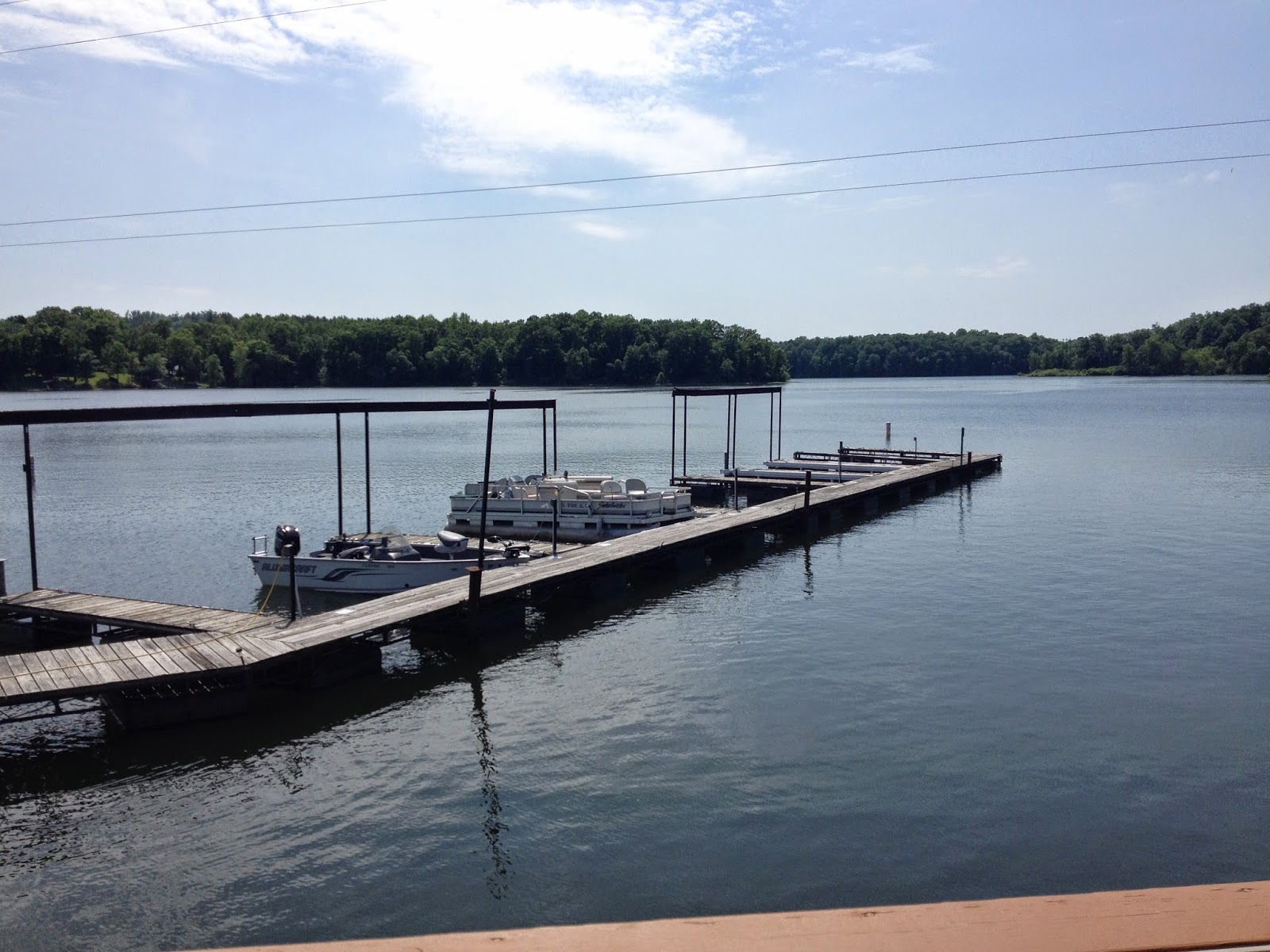 Boats at a dock on Egyptian Lake

Micah showed us a cabin where we would stay that night, and told the story of how he had worked to landscape the area by putting in stone pathways and several fountains that pumped water from the lake. Dennis suggested a photo of me playing sax by what he hoped people would recognize as a "fountain of youth." 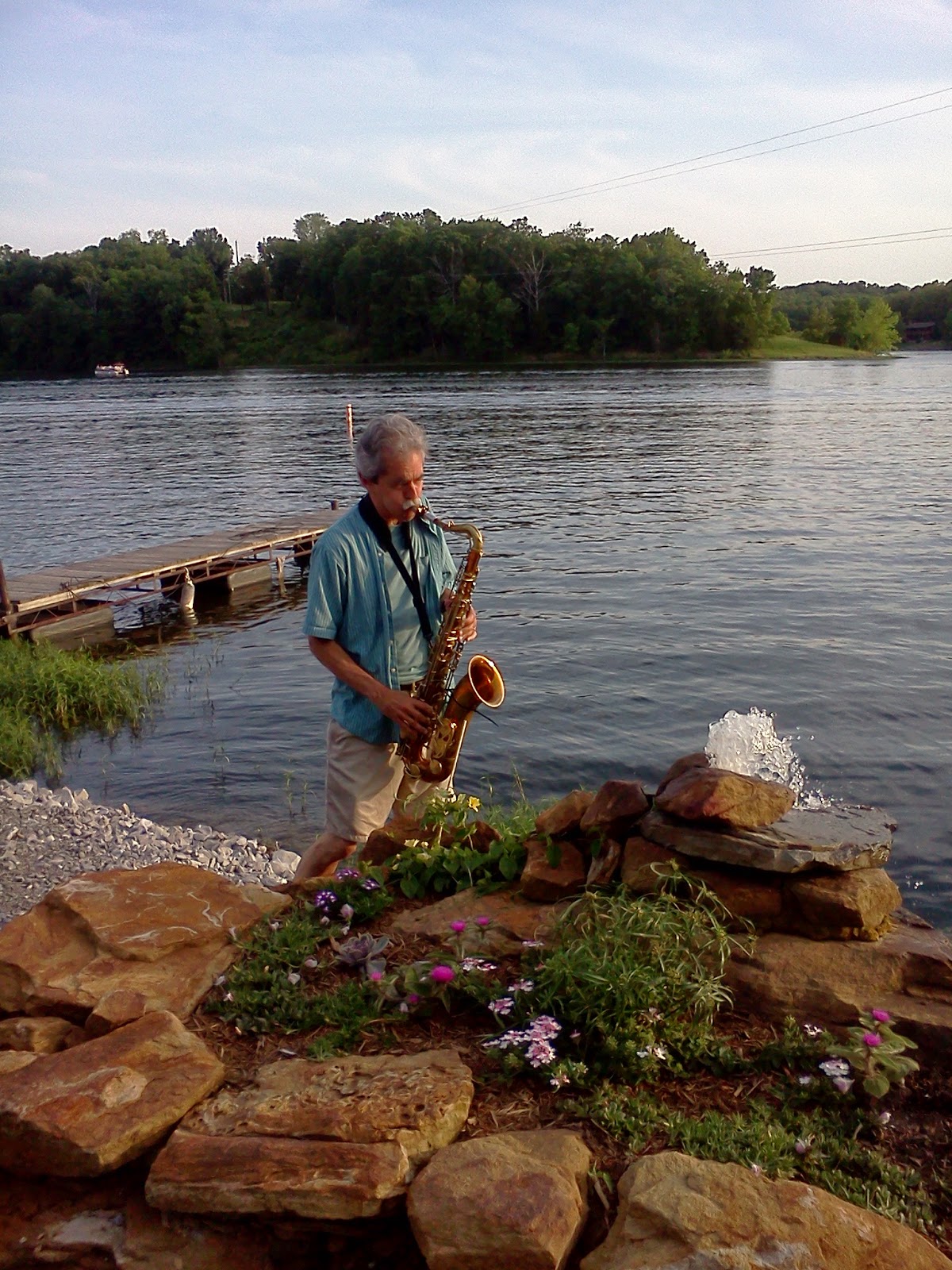 Micah told us he and his business partner had bought the place when it was a humble fishing camp. They completely rebuilt it, with the thirty cabins and fountains and other facilities. And this year they were starting a concert series at their waterfront stage, called "Legends on The Lake." The WannaBeatles were their first show in the series.

View of waterfront stage under the tent before show

View of lake from stage, with banner that shows that the
"Legends On The Lake" concert series benefits a local charity, The Family Crisis Center and Homeless Center

These photos are the first time we've published panorama views on this blog - thanks to WannaBeatle David's Photosynth app on his iPhone. For those who don't know, David tends to be the hi-tech pioneer among the WannaBeatles. If it weren't for his influence, we might all be driving horse-drawn carriages to gigs lit by candle light.

As we were setting up on this freshly constructed stage, we got to know our sound man Robbie Stokes, a veteran of rock'n'roll who, along with his crew, made us feel right at ease. He's a whiz at programming the Yamaha M7 digital console. 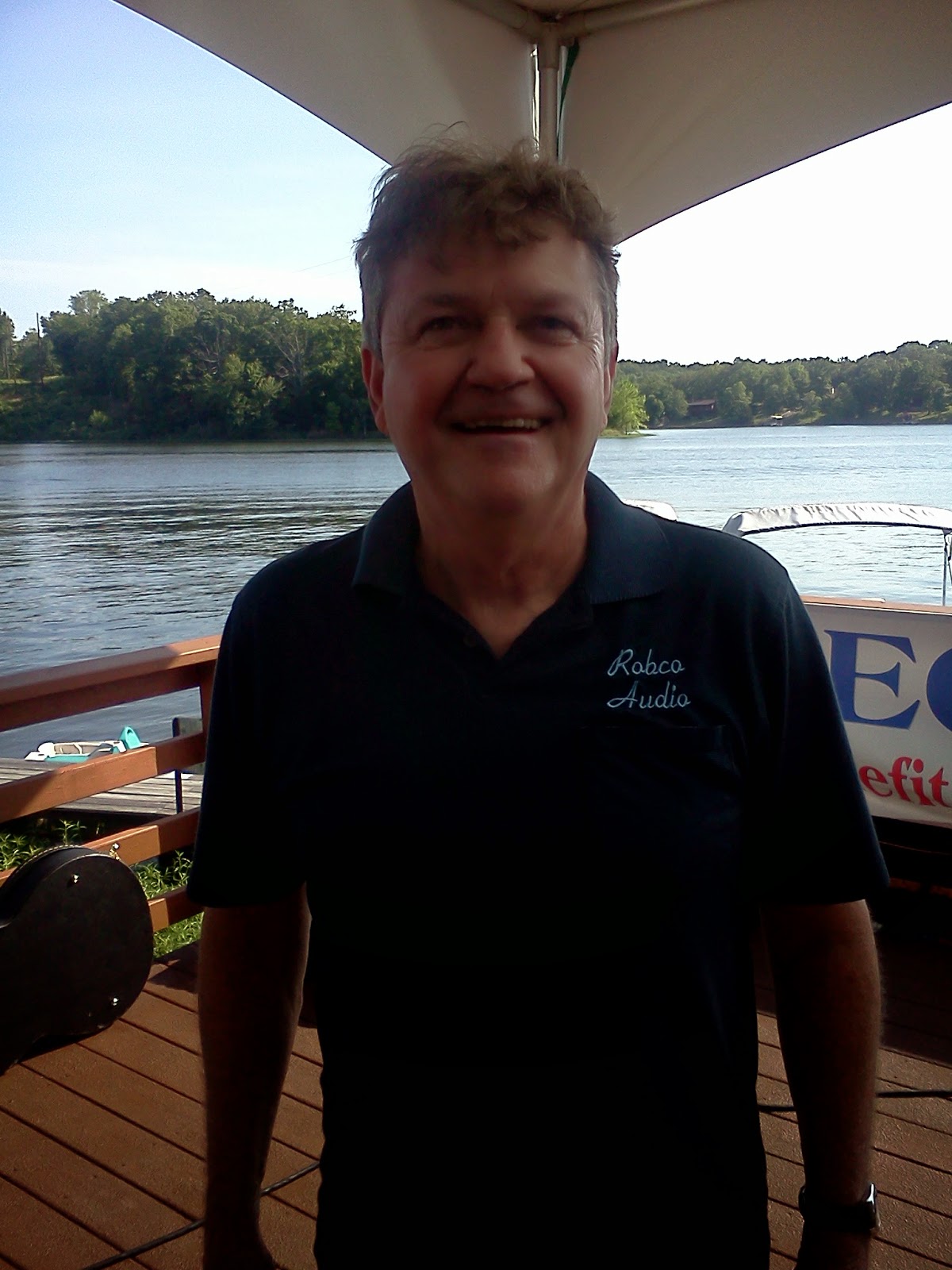 I noticed he used a Heil microphone on the kick drum, which led to a conversation about legendary audio innovator Bob Heil, who's the only sound man, Robbie told me, "inducted into the Rock'n'Roll Hall of Fame." According to Wikipedia, the distinction is more accurately worded as "the first manufacturer invited to display" legendary gear at the Hall.

Born and raised in Illinois, Heil started his own sound company in '66, designing and building speaker cabinets, mixing boards, and other components (including microphones, which was news to me). After providing ground-breaking PA for The Grateful Dead, he worked with Joe Walsh to develop the "talk box," giving another one to Peter Frampton. After touring with The Who, he was commissioned by Pete Townsend to create the first Quadrophonic sound system, which was used on their Quadrophenia tour.

Robbie is also a Beatles fan, having written and recorded a a song about George Harrison with his son Robby called "Believer." He also made us aware that we were not far from Benton, Ill., known to dedicated Beatles fans as the home of Louise Harrison, George's older sister. In late 1963, during a two week break in The Beatles' schedule, George (virtually unknown in the U.S. at the time) visited Louise in Benton. Nearby Mt. Vernon is the site of the music store where George bought a Rickenbacker electric guitar, which recently sold at auction for $657,000. 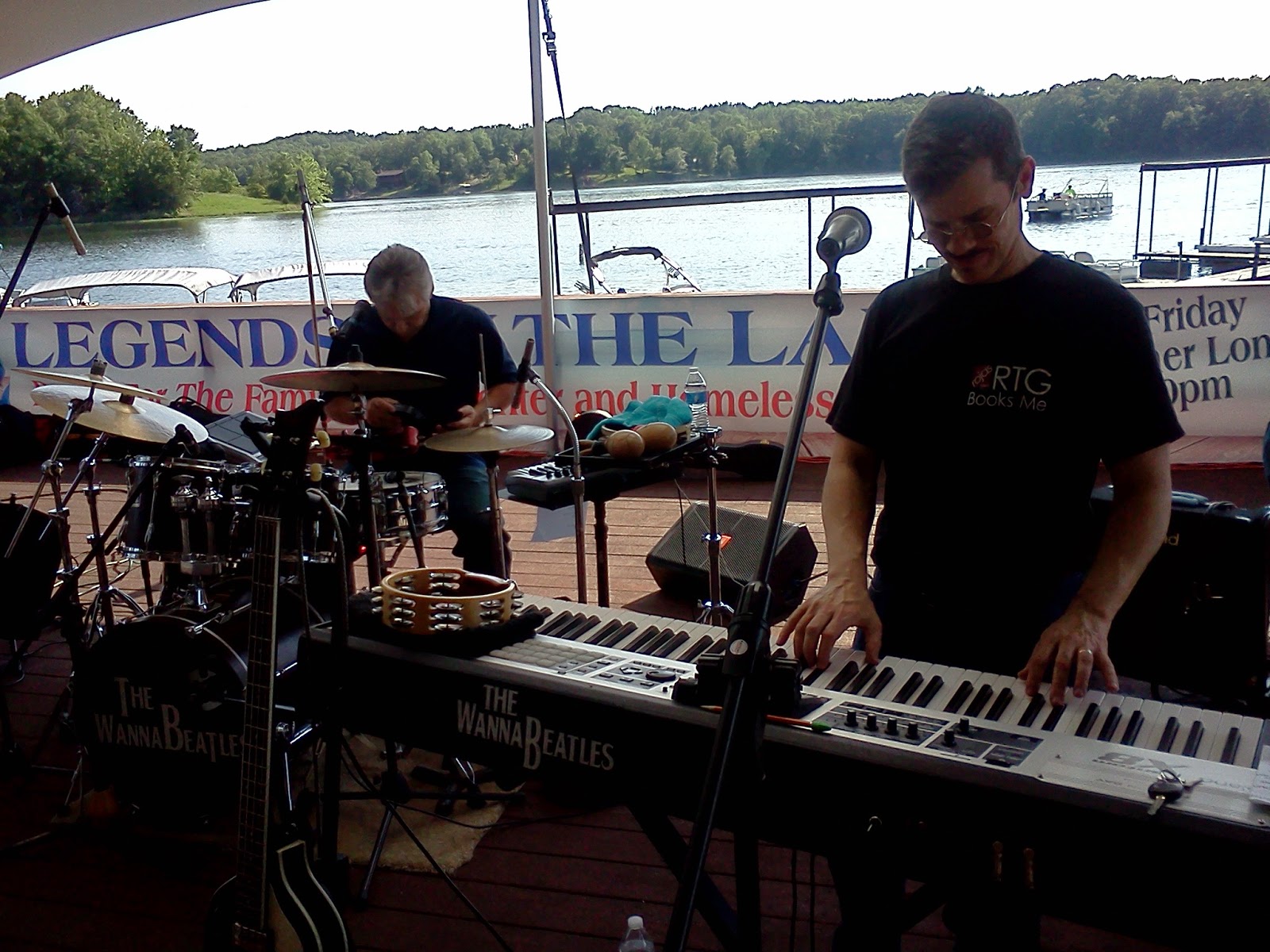 David and Nathan setting up 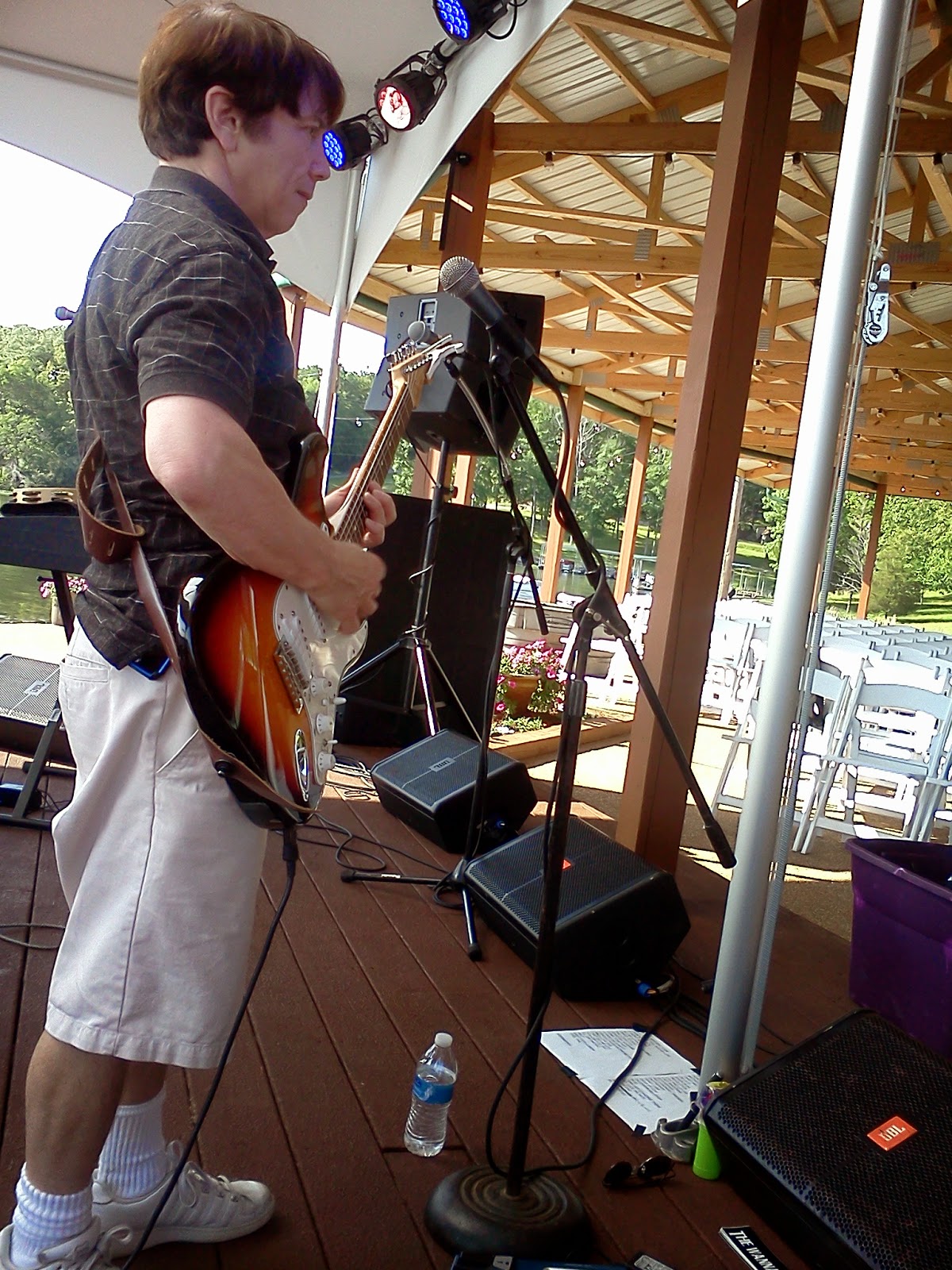 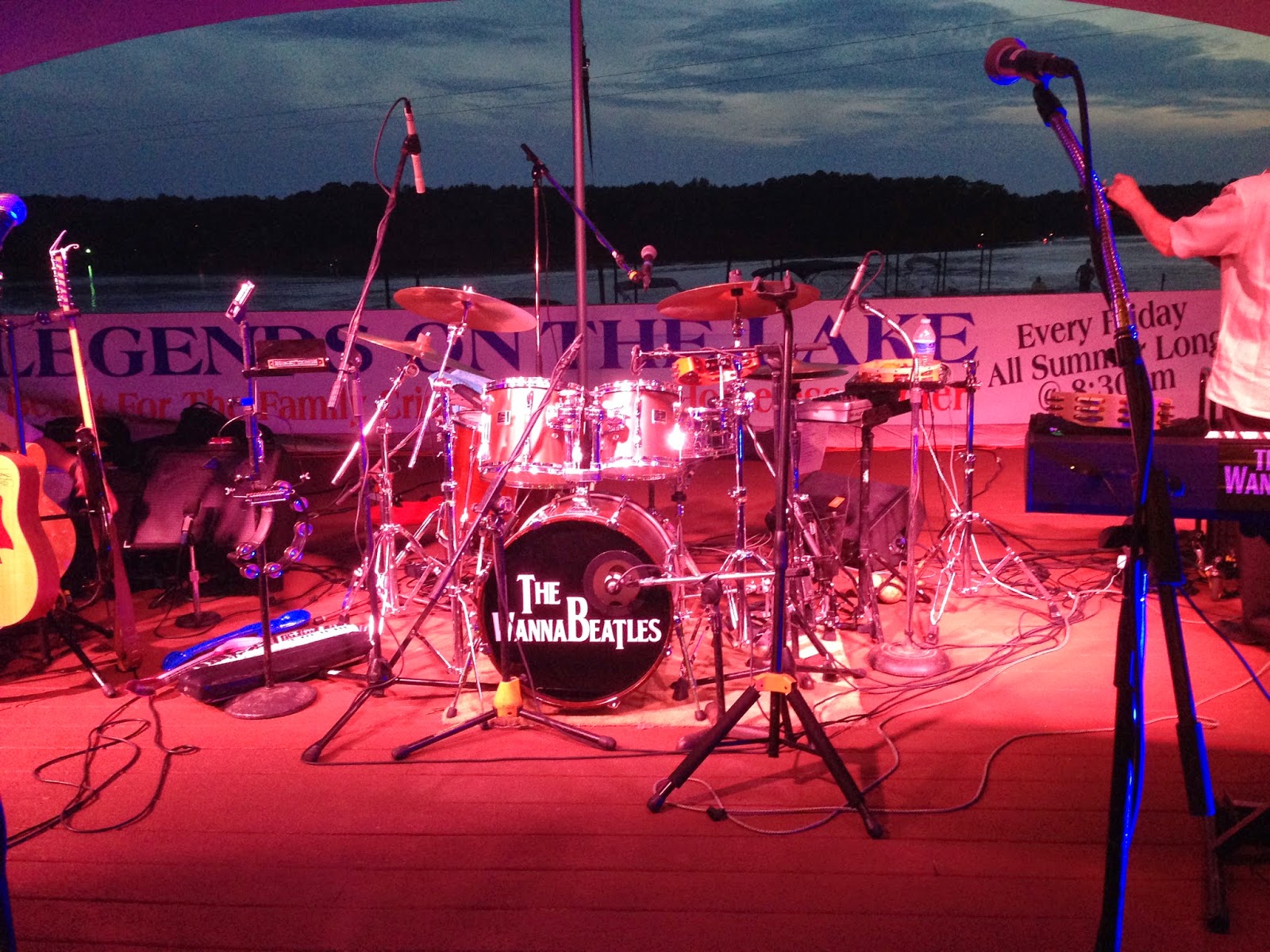 The lakefront stage before the show

We went to our cabin to get dressed for the show, and decided to use our new custom tailored summer shirts, patterned after the Shea Stadium suits the Beatles wore in '65. It was our first time wearing them onstage. Sorry we don't have photos of the new shirts. 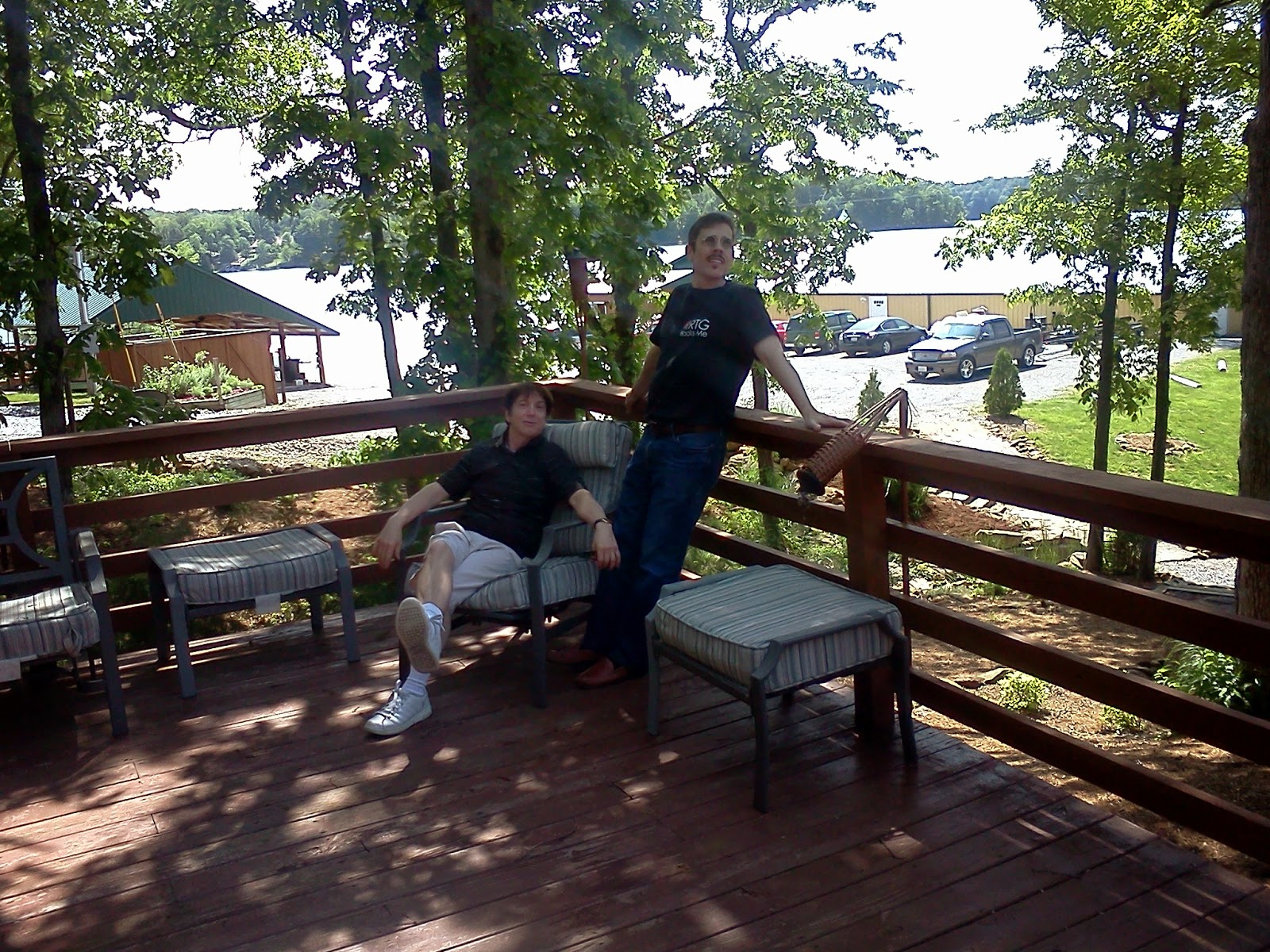 Dennis and Nathan on the deck in the afternoon

We were served complimentary supper at the restaurant/souvenir shop. We had fresh house salads and two pizzas with home-made ingredients. It was a family affair - Carla and two of her daughters were among the staff bringing out our meal. We learned that Carla has a son Abraham who's a talented painter.

We had a great gig, as the sun went down over the lake. After the show, we met folks and took photos at the merch table, and loaded up the van and trailer. And the hospitality of Egyptian Hills continued, as they offered us ice cream treats  - blizzards, floats, with chocolate swirls and pecans, all made with delicious high-fat content ice cream.

We returned to our cabin, found our beds, then after the ice cream buzz wore off, we finally fell asleep.

Here's a view of the inside, David shaving in the morning. 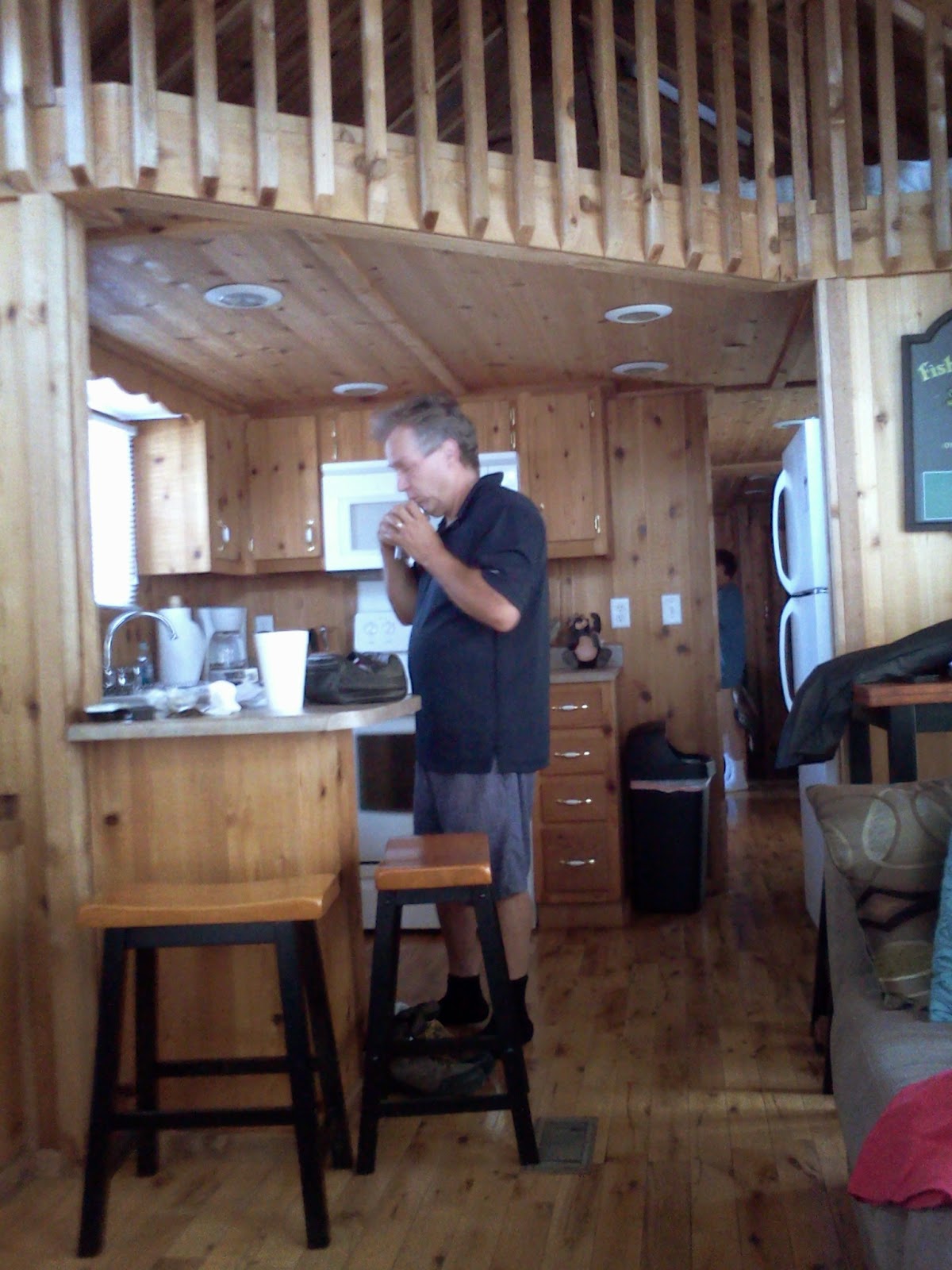 And another one on the deck...

Bryan, Nathan and Dennis on deck in the morning

As we approached our van, we encountered Carla and her youngest daughter Anna and paused for some more photos.

Then Carla asked us "Got a minute?" and took us back into the restaurant, where she pulled out a cardboard box full of prints of paintings that her son Abraham had done. We were astounded at the quality. He mainly paints nature scenes, but with exacting detail and realism. Since Carla had extra copies of most of them, she allowed us to choose one for each of us.

Nathan and I both chose copies of the same painting. 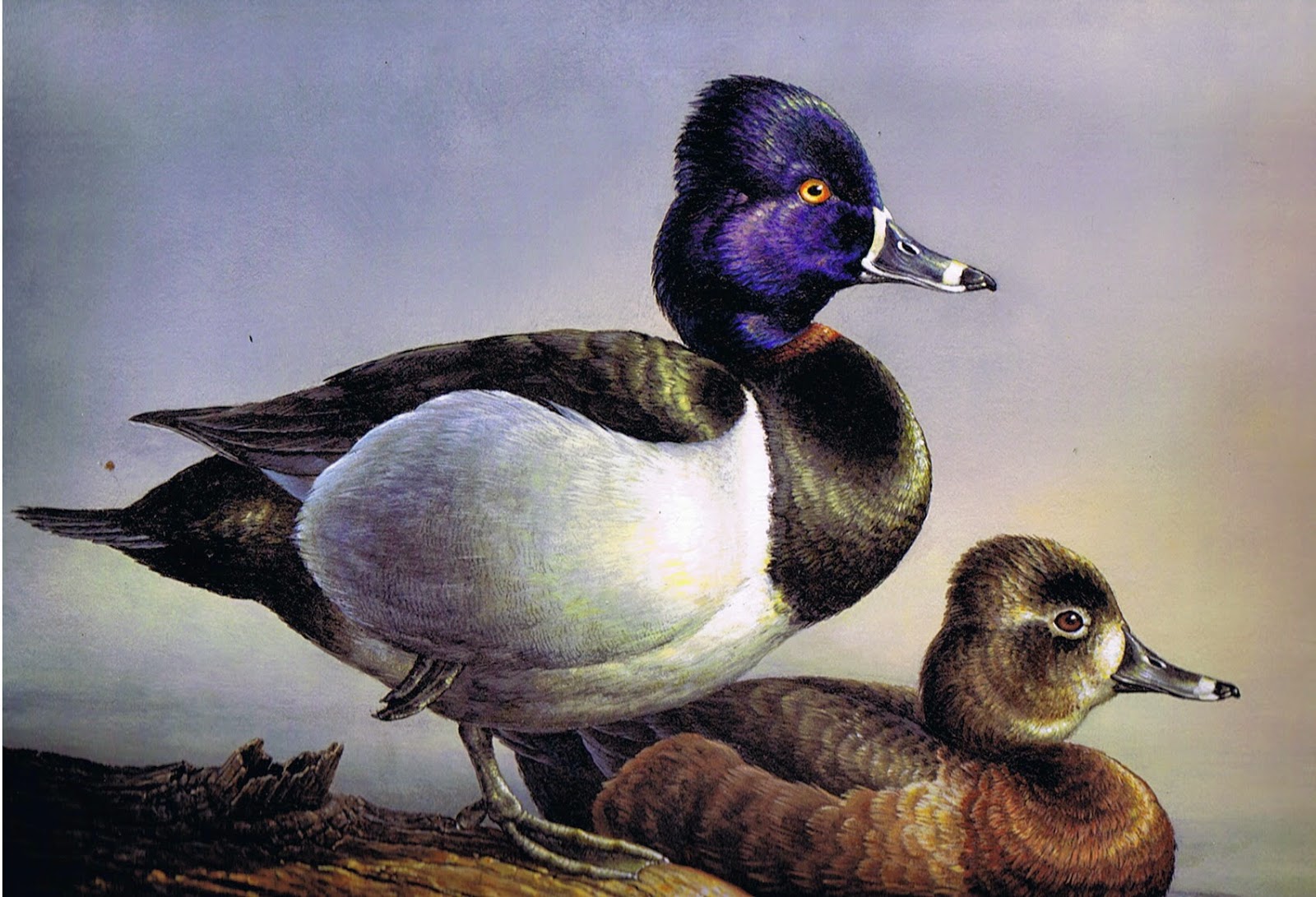 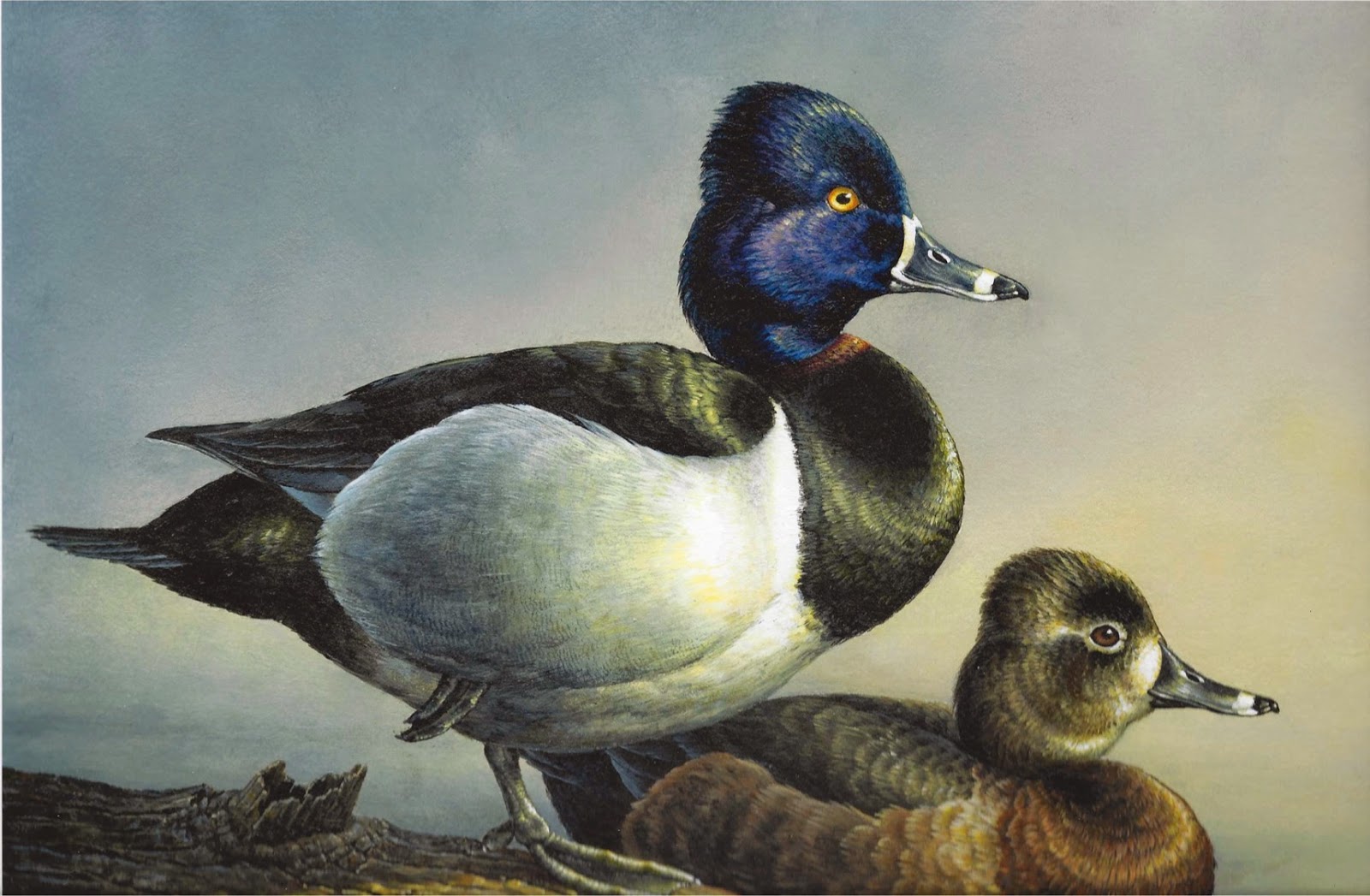 These are portions that would fit into a scanner, of our two different prints of an original oil painting by Abraham Hunter called "Resting Ring-Necks." There's a difference in tone color, but in both the skill of the artist is obvious. He was about 20 when he did this.

So that's how we experienced Egyptian Hills Resort - a beautiful place, with lots of people we really enjoyed meeting.
The trip began with Sally's new book and and ended with Abraham Hunter's painting, with lots of music in between, at a beautiful lake retreat in southern Illinois - abundant creativity all around us.

Micah mentioned our returning next year, and we look forward to it.

Posted by The Wannabeatles at 8:53 AM