Friday May 30 was the first concert in a new series sponsored by the town of Spring Hill.

Here's the poster they designed: 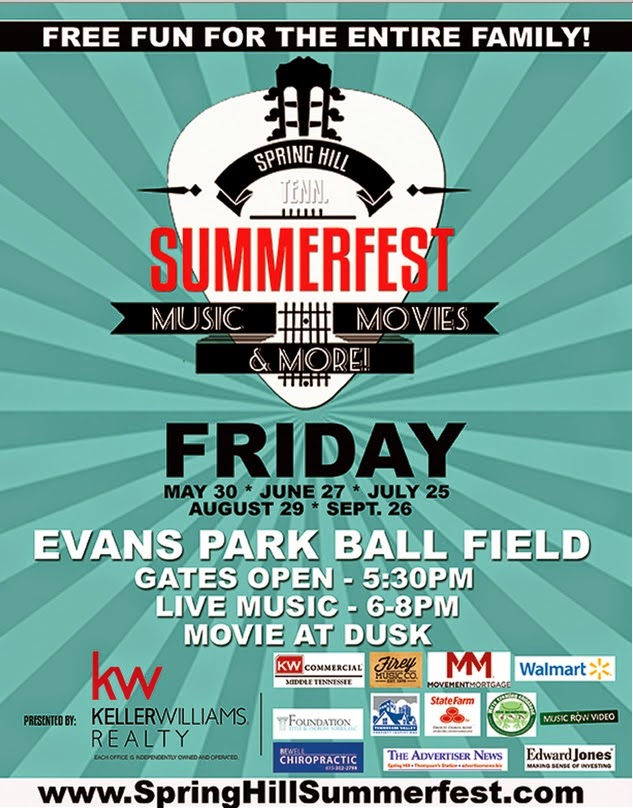 The movie they showed was "Frozen," the recent popular Disney film that has captivated so many young viewers.

We arrived on a warm afternoon at Evans Field, which had a portable stage on one side, covered with a colorful tent. Beside that was the inflatable movie screen. Around the field were tents from Chick-Fil-A and various other sponsors and vendors. 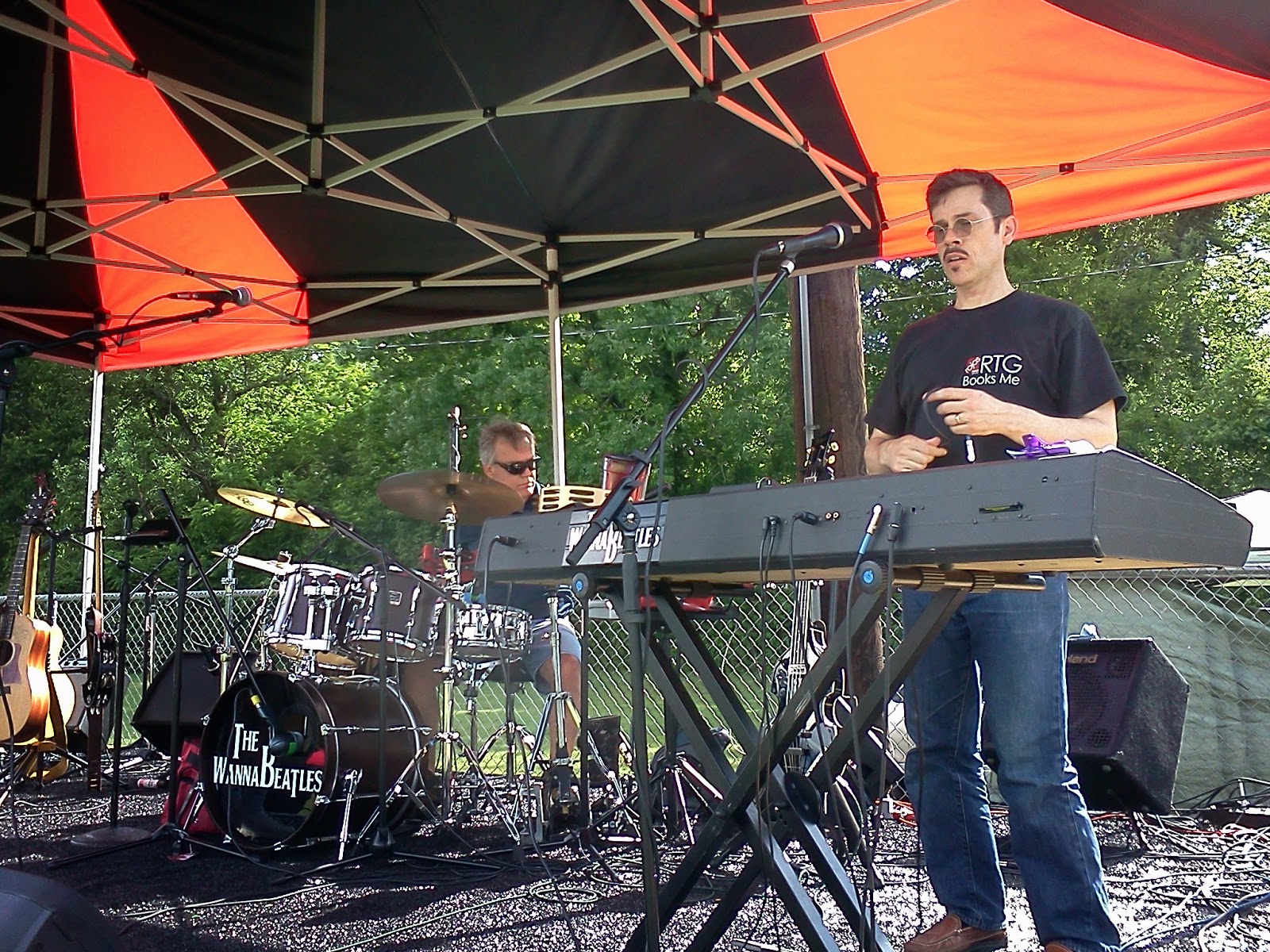 David and Nathan getting ready 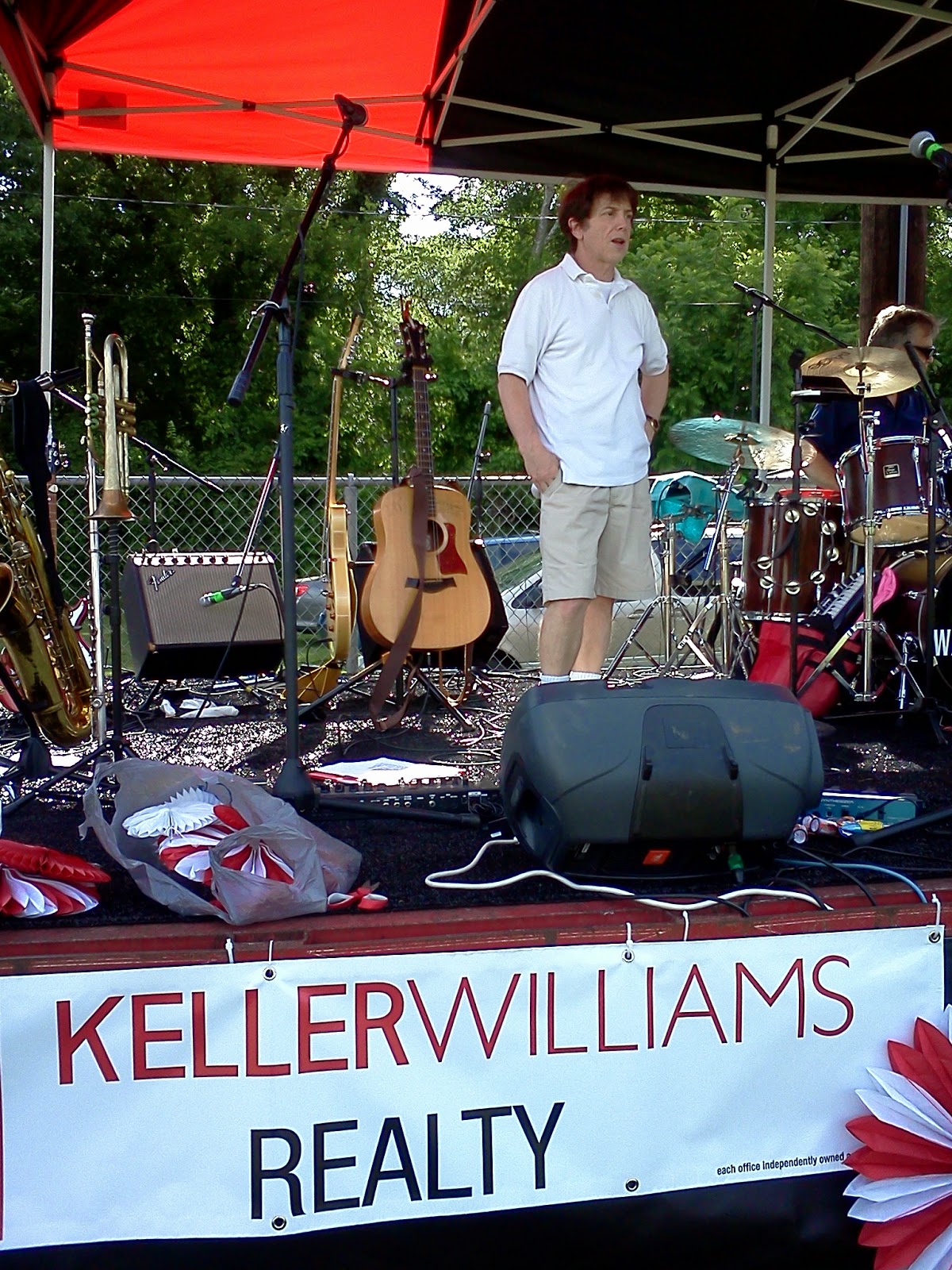 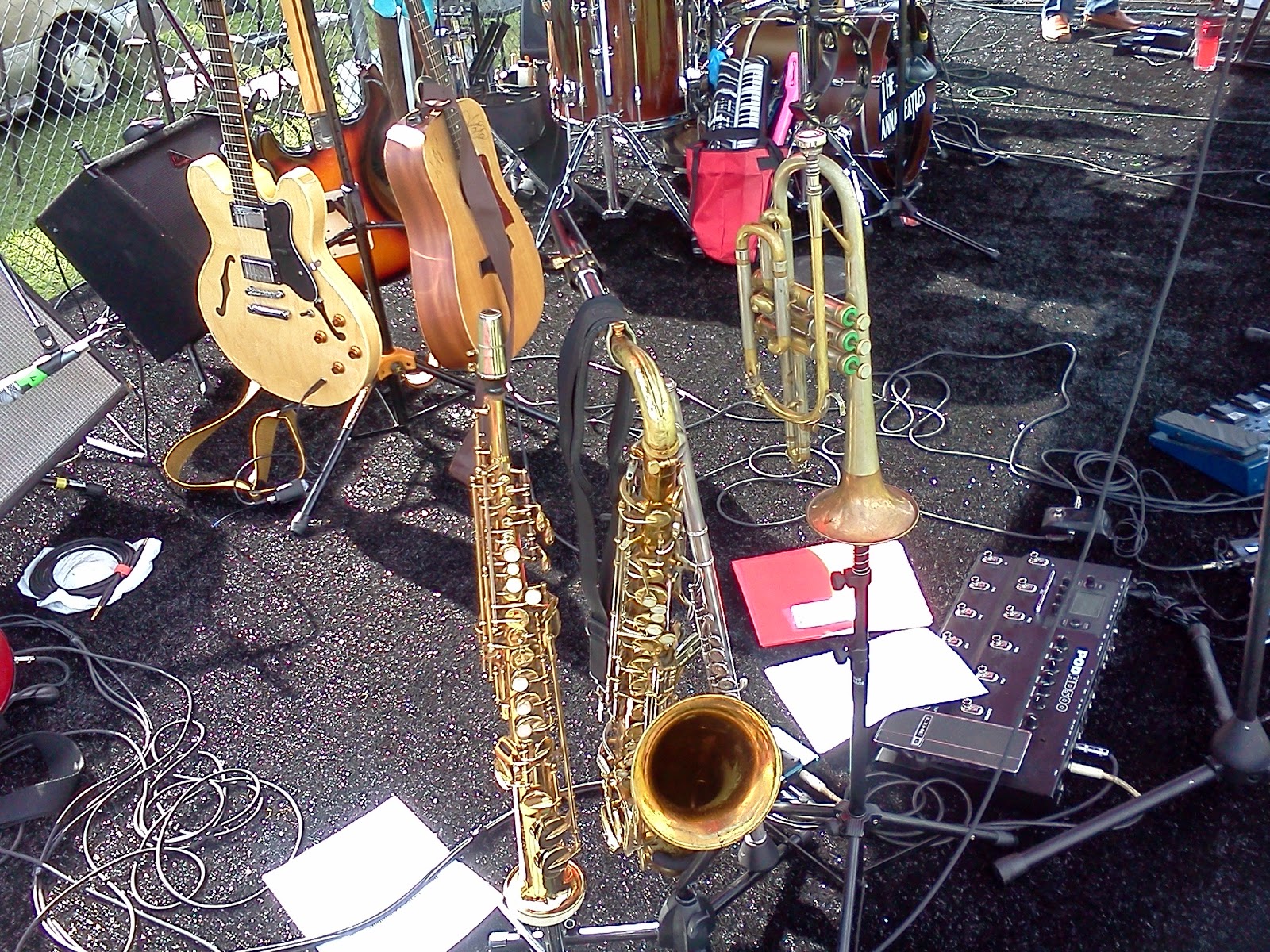 Instruments ready  for the show

The event was mostly the effort of Keri Price, of Keller Williams Realty, which is the title sponsor of the event. Keri had been keeping us informed and encouraged with emails over the last few weeks.

When we arrived, we felt like family friends, because we met Keri along with her husband Steve, a videographer who had worked for WSMV Channel 4 when The WannaBeatles were featured in a brief news item. Steve remembered us from his trip to Dennis's studio for that assignment.

And Steve, with his video production company Music Row Video, started working with Keri's dad, famous chairmaker Charles Brock, to produce DVDs about woodworking, which turned into a web tv series "The Highland Woodworker." Keri, Steve, and Charles own and produce that series together. 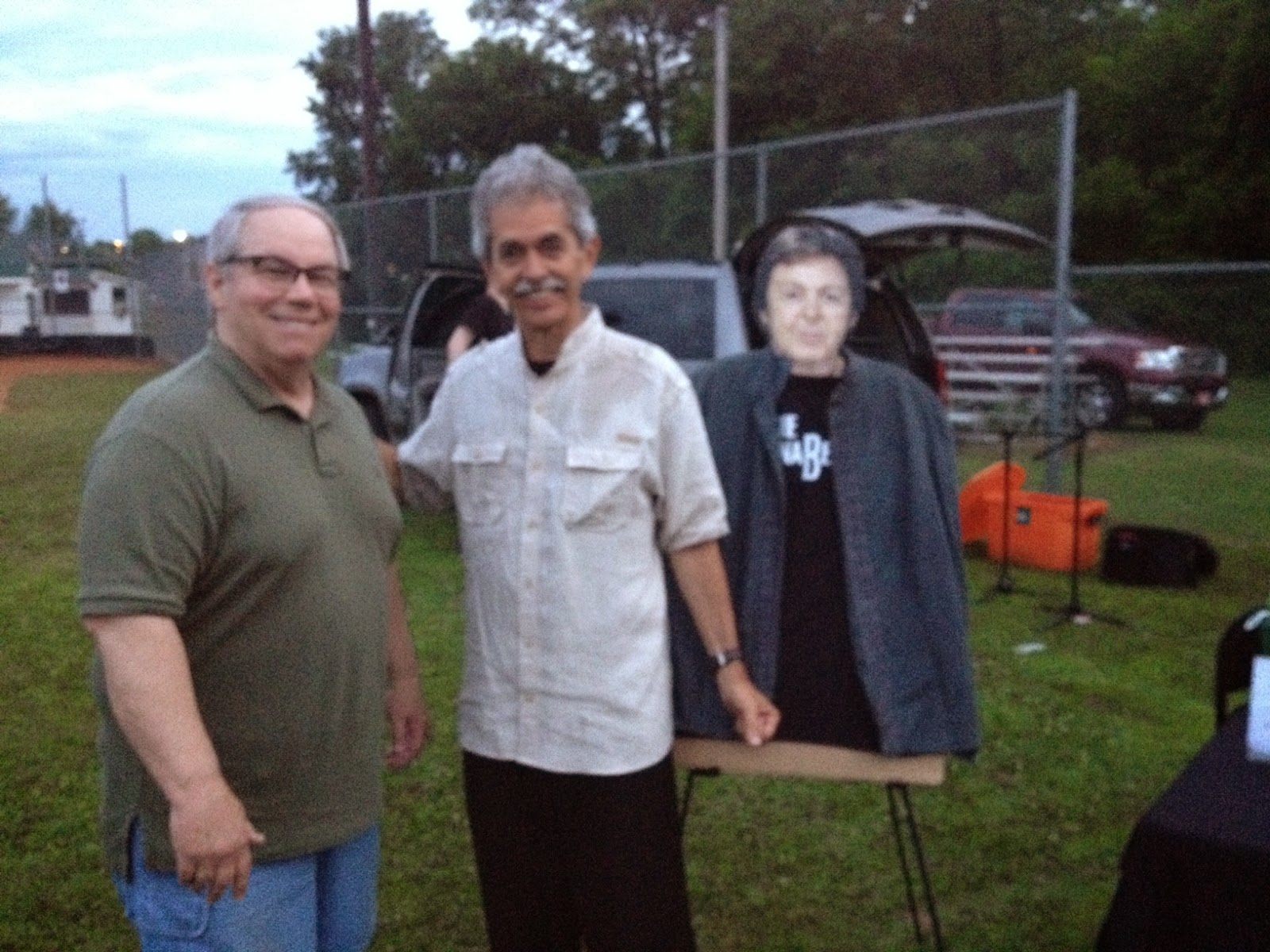 Charles was at the show, and very enthusiastic. He said we could call him Chuck. He told us that he had also been a drummer and a school teacher, and that Keri had shown singing talent at a young age.

The fact that it was outdoors put us at the mercy of the weather. We were waiting to see if the predicted rain storm would dampen the evening.

After we set up, clouds in the sky gradually got darker and closer, until finally, a full rainstorm overtook us. We used the available tarps to cover our instruments. We looked at iPhones to track the weather patterns, noticing that large fronts were headed our way. 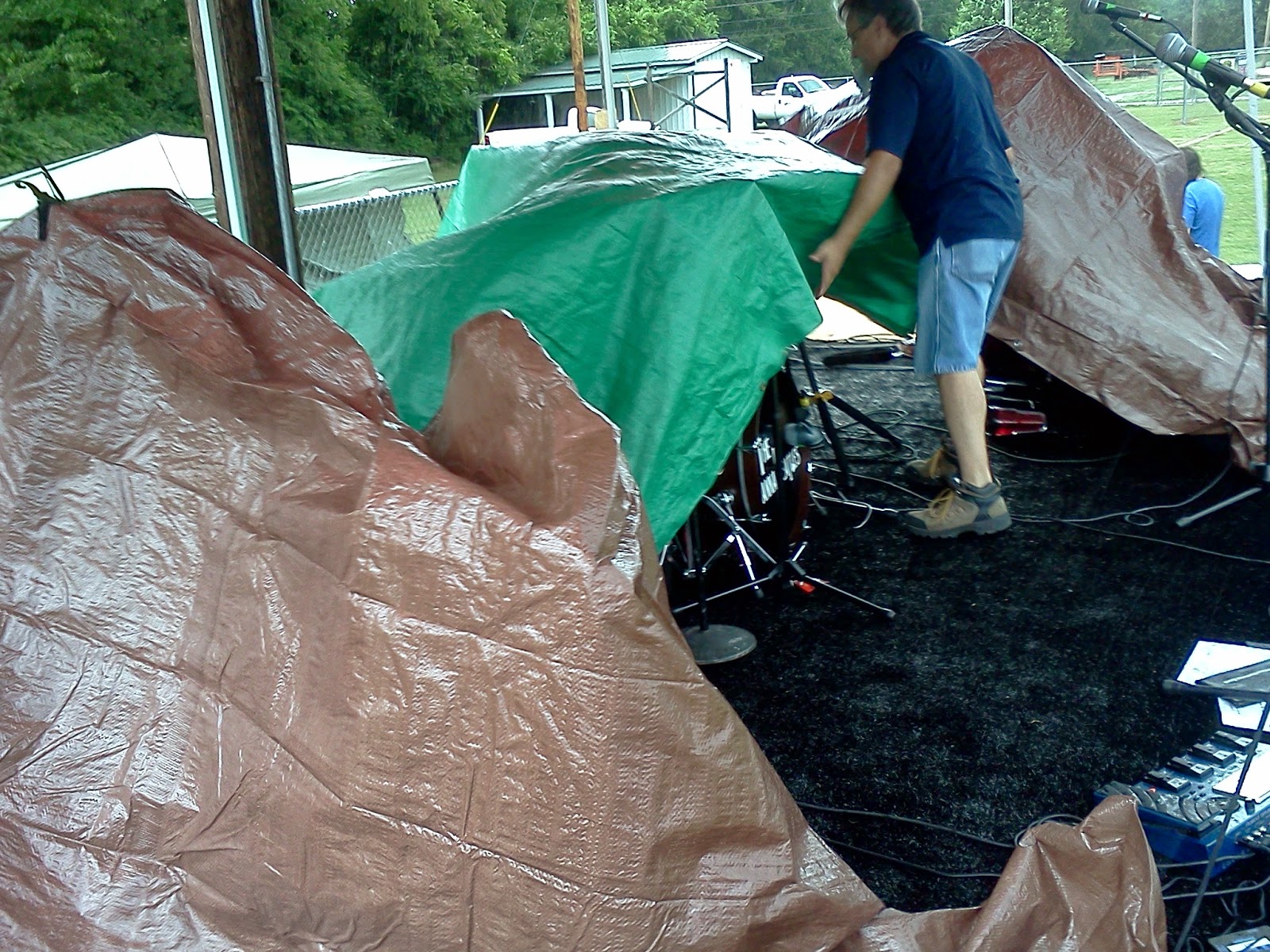 The rain delayed our starting time by about twenty minutes, but we got into our new summer shirts and everything else went smoothly.

Here we are, back on stage, in our summer shirts, with the movie screen in the background.

And a splendid time was had by all. 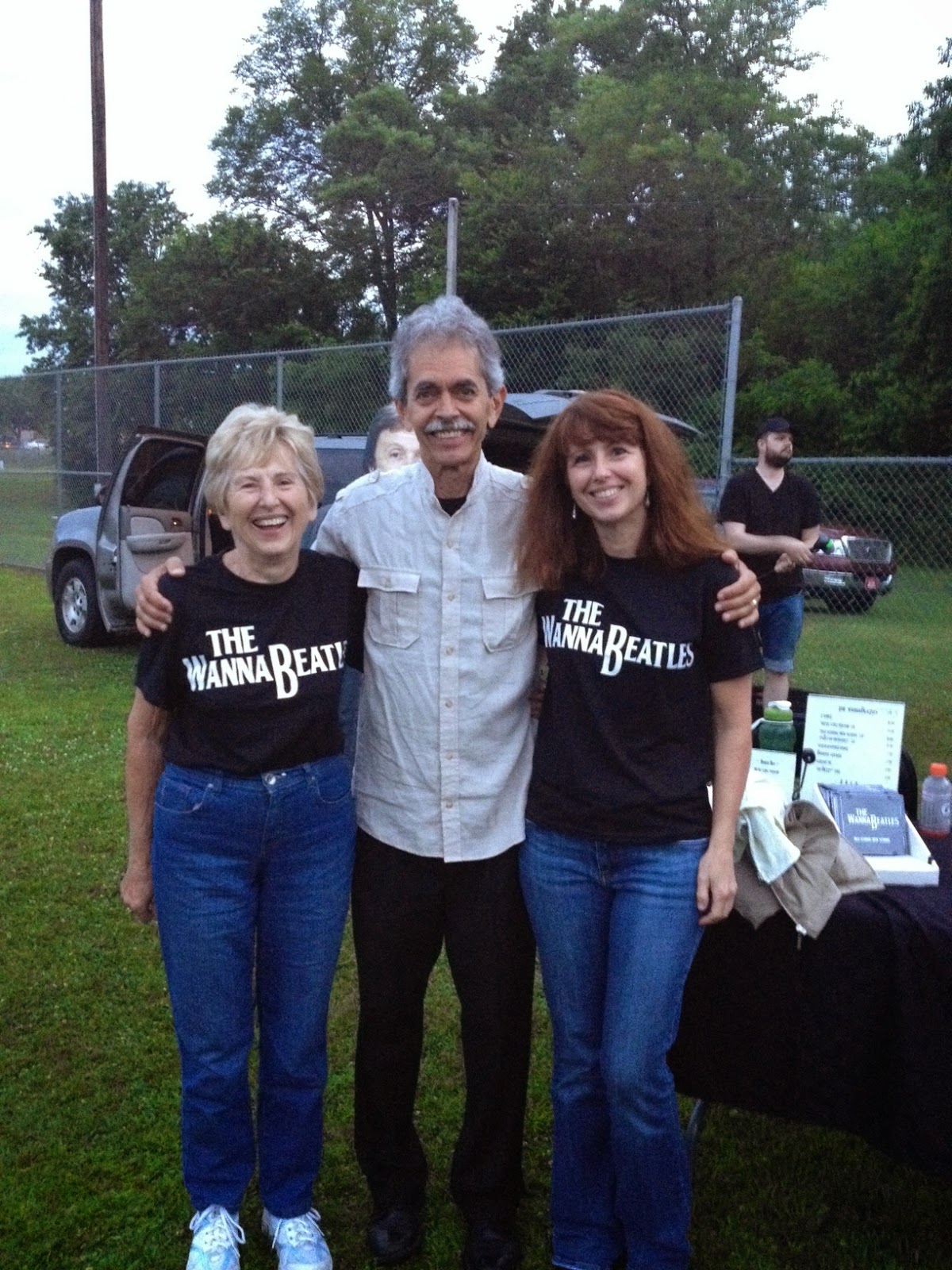 Patricia and Rosemary, two fans with WannaBeatles tee shirts with our autographs on the back

Keri was happy with the first Spring Hill Summerfest, and we look forward to doing it again.

Posted by The Wannabeatles at 6:28 PM