On Abbot Martin Road in Green Hills is a beautiful old building nestled in the lush growth of trees. It fits right in with the other houses of this upscale residential neighborhood. The appearance is so tastefully subdued that a person could drive by it a thousand times without realizing it is actually a civic organization, founded in 1905, called The Centennial Club.

It's what used to be called a "ladies club." All the members are women who are unusually active and motivated to do something positive for their community.

They asked us to play at one of their luncheons on Thursday Sept. 11. Minna Gioia, the event coordinator, told us "You all will play and talk for 45-50 minutes and then leave 5-10 minutes for question and answers at the end." She also invited us to stay for lunch afterward. We appreciated being treated with such graciousness.

Going inside was like discovering a secret society. The building has the elegance of a country club, with an entry hall of polished marble and white columns. It's a beautiful place for receptions and events.

The building has a large auditorium, and a lower level with rooms devoted to art classes. While we were there, a gardening lecture was happening in another room upstairs, with the door closed.

Although the members are all women, certain staff members are male, like the man who helped us set up the stage and sound system.

I ventured downstairs and saw a list of "Don't Miss" activities on their schedule. 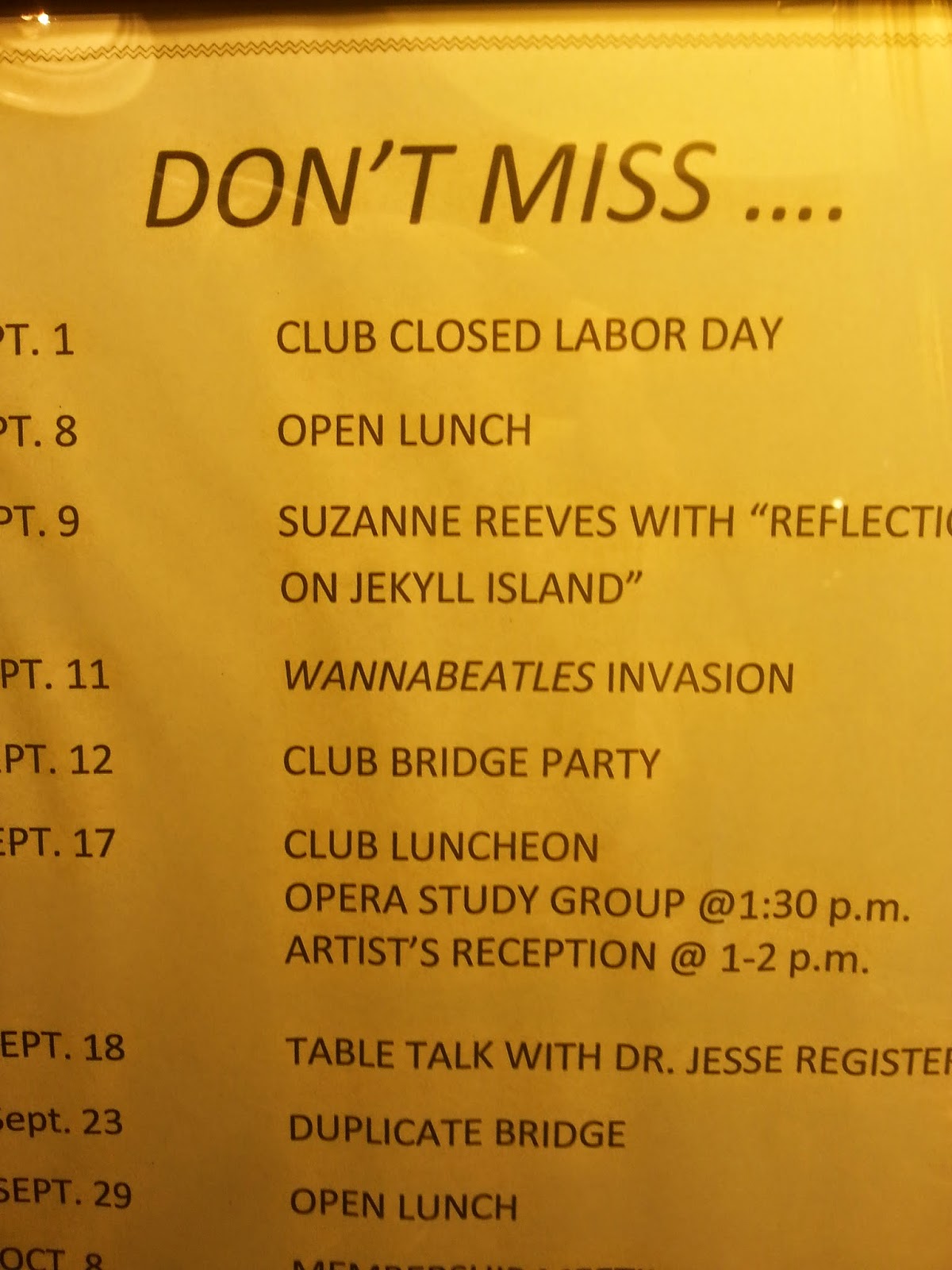 There we were, among the bridge games and lectures on opera, billed as the "WannaBeatles Invasion."

If a picture is worth a thousand words, a blurry picture is probably only worth about a dozen, but this is the result of my beginning to learn how to use my new cell phone camera.
I apologize for the lack of clarity. 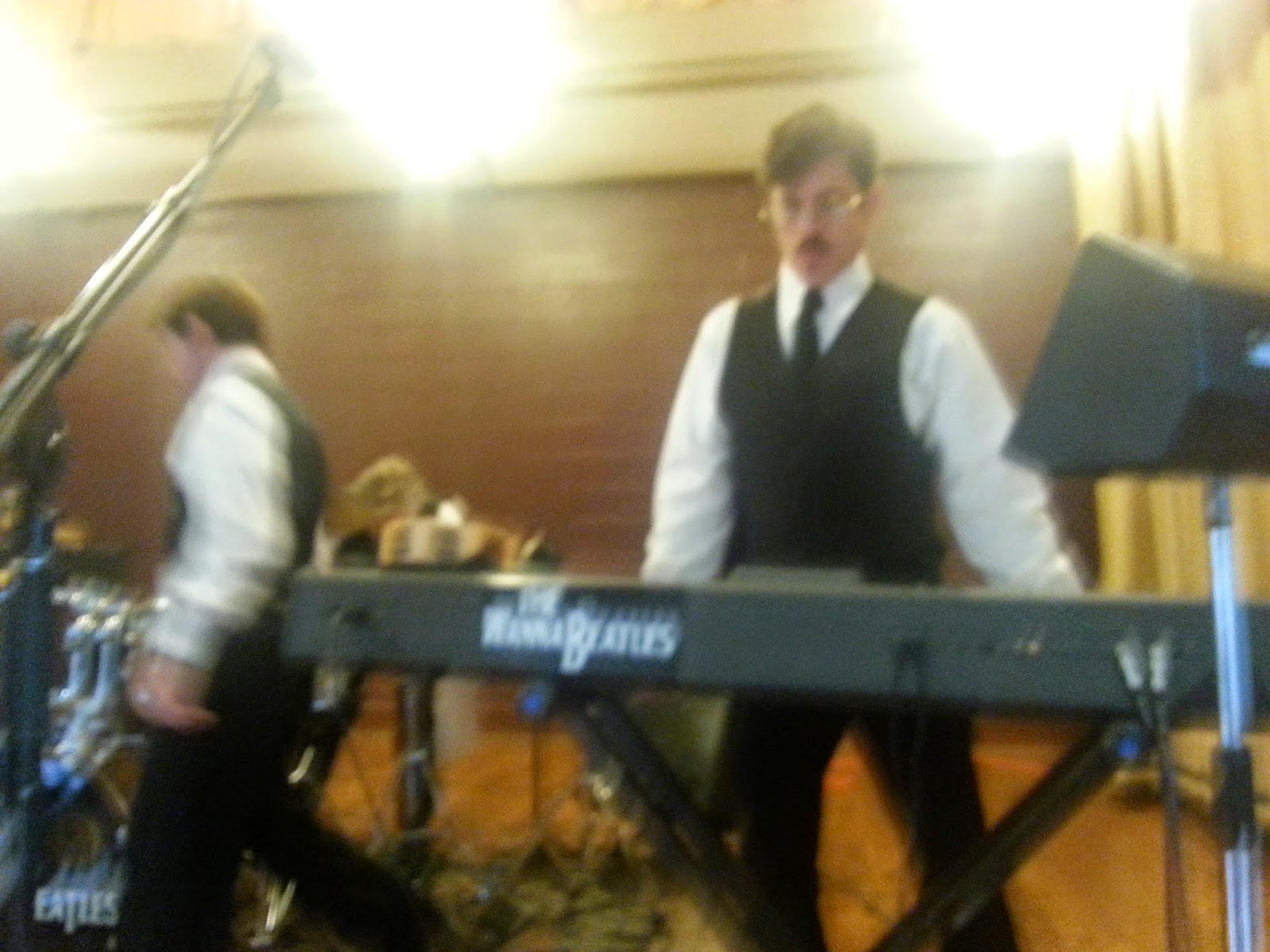 Dennis and Nathan setting up onstage 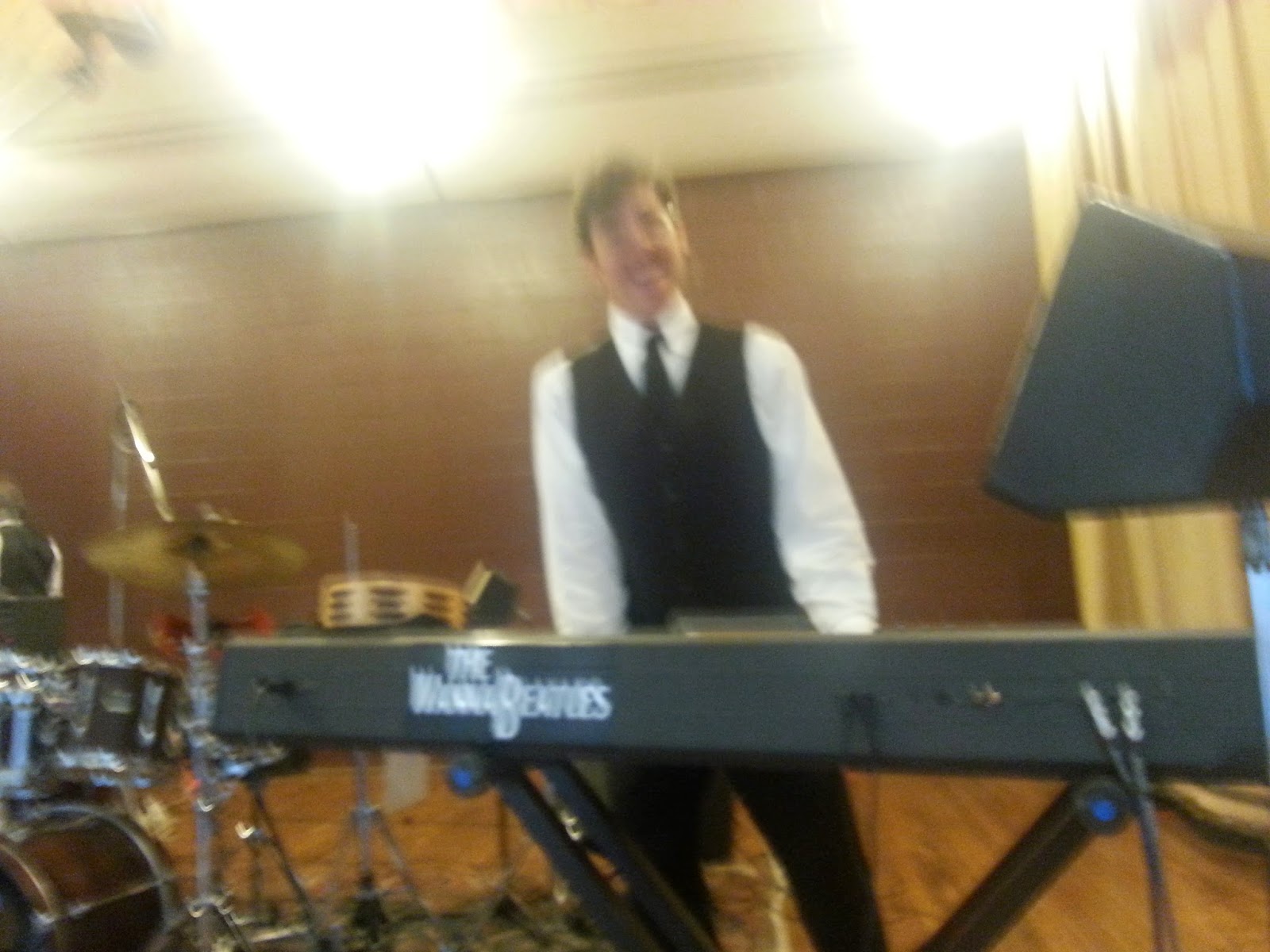 We worked with their stage manager to bring a set of stairs to the front of the stage, to facilitate the part of our show where I go into the audience playing a wireless electric guitar solo. We'll stop at nothing to entertain people. 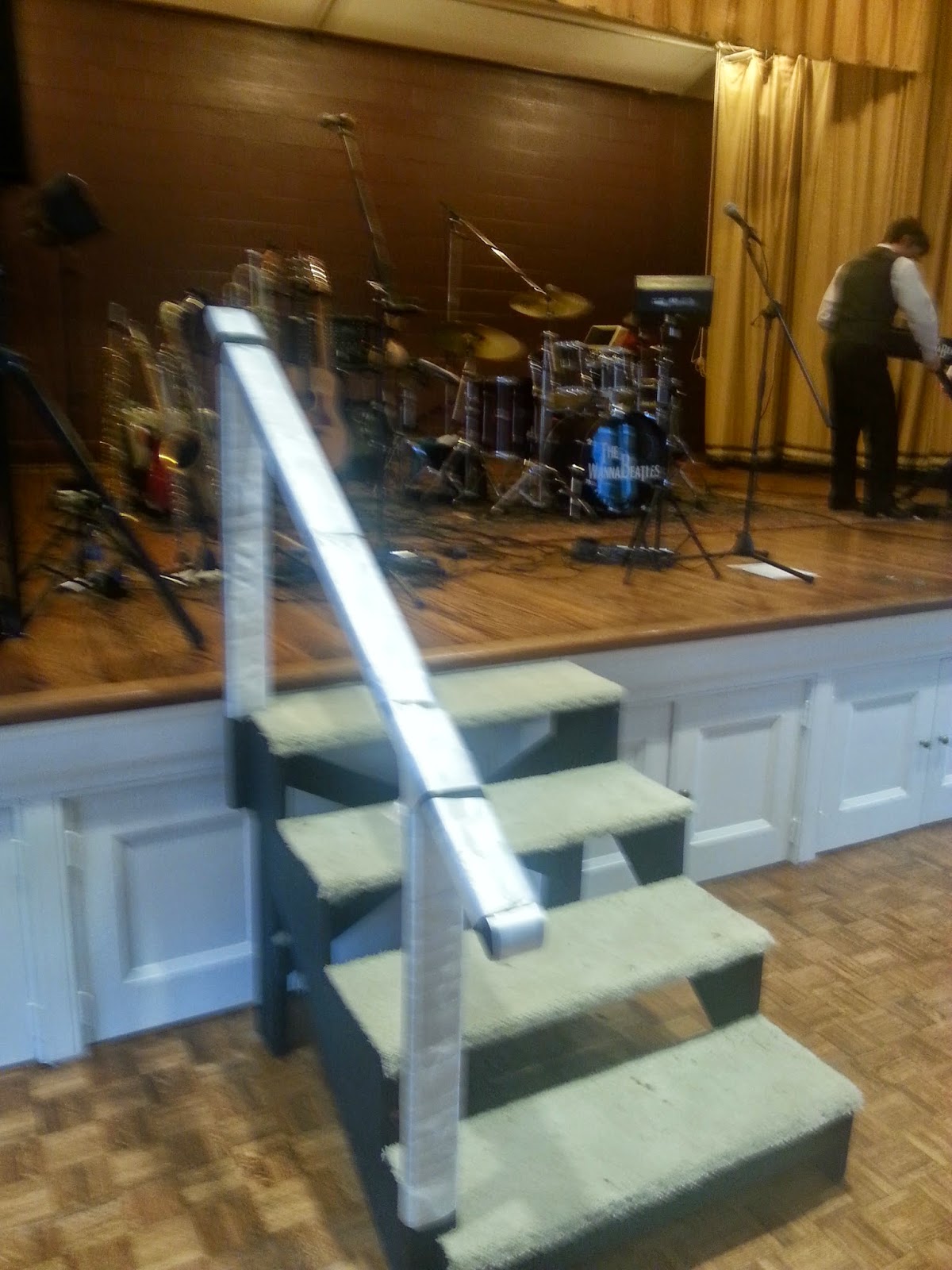 Steps to and from the stage

We were introduced by Minna and after the show, the ladies in the audience asked us questions, as if we were visited professors. And then they included us in their lunch, which was served there in the auditorium to everyone at their seat. It was an elegant affair, with linen napkins, featuring steamed asparagus and some delicious potato cakes.

I was surprised to meet the mother of a friend, 92 year old Marion Couch. 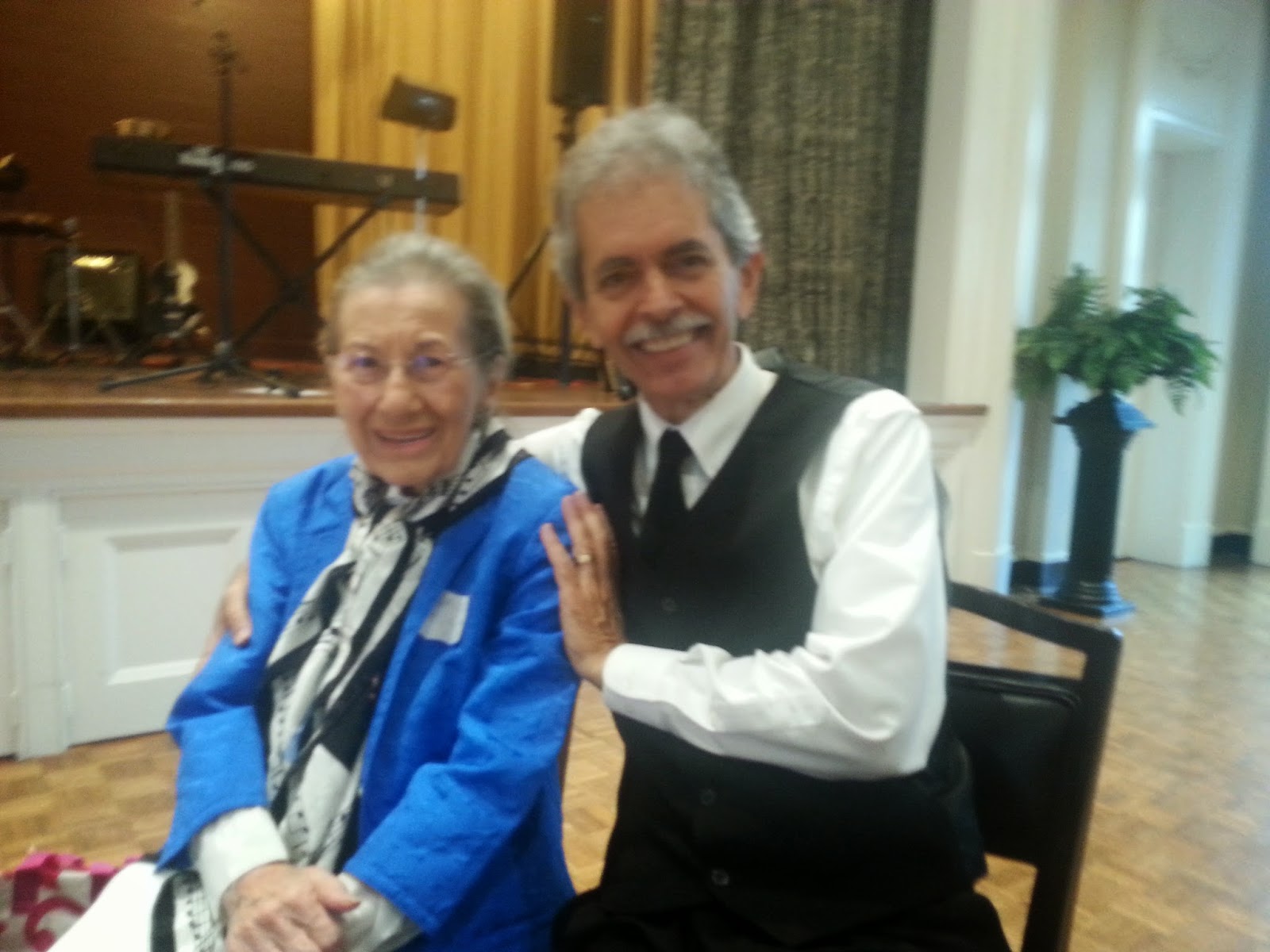 She is very active at the club, still participating every year in the Christmas show, wearing a Santa hat and appearing onstage to lead singalong crowds. It was inspiring to see such energy in someone who's 92.

We set up our merch table in the lobby, and were overwhelmed by the response of the ladies who complimented us and bought our CDs on their way out.

We had a great time at the Centennial club, and the ladies were exceptionally hospitable to us. We hope to see them again.

Thanks Minna, for your hospitality.

Posted by The Wannabeatles at 6:37 PM