The WannaBeatles finished our summer with a long weekend, consisting of three gigs, four destinations, five days of travel, and plenty of connections to old and new friends.

The dates were August 27 through Aug. 31, with shows booked on Thursday, Saturday and Sunday
in Indiana, Maryland and Virginia.

The blog will be divided into three sections, or four, depending on how many fun photos can fit into one blog.

Two of the three shows were return visits, to Bethesda, Maryland and Clifton Forge, Virginia.

Bethesda is very near Washington, D.C., and this year's visit there coincided, as it did in 2014, with WannaBeatle Nathan's daughter Eliza moving into her dorm room at American University, and it made sense, since she was flying back to school from Nashville, for certain items of hers to be delivered to her room by way of the WannaBeatle Mobile Equipment Caravan, consisting of our rented Tundra pickup and a U-Haul Trailer.

Nathan comes from good New England stock, which makes him a devoted dad, a practical planner, and an efficient packer. Our story begins with his finding the ideal location for Eliza's luggage in the WannaBeatle trailer, laudry baskets and hair-dryers among the drums and guitar amps. 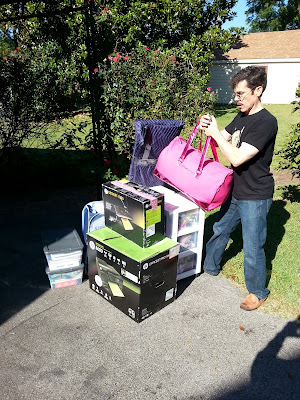 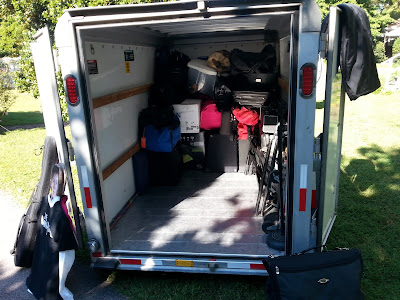 The trailer with Eliza's stuff in back, so we could access the musicial gear easily at our first stop.

We were leaving on the morning of our show that evening at the historic Artcraft Theater in Franklin, Indiana.

There are many towns in the U.S. named Franklin. We had never heard of Franklin, Indiana. But as we found out, it's right up I-65, below Indianapolis. And you pass Franklin, Kentucky on the way. Since Franklin, Tennessee is just below Nashville, we discovered that three different Franklins lie within about four hours of each other along one stretch of interstate highway.

Oh, the things you learn about this wonderful country as you travel. 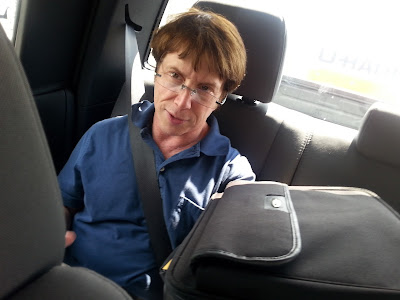 Here's WannaBeatle Dennis, pictured in his mobile office in the rear cabin of the Tundra, administering business on the way to our first gig.

It was a beautiful day, and Franklin Indiana is a lovely town. Playing at their restored Artcraft Theater took us to the heart of the town, geographically, culturally, architecturally, and socially.

We saw our poster at the theater, mounted in a curved glass frame, like the movie posters from nearly a century ago. 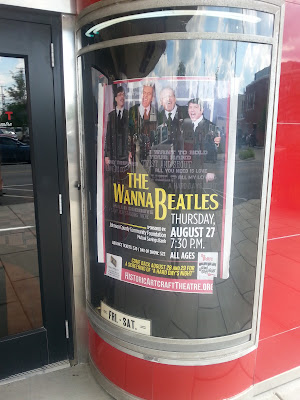 We saw our name on the marquis, advertising our show. 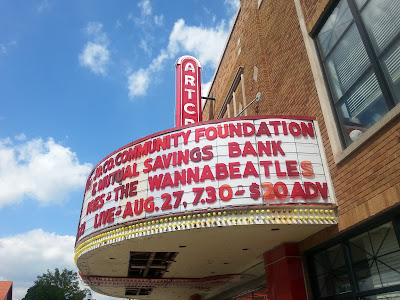 We were greeted around the corner by one of the sound crew. 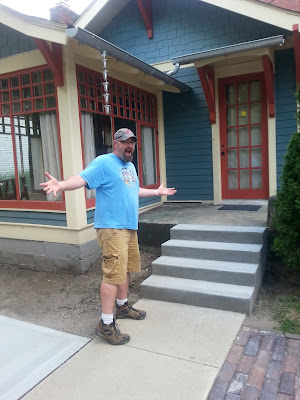 What this turned out to be is a restored house on the same property as the theater, which has been remodelled to  connect directly to the stage of the theater. 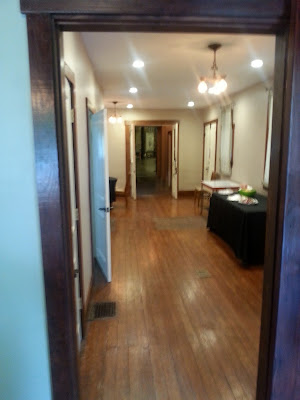 Here's a view of the passage way through the house, past the hospitality table, directly into the rear of the theater. 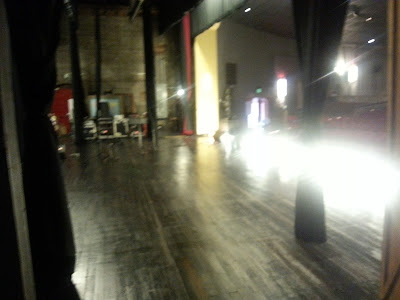 Another fifty feet takes you to the stage, all lit up, ready to go. 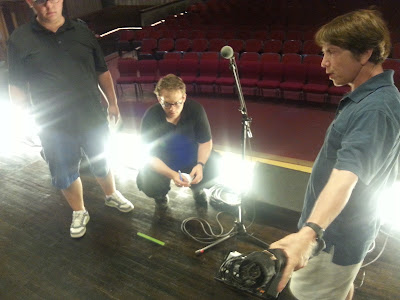 And here's WannaBeatle Dennis conferring with our sound crew. 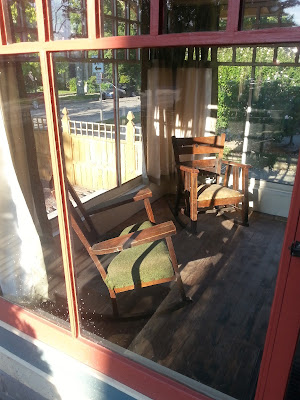 Here is a view of the porch of that lovely house,
where we ate dinner. 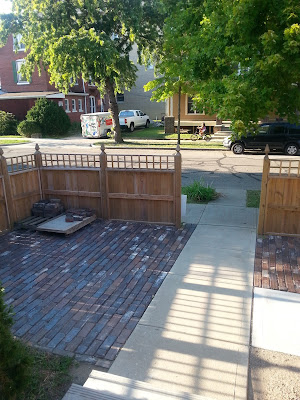 And a view out the back of the house, to where our truck and trailer were parked across the street. 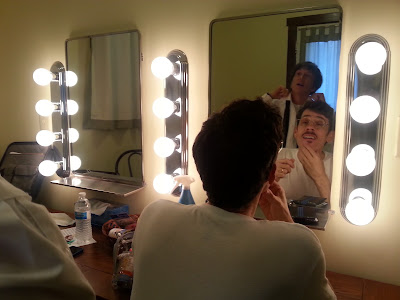 There were two dressing rooms in the house.
Dennis and Nathan got ready in one. 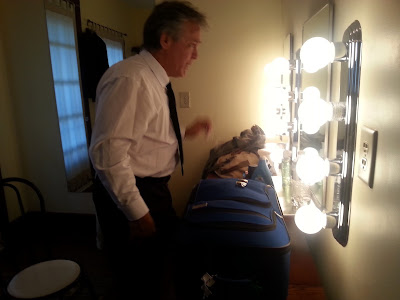 And David and Bloggin' Bryan occupied the other. 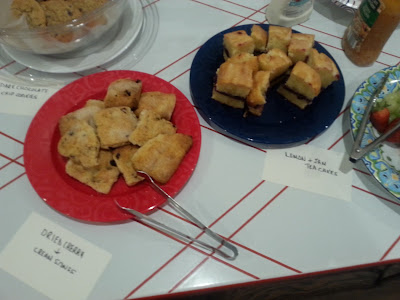 Our friendly hosts, in honor of our appearance, had made special British themed pastries, which were also delicious: cream scones and jam tea cakes. 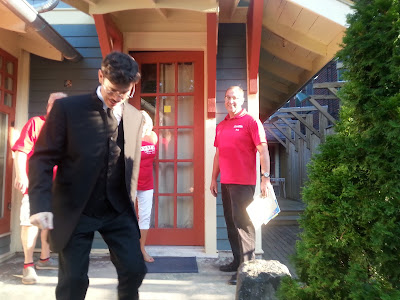 Here is Nathan dressed for the show, leaving the house with the approval of our hosts. 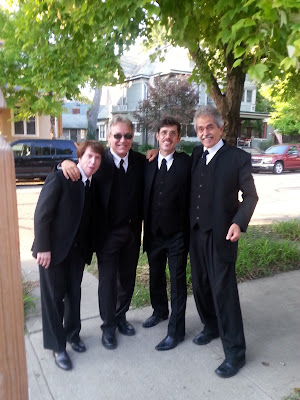 Posed on the sidewalk before the show. 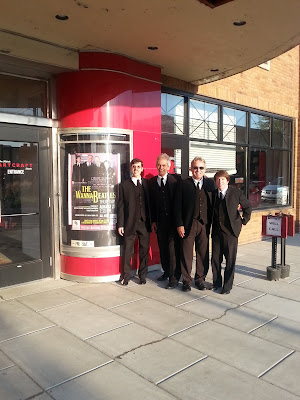 And then around the corner, in front of the theater. 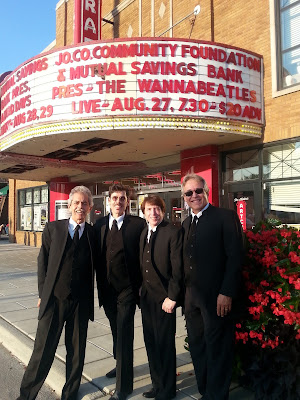 And once again, under the marquis.

In the Bloggin' Bryan tradition, the show itself is undocumented, and you will have to imagine the 90 minutes of fun-filled entertainment onstage, with an audience wild with excitement. It's all in a day's work.

And then, some photos from after the show. 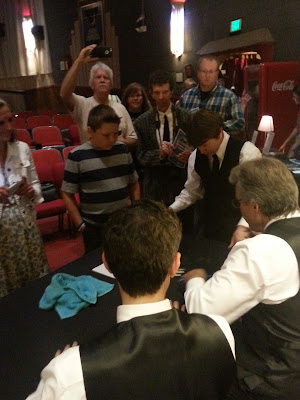 Fans at the merch table, as WannaBeatles sign autographs. 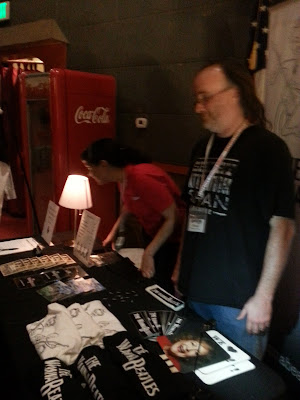 More Artcraft volunteers helping out at our WannaBoutique. 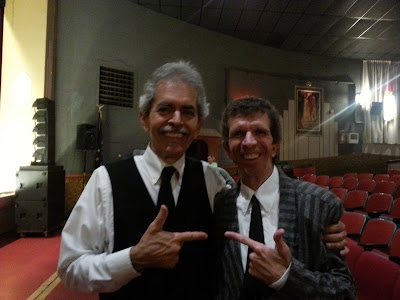 Bloggin' Bryan meets a distant cousin, a member of the  Cummins clan from nearby Columbus, Indiana,
home of Cummins Diesel 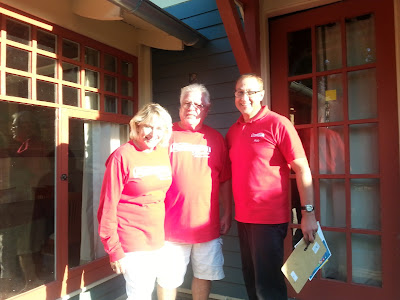 One more view of our generous hosts, tireless volunteers with Historic Franklin, which has spent years working on the restoration of the Artcraft Theater.

Our schedule required leaving Franklin that night after the show. The crew and volunteers all helped us load gear into the trailer, and they insisted we stock up on food for the trip, so we had plates of barbecue, bags of scones, and plenty of soft drinks to power us up through the night, as we drove east toward Ohio.

We felt very loved by the generous and friendly folks of Franklin, Indiana. It seems like a wonderful place to live.

Stay tuned for the next day's adventure, including a special promotional video we staged in a hotel lobby, as part of the creative financing of our tour.

Posted by The Wannabeatles at 6:32 AM