Portland: A Train Runs Through It

In our years of performing in small town theaters and outdoor stages, The WannaBeatles are getting to know America.

In every town we play, we encounter the big picture, from the sound crews and promoters doing their work in the entertainment industry to the local crowd comprising our audience. We get a feel for what it’s like to live in that place, as we spend time with people in the towns and cities where they live.

In Portland, Tennessee, on July 14, we played a show on an outdoor stage set up on their main street. It was summer, so we faced the question of whether it would rain, and whether we would have a show at all. We watched the clouds passing overhead, and assessed the weather maps on our phones. As the sky gradually cleared, people brought their folding chairs to set up in the street to listen to our show.

For us it was all part of a normal summer night in a small town, except for the extra surprise which appeared, loudly and briefly, as a guest star during our rendition of “Yesterday,” thundering along the tracks that run through the middle of town. 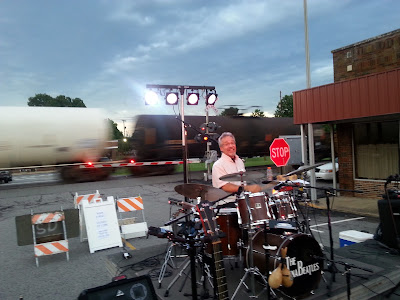 WannaBeatle David enjoying the "backing tracks"
during our show

Yes, the train still runs through Portland, only a few yards behind the stage that was set up on Main Street where we we played that night.

The people of Portland, assembled in front of us on the street, live with the train, so they’re totally accustomed to it. For us, professional performers coming to town and setting up a show for maximum impact, it was a sublimely ridiculous surprise, a comic reminder that we are only part of the passing scenery.

We experienced the physical power of a train. We were humbled to realize, after spending hours setting up a sound system with hundreds of watts of electrical power harnessed to project our voices and instruments to the crowd, that one passing train swallows up all other nearby sounds without even trying.

Even in its massive physicality, the train is a mystery: on its way past us, it rumbles and forcefully shakes the ground. But on either side of that appearance, it comes from a silent distance, and disappears into a silent horizon. In musical terms, the train has extreme dynamics.

The Train: A Mythic Symbol

Our encounter led to questions. Why would a train run through downtown Portland? How did trains become such an essential presence in the American landscape? We realize that the train, beyond its historic usefulness in transportation and commerce, has also become a an enduring mythic symbol.

American songs are loaded with references to trains: the lonesome whistle, the tearful goodbye at the station, the hobo riding the rails, the clickety clack takin’ me back, the Chattanooga Choo Choo. From the idealistic hippie days, we have the Love Train, The Peace Train. Country music gives us The Wabash Cannonball and The Long Black Train. Other iconic examples include Elvis singing Mystery Train, Dylan’s Slow Train Coming, Curtis Mayfield’s “People get ready, there’s a train a-coming.”

American songs tell us that the train is loaded with spiritual implications.

Looking back on our American story, cities and towns were built around people traveling, by water, and horseback, on roads built over natural paths originally made by animals. Not until the1840’s did machinery enter the picture in a big way, with the “iron horse” that belched smoke as it roared down the tracks that criss-crossed the continent as our first interstate.

The WannaBeatles never gave it much thought until we shared the stage with that train on July 14, 2016, in Portland, Tennessee.

Otherwise, it was a normal gig, documented with normal photos. 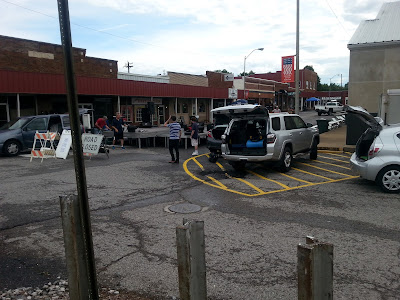 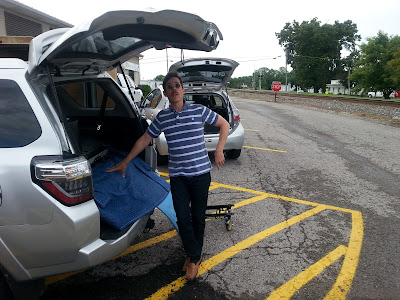 Nathan at his van 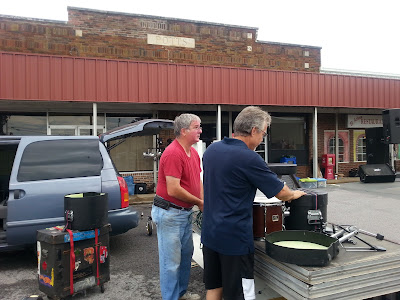 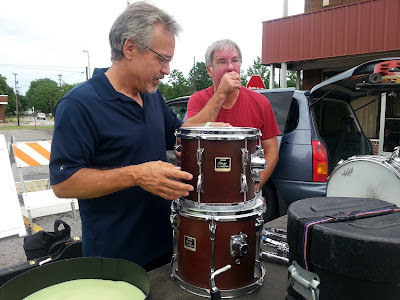 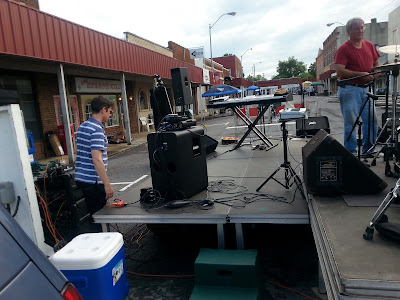 Nathan and Larry setting up 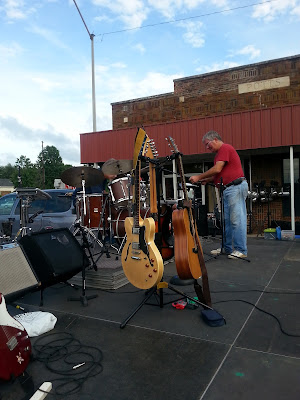 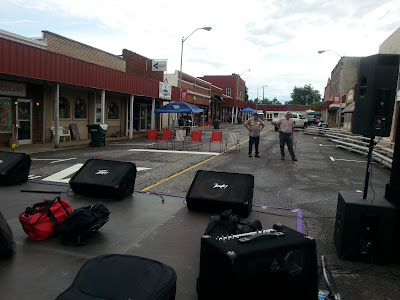 View of stage and monitors 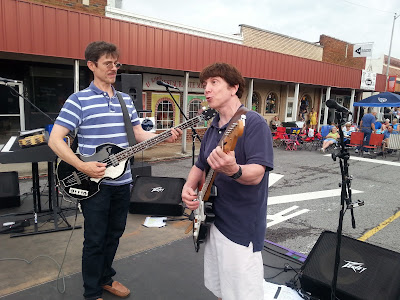 It was good to work with our friend Larry Gregory again. He’s a very hard working man who really does his best to make the show go well. 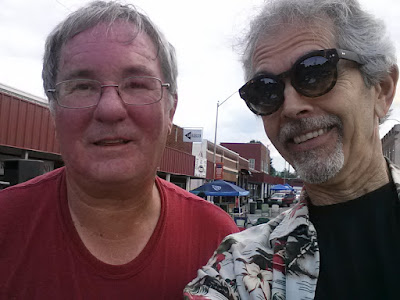 We ate dinner at El Azteca, which was on Main Street, about fifty feet from the stage. 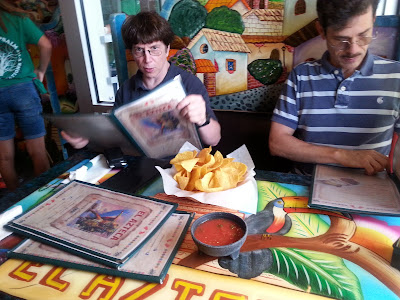 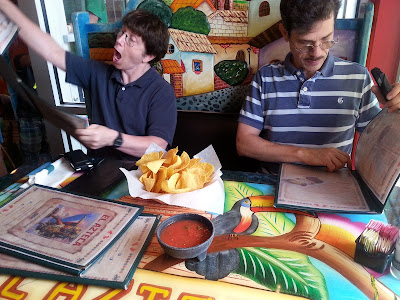 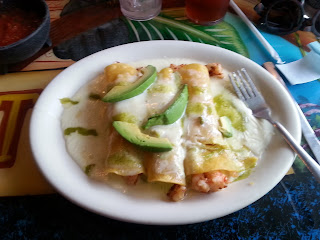 The crowd had a good time, and we always appreciate that. 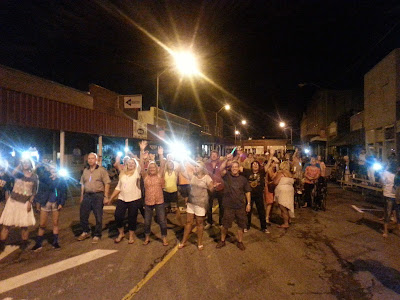 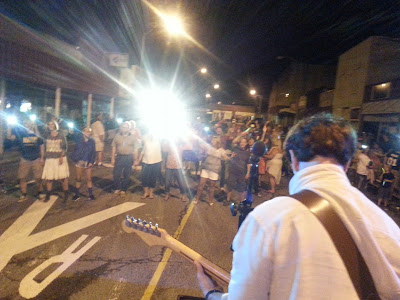 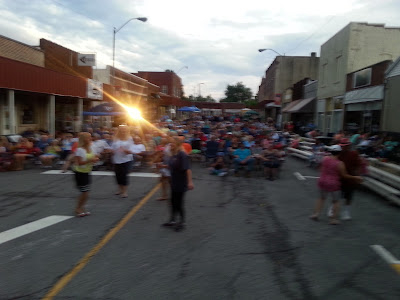 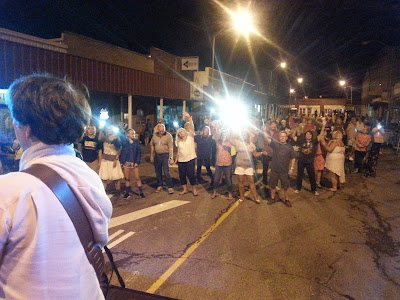 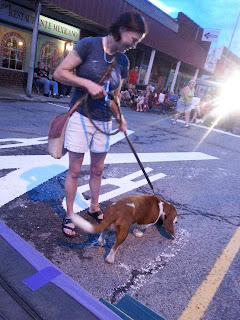 But the most memorable part of the show was the part we didn’t expect at all: a freight train running through its usual downtown route, while we were singing one of the softest songs in our show, “Yesterday.” 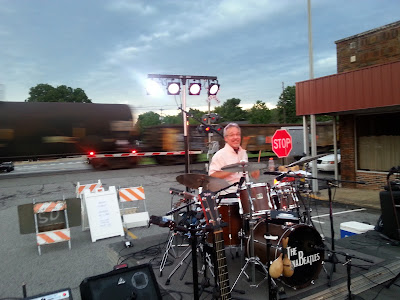 David had the alertness to document the moment as a video, which he captured on his cellphone.

We posted it on Facebook.Dennis, with comic understatement called it a “poignant moment.”
Here’s the link:
https://www.facebook.com/thewannabeatles/videos/10153560858286805/

We’ll never forget our encounter with that Mystery Train that roared through downtown Portland, Tennessee that night, connecting us, in one surprising moment, to the soul of America.

Posted by The Wannabeatles at 7:17 AM